Marty has had a good week, which I think is a combination of nice weather and the days getting longer. I was already aware that winter is his worst time, particularly in these early, gloomy months of the year, but Ben pointed out that his poor behavior coincides very closely with the clock change. Is this because he isn’t worked as often during the week when the days are shorter? Is it because his routine, such as it is, changes by an hour and he finds it intolerable? Or is it simply coincidence, and my mule is just a grouch? I’m willing to bet that it’s all of the above.

It’s shedding season, and that only means one thing – time to be a werewolf! 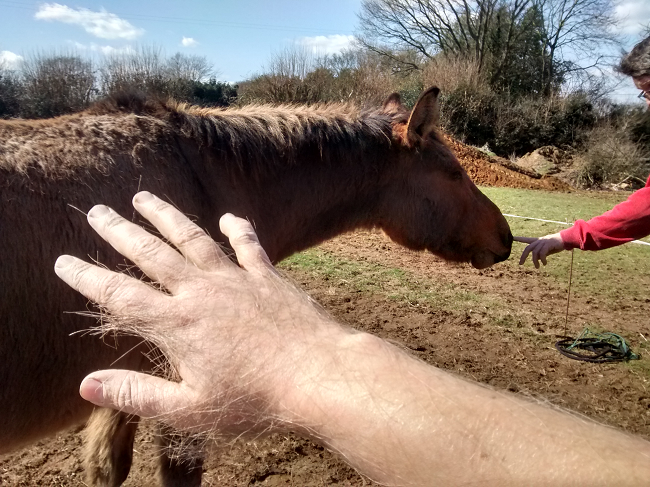 On Tuesday the horses had an appointment with Celina Harrison, who came out to see Marty a few weeks ago. Ben had taken the morning off, but I was there to bring Marty in as well since he’s not very good at staying in a field on his own.

Since Ben was leading both horses, Marty and I played gatekeeper on the main five-bar gate out of the field. The middle of this gateway contains a deep, muddy puddle. I asked Marty to stop and wait while I went ahead to unlatch the gate, then I asked him to back-up by sending a slight wiggle down the rope. Once clear of the puddle, I asked him to move over and we waited, holding the gate, while Ben took the horses through and into the yard. Then it was back-up and move over again, and a wait – with the horses now out of sight – while I closed the gate. It was unexciting, but I was really pleased with how easy it had been. I like easy. Easy is good. 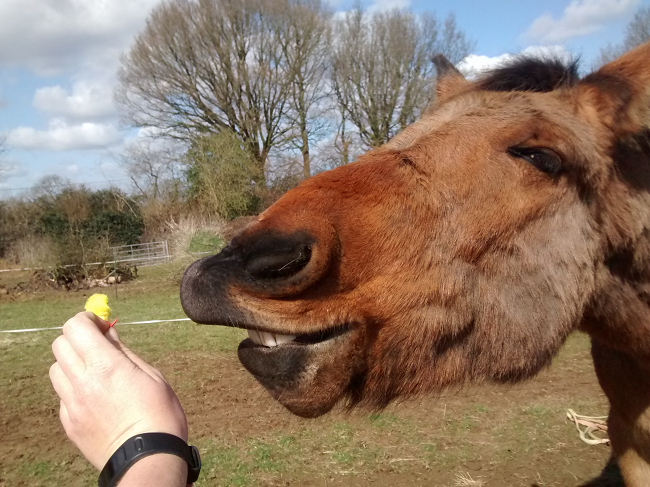 I had to remeasure Marty for his sidepull bridle, as I’d got confused about the instructions earlier and omitted some key measurements. These included his poll and browband, so I was really pleased with how good he was about letting me measure them! Considering that this is the mule who has known issues with his poll area and used to fling himself around like a salmon on a line if I so much as looked at it, it was incredible to be able to do something so simple as reach up and roll a tape measure behind his ears.

He remembers this trick, although Cash thinks that Cash ought to be rewarded too. It’s hard work being a prop. 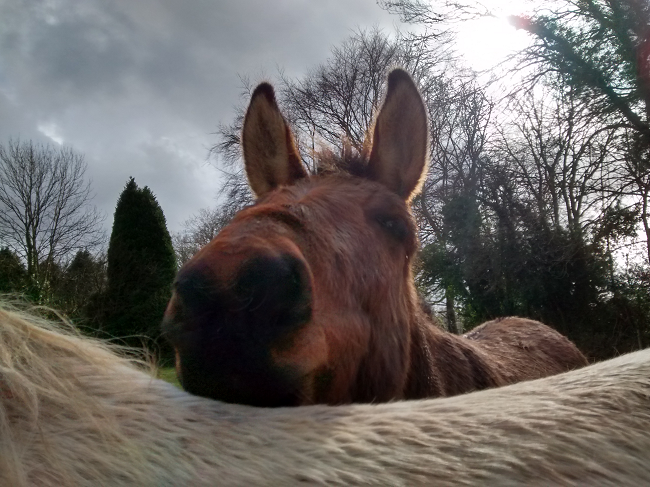 On Friday, it being a Bank Holiday, I took Marty out for a walk into the village and back with Ben on Iris. He seemed to be quite nervous heading out, and I was disappointed; I’d hoped that having Iris for company would help him. He spooked a couple of times before leading the yard, was a bit goggle-eyed at some things on the lane (damn invisible pixies again), and was even a little strong to lead and slow to whoa (he never tried to go anywhere, but there was more weight on the rope than I like). 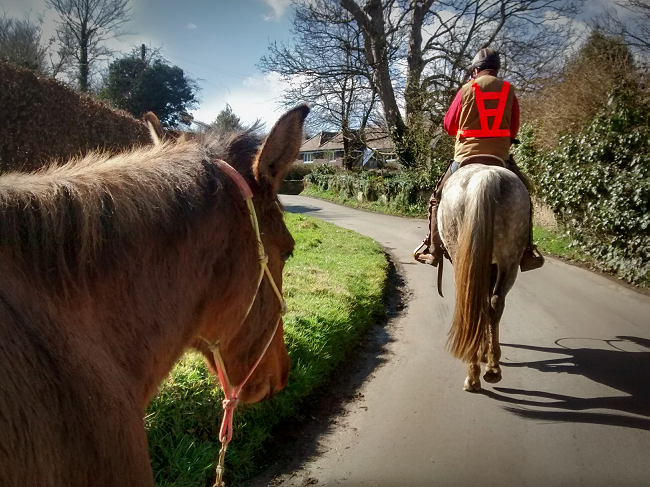 However, we passed a family and their four dogs without issue, and although he stopped to look back when they began to follow us he remained calm and he settled quickly. We also had an encounter with a Morgan Three Wheeler on a narrow part of the lane (ha! What am I saying, there are no non-narrow parts), which was quite an education I feel. He skittered a little as it drew level, but nothing serious.

We did a loop round the green and headed back … and the instant we passed that half-way point, Marty’s energy immediately came down. In fact, he began to dawdle. I was in no hurry myself, although I made sure he kept up with me, and the gap between us and Iris soon began to grow. At one point, Ben and Iris went round the corner and out of sight while Marty and I stopped to chat to a car driver who wanted to ask about him.

Not so much here. 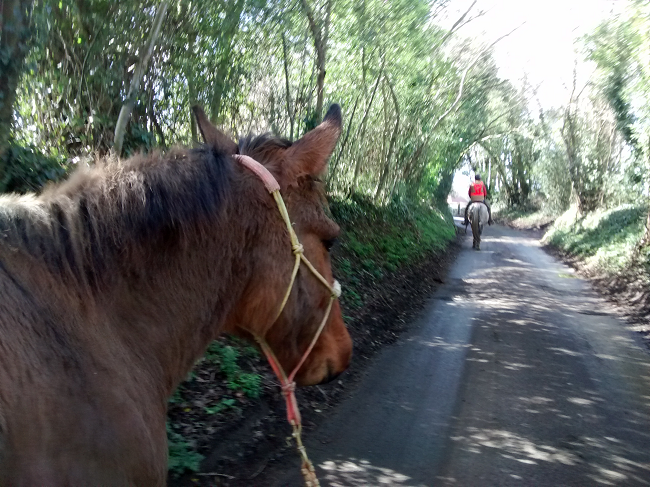 I was quite perplexed by this, as his anxiety on the way out – or what I’d taken to be anxiety – had meant that I’d assumed he would want to rush home. After speaking about it with a few friends, the unanimous response was that what I’d perceived as worry had probably been excitement.

It’s interesting how I could misread something like that, but I think that it comes down to what I’d expected out of Marty – as far as I was concerned, our days of enjoying walks were behind us and it was highly unlikely that he’d be keen to get out, so I simply didn’t see what he was telling me. Kate Sandel wrote about this in a recent blog (I highly recommend you read all her blogs if you haven’t done so already, she’s a very funny writer and a very insightful horsewoman) – I should have taken her advice “that the easiest thing to do when you meet them each day is to have no expectations and predict nothing about what’s going to happen”.

He finally got to exchange sweet nothings with Xefira, aka the love of his life, too. Then he remembered Iris was watching and had to tell Xefi off for leading him astray. 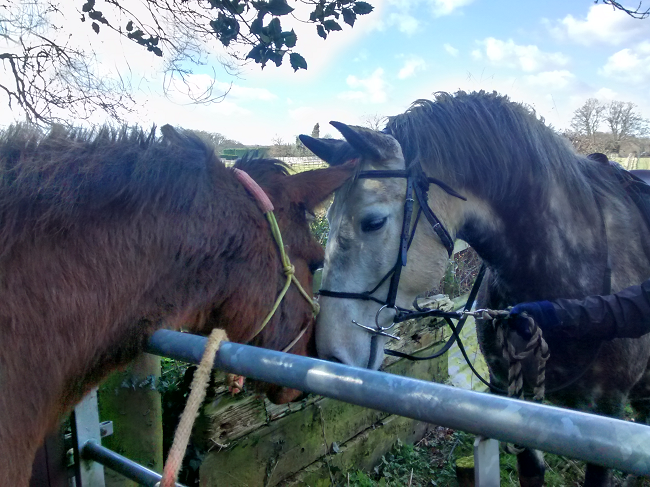 The rest of our weekend has been a literal wash-out, but as we’ve been moving between fields – they go into the new paddock for a few hours during the day, then back to their old field at night, in order to gradually introduce them onto the fresh grass – it means he’s had to be caught twice daily. Caught twice, in the rain! And he’s been haltered straight away every time.

Anyway, now that I’ve just bragged massively on my mule, look out for next week’s entry when I’ll almost certainly be writing about how he’s well and truly put me in my place.

Marty! It’s not funny, young man. That was a very mean thing to say about Cash. He does not look like Boris Johnson. 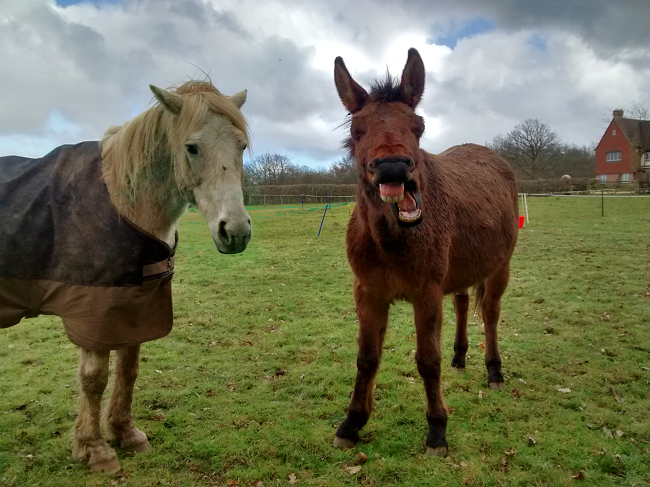