Given that my culinary skills are approximate with that of a rock, this is a pretty weird post for me to make. Don’t worry, recipes will not be a common theme – there are only so many mule-themed foods, after all!

A couple of weeks ago there were a few mule and hinny questions on University Challenge. I know about this because my mum messaged me to tell me that she’d answered them all correctly – I was very proud! One of the questions was:

What term denotes the hybrid offspring of a donkey and a stallion, the same word by a different etymology appears in the name of a bannock or griddle cake in North East England?

I had never heard of a Singing Hinny before that, but was delighted to find yet another tenuous link to my mule obsession. In this case, ‘hinny’ in Geordie slang is a term of endearment for women. It means ‘honey’, essentially.

A Singing Hinny is like a Welsh cake, but of a more scone-like consistency and less sweet.

What do I need?

I’m allergic to cow dairy and disliked some of the ingredients, so I altered the traditional recipe to suit my own needs.

If you prefer to be more traditional, then you will want to:

The butter / lard / baking block must be very cold but not frozen! I theorised that meant colder than fridge temperature, so weighed out what I needed and popped it in the freezer for a couple of minutes while I did Step One.

I made 21 Hinnys using this recipe.

Step One
Mix together the flour, salt, bicarbonate of soda, and cream of tartar in a large mixing bowl. Don’t underestimate the size of the bowl you need like I did.

Step Two
Retrieve the butter and baking block from whatever Arctic region you’ve stored it in and cut into tiny cubes. Drop these into your mixing bowl and rub together with the flour mixture until the whole thing has the consistency of sand. This is extremely tedious and to be honest I probably could have put it in the blender; but then, if you have mules, you will know all about tedium and will no doubt already have a lot of patience for such tasks.

Step Three
Add your dried fruit, mix it in, and then gradually add your milk until the dough is soft and malleable but not too sticky. Many Singing Hinny recipes suggest only needing a few tablespoons of milk, but I ended up needing to add a lot more than that. I was up to 10 tablespoons before I got a bit carried away and then had to add a bit more flour to balance it out. Then a little bit more milk. You’re getting the picture.

If you’re the kind of psychopath who enjoys lemon zest, this is the stage where you’d add that as well.

Step Four
Roll out your not-too-floury-or-too-milky dough and use a knife or a cookie cutter to make your Hinny-but-not-hinny shapes. I did not have a cutter so I used a small pot which looked roughly the right size but honestly, I’m very bad at measurements. As with most aspects of my life I just hope for the best.

Step Five
Heat up a griddle pan and grease it lightly – I just used a little butter here, reapplying between batches. Add your Hinnys (I cooked five Hinnys at a time because that’s what my pan could comfortably hold) and cook until golden brown on both sides.

A Singing Hinny is best enjoyed warm and with butter, but I also really enjoy them cold the day after cooking as well. We had them as a delicious pudding of Singing Hinny, (vegan!) squirty cream, sugar, and freshly-picked blackberries! I found them quite filling and a little stodgy – which may be my bad cooking – but as such they make excellent hiking snacks. They don’t last well so eat ’em quick. 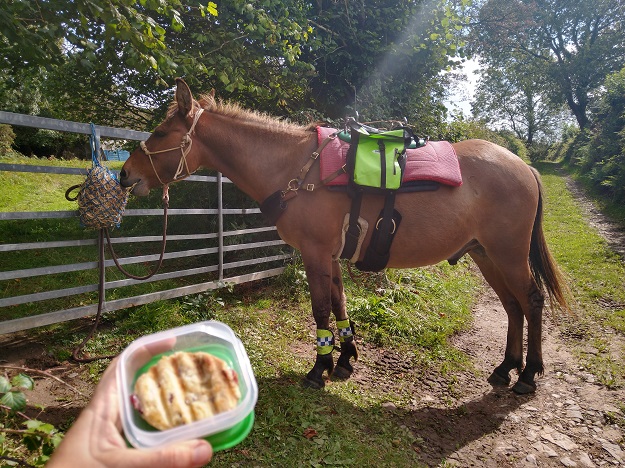