Marty was noticeably happier today. Perhaps being able to handle yesterday’s situation so well was a much needed confidence boost for him?

Instead of flinching and bracing and being worried about the halter, he came straight up to me and stood calmly when I put the halter on. He was eager to come in, eager to go out to the arena, and set to work with enthusiasm. Ben was riding Iris in the arena at the same time, and I was really pleased to find that Marty was able to completely tune them out and focus on me instead while we were working. He was more than happy to keep trotting on a circle in the middle of the arena while Iris trotted or cantered past in the opposite direction.

I wish I’d filmed it now, because he was doing so good at following my energy and being with me. I love it when I can influence his speed just by changing the amount of energy I put into my walk! Or when we’re standing side by side and I can reach out and feel this almost tangible connection between us, and he reflects me by moving off the instant that I do. I’m sure I’ve talked about this before. I’m a bit of a nerd about it. It’s just so cool. 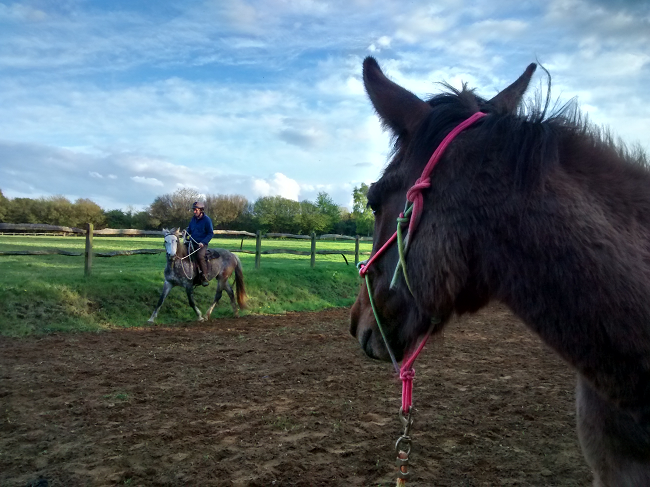 He’s also doing brilliantly at trotting next to me while I run. I remember when this was a hugely difficult thing for him! Today I was testing to see if he would come with me if I went from standstill to a run, and he did every time. Although once or twice he might have got a little bit overexcited and started bucking … the funniest of these was when he kicked some sand which hit the fence and then bounced back and hit him on the hock. The look on his face was priceless. He was deeply offended.

End of session snack time in the last light of April. 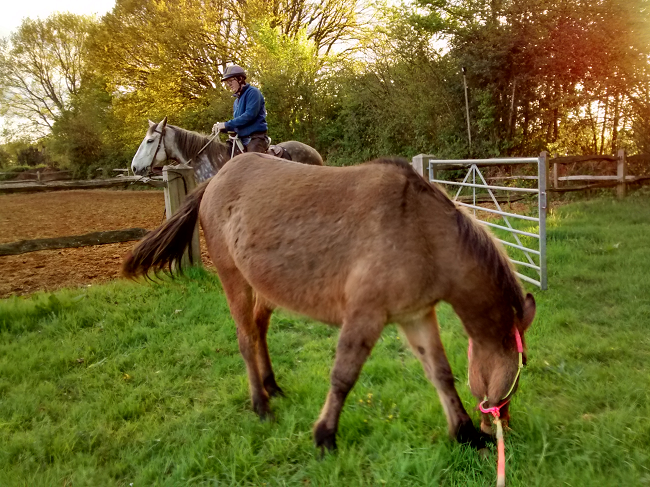