Three weeks ago Marty and I encountered a couple of loose dogs, this time barely a few metres from our yard gate. Since the Punchbowl Incident his dog phobia has not gone away, despite my various attempts to understand and deal with the trigger, and as my own confidence has been affected all our off-property walks have been restricted to just going down to the village and back again. If we do meet a dog there, then it is more likely that it will be on a lead and therefore hopefully under control!

The lane we go out on is a single-track hollow way, with trees lining the high banks and their branches interweaving overhead to provide a leafy roof. It is very picturesque, and the only downside is that – due to its narrow nature – it doesn’t give you much space to pass a scary object, or to be able to disengage an in-hand mule if he decides to leave.

I don’t have any relevant photos, so here are some unrelated pictures from the field. 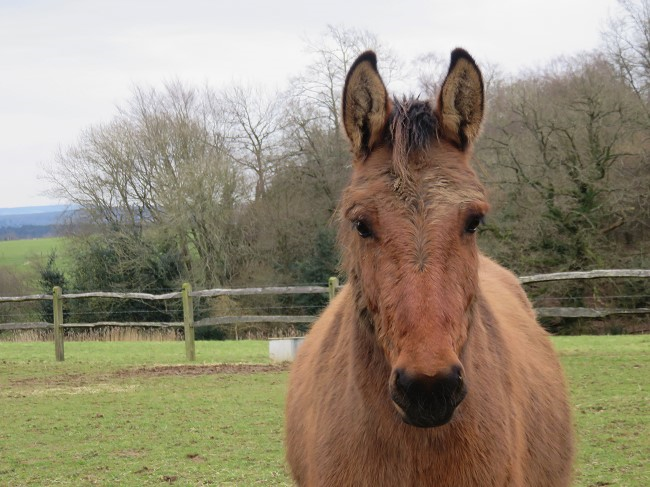 On the corner is a gateway into a set of fields that serve as grass livery. On this particular day the gate was open, and a couple of dogs – very much like the ones we met in the Punchbowl! – were roaming around in the entrance. Marty saw them before I did and alerted me to their presence with 12 o’clock ears.

They noticed us a second after we saw them and immediately ran towards us, barking. Marty did the mule freeze and I knew he was primed to run. The dogs were wagging their tails as they came and probably wouldn’t have hurt us, but in Marty’s mind they were clearly fearsome wolves and so I stepped forward and directed a huge burst of furious energy at the loud-mouthed mutts. How dare they frighten my boy!

It did the job, as the dogs immediately stopped and stood there, looking uncertain and even a little submissive. They both backed off, and after a moment Marty stepped forward of his own volition in order to stand by my side. He was definitely not happy; once or twice he turned his head and put pressure on the rope, wanting to leave, but it didn’t take much for me to bring him back and he never actually tried to go anywhere. No one had come to reclaim the dogs, so we were stuck in a bit of a stalemate. I didn’t want to take him past or turn him around as both options would have risked them coming at us from behind. He was being so good and I absolutely did not want this to go badly when I was so close to showing him that he could be brave!

Iris is very good at keeping watch, allowing the boys to do boy things. 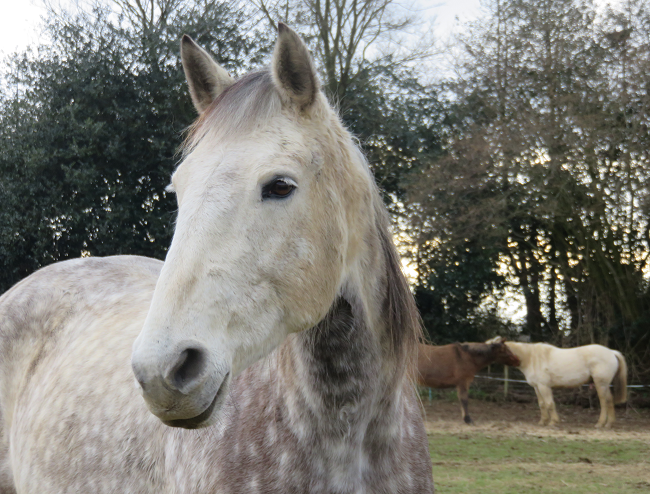 Once or twice the dogs made a half-hearted move in our direction, and I would counter with a heavy step and a growl towards them. Each time Marty came forward without needing to be coaxed. His energy was beginning to feel more curious and bold rather than the all-out anxiety he’d been radiating moments earlier, and I was tempted to lead him right up to them. When we’ve met leashed dogs and the owners have been kind enough to stand and wait and allow Marty and I to work on his fear, I haven’t wanted to let him get too close as it would be quite rude if my mule suddenly decided to attack the poor dog! That is what mules and donkeys are known for, after all. That being said, I do feel that if you are going to leave your dogs loose to roam and do not investigate or call them back when you hear them barking out on the road, then I can not be held responsible for any damage caused.

In the end I chose not to do this as I felt it risked overloading him. He might have found it helpful, but it could equally have terrified him and ruined the foundation we’d just started to build. 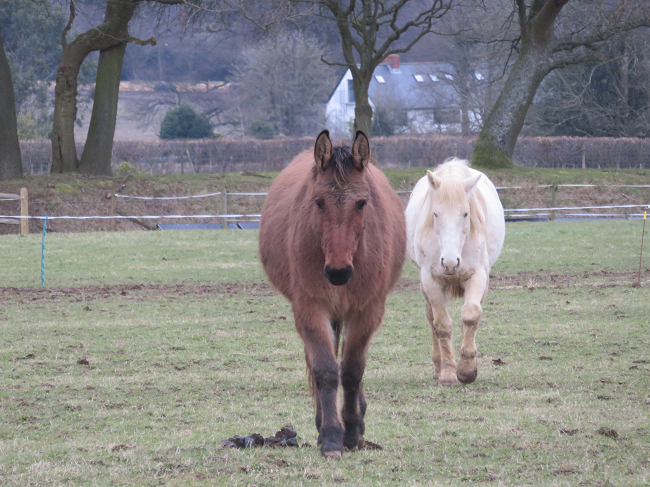 Our problem was solved when the dogs eventually realised I was not going to let them play and they slunk back from whence they came. I turned Marty round and walked him towards home, but I took him past our gateway as I didn’t think going straight home was the right course of action. I continued up the lane until I felt his anxiety lessen and felt like he was properly tuned into me – I was able to slow my feet right down and, although he wanted to rush, he kept the slack in the rope and walked elaborately but slowly next to me.

I turned him for home again and a car came down the lane behind us. I walked him at first, but as it’s single-track I began to jog so that we could move out of the way quicker and Marty instantly came up with me. Considering that he’d just had a fright, had really wanted to run away, and we were now trotting towards home and safety – even then, the slack remained in the rope and he never once pulled, or bucked, or tried to go any faster than I was. I felt like that was pretty good.

He dropped back down to walk without issue, but didn’t want to stand still when we reached the gateway so we did a little bit of practice on that. Once he was listening to me again we went back to the yard where I groomed him with his favourite brush, then hand-grazed him for a few minutes before returning him to the field.

I feel like all in all it was actually a very positive experience for us. He is still nowhere near over his fear, but that day showed him that I could and would look out for him, and it showed me that my mule is truly outstanding. He definitely has a lot to give if only I can find the key to unlocking it.