Did you know that it was National Storytelling Week this week? Run by the Society For Storytelling, the Week is in its 19th year. Its aim – and the aim of the society – is actually to promote oral storytelling, but I chickened out of recording anything. Instead I thought I’d share a bit of written fiction featuring some characters of mine. This is the opening to a story called The Quicksilver Forest. 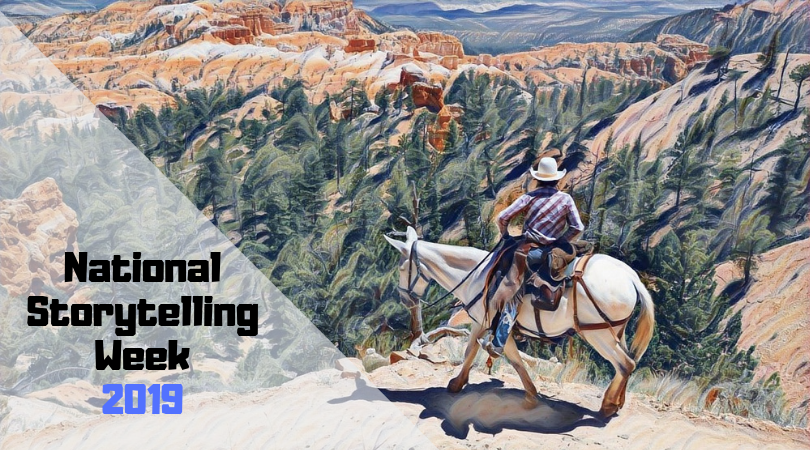 The cat had been a bad idea.

Finn Vermoiden considered the gently oscillating creature above him, his chin sunk into his scarf as he thought through his options. His mule, jet black and long-legged, had one ear turned towards the apparition; there wasn’t much that bothered a Vermoiden mule, and this one greeted most things with polite curiosity. Its other ear sagged outwards, occasionally flicking back towards its rider whenever Finn sighed or shifted his weight.

“Come here, cat,” said Finn, after a few minutes. “That’s a command, by the way.” The small ball of darkness continued to revolve in mid-air, occasional pulses of energy stuttering outwards as it tumbled serenely from one plane of existence to the next. Finn waited patiently and then, in a flash of inspiration, added: “Please?”

A black line stretched towards him, momentarily taking on the shape of what appeared to be a cat’s paw, before it was quickly retracted into the dark sphere. Finn scowled.

“I command you by, er, the powers that are vested in me by…”

The rotating black hole that had once been Finn Vermoiden’s cat buzzed again, and this time the mule turned both ears towards it.

“…oh I don’t know, just come down, for goodness sake.”

The staccato buzzing began to coalesce into one long, rising hum. Finn cocked his head, mouth open as he squinted at the object before him. It was starting to separate into hundreds of tiny black shapes.

Finn had time to contemplate his recent choices as the mule carried him swiftly across the sagebrush desert. Small shrubs and larger boulders hurtled by, deftly avoided by the mule who ran with the consistent locomotion of one who had calculated exactly how far they needed to go and how much energy they needed to do it. The only sounds were the slowly dwindling roar of the swarm and the mule’s steady hoof beats as the terrain beneath them changed from sand to rocks and back again. He couldn’t have stopped the animal even if he’d wanted to; Vermoiden mules were smarter than people, his father often told him – certainly smarter than Finn – and could generally be relied on to recognise danger and remove themselves from it post haste. If the mule was running, Finn had better stick with him. His father had drummed that into him since he was very young.

It was his father who Finn was thinking about now. Charles Vermoiden disapproved of a lot of things, and when Finn had come home two weeks ago with the cat under his arm, his father had not been enthusiastic. Buying magical creatures from strange men in pubs was at the top of Charles’ disapproval list, along with malignment of mules and improperly stored tack. Charles was extremely fond of his mules.

The mule’s relentless gait suddenly slowed and then dropped back down to an easy walk. Finn squeezed the reins with a finger and the mule came to a halt, bit jingling as he worked his tongue.

“Thank you, Isaac,” said Finn, glaring at the indifferent black ears. Knowing that the mule had probably saved his life didn’t make the adrenaline any less potent. “Very refreshing.” He twisted in the saddle, placing a hand on the cantle as he peered back the way they’d come. There was no sign that the cat had followed them.

That was that, then. He briefly considered riding back to try again, but by this point he had been out for several hours and he knew, deep down, that he had lost control of the creature. The only person who might be able to quell it was the last person he wanted to know about its escape – his father. Finn sighed, slouching down in the saddle and urging the mule on again with a light squeeze of his legs. They would walk the rest of the way home. Turning up with a hot and tired mule would not help his cause at all.

Dusk was falling as Finn and Isaac turned up the long, straight road to the Vermoiden family home. The grey sand seemed paler in the slowly gathering half-light; the mountain ridge, which jutted cliff-like from the flat valley floor, loomed darkly against the smudged sky. Finn had been riding with his hands tucked inside his jacket, reins laying across the mule’s neck, but he picked them up again as they came into view of the mansion. They made their way through the iron gateway – open as always – and followed the line of the outer wall round to the stables. A mule brayed a welcome and Isaac, treacherously, responded with a shuddering rumble that shook Finn in the saddle. Finn was certain that one of the main reasons Charles had fitted all his children with mules was because it was impossible to sneak home with one.

The stables were unlit when Finn reached them and he dismounted quickly, leading Isaac over the threshold. He noticed the softly shining mark on the doorframe a second too late.

There was a low pop, like a sudden decrease in air pressure, and Charles Vermoiden appeared behind them. Isaac stopped immediately.

“Dad!” Finn exclaimed, tripping over his feet. He straightened up and tried to look nonchalant. “I … thought we weren’t allowed to manifest in the house.”

“You’re not,” said Charles, calmly. “I am. Besides,” he added, after a moments contemplation, “we’re not in the house, are we, Finn?”

Finn said nothing as Charles walked past him, running a hand over Isaac’s glossy black coat. He was not a tall man, although his posture and bearing made him seem taller than he was. His eyes, like Finn’s, were a luminous blue that glowed against weather-worn skin and his neat hair and moustache were dark grey, streaked with white.

Apparently satisfied in his perusal of the mule, Charles stepped back and regarded his son over the saddle.

“Where have you been?”

“You lost it.” Charles closed his eyes for a moment. “That cat,” he said, quietly, “should not be running around in public.”

“It was more flying around, when I last saw it,” said Finn. His father’s piercing stare flustered him and he added, “It was a bee. Quite a lot of bees, actually.”

There was a long silence, broken only by Isaac who began rubbing his nose on his foreleg.

“Put that mule away,” said Charles, at last. “Find me when you’re done.”

Finn was left alone in the growing dark, his mule lipping hopefully at his coat sleeve. It had not been a very good day.