I recently stumbled across a collection of essays entitled “Frontier Army Life”, by James Steele. His chapter on army mules is hysterically funny. It seems to me as though Steele encountered a lot of Martys during his army days! I’ve picked out ten of my favourite quotes for your enjoyment.

“He has in his movements a peculiar jog-trot, which in itself suggests careless and irredeemable depravity. It is the gait of one who steadily goes to the bad, but never quite gets there.” 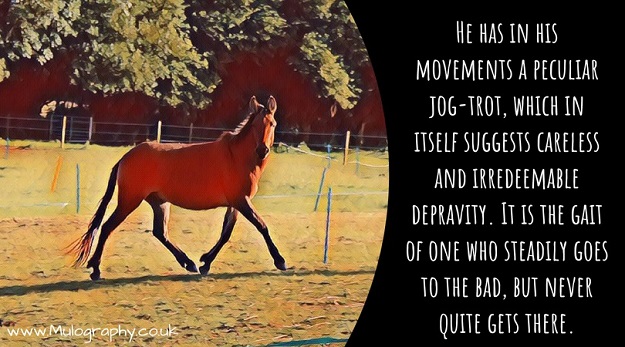 “The yearling mule is undoubtedly the incarnation and sum-total of quadrupedal deviltry. He is the originator of a distinct and uninterrupted series of grotesque diabolisms.”

“[The army mule] stands alone in his nature and qualities, unapproachable in devilment, fathomless in cunning, born old in crime, of disreputable paternity and incapable of posterity, stolid, imperturbable, with no love for anything but the perpetration of tricks, no dexterity in aught save the flinging of his heels, no desire for anything save rations – stolen if possible and by preference – and no affection at all. Such is the mule.”

“Even as he stands thinking, against the sunny side of the barn, [his ears] are ever moving – now backward, now forward, and in opposite ways. You can tell by these tokens almost the moment when an unusually malevolent idea is born within him.”

“Men whose labours in this life have taken the strange direction of mule-raising, are supposed to lead short lives and troublous ones.” 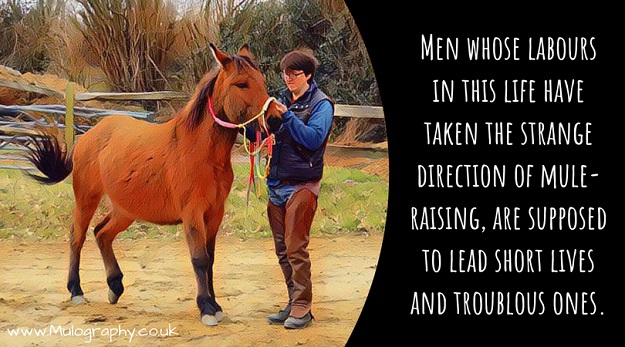 “A mule by himself is the wretchedest of beasts. He may not be so very particular about its quality, but he must have company; companions to tease and torment, to bite and kick and steal from, and over whose backs he can rest his intelligent head to stare at the passers-by.”

“It is not asserted that anyone quite understands him, or after many years of association with him is able to tell precisely what he might not take it into his long head to do.”

“Place twenty of [these young mules] at a long trough, feed them liberally with oats, and it will be more from luck than prudence if he whose duty it is to give them provender succeeds in getting out from among the shaggy conclave with less than twenty of the forty hooves having been flung in his face.”

“Is there a more pitiful spectacle than a stalwart mare, whose ears are clean-cut and sharp, and whose veins stand out over her glossy skin, looking affectionately over her shoulder at the little dun-coloured, fuzzy, impish monstrosity who tugs at her udders? One would think that she would run away and abandon it to starve – if, indeed, a young mule can be starved; or make it convenient to lie down upon it. But she never does, and it goes far to show how poor judges mothers are of their own children.”

“He is docile and devilish, tricky and faithful, never requires to be broken and never is broken, is always in difficulty and is never injured, is reckless of any and all consequences and yet is exceedingly cautious.” 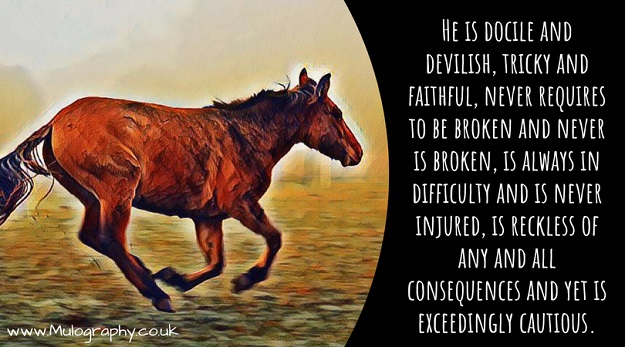