While collating my Welsh mules in the news post back in February, I came across various stories about mules abroad as well – usually related to wartime efforts and not, I’m afraid, entirely pleasant reading.

Although some of these stories are a bit grim, I admit a kind of morbid fascination with them and the windows they provide into a different time. There are some small acts of kindness amongst the horrors and, even if that kindness is ultimately futile, at least there was someone who cared.

“Did you ever hear of a ‘gatored’ mule?” asked Mr. William G. Thompson, of New York, who is on his way home, after a year spent in Florida for his health (says the Washington News).

A gatored mule, as he is called in Florida, is one of that stubborn race which has been driven partially insane from an alligator fright. In fact, while a mule will stolidly wait to be thrown off of a railroad by a locomotive before he moves, he goes into a wild state of terror at a single glimpse of a saurian monster. “There are hundreds of ‘gatored mules’ in Florida. To tell the truth, I helped to ‘gator one myself. How did it happen?

“Well, I had been staying at Ocala some weeks, and finally agreed with several friends to go hunting in the south. About twenty miles from town we located upon a small stream abounding in game. After pitching camp I went for a walk, and before long found a ‘gator hole. From the strong, musty odour which issued from it I knew that the owner was at home.

“Calling my companions, I decided to capture him. We rammed a long pole into the burrow several limes. Finally we heard a snap like the report of a gun, and the pole remained fast. The ‘gator had seized. We tried vainly to pull him out. Then some one suggested that we use our camp mule. We shouted. The mule was led down to the hole, a chain fastened to the pole, and then the frightened animal was started.

“There was a creaking of chains, a roar, and the alligator, fully 7ft. in length, came out with a rush, as the mule started on a wild run for the road. The saurian’s teeth were sunken so deeply into the wood that he could not release himself, and away went mule, pole, and all. The alligator spun around, hissing like a steam engine, but he held on, while the mule, thinking himself pursued, snorted and ran. We followed. Into the main streets of Ocala flew the mule and his queer load. Completely exhausted he was stopped by a party in front of the post-office. The ‘gator was dead. We skinned and stuffed him. The mule recovered, but the sight of a swamp now throws him into a perfect frenzy of terror.”

Commentary: well that was a fairly horrible story! Why do blokes have to do such awful things for no reason other than pure whimsy? Ocala, by the way, is a city in Florida.

An interesting story has been told to a Preston reporter by Chief-officer Smails, of the Mrytledene, a steamship which has arrived at Fleetwood after an adventurous voyage in the West Indies. The vessel reached Havana just before the war was declared with a full cargo of coal from Philadelphia. After being in the harbour three or four days Captain Melburn and two engineers went for stroll on shore. Unsuspectingly they passed over fields where mines were laid, and got within close range of the Spanish forts. Several sentries pounced upon them, and the surprised sailors were promptly conveyed to one of the forts,where they were accused of being American spies. Heedless of the Englishmen’s explanations, the Spaniards marched them off to Blanco Castle, and thence to Morro Castle, uttering many threatening words, and vowing their intention of shooting them. The day of the caputure was Sunday, and they were imprisoned for the afternoon in the Castle, where, the chief officer stated, they were fairly treated. The mate of the ship informed the British Vice-Consul of the occurrence, and their release was secured. On the night war was declared, the Mrytledene left Havana for Cardenas, taking on board the British Vice-Consul’s wife and family.

With a smile Chief-officer Smails related how the Americans boasted that the Spanish forts been bombarded at Cardenas right and left. “But,” he added, “the Spaniards had far the best of that fight.”

Describing how he afterwards went to Matanzas, Smails was questioned as to the story of the memorable Spanish mule, which he described as being quite true. “I went to the funeral of that mule,” he added, “by the special invitation of one of the Spanish stevedores. That animal was buried with more honour than is usually granted a Spanish soldier. Full arrangements for a military funeral were made. Nothing was lacking. There was a detachment of the Regular Militia, the Volunteers, and the Marines. Altogether there would be about 200 persons present, including many distinguished officers. They all walked in mournful procession to the final resting-place of the ill-fated animal, a band rendering melancholy music all the while. The authorities were also present to give the obsequies an official aspect. At the grave more appropriate music was played, and eloquent addresses were made by Spanish officers. These were interpreted for my benefit. They spoke of the horrors of war, the terrible effect of the American fire, and the great loss they had sustained in the death of the mule. Then the signal for lowering the carcase [sic], into the earth was given. The body went down enveloped in the Spanish flag amidst a volley of musketry.” The Myrtledene afterwards proceeded to Sagna and Philadelphia, and thence to St.Johns, Canada, where she loaded with timber and sailed for Fleetwood.

Commentary: see below for the “Mule Ghost” story for more on this.

A silly story of the ghost of the immortal Matanzas mule – the solitary casualty when the American warships bombarded Matanzaa- being seen near the spot where it got its quietus while in the flesh, has scared the Cubans in the locality, and not one has the temerity to go near the place after nightfall.

Commentary: during the Spanish-American war, the US Navy fired upon the north Cuban town of Matanzas on April 27, 1898. The only casualty was a mule, which was buried with full military honours and two hundred people in attendance. The date is now a national holiday in commemoration of the lost mule.

That Matanzas Mule: Bombarded And Beatified

The historic Matanzas mule, the solitary casualty (according to the Spanish official report), in connection with the bombardment of that Cuban seaport by the United States Warships three years ago, has been sculptured in marble by a young Andalusian artist. The animal is in a prone position, and appears as though it has just received its death-wound. A mule was shot, and photographed the moment it fell, so as to enable the sculpture to secure the beast’s dying expression. The work will be first exhibited in Madrid.

Commentary: well, I thought that was rather nice until I got to the second-from-last line. I haven’t been able to find any pictures of the sculpture, so I don’t know if it still exists; it’s unfortunate that we weren’t given the name of the artist or the sculpture.

When the large steamship Mombassa was at Cardiff last March she was fitted by Mr. John Rogers, ship repairer, and boat builder, to accommodate 500 mules, which were to be taken on board at Gibraltar and conveyed to the Cape for the service of the War Office. The Mombassa is returning direct to Gibraltar, where she is due on the 16th, and will take back 1,000 mules to the Cape. This necessitates the fitting-up of 500 additional stalls. It is of the utmost importance that no time should be lost in doing this work, consequently the owners of the steamer telephoned to Mr. Rogers from Glasgow on Wednesday afternoon instructing him to send timber and men to Gibraltar without delay to do the needful work. The next day (Thursday) Mr. Rogers had all the timber on board the P. and O. steamer Ceylon in London Docks, and his brother and a number of men left immediately. They will pick up what further assistance will be required at Gibraltar, and be ready to start work directly the Mombassa arrives. By this means they hope to get all the work done in about four days. This is a highly credible example of Cardiff enterprise. 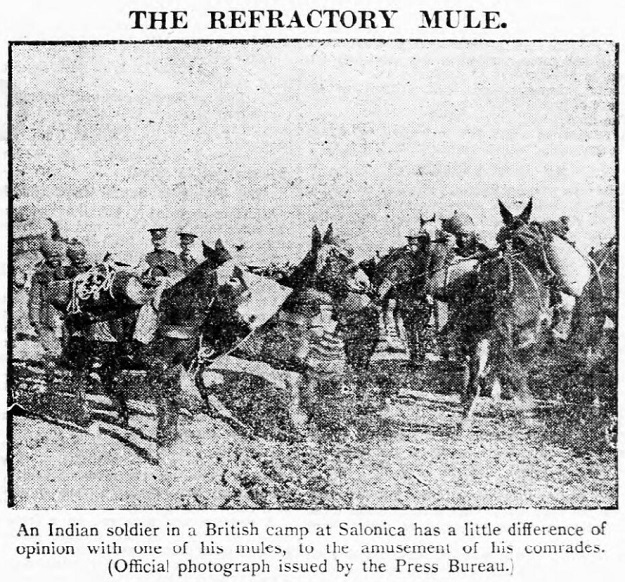 The Old Mule: Privations Of The Kut Garrison

Mr. Edmund Candler, writing from the Front, Mesopotamia, via Bussorah, May 9th, says:- The first tour British officers from Kut (where General Townshend was besieged and surrendered through hunger) arrived here today. All have been in hospital at Kut for periods varying from December 25 to the beginning of April.

The real privations of the garrison began in the middle of February, especially in the hospital. When the milk gave out tho hospital diet was confined to corn-flour or rice water for the sick and ordinary rations for the wounded. On April 21 the 4oz. grain ration gave out. From the 22nd to the 25th the garrison subsisted on the two days ration issued in Jauuary; and from the 25th to the 29th (the day of the garrison’s fail) on supplies dropped by aeroplane.

The troops were so exhausted when Kut capitulated that the regiments who were holding the front line had remained there a fortnight without being relieved. They were too weak to carry back their kit. Daring the last days of the siege the daily death-rate averaged 8 British and 21 Indians.

MULE’S LAST CAMPAIGN.
All the artillery, cavalry, and transport animals had been consumed before the garrison fell. When the artillery horses had gone the drivers of the field batteries formed a new unit styled “Kut Foot”. One of the last mules to be slaughtered had been on three Indian frontier campaigns and wore the ribbons round its neck. The supply and transport butcher had sent it back twice, refusing to kill it, but in the end it had to go with the machine-gun mules. Muleflesh was generally preferred to horse, and mule fat supplied good dripping; also an improvised substitute for lamp oil. The fuel of crude oil used for cooking lasted the whole of the siege. This gave out rank fumes, and the regimental cooks were easily distinguishable, being its black as chimney-sweeps through the smoke and smuts of the oil ranges.

Commentary: this wasn’t a particularly pleasant story either, but I found it morbidly fascinating; the detail of the butcher twice refusing to kill the veteran campaign mule will stick with me. 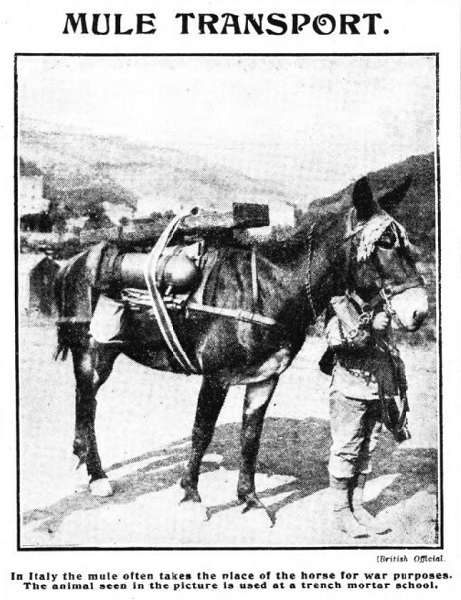