As I mentioned in my second Introducing Xato post, Xanthe was kind enough to take us to meet other mules during our stay in Mallorca.

The first two mules we met were the gloriously spotty Tomeu and Jordi. Xanthe had rescued them as youngsters, brought them on, and had recently rehomed them to a lovely new family. They are both out of the same dam but Jordi is a lot smaller than his brother Tomeu, because the mare was underweight and trying to suckle Tomeu while pregnant with Jordi. Xanthe also said that Jordi was a lot shyer than Tomeu, which I found interesting. He reminded me of a slightly bolder Marty, in fact. I guess that’s a case of nature over nurture! 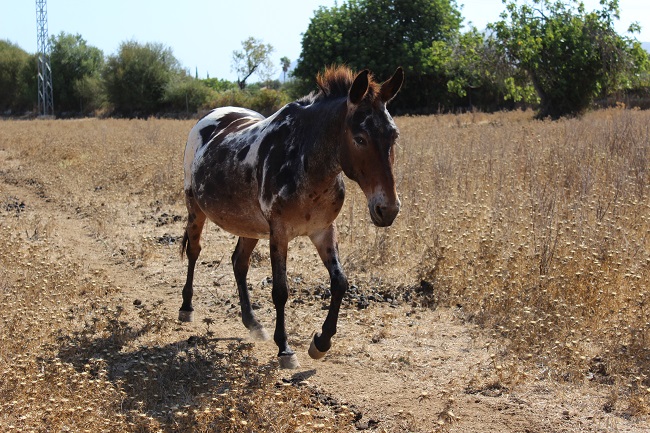 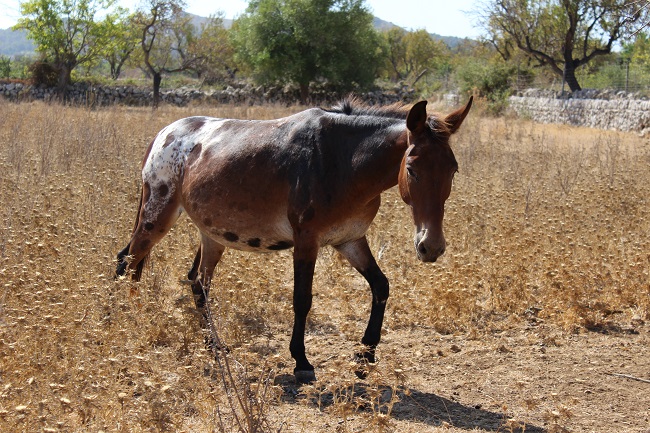 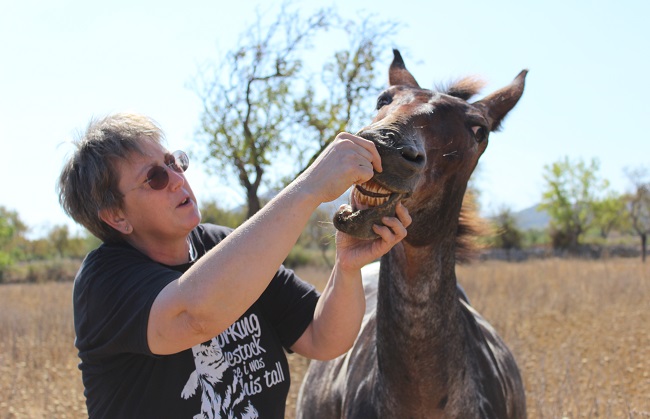 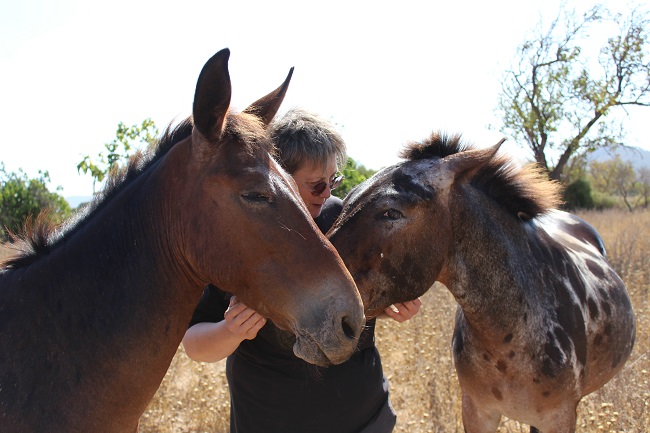 “This is OUR human. You find your own.” 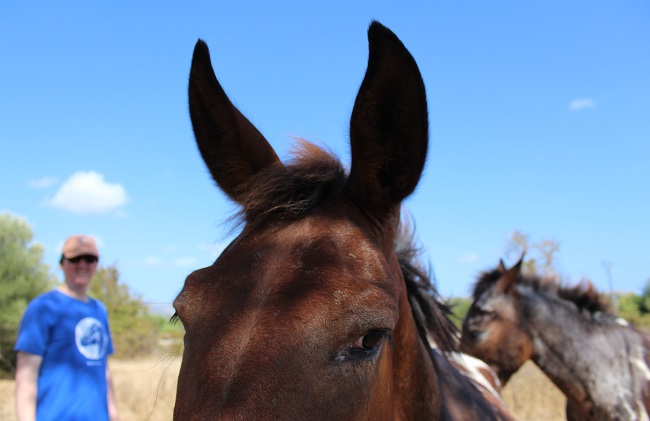 “Hellooooo, I hear you were looking for a handsome mule to photograph…” 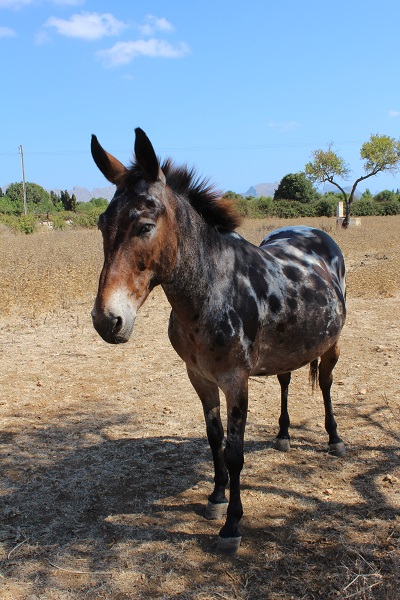 The other mule we met was gorgeous Dolores. She wasn’t sure about us at all, but we were able to admire her from a respectable distance as her owner threw out some tasty snacks for her and the horses who lived with her. Xanthe wrote in a 2011 edition of the IH journal about her work with Dolores:

“I also worked with a mule called Dolores who had a problem with her feet being handled. Whenever she was shod she had been drugged, tied up short, had the foot being shod tied up, wore a twitch and sometimes had her tail tied up. At the end of my project we could hot shoe all four feet with no problems whatsoever.”

“Since then Dolores has changed hands and the new owner … contacted me because he was having a problem putting her bridle on as she was very head shy. I went to see her and she seemed happy to work with me again. She opened her mouth for the bit with no problem but then laid her ears back as flat as possible. I just waited until after a couple of minutes she put one ear forward. I touched it and she did not shy away so I slipped it under the headpiece and went to the other side. The second ear came forward much more quickly and as soon as the bridle was on I took it off and started again. After five or six times of putting the bridle on and taking it off again, Dolores realized she could choose when to put her ears in the bridle and since then there have been no more problems.”

It was so lovely to be able to meet these wonderful mules, all of whom seemed so content: a state of being that I’m sure is down to Xanthe’s fantastic work. I hope she continues with mules once she is able to, because she really is a natural. All the mules (and horses!) thought she was wonderful, and rightly so! 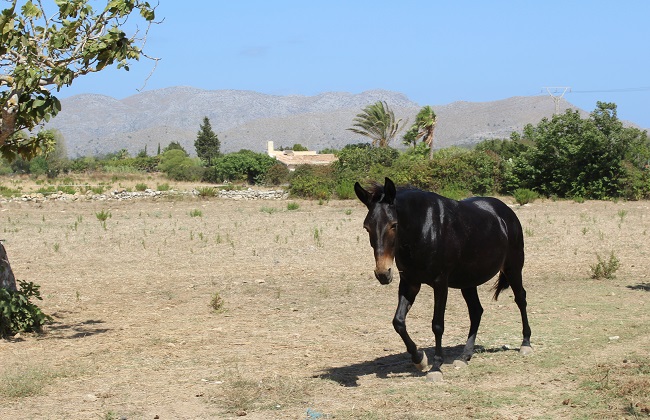 Dolores: a contender for the Shiniest Mule award? 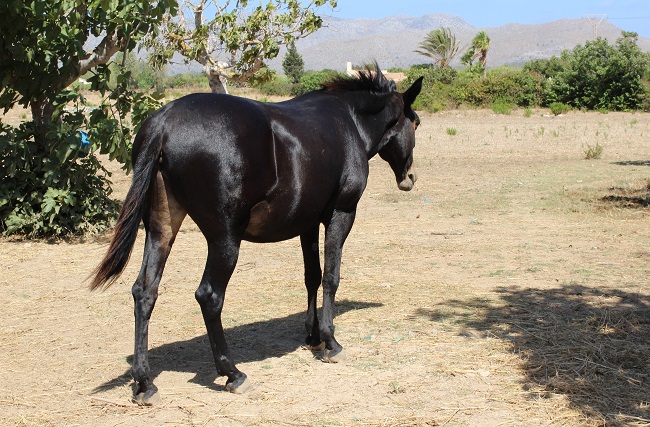 “You’re not any of my humans so I don’t want to talk to you, but you may admire my shiny coat.”

We also made a visit to a friend of Xanthe’s who owns a selection of Iberian horses. Her yard was absolutely gorgeous and I have some serious goals for when I win the lottery (I’m planning to, any day now). The glass-fronted carriage house had me drooling, as did the tack room. And the stables…! As you can probably tell from this blog, I am in favour of horses living out as much as possible, but these stables were very impressive. I wouldn’t mind a few of them, for my mules to stand in and look handsome while they had their dinners… 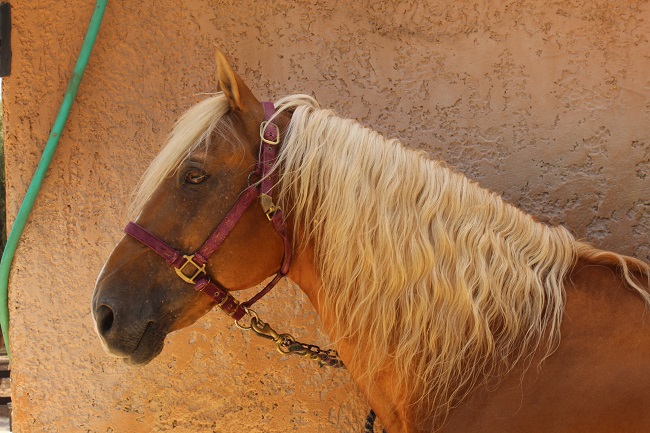 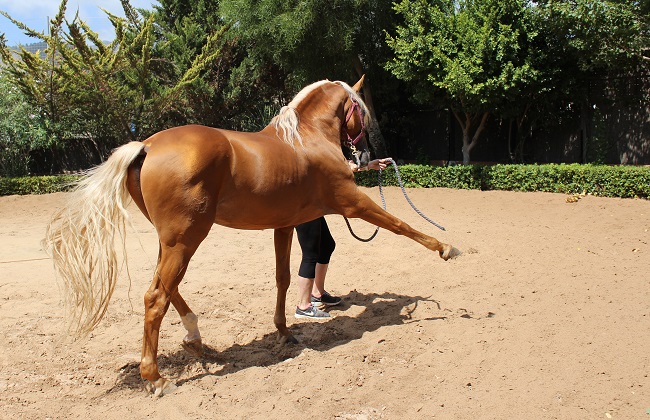 Spanish walk in just a headcollar? Sure, why not.

Also, an interesting piece of trivia for you. Many of the horses were stallions, but we met one Andalusian who had been gelded because his, ahem, masculine spheroids were so large they were making his life rather uncomfortable. The owner said she had preferred to do that rather than ride him in an equine thong. “An equine thong?” we asked, innocently. “What’s that?” Well, it turns out that there is an actual piece of equipment that a stallion can wear to support the aforementioned masculine spheroids while he is being ridden, thus enabling him to perform at the top of his game without any unfortunate gravity-induced side-effects. What a time to be alive! 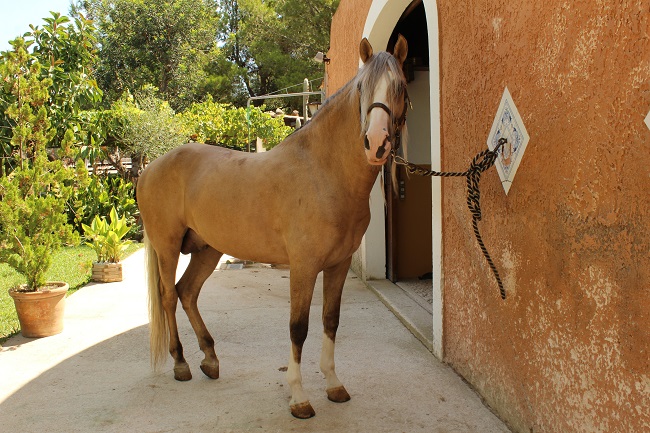 We had such a great time visiting the island. Thanks to Xanthe, our first trip to Mallorca was a truly awesome one. 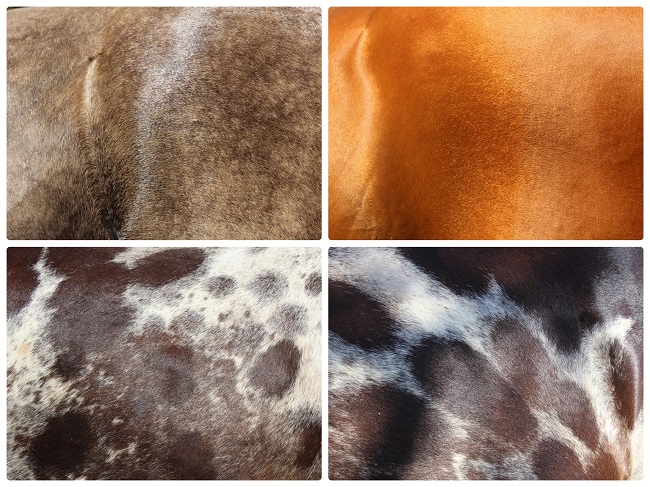 A selection of coat colours. There are three mules – Xato, Tomeu and Jordi – and the metallic copper belongs to a Lusitano stallion. 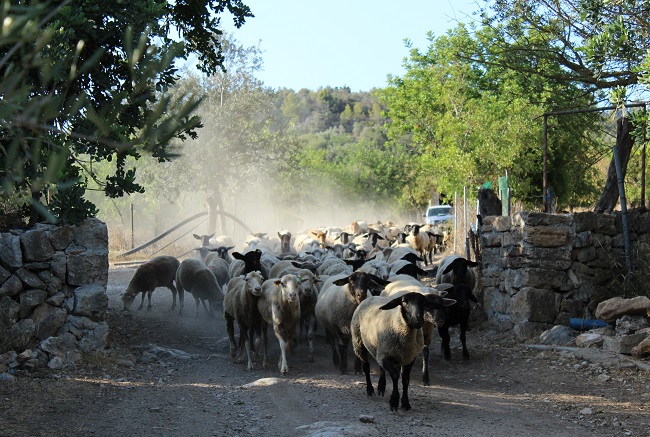 Sheep heading out to pasture at the farm where Xato is kept. Some of them had collars with bells on, which I asked Xanthe about. She explained that some shepherds put bells on all their sheep, but she’d found that if she only put bells on the naughty ones then she knew where they’d gone! Xato once had to wear a similar collar during his younger days! 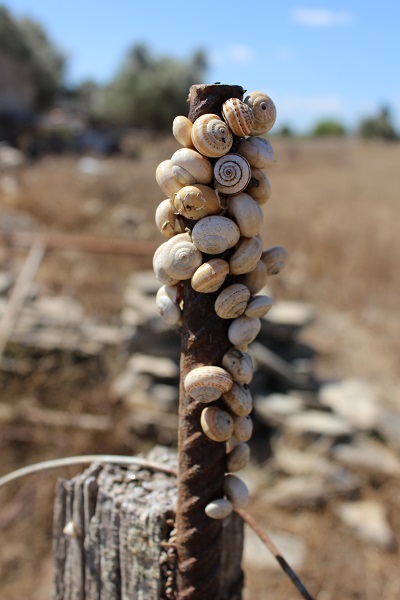 Almost all the fence posts on the track up the farm were studded with snails. Apparently the snails all climb to the highest point – fence posts, trees, telegraph poles – and ‘hibernate’ there for the summer. I thought this was fascinating which is why I’m sharing it with you, even though it isn’t mule-related! Many thanks to Xanthe for indulging my curiosity and stopping the car so that I could take a photo.

1 thought on “Mules in Mallorca”