On Friday, I was able to halter and unhalter the mule within five minutes. He snorted and backed off when I initially tried to bring the halter over his neck, but he didn’t run; and after a murmured word and a neck rub, I was able to slip it on no problem. I gave him a treat and a scratch, then removed it. He stood perfectly and was rewarded with another treat, a good scratch, plenty of praise and a fence move.

A line-up of hopeful equines waiting for their lunch. 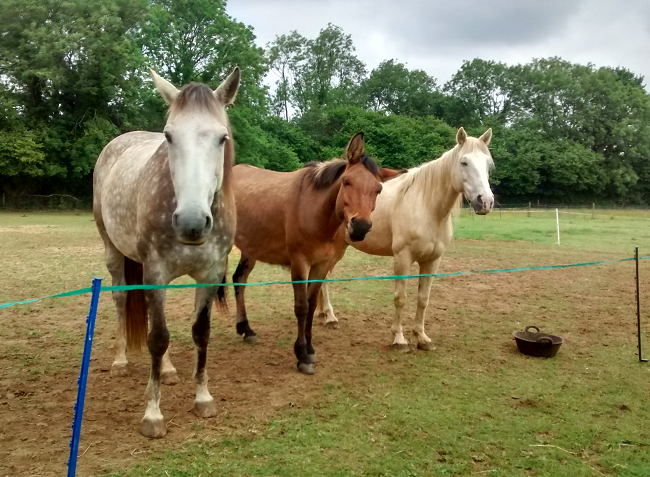 On Saturday, I wasn’t feeling great and had a suspicion that Marty wouldn’t be so good to catch as he had been the day before. There was just a slightly mischievous glint in his eye and I wasn’t in the mood for shenanigans, so I asked Ben to catch him. Marty wasn’t having any of it and he ran around for a while before coming up and hiding behind me. There was a funny minute or so while I played the unintentional role of piggy-in-the-middle, and then Ben passed the halter to me and I was able to catch my naughty mule.

We took Marty over to the arena for a one-on-one session with Ben. Ben’s plan was to do some work using the 20 foot rope. With a knot tied in it to prevent Marty strangling himself, it was put round his neck and used in conjunction with his lead. If he did his usual trick of running out backwards while having his poll or halter touched, his halter would pull tight; this was not pleasant for him but was still, in his mind, better than having anything moving behind his ears. However, the neck rope was something that could be kept moving and so it meant that running backwards was no longer a good option and he had to look for a different answer. Once this was established, it could also be used as another thing to be moved around behind his ears and help to slowly extend his comfort zone.

Working in the arena. 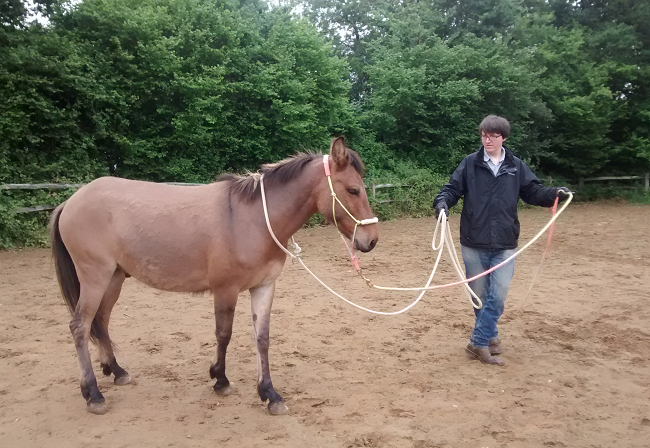 The session lasted for a couple of hours, but during that time Marty only ran out twice and neither of them involved that awful salmon-on-a-line style of thrashing around that he was doing before. In fact, he seemed to remember that he was a mule and kept it all very low energy; most of the time he simply leaned away from the rope or the hand, which although not ideal was a lot better than his previous attempts at evasion. This improved as the session wore on.

This looks like an action shot, but it is in fact just Marty really hoping that he’ll be left alone if he turns his head upside down. 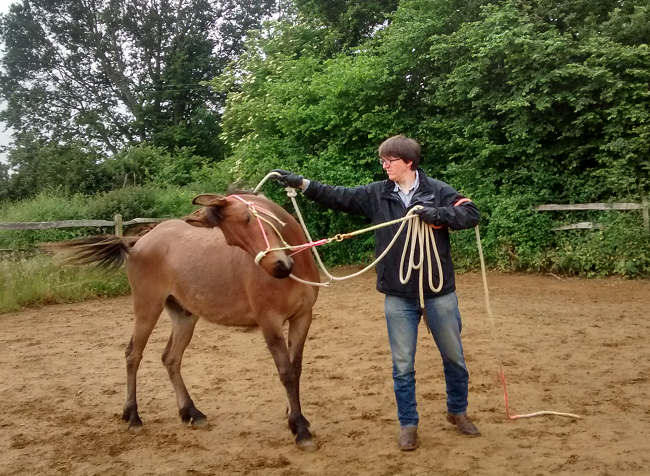 At the end when Ben handed him over I was able to reach up and touch his poll, and I was also able to move the halter around on his head and tug gently on the knot as though I was about to untie it. Feeling much more optimistic, I took Marty back to the field, reached up to undo the halter … and he flung himself backwards at top speed, and then kept running backwards every time I tried to approach him. I was, as you can imagine, severely disappointed. We had literally just spent two hours working on this, and yet in his frustrating mule way he had conceived the idea that things which were applicable in the arena were not necessarily applicable anywhere else.

Ben told me to turn Marty’s backwards into forwards by sending him out on a circle every time he tried to retreat, and once Marty realised that backwards was still not an option he calmed down and I was able to take the halter off no problem at all. I was left feeling pretty down about the whole thing, though. It seemed like working with him had become an entirely futile pursuit. I couldn’t understand why we’d made so much progress in the first few months of our partnership, and why things that we had managed perfectly fine before were now eliciting such ridiculous responses.

Cows had been moved into the field on the other side of the hedge. Mule is on guard. 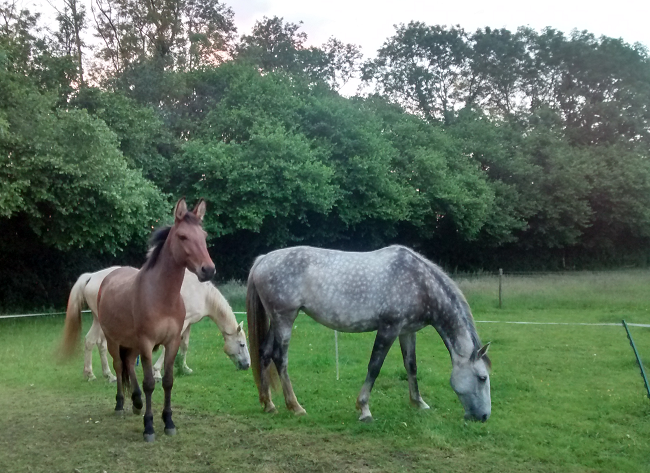 This afternoon I was having a dicussion about feet handling on a Facebook mule group, started by someone who was having difficulty with her previously easy three-year-old, and another member gave this beacon of advice: “About the time she has it all down pat, she will go through a stage of ‘teenage rebellion’ about 4 or 5 in an equine, when they question all your decisions like a human child does at 14. Just keep on keeping on as this stage is normal and will pass too”.

This comment was a veritable light in the darkness for me. It explains so much of what’s happening with Marty. I was aware of the expression that “a mule shouldn’t be born before it’s 6”, and I also knew that the boys tend to mature a lot slower than the girls (hey, not just in the human world it turns out!), but reading this just gave me the buoyancy I needed to hang on and understand that this is a phase and that we will overcome.

Armed with this new resolve, I went up to the stables this evening with a much more optimistic approach. My optimism took a severe wobble when Marty took off as I was putting the halter on and then ran around the field like a particularly annoying chump until I was eventually able to catch him; but I hung grimly on to my little sliver of hope. We worked quietly in the school while Ben rode Iris, and although we later had the same reaction to removing the halter as before, I knew how to handle it this time and it was sorted much quicker. I found it a lot easier to work with him by thinking “this is just teenage rebellion” rather than “my mule has lost his mind and everything is pointless”. Just keep on keeping on is my new motto!

Interrupting our session to go and check out Ben and Iris, who were roping and dragging a wild tree stump. 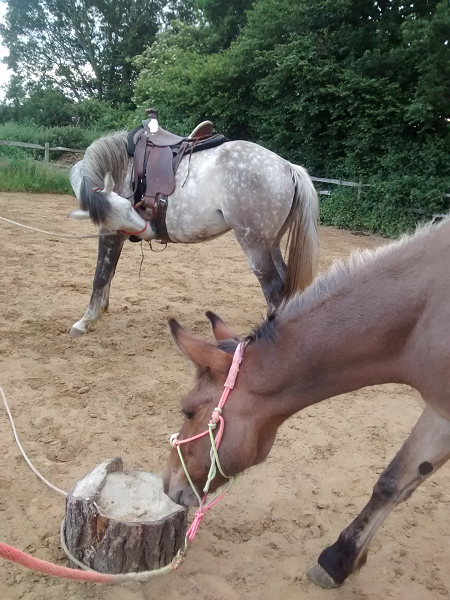 Unfortunately, the Facebook commentor also added an amended version of the old saying, in which she stated that a mule shouldn’t be born before it’s ten years old and that it takes ten years to make a good mule. I think I’m allowed to keel over at this point and lie twitching on the floor for a few minutes … but, on the bright side, if this is true then I’m already half-way there! And in the meantime we can make plenty of memories that I will look back on and laugh at in later years…