We haven’t had a Mule Tale for a while, so I’m really pleased to have this brilliant story on our return. This time, we’re in Germany – our first mule from Deutschland!

As you know, I usually have a set question-and-answer format for the Tales although I do occasionally deviate from this. Dagny’s story about how she found her mule, Moro, is one of these exceptions. I have edited lightly, but this is more or less the way Dagny sent it to me because I adore the way she tells a story! Her excitement is infectious and I admit to shedding a small tear when she finally found Moro again. 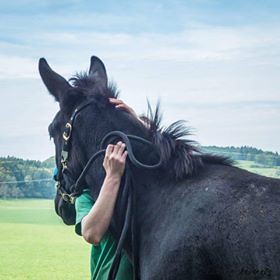 “I cannot really say what attracted me to mules in the first place, but I was sure I wanted one. Which was really crazy or stupid or both – I didn’t have the means for yet another equine. Still, whenever I was bored, I browsed the internet for ads. I even went to look at some and found a beautiful colt I wanted to buy, but the owner decided to sell him to someone else.

Then I lost my job … perfect. Also my rented stable. Being desperate, I fell into my favourite pastime – looking for a mule…

And there he was. I had taken to searching Spanish and French sites, because, you know – that was safe. How on earth was I going to get a mule from there?! But there he was. A black gelding, somehow the long-eared version of my Icelandic horse. He just had that look to him.

For weeks, I would check the ad. Was he still there? It was ok – he’d gone. I don’t have to buy him, I thought. But heck, I don’t WANT anybody else to buy him! Forget it, I told myself, how the hell are you gonna do it?

This was some time in September last year. I was then in a German mule forum. One day, someone asked about where they could buy quality mules and a woman named Iris answered. She lived in Spain, owned three mules, all excellent … so I contacted her.

She said yes, you have to look a bit; but right now, a dealer we know who has really good mules is selling a black colt. Yes!!!!! It was him!!!!

Iris went to have a look. Sent pictures. Oh my God this gets worse and worse. I still didn’t have a job…

In December I decided: ok … this is totally crazy if not worse, but I am 43 now and if I really want a mule it has to be soon. Or I’ll be too old! I flew to Spain in January, on my birthday. Iris and her husband had organised a few mules to look at but I wasn’t really interested. I wanted him.

So we went to the dealer. As we approached, a man was riding a black mule on the driveway. The poor animal was in a really bad condition … and it was him.

With a rider on his back at barely 30 months, a serreta scarring his nose, covered in sweat, trembling, panting … but he still lifted his hoof on demand and let himself be touched. I bought him because he had to be out of there! 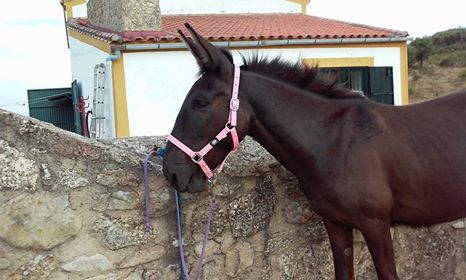 He moved onto Iris’ finca where he recovered very well. In May I found a job, in July I spent two weeks in Spain getting to know him, and in September he finally came to me.

Oh yes it’s not easy with him! He’s courageous, not afraid of most things, like machines etc, but touching him is a different matter. Everything behind the shoulder is a no go. We’re working on it. My plans? He’s talented, he could be anything, but I had this dream of long distance trail rides … and hopefully I’ll do it. One day. 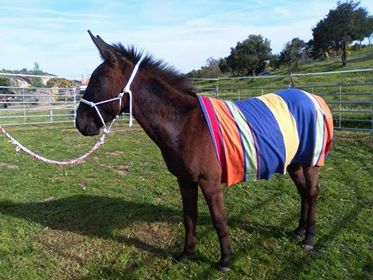 I’m unbelievably happy I did it, even though it will be a lot of work. But he’s worth it. His mother is a Lusitano so I guess he’s a Mulitano. His name is Moro.” 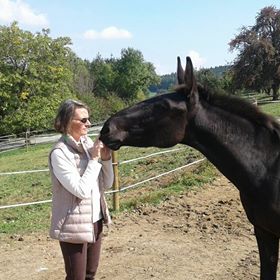 Did you enjoy this story? There are more Mule Tales here!