I don’t have a Mule Tale ready for you this week, but as it was Marty’s second Gotcha Day on the 13th and I failed to write our usual Sunday night article due to an attack of the glooms … I thought I would do a Marty Mule Tale. It gives me an excuse to dig out some older photos. 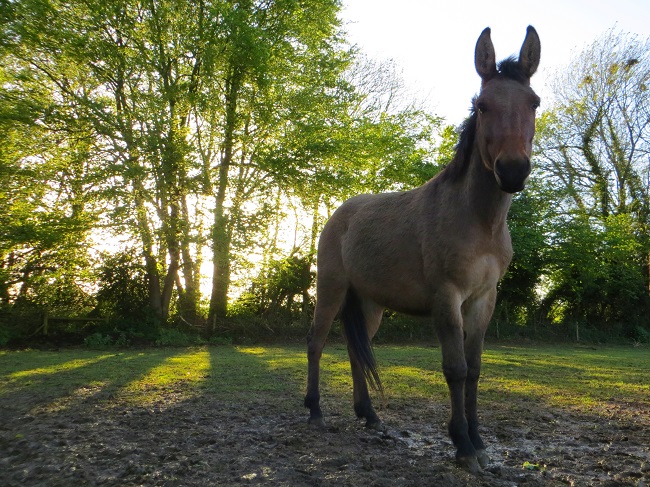 Watchful and wary in the evening sunlight.

Marty is a 6-year-old john mule, standing at approximately 14hh (I really need to get round to measuring him). He is a brown dun and has some very fetching stripes on his legs, as well as a dorsal stripe and crossbar. In winter, he gets a ventral stripe too.

That’s his literal description, anyway. To describe his personality you only need to look up “mercurial” in the dictionary – it is, I feel, a very muleish term as it is, but Marty makes it his own. Ben once described mules as “like autistic horses” and I can definitely see the resemblance in Marty.

He is a friendly guy with a lot of curiosity, but has a firm sense of stranger danger and does not enjoy being touched by people who haven’t been thoroughly approved. He loves butt scratches, but only from people he trusts. Offering his butt to you is his highest form of flattery. Due to the Great Banana Incident of 2014, he will not take food from my hand unless it is one of the KM Elite coconut horse treats which he has had since he first came to me (accept no substitutes!). He does not approve of familiar things in unexpected places (haynet on the fence is fine; haynet slung over my back or left on the ground is not). He is terrified of dogs unless it’s the yard owner’s Labrador, and then he’s only mildly bemused. He is an adventurer at heart and loves to explore, particularly if that involves climbing things and being able to pretend he’s a donkey stallion by posing on a hillock. Ben’s grey mare, Iris, is the love of his life and he enjoys a frenemy-style relationship with our pony, Cash. 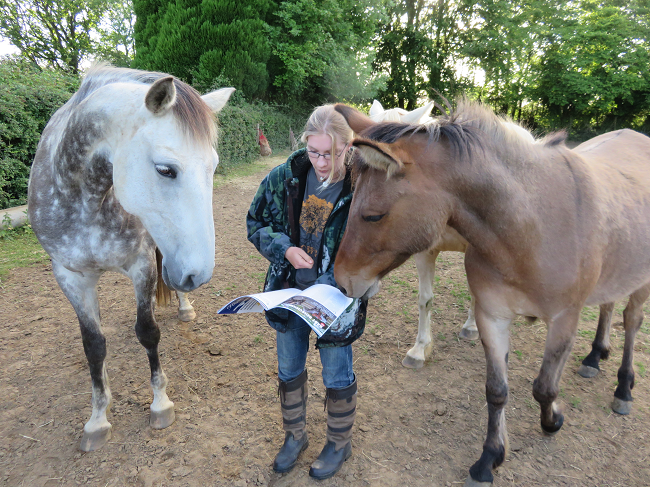 Chekcing out his pin-up girl, Iris, in Horsemanship magazine.

Late one evening, while Ben and I were browsing the internet on our separate machines (you know, doing what healthy couples do), Ben looked up and asked me if I wanted a mule. The Marty origin story is pretty much as straight-forward as that. Tom Widdicombe, who had owned Marty for almost his entire life, was looking to downsize his herd and wanted someone who would be able to dedicate more time to the little brown mule.

We didn’t actually meet him until two weeks later, which is also when we brought him home. You can be sure we crammed as hard as we could on mule knowledge during that fortnight! As he was nearly 200 miles away in Devon, Ben and I spent the weekend with Tom and Sarah and put in as much work as we needed to teach Marty how to load and to persuade him that he could work with us, after all. The latter is still an ongoing project! 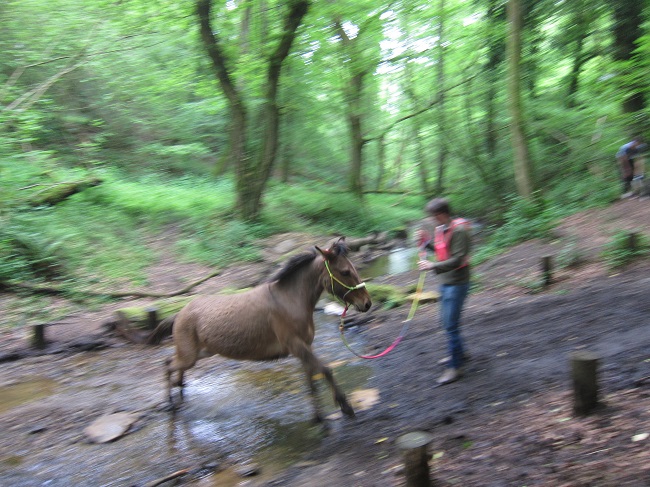 Truth be told, not a great deal at the moment. Part of my recent gloom was due to the fact that, on our first Gotcha Day, we celebrated with a long hike together. It was a really lovely day and I felt very optimistic about the future. Since then, things have steadily unraveled for us. Last year we could walk for miles and he was happily wearing a saddle; this year we can do neither of those things. The idea of actually riding him one day has become an increasingly distant dream and I would be lying if I said my enthusiasm wasn’t at an all time low.

However, the story isn’t over yet. In June he is going back to Devon for training with Anna Bonnage, and I am confident that this will give us a clear direction of where to go from there – even if that’s just to confirm that he needs someone more mule savvy than I.

If I were to allow myself an indulgent daydream, then in a world where Marty and I become perfect partners I would very much like to pursue horseback (sorry – muleback!) archery as a hobby, and possibly turn our hoof to endurance as well. But most of all I just want to be able to enjoy this area’s fantastic scenery from the safety of my buddy’s back. 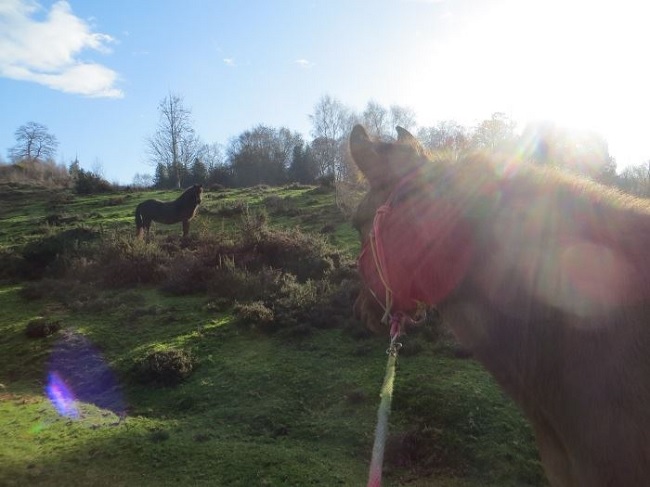 Meeting one of the feral Exmoor ponies in the Punchbowl.

One evening, in order to give the herd as much protection as I could from the pouring rain, I fed them near the top of the field then went and put out their hay in the shelter of the trees while they were eating. As I finished I turned round and saw that Marty had already finished and had his face stuffed in Cash’s bowl (Cash had his ears pinned but wasn’t actually doing anything about it). I yelled OI! MULE! at him and started down, but he ignored me. I started to run and he still completely blanked me, so in a fit of annoyance I sent out a huge burst of energy and chased him off. Normally I would have left it at that, but this time I clapped my hands and went after him, sending him right away – making clear, I guess, that he Was Not Allowed. He poked his little nose in the air and trotted off at high speed towards the hay.

The next day, I was poo-picking nearby while the herd ate. Marty finished his dinner and immediately walked straight to a pile of hay, making no attempt to steal anyone’s dinner, and just stood there serenely chomping with his eyes and ears fixed firmly on me.

The following day I was doing the same, and although Marty initially went to a hay pile he then abandoned it and made a beeline towards Cash. He ignored my yell, so I sent energy at him again and clapped my hands – and he instantly spun 180 (it was a blink and you’ll miss it move) and practically levitated back to his hay pile. I’d never seen him move so fast, it was pretty impressive. Once back at his hay, he immediately regained the same serene attitude of the previous day and watched me with sparkly eyes and happy ears as if to say: “Who? Me? I’ve been here all along”.

Another story would involve one of the many times he has deliberately gone out of his way to avoid harming me. I was leading him back from the arena one day when, just as we drew level with the hay shed, someone inside threw out an armful of hay. Marty had been walking at my left shoulder, between me and the shed, but in another feat of levitation he suddenly reappeared on my right. He could have easily leapt sideways and knocked me down – it would have been his quickest escape – but even in his fright, he remained aware of where I stood in relation to him and lithely teleported around me. 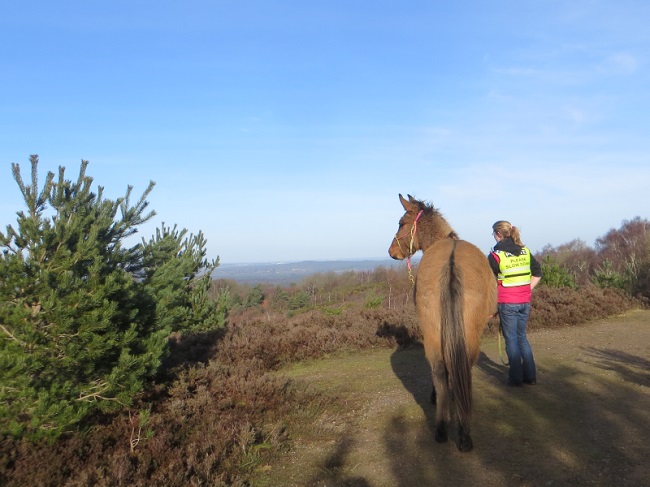 Here I might grit my teeth in a rictus smile and say that when people warn first-time mule owners against buying young mules/young john mules/young unbacked john mules, they ain’t kidding. But that’s a bit of a downer, isn’t it, and not very helpful.

I think the most important thing I’ve learnt is horsemanship. Marty has taught me more in the past two years than I’ve learnt in twenty-two years previously. When Ben and I rode with Harry Whitney in November, he said – only half-jokingly – that he thought every horse owner ought to work ten donkeys and then ten mules before they’re ever allowed near a horse. I absolutely agree. A mule must be treated the way a horse should be treated.

My advice would be that mules are a serious commitment, but they provide serious rewards. There really is nothing like having a mule for a friend. Also, prepare to have everything you think you know challenged – repeatedly!