Brie is one of the people who has been there from the beginning with Marty, and has offered me plenty of good and thoughtful advice over the past couple of years. Although she no longer owns a mule, I felt that a retrospective Mule Tale was something that definitely needed to be shared. There’s too much good advice for me to monopolise here!

Jo is another US mule, and I have now made a specific page (see my menu bar, above) to list the Mule Tales according to where in the world they’re from.

All images are copyright © Brie Hoblin. 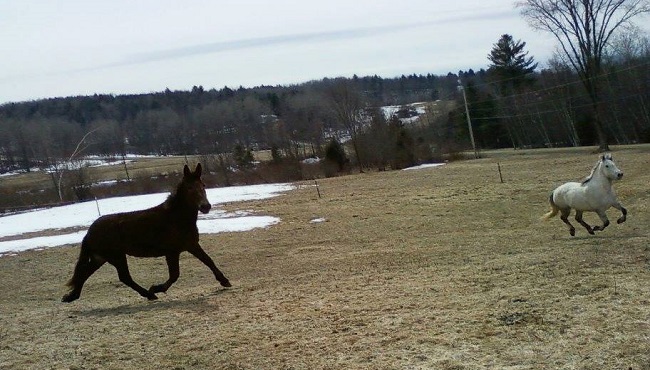 1. Please tell us a little about Jo.

Jo is a very rare half Curly horse mule of light draft size. She’s 16hh & roughly 1100lbs. I don’t know mule colors well at all but she is basically bay. She’s 16 this year, and she worked as part of a 2 mule Amish team before I got her. 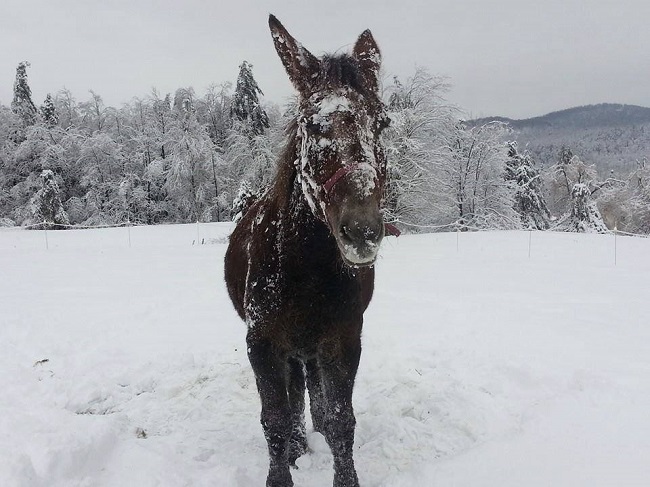 2. How did you meet her? What prompted you to get involved with mules?

I own a Curly horse already, and Jo was being talked about in the Curly horse community around the world. Everyone was all aflutter about the “big Curly mule going to slaughter.” Jo was going through the New Holland auction house out in Pennsylvania, and Another Chance 4 Horses had advertised her on their website. The deadline for her to ship was 4pm on a Friday. I convinced my mother to call and pay for her around 6pm. I said she’d make a great “husband’s horse” and be very low on vet bills & feed bills being a mule. I was intrigued by the idea of mules but hadn’t really spent any time around them in person. I knew they were ‘smarter than horses’ and that ‘you have to treat a mule the way you should treat a horse.’ I was fairly sure I could own her for a few months, do a little training, and resell her at a higher price, but also I just wanted to save her. 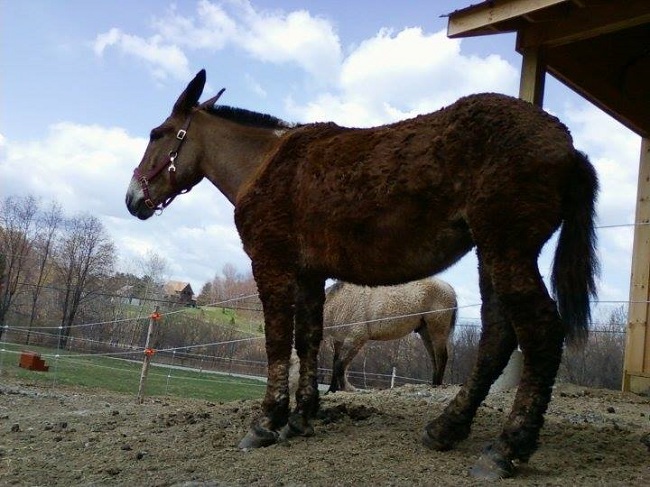 3. Were there any major difficulties you had to overcome?

My mother, God bless her, drove all the way to Pennsylvania with our horse trailer to fetch Jo. She said New Holland haunts her dreams to this day, and that she looked at Jo and said “honey you better get on this trailer” and Jo walked right on.

But as soon as we got her home it all changed. Jo would run to the end of her paddock if we stood in front of her (run in) stall. If we got close to her she offered to kick. She was fairly explosive. She had a sweeney shoulder. The horses were freaked out at first. It wasn’t easy.

I was completely fascinated by her though. She was so incredibly PRESENT & AWARE in this way that no horse I had met had ever been. She noticed everything. We actually connected fairly well in the first month that I had her, but then our vet came by to see one of the horses and warned me “mules kill people.” He went on to say “horses kill people by accident, mules do it on purpose.” That made me much more hesitant on being around Jo & while he meant well, it actually damaged our relationship quite a bit. (Personally I will take the critter that kills on purpose as long as I have a good idea of what will piss it off. But many people are intimidated by their intelligence and I think sometimes there is good reason to be.)

Our progress was slower after that at any rate, because I was busy being wary instead of being in the moment with Jo. Certainly mules are observant enough to know the difference. She was hard to catch initially, but once I started doing clicker training with her and she got a treat every time she had her halter put on or taken off, she became very easy to catch

I owned Jo for 4 years total and our biggest obstacle during that time was working with her hooves. Most likely she had been put in stocks and had her hooves tied up to be trimmed in her previous life and she was not trusting me to pick up her hooves and hold them any time soon. I spent years massaging her legs and picking up and releasing her hooves using ropes, and then my hands. We made very little progress to be honest, until the fourth year that I owned her. My boyfriend at the time was fascinated by Jo as well, and within 2 weeks of meeting him Jo started calling to him when he arrived, something she had never done in years of ownership with me.

One day my boyfriend was helping me to get a particularly nasty ball of ice out of my horse’s hoof while Jo watched from a hundred feet away or so. Then he walked over to her and easy as could be, he was able to pick the ice out of her feet too. I could see her still panicking, but then working hard to control the panic. Perhaps because my boyfriend was more of a beginner and less wary of her, she trusted him more easily. Or perhaps she likes men better. For whatever reason, that was her light bulb moment. A week or so later, my farrier (also a man) was able to finally come trim all 4 of Jo’s hooves. For almost 4 years she had simply worn them down naturally while we kept a close eye on them.

Jo was also easily offended by many things. I know once I opened an electric fence gate a bit too quickly and she got fairly upset and flew backwards. Trying to teach her how to lunge was also highly offensive. What was the point of circles?? 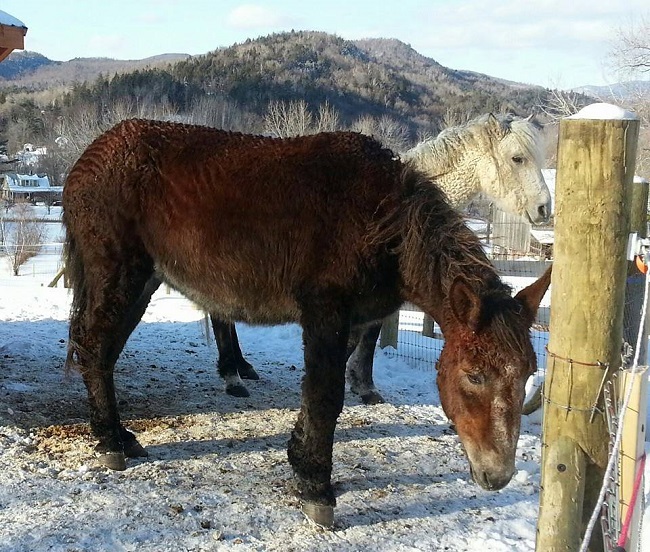 4. What were the highlights of mule ownership for you?

I adored Jo the entire time I owned her (and still do though I see her far less often now). Watching her overcoming her trauma, and seeing her go from a mule who was skeptical of THE WORLD to one that was slowly able to lend us some trust in tougher moments was undeniably beautiful.

Many many many times people watched me work with her in a gentle patient way and told me flat out to be bossier or more authoritarian. Sometimes I was told I would make progress far faster if only I would push her more. I often invited these people to see what they could do with her themselves and inevitably she did far worse with them in short order. It gave me a lot more confidence in my own abilities to read a mule or horse’s energy, and my timing became much, much better from working with her. I never ever rode Jo, but the progress I did make with her on the ground and in terms of what she trusted me to do gave me so much confidence. And, if you know how to negotiate / convince an overly skeptical highly intelligent mule to do something, then crazy difficult coworkers seem like a breeze afterwards. It may sound odd, but I would say Jo helped me in my software career as I have certainly encountered some difficult personalities.

Jo is a mule who has a high high whinny, an almost eerie sounding wail that ends in a haw-haw-haw at the end. It always got me laughing when I heard it, and I still smile thinking about that sound.

Right before Jo found her next home I sent her to a draft horse trainer who was quite smart and had her number. She immediately tried to run away with him but he steered her towards a giant wood pile so she had to come to a halt. After that she was good as gold and I came down and drove her a few times while she was there. Jo loved returning to her old career, and that intense presence on the end of 2 reins listening so intently for my slightest cue was amazing. I’ll never forget that feeling. 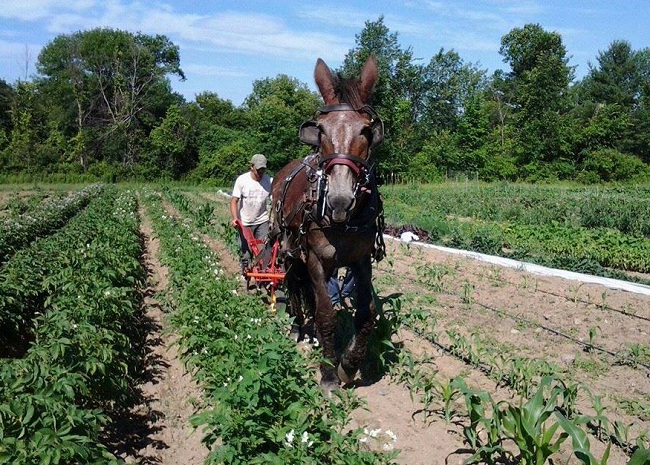 5. What’s the most important thing you learnt as a mule owner, and what piece of advice would you give to someone new to mules?

If you are new to mules, ride someone else’s well-trained mules first. Think about why you want a mule. If it is because you want to brag about your horsemanship skills being good enough for mules, do not buy one. If you are fascinated by them and think they are ‘neat’ do not buy one. If you spend time with mules, have decades of experience training horses, and can afford to get a well-trained mule that has been treated well, then it’s a good idea to get a mule.

Traumatized mules, and unhandled mules are a double-whammy in my opinion, and in some ways I did not have the tools I needed to deal with a traumatized mule like Jo. We did ok because I was so good about watching her and backing off when needed. But certainly she was NOT a good ‘husband horse’ nor was I able to ‘train her for a few months and sell her.’ If you buy a mule, know that it can be difficult to rehome them because fewer people are capable of handling them. If you breed a mule, be prepared to handle him or her every single day. I hear that good mules are great and bad mules are terrible. Certainly things with mules can be more intense and require greater precision from their handlers!

Mules can be a terrific adventure, but be prepared to invest a very large portion of your energy into them. Having a part-time job is probably a good thing. Also, research mule specific tack, and mule specific care. Worming them is much more complex and can lead to colic, they have different kinds of worms that they are vulnerable to, require different saddles, and are often silent colickers–too stoic for their own good. Find a reputable mule vet before you buy a mule.

And when you buy a mule, be prepared to love them with all your heart. Know that you will never be the same.

To follow on from Brie’s advice: in the UK, it is quite difficult to familiarise yourself with mules ‘in the flesh’ before getting one, as there are so few around. It can be equally difficult finding professionals who are mule savvy. I will be making a post about this later, but if you are UK based and are looking to become a mule owner, then I would whole-heartedly recommend The British Mule Society as your first point of contact. Facebook users may also find the Mule Owners UK group useful, too.

Would like your mule to be featured here? Then please contact me either via this blog, message me on my Mulography Facebook page, or email me at: herecirm (at) gmail.com. I would particularly like to hear from UK mule owners (purely because Mulography is about owning a mule in the UK), but am happy to take worldwide submissions!