We haven’t had a Mule Tale for a while – I’ve missed these! As always, if you’d like to share the story of your own mule(s), please get in touch. I’m particularly interested in increasing my Import Stories section, and Muleteer Tales for trainers/people who’ve spent a lot of time with a lot of mules.

This story is about my friend Carla’s mule, Valour. They both live in Canada. I don’t know why I haven’t asked her for a Tale before as she and Valour are such a brilliant team, and a real testament to the value of working with your mule from a young age. I very much enjoy hearing about their endeavours. 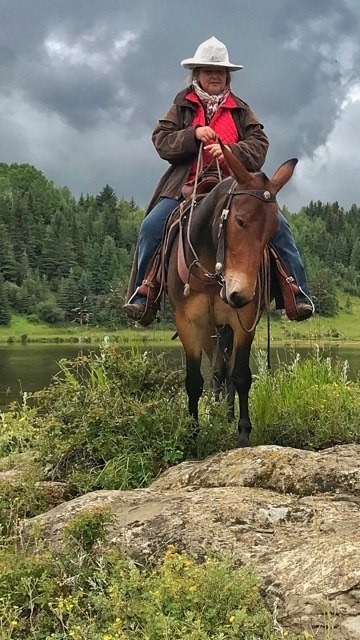 This is Valour, my young John mule. He is learning to be a farm and ranch mule. His duties will eventually be: moving cows and sorting cows in a outdoor setting, which he already does in small time frames. Next will be harness and longer stretches in the saddle. Next year he can start intro level working equitation. We will see if that fits in our schedule. 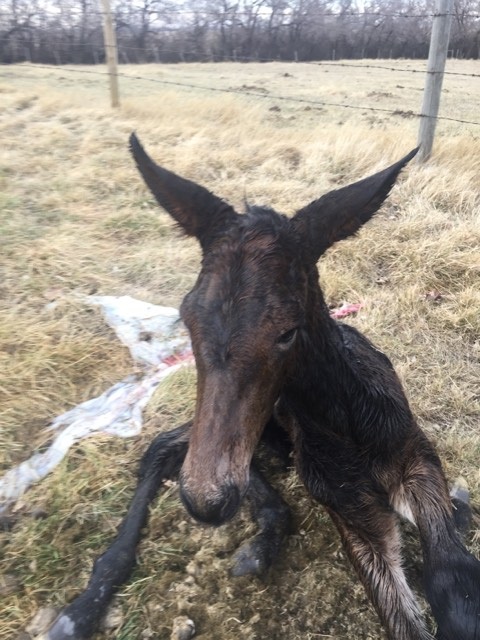 The day we met – March 11, 2016. I had to administer borrowed colostrum so he would be healthy. Without going into a lot of detail here, his mother tested positive for antibodies against donkey DNA so her colostrum wasn’t going to be okay for a mule. He was muzzled for 33 hours to be safe and his momma took it from there. Our bond has never left.

[Mulographer’s Note: the condition Carla was guarding against is called neonatal isoerythrolysis. Scroll to the end of the Mule Tale for more information about this] 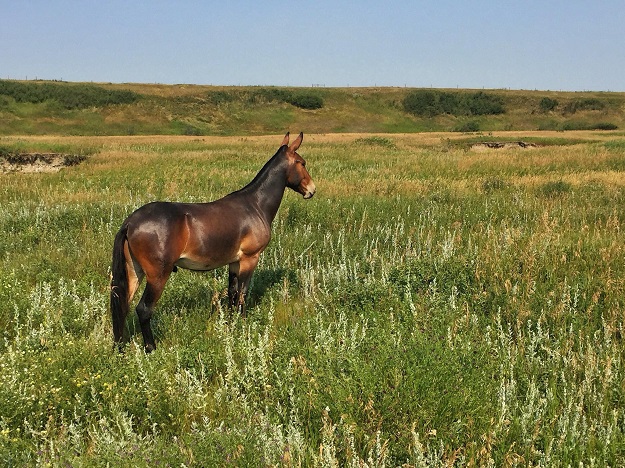 Exposure has been the name of the game for us, since day one. Whether it’s a nap together in the yard, his inspection of our kitchen renovations ( still in progress), or a romp on the creekland checking cattle – exposure is what I am up to. Someday I will be too old to ride, and maybe a younger person will need a mule that can do anything. He boasts Eternal Sun, Que Ton Eagle, and Yellow Mount in his pedigree so he takes new things in stride. I have always been there and if he is away from other horses, he is content if I am there. He will bray for me if I leave.

[Mulographer’s Note: the operation to remove Valour’s sarcoid, which had grown very close to his eye, was an interesting one for me as it is not a procedure I’m familiar with. The sarcoid is removed and a chemotherapy bead inserted beneath the skin; this bead will eventually dissolve. No special aftercare is needed, though Carla was told to only handle the area while wearing gloves for the next few weeks] 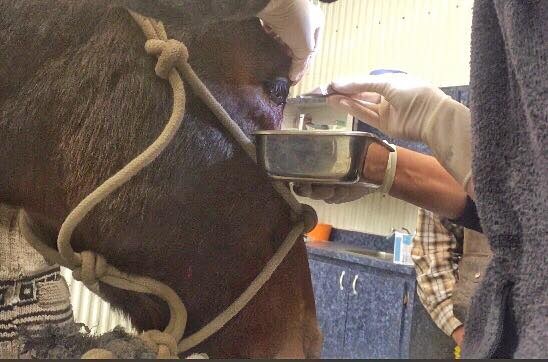 He developed a sarcoid during the summer. Yesterday during his sarcoid surgery, I momentarily left his sight and even under sedation he called for me softly to come back.

He thinks human feet are bizarre and tries to mouth mine if I’m out on the porch in bare feet and he is in the yard. He grazes our yard often. 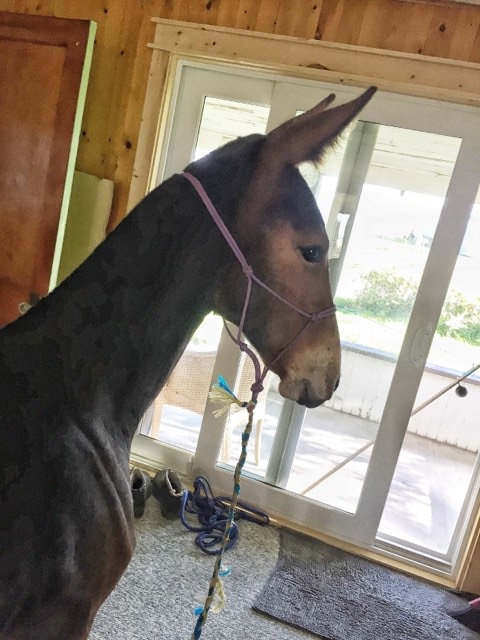 Valour has taught me that imprinting is truly the way to go. Ongoing time spent everywhere produces a fearless equine.

What is neonatal isoerythrolysis (N.I.)?

N.I. is a condition where the mare creates antibodies against the foal’s red blood cells. These are passed to the foal through colostrum, which is why it is vital to prevent the foal from suckling from its dam for the first 24 to 36 hours. It is commonly seen in mule breeding and can happen when the sire and dam have different blood types, and the foal has its father’s blood type. However, this still does not necessarily mean that N.I. will develop and so the best course of action, if both blood types are found to be different, is to test the mare two to four weeks before she’s due to foal to see if she’s producing antibodies. She can not be tested sooner than that.

A while ago Carla wrote up her experience of N.I. for me to post on the Horsemanship Magazine page, as we ran an article about it in issue 113. I’ve reproduced her words here:

“I heard about a friend in the states, who raised performance mules, and her experience with N.I. She advised me and others with bred mares to test about 3 weeks before foaling.

My mare had only had one previous mule foal. She tested positive for antibodies against donkey DNA, so I ordered a milking kit and started my search for horse colostrum. Getting the colostrum was the most difficult part!

We had planned for the foal to be born during calving so that the check on the cows would coincide with checking the mare. Now, it was even more important to check. We had to make sure that non of his mothers colostrum passed his lips. No cameras at our place, all manual. Just before sunset my husband came to get me. There Valour was, still wet with his fairy shoes still on.

No way could I get colostrum from a vet or agricultural store, like you can for a calf. Luckily, the owner of the jack had some that she had milked out of a mare whose foal had been stillborn. Thank goodness for her foresight. I traded my mares colostrum to restore her bank, as it can be used on any horse foal and be fine.

Our vets’ recommendation was to feed the foal and milk the mare for 36 hours. At 33 hours I didn’t put his muzzle back on right away. While replacing the caps on the full bottles after milking his mom, and having fed him a bottle of milk replacer, I could hear slurping going on behind me. Oh well, a few hours early, but he should be okay. That was it.

I so enjoyed that 33 hours. I would do it again in a heartbeat. Even though he stayed with his mom in the stall, I spent lots of time in there too. Valour would come over to me and attempt to interact with me. The mare was fantastic about it all. As a result of all that early time and time we continued to spend together, we have an amazing bond. I can call him from over a mile away and he will come. Training was so easy, since he treated me like family.”