Earlier this year, I stumbled across a Facebook page called A Strange Request. Cathleen and her partner Vlad were just about to set off on a horseback adventure from their home in Cornwall to Malin Head, the most northerly point in Ireland. That’s a journey of over a thousand miles. It wasn’t the first long ride they’d done, either – eight months previously, Cathleen had ridden unsupported from Scotland to Cornwall! I had some serious hero-worship.

As I have some half-formed daydreams of doing something similar myself one day, I followed their journey with great interest and I was thrilled when they posted about buying a mule they’d met in Ireland! Here is Mícheál’s story. 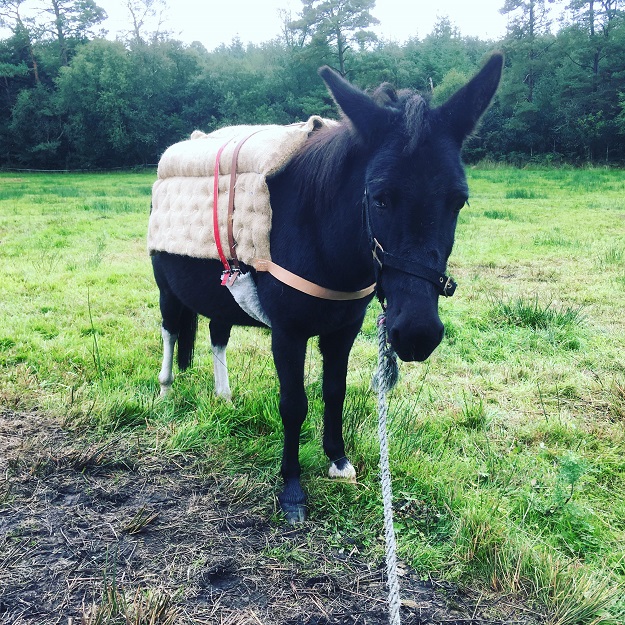 Mícheál (Meehawl) is a little one-eyed Irish jennet (hinny). He’s five-years-old and stands at about 11hh.

I’d always fancied testing myself against a mule. I’d heard a lot about them and how intelligent they are, and having spent many years working with horses, thought it would be an interesting challenge to one day have a mule.

Whilst on a 1,000 mile long horseback adventure around Ireland with two of my horses, Oisín and Dakota, my wolf hybrid, Spirit, and travel companion, Vlad, we passed a field just outside Limerick where I saw some very nice looking mottled grey mules. Rather taken by them, and thinking that perhaps we could do with another animal to help carry the packs, we enquired about them. The man who had let us camp in his field that night said the mules belonged to his father who did a bit of horse dealing.

The next morning (24th of August, 2018) we went up to the farm to see the father, who said he had just the mule for us. There in a dark stable, knee deep in muck and hiding behind an enormous donkey, was a little black mule with only one eye. The man assured us he was castrated, but had no passport and wasn’t all that well handled. I didn’t think it sounded like a good idea at all! What good would a wild, one-eyed, tiny little creature like that be to us?

I asked if we could put a rope on him and see whether he led. The man herded both the donkey and Mícheál out of the stable, cornered them in a tight spot and lunged at the mule, tying a bit of scraggy rope to the halter. The poor creature was terrified and stood shaking in the yard. The man handed me the rope and when Mícheál had calmed down a little bit I gently asked him to move away from pressure. It was clear he’d not really been led at all, but he was intelligent and a quick learner. I still wasn’t convinced it was a good idea, especially not in the middle of a long distance ride in a foreign country when the horse I’d been riding had only just become half-sensible; but, after hearing that the man intended to take him to a sale the following week if I didn’t buy him, my heart took over from my head, €50 left my wallet and I found myself leading a braying mule down the road to the field where the horses were waiting. I managed to say no to taking the donkey as well for another €50, but only just!

That day Mícheál had a crash course in being led along busy roads for 25km, having to deal with traffic passing his blind eye, manoeuvre scary road markings and terrifying manhole covers, all of which he took in his jaunty little stride with a calm, considered sensibility that impressed me and endeared him to me no end!

We spent 2 weeks resting the horses and working on getting Mícheál semi-civilised, building his trust in us and teaching him to lead and carry a pack before we set off again to finish our journey to the northernmost point in Ireland. 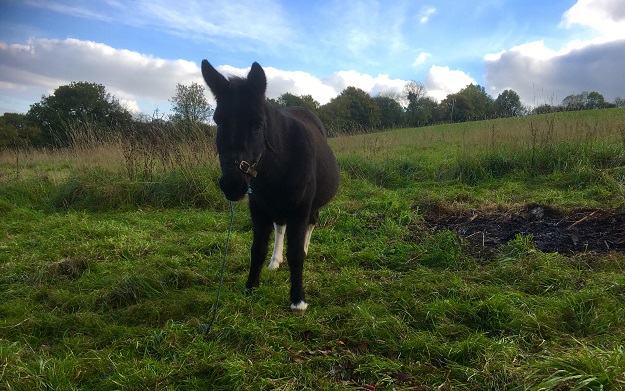 Mícheál carried some light packs for us on the journey and the plan is that he will join us on our future expeditions as a pack mule, but for now he’s having a well deserved winter off!

Wilful, and with a mind of his own, Mícheál liked to test me nearly every day of the journey. It wasn’t easy. Vlad decided quite early on to have nothing to do with Mícheál (probably after we spent 3 hours trying to catch him one morning!), and the feeling appeared to be mutual as Mícheál refused to be led by Vlad and would simply plant and not budge if Vlad tried to lead him – which meant I walked nearly all the way from Limerick to Malin Head, County Donegal.

Most days would see us catch the horses, take them out of the field, get them ready for the day’s ride and then I’d spend a minimum of 15 minutes (sometimes more!) trying to persuade Mícheál to be caught. It wasn’t that he wanted to get away from me, because even in a big field he would mostly just trot a small circle around me, eyeing me up defiantly with his one good eye, but always just out of reach. When he’d had enough of that he’d either give in and let himself be caught in the field, or squeeze under the electric fence (even if it was on!) and go to stand quietly with the horses waiting for me to catch him, groom him and put his packs on. If his packs slipped or he got tangled in a rope, he was quite good at standing quietly for me sort it out for him, but if Vlad tried to get near he’d get quite handy with his back legs.

Because of his morning antics, he very nearly got left behind on several occasions, but luckily he always came round just as I was giving up on him.

By the end of the journey he’d stopped doing this every day and was fine to catch (although a bribe of ginger biscuits seemed to help!). I saw this as a great compliment and took it that he had decided I was actually ok. High praise indeed from such a strong-willed little creature.

I actually really appreciate how cheeky and independent he is and he really added another dimension to the journey, not to mention the constant entertainment with his hilarious mule noises (and, being a sociable Irish chap, he liked to stop and chat with every horse, donkey and sometimes even cow that we passed!) and his love of strange flavoured crisps! Needless to say he came back home to England with us at the end of the journey and will be a well loved addition to my family of four-foots for the rest of his days. 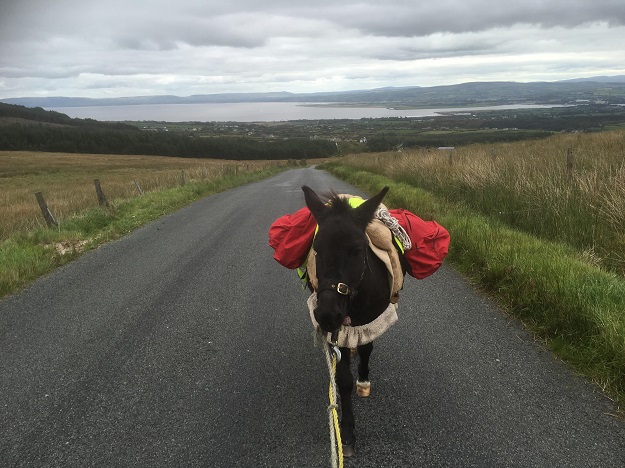 The most important thing I’ve learnt in my short time as a mule owner is that you can’t force a mule. They cannot be bullied or coerced into anything, they need to be outsmarted or reasoned with and they’re not very forgiving when you make a mistake! But get it right and they’re the most loyal, willing creatures, who will give back a hundred fold what you put in!

If you would like your mule to be featured here, or if you have a mule story that you would like to tell, then please contact me either via this blog, message me on my Mulography Facebook page, or email me at: herecirm (at) gmail.com. I would love to hear from mule owners anywhere around the globe! To read more Mule Tales, don’t forget to check out the archive here.