After the second day at Mule School, I had a bad dream. In it, Marty needed his feet trimming but our EP, Emma, was unavailable; so I – for some reason – decided to do it myself. I was holding up his back foot, rasping away, and thinking what a good boy he was being. I made a mistake and took off a chunk of his heel, but after a brief panic I figured I could just compensate by leaving his toe longer (??? Don’t ever hire Dream Me to trim your equines’ hooves). Feeling satisfied with my job, I put his foot down and was horrified to see him limp away. He was badly lame, and even worse, I suddenly realised that he was leaving little bloody hoofprints on the ground.

I told Anna about it the next morning (just because it was a weird dream and it sometimes doesn’t occur to me that people might not want to hear about my weird dreams), but she looked thoughtful for a moment before asking: “How did it make you feel?”

I was surprised by the question, but answered honestly: horrible! I’d felt so sad when I realised I’d made things bad for Marty, particularly as he’d been so good about letting me do it. Anna said that the only person who could interpret my dreams was me, but she thought it probably had to do with my feelings about Marty’s training. She was right, of course. Anna is a lady of many talents! 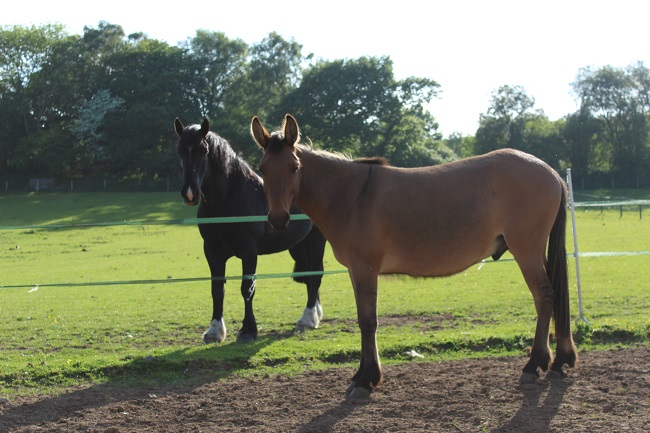 Marty with his buddy, Apollo. They used to live on the same yard together and seem to remember each other! Apollo is a good friend and doesn’t tease Marty about his belly.

The thing about acknowledging your mistakes is that you have to remember not to dwell on them. I struggle with that, as I’m sure most people do. But we don’t deliberately mess up. People aren’t perfect. We do what we think is best at the time. I know I’ve shared this Maya Angelou quote before, but it really is perfect: “I did then what I knew how to do. Now that I know better, I do better.”

The rest of the week’s work involved both Anna and myself, which is why there aren’t so many photos from those sessions. When I was in America, we did something with my borrowed horse that Harry called a “petting party” – getting the horse used to seeing things out of either eye by having two or more people move in and out on either side. 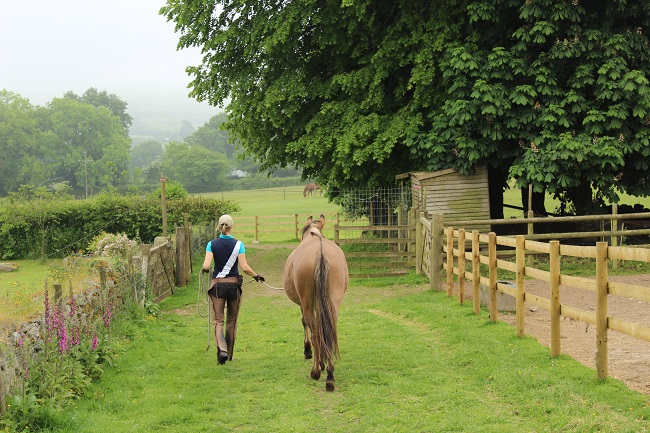 Anna and Marty on their way down to the arena.

With Marty, we started with me carrying a flag and using it to ask him to step his quarters over. The aim of this was to teach him to move his feet laterally and to come forwards, so that the rope never lost its slack. The flag wasn’t there to drive him. Anna emphasised the use of rhythmic movements, whether that’s in the steady up and down of the flag or a reassuring stroke of the animal’s neck. We later progressed to both Anna and myself using a flag on either side, alternatively to begin with, and then approaching together to rub on him.

During this, Marty was haltered and put on a 22ft line (we initially started out with a much longer rope, thanks to Anna’s fireman landlord, but Marty figured the concept out very quickly and in the end we didn’t need such a length. This was good, because it was a lot of rope to carry! The idea was that if he wanted to back the length of the arena, he could). The rope was then looped around a stout post at the end of the arena, in such a way so that Anna – on the other side of the fence – would be able to let it slip through if Marty set to thrashing. Of course, the aim wasn’t to make him throw himself around, but if he did then Anna needed to be able to let the rope out so that Marty didn’t hurt himself. 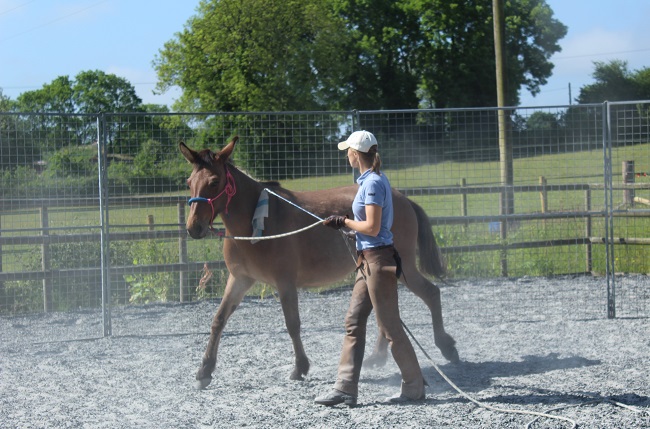 Preparation in the round pen before working him off the post.

I’ve seen a similar method recommended many times on the mule forums I frequent, although I had never seen it done Anna’s way; instead, the mules were hard-tied and left to figure it out on their own. This had always bothered me as I couldn’t see what the mule would learn from it, but it was such a common suggestion that I began to wonder if I had got it completely wrong. I queried Anna about this and she explained that a mule like Marty would almost certainly break his neck if treated that way. With Anna’s method, she is making the wrong thing difficult, but not impossible. Taking away the mule’s choice is not really training at all.

I also asked why we were introducing him to stimuli while haltered, rather than at liberty in the round pen. Anna explained that both methods were fine; she had no problem with introducing things at liberty, but in Marty’s case, his anxieties centered specifically on the halter. We could spend a long time touching him with flags and swimming floats while he was loose, and then find ourselves having to start over again from the beginning once his halter was involved. Therefore, his halter needed to be on during these sessions. The reason he was “tied” was to help him learn to respond to that feel on the rope – for him to come forwards when he feels tension, not backwards. This would help him to be safe to lead and to tie up.

As I said, Marty figured the answer out very quickly. I should also add that when he did run out backwards – which he only did a couple of times – I was to stop moving the flag. There would be no benefit in creating energy while he was carrying so much concern. To reiterate, the flag was not there to scare him. 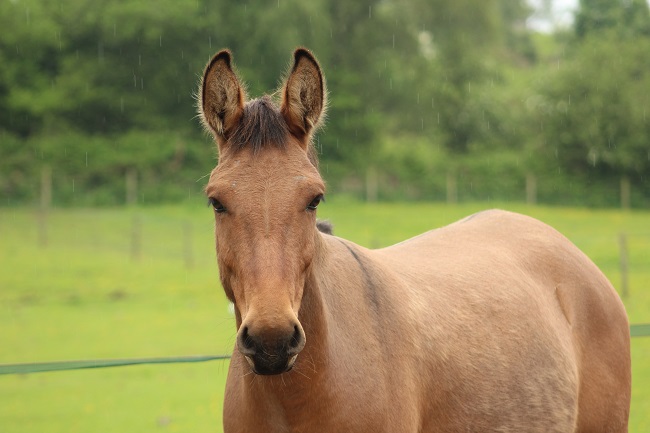 Anna was impressed with how quickly he picked things up, and after a couple of sessions suggested that we try him on a different post in a different area to make sure that he hadn’t just associated that one place with what he’d learned. Mules have a tendency to do this, as I’ve discovered for myself in the past.

In this other area, we also introduced some new things: instead of using flags to touch and move him, Anna had me start a good distance behind Marty and walk back and forth with various noisy objects. I threw a hula hoop up and down, jingled some tin cans, and even sounded a siren! Interestingly, the siren didn’t bother him at all except for one of the sounds which was quite high-pitched and whiny. I didn’t blame him, that one set my brain buzzing too. He found noise much easier to deal with than visual stuff; me raising the hula hoop into the air was quite a worrying thing for him.

Once we’d done walking back and forth, and being able to come closer and even approach him, Anna had me go back to my starting point and do the same thing again – except this time, I had to skip. Then I had to hop. Then I had to leap up and down like I was playing leapfrog. I am not a very coordinated person and it took me some time to figure out how to skip and throw my hula hoop.

Anna claimed this was all to help Marty, but I think she maybe just wanted some morning entertainment… 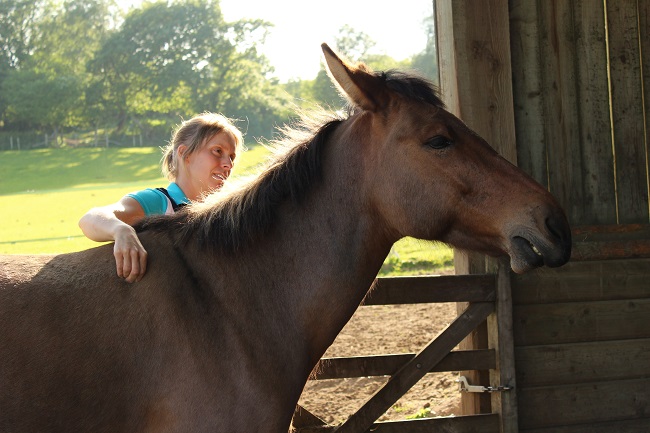 I showed Anna where Marty’s best scratchy spots were. He was very pleased.