Ben and I went down to visit Marty last weekend, as Anna wanted Ben’s help to work on haltering. When I was last there, she had me in the round pen with her and Marty, working on being able to come in and halter him normally. I wasn’t very effective. I realised that I was just too nervous – I really hate it when Marty spins and/or starts thrashing around, so I was creeping in when what I needed to do was go in business-like. We didn’t want to make Marty feel like he has to leave, but at the same time it’s useful to work on it when it happens. Marty needs to stretch his comfort zone in order to start making changes.

Ben, of course, is Marty’s arch-nemesis so we knew we’d be able to get some useful work done if it was Ben doing the haltering! 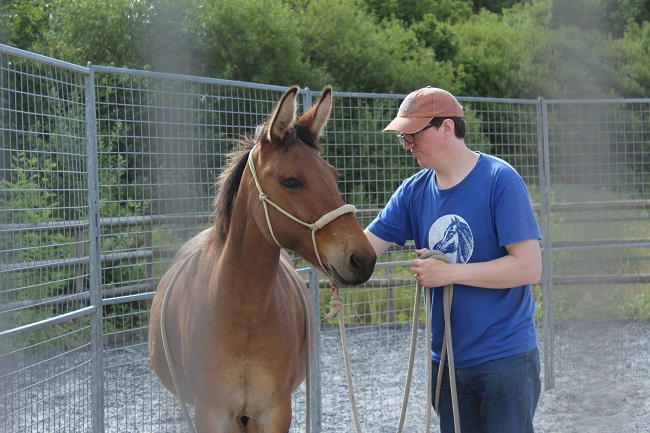 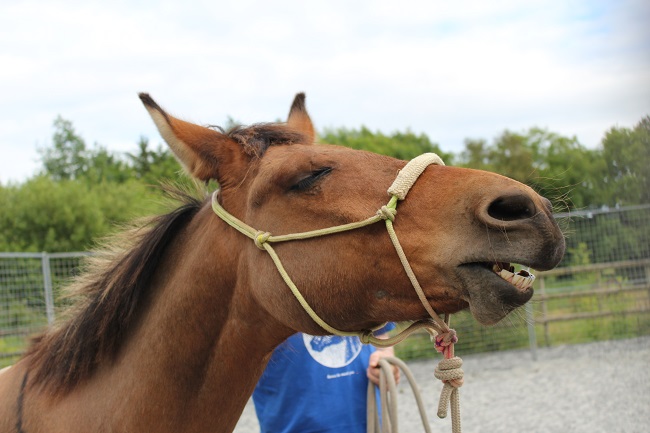 Turns out, Ben’s not so bad when he gives scratchies…

I also did some handling with Marty, too. As this was the end of his final week, Anna was keen to hand over to me and make sure that I knew how to carry on the work she’d started with him. I hadn’t actually handled him since I unloaded him at Anna’s 6 weeks ago, and I was pleasantly surprised with how he felt. He still took himself away once he saw me coming with his halter, for example, but the actual haltering procedure was so much calmer than before. I no longer felt like we were balancing on a knife-edge.

I also got to have a go at leading him through the curtain. He’s still not keen on doing it by himself, which is why Anna leaves it tied up when she’s not around to help him with it; it would be unfair to leave it down, as he wouldn’t accept it so it would be no different from putting a fence there. 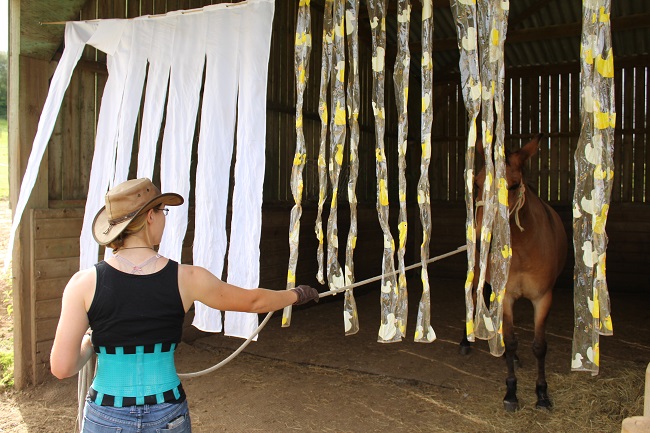 I’m not hauling on him here; I’ve set up a feel, and am waiting for him to follow it. I moved from side to side to help him search. He responded and walked through nice and calmly. 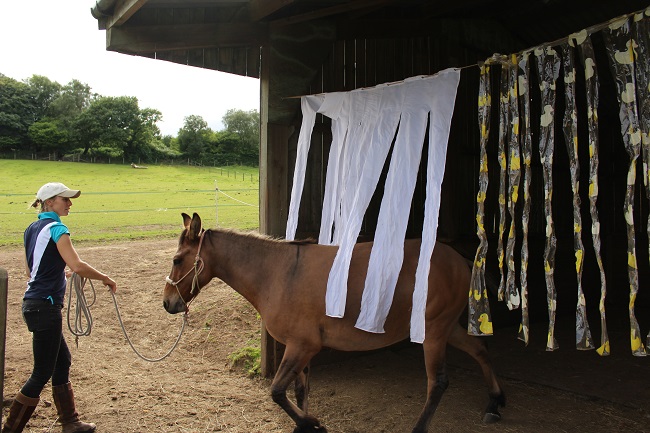 I don’t have any photos of me leading Marty through, so here’s one of Anna. He found it easier with her, I think because by now he trusts her more than me – he’s no fool!

He can also back-up through the curtain, too. That’s a really great change. Backing up towards something that bothers them is usually more of a concern than approaching it head-on.

The work with the curtain was the first in a series of exercises that helped me to understand the concepts of feel and firming up. Both of these were things I thought I understood, but was in fact merely skating around the edge of.

Anna said, “Don’t be afraid to firm up while he’s feeling safe. Then when he starts to lose it, it will mean something [when you firm up]. If you haven’t firmed up before then it won’t mean anything when you need it to.”

There’s a sweet spot between terrifying your horse or mule and allowing them to call all the shots. Some people believe that telling a horse no – stopping it from grazing while being led, for example – is cruel, but I personally feel that not setting boundaries is where the cruelty lies. When done properly and with good timing, it provides a sense of security.

If Marty understands what is being asked of him, then it will help him feel grounded when he finds himself in a situation that might otherwise unravel. So when leading him to and from the arena, I practice to make sure he’s actually listening to me. I can’t teach him anything while he’s under stress, but if I teach him while he’s in a safe area, it’s more likely to help him in a stressful moment.

However, there are times when you should firm up and times when you shouldn’t – knowing the difference is the tricky bit! The curtain was a time when I shouldn’t. Marty was unsure in that situation, and getting firm would only have compounded the issue. That is why I set up a feel and did all I could to help him search for the right answer.

Even when I do need to firm up, I should always give him (or any equine) the chance to make the right decision first. It may only be a few seconds, but if I came in firm straight away, it would put him on the defensive immediately and it wouldn’t show him what I wanted him to respond to. 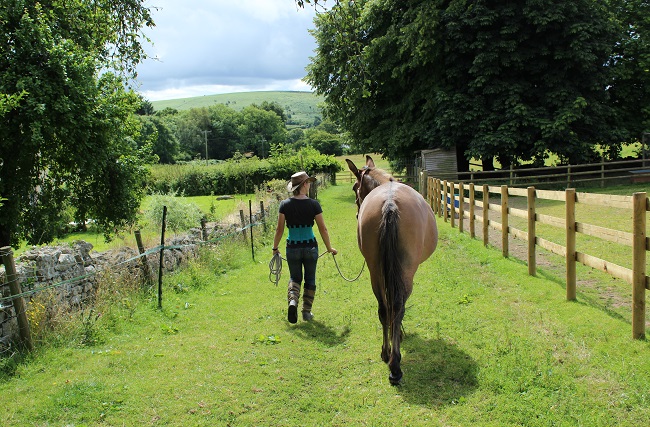 Heading down to the arena for our final session of the weekend.

In the round pen, I worked on approaching Marty like a crazy person (he should be used to this by now, right?). Anna had me do things like walk towards him while pawing at the air (oddly reminiscent of a drowning person, I thought), approach while jumping up and down, and my favourite, drunkenly stagger up to him. Once I’d reached him, I would just stroke him. Marty has a lot of concern over sudden movements, raised arms, and people approaching him with any amount of energy, so this was all good stuff to work on. 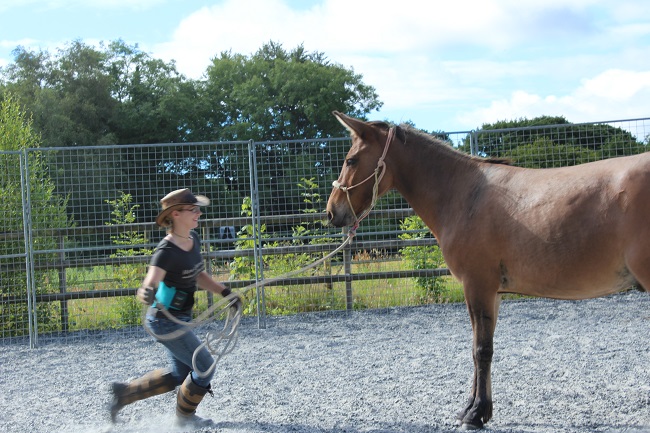 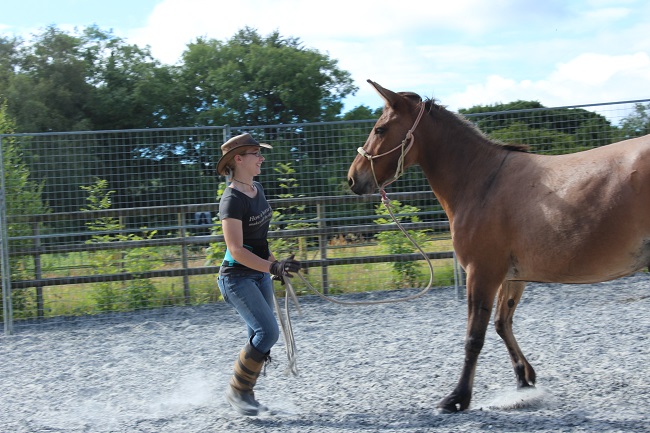 He didn’t react at all to me jumping up and down, but my drunken kung fu was slightly concerning to him. To be fair, I did take Anna’s command of “pretend to trip” by actually tripping over. It’s method acting! 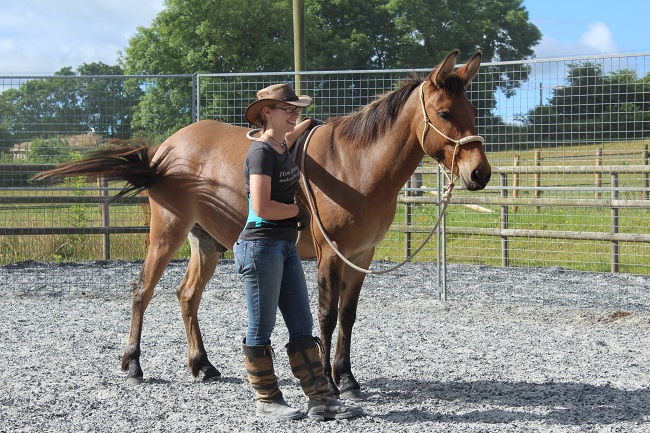 He’s pretty used to my weirdness.

The big thing I got to work on was catching. Marty is probably never going to be the sort of mule that you can just approach and throw a halter on in the pasture – and that’s alright. In previous weeks I had seen him walk away from Anna and felt disappointed, as though I was expecting him to have suddenly had a personality transplant. But I hadn’t felt what he was like once the halter was actually being put on.

Anna’s method is to catch him with the neck rope, bring him down to the barn, and then halter him. This is an area where being loud and energetic with my movements – such as what Ben and I were practicing in the round pen – is NOT a helpful thing! Like firming up, it’s a thing that almost sounds contradictory but just depends on what is there in front of you.

Anna suggests that I continue my method of directing him in to a smaller area before attempting to halter him. 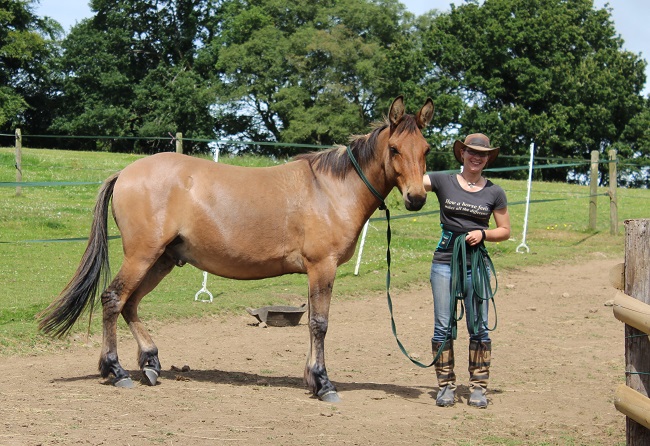 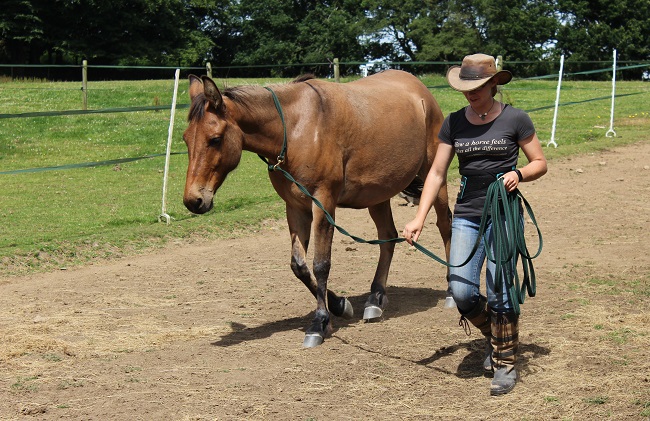 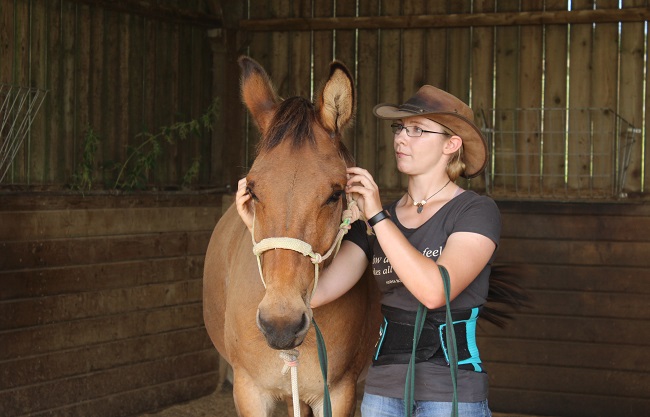 He’s coming home glossy, happy, and with a much better skillbase than he had when he left.

I know I’ve said it many, many times before, but I feel it’s worth repeating because it still astounds me: in two years of owning Marty, I have learnt more about horsemanship than in the entire two decades previously. I use “horsemanship” rather than “mulemanship” for a reason – mules are still quite baffling to me, but the more I understand Marty, the more I understand his short-eared cousins. It’s like somebody suddenly turned the subtitles on.

I don’t mean to suggest that I am in any way competent – I still know less than Jon Snow. I guess what I mean is that I now have a much better foundation for learning. Spending the first week with Anna, and then being able to go back and spend further time learning with her, was a real privilege.