On Wednesday I decided to pick up where we left off with saddling, now that Marty’s issue with the halter seems to be under control! He’s been lovely to catch and, on Wednesday evening, was particularly good as I entered the field away from where the herd were waiting and Marty actually pushed his way through the horses and hurried over so that he was waiting for me. He seemed eager to work and didn’t hesitate about leaving Cash and Iris behind as we headed over to the arena.

If Marty’s entire life consisted of scratchies and grass, that would be alright with him. 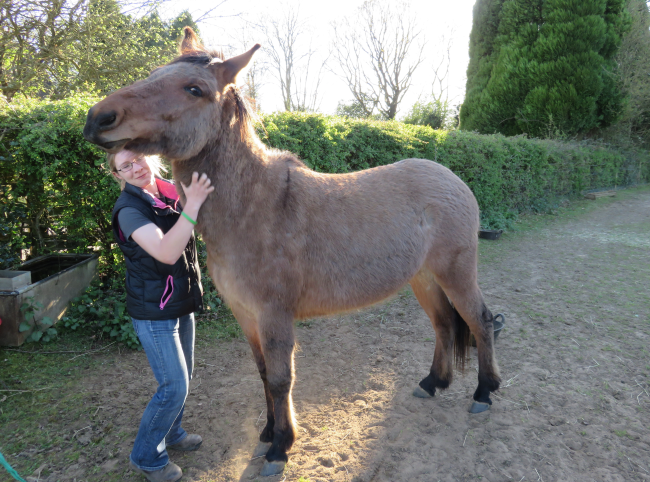 Ben was attending this session as he wanted to see how we were getting on – I’ve been doing the majority of saddle work on my own – and where we could go next with our training. I’m very glad he was there because it all turned into a bit of a fiasco.

I put the saddle on without incident, did the girth up, paused to check that Marty was still alright, put the girth up another couple of holes, paused again, then put the girth up another hole and this time stopped to give Marty some neck scratchies. The girth still had another couple of holes to go up before it was really snug, but I didn’t think to tighten it yet as I wasn’t going to ask him to go anywhere – just stand and be loved on. He enjoyed the attention, but then took a few steps forward and asked for butt scratchies. I complied. And Marty … well, I don’t know what happened. All of a sudden he sat down on his haunches, tucked his bum underneath and shot forward so that the leadrope – which I still had hold of – was over his back. The next sixty seconds involved him leaping up and down, pulling free, and sproinking around the arena with the saddle clinging to his side before coming to a halt in one of the corners. Ben was able to approach him and push the saddle back into position, which Marty was surprisingly compliant about.

Had I been on my own, I would have taken the saddle off; so it was lucky that Ben was there, because he explained that doing so would have shown Marty that bucking and rearing were the answer to removing it. Besides, the saddle had become jammed against Marty’s armpit and the only way to undo the girth was to put it back where it was supposed to be. With the saddle in place, we resumed what we would have done if there had been no incident. Marty was absolutely fine and walked around the arena like nothing had happened.

However, when it came to removing it, Marty stood for the girth to be undone but then panicked and shot off sideways as the saddle was lifted free. We then spent some time approaching him with the saddle, touching him with it, rubbing him with it, and then putting it on and off until he could tolerate it. Basically, we went right back to basics. 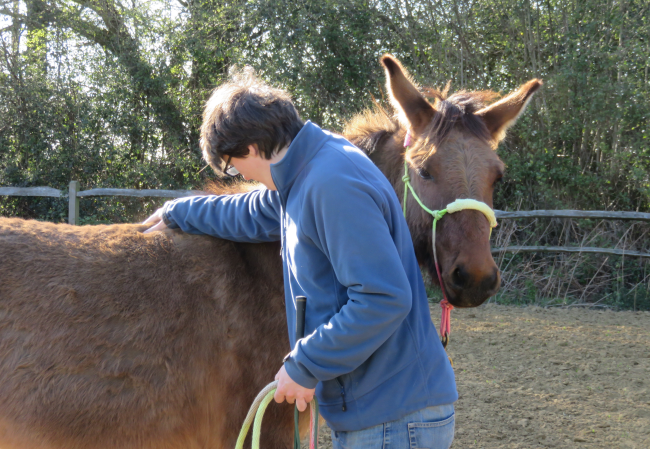 I was quite disappointed, with myself more than anything. I really thought this saddling business was one of our achievements! I’d been so careful to do everything slowly and properly; introducing him to the saddle pad and rubbing him all over with it, touching him all over with a rope or a flag, using a rope to simulate a girth being done up, showing him the saddle, doing up the girth … and I’d made sure to walk him around with every single step of the process, to make sure that his non-reactions weren’t because he’d just shut down and rooted himself to the spot. With the saddle and girth on, he’s trotted, walked over poles, climbed up and down banks, and had the stirrups dangle loose – and he has handled every single thing without incident. So I have no idea what elicited his response on Wednesday.

The next two evenings I did other things with him, as Ben was working late both days and I didn’t think it wise to try the saddle again on my own. On Thursday Marty and I played “Hollywood Mule” (I’m trying to teach him to stand on a mark. I’d started with a tree stump but I think this was a bit too much to begin with, so now we have a paving slab!), and then herded some pink-footed geese that were out on an evening stroll across the field. On Friday we went for an easy stroll down to the common and back.

Making sure that he is about to move – sensibly – while having the string on him. 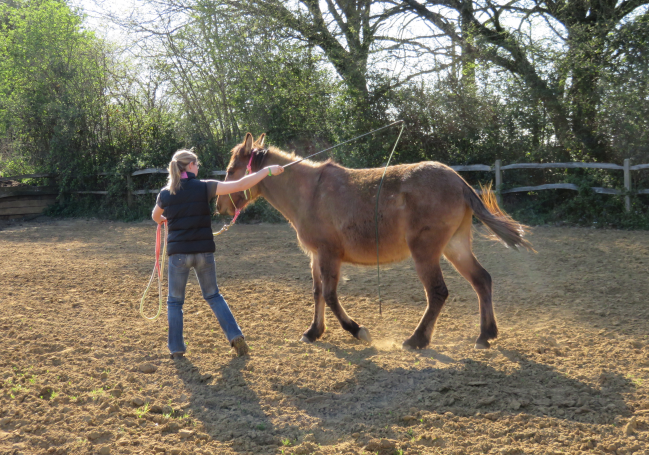 Today Ben and I tried the saddle again. We left the saddle on the gate and used the stick and string for the first half of the session, as Ben had noted that Marty was still quite twitchy about being touched around his haunches; he was also very upset by anything touching the saddle while he was wearing it, although he could tolerate the leathers being slapped around or the skirts being lifted. I’d expected some silliness but he was actually really good, and was able to be touched all over with the stick and have the string trailed over his back and haunches.

We were also working on intent; showing him that we could move the stick around and do weird things with it and it didn’t effect him at all, but also that we could use it to ask him to walk on or back up depending on how we used it. 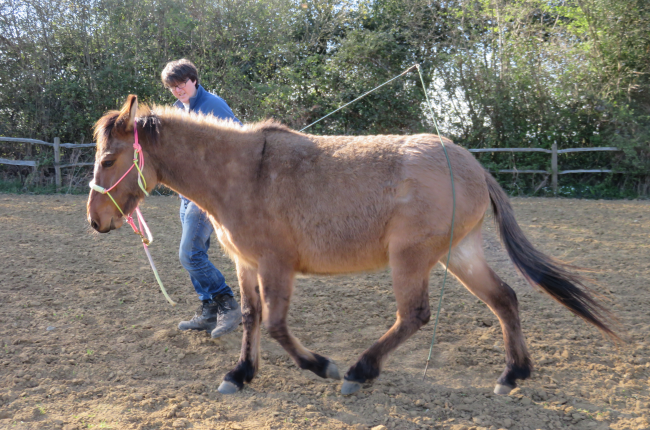 He backed off once the saddle became involved, but was much better about having it on than I’d expected him to be. He tried to dash out sideways once or twice when the saddle was removed, but there was no leaping around this time. In fact during one of these dashes Ben accidentally dropped the rope, and Marty stopped and waited for it to be picked up again! Ben put the saddle on and off several times and had him walking around the arena with it in place (without the girth – Ben kept a hand on the pommel to stop it sliding, or in case he needed to stop it flying off and adding to the trauma if mule objected at any point. He didn’t!).

We used the treeless saddle this time, because Ben maintains that it is lighter (I don’t agree!) and easier to put on and off (it has a useful handle on the pommel). The tail swishing lessened as the session went on, by the way. 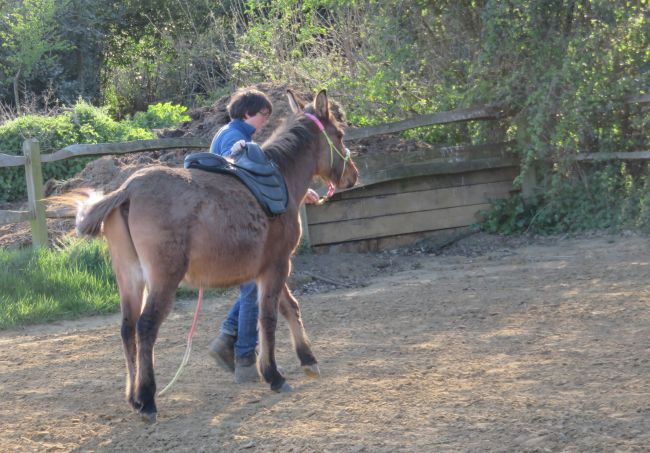 So although it felt like we had had a major setback on Wednesday, Marty handled today’s session remarkably well considering that it had been a very scary experience for him to go through. And if this just means that I need to go back over our foundation and put more work into making that completely solid … well, maybe that’s all Marty was trying to tell us.

He never used to be very snuggly, but now he tolerates being hugged and kissed so much that I might even speculate that he likes it … although he would draw the line if he knew I was using my new paint program to add hearts to his picture. It had to be done! I’m not sorry! 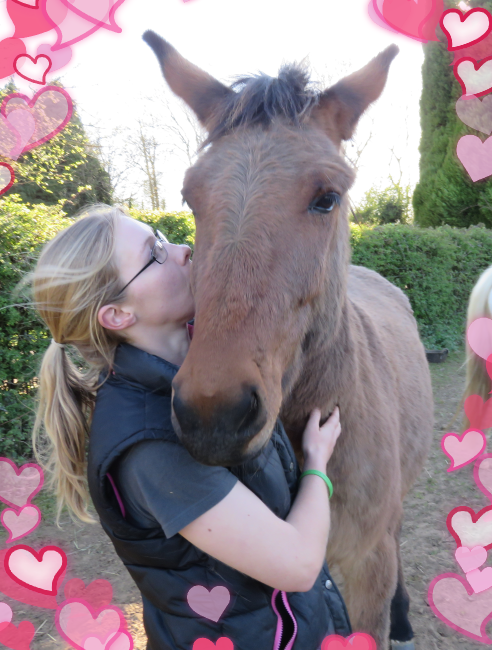