Today was Marty’s 5th birthday! He celebrated by wearing a halter.

YES, YOU READ THAT RIGHT. I walked into the field, he pushed his way between the horses to reach me, his ears remained pricked throughout and when I showed him the halter he began to gently play with it between his lips. This is not his usual reaction to being shown the halter. His usual reaction is, at best, to put his ears back and wrinkle his nose; at worst, he just runs away.

There were five candles. But I spectacularly failed to show all five in any of the photos I took. 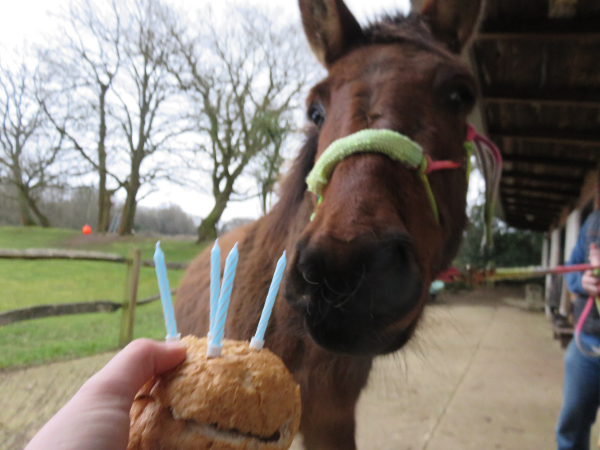 I was able to put the halter on with no problem at all. He also moved off perfectly when I did – which I think is due to all the work I was doing with the neck rope yesterday. I mean, he knows that stuff anyway, but I feel sure that yesterday’s session helped to remind him.

His reward was to be grazed in hand on the lush grass by the arena, taken down to the yard and given a good groom, and then … wormed.

We did a worm count a little while ago and discovered that, although the horses were fine, mule had a very high burden. Of course my problem then was a) I can’t catch him to worm him, and b) when I do catch him do I really want to reward him by sticking a load of yucky medicine down his throat? My initial response to that was no, I don’t. But then I consistently failed to catch him, and I decided that I may as well do the Horrible Thing while he was already convinced that I’d do the Horrible Thing.

His ‘cake’ is a wholemeal bun full of his favourite coconut treats, by the way. 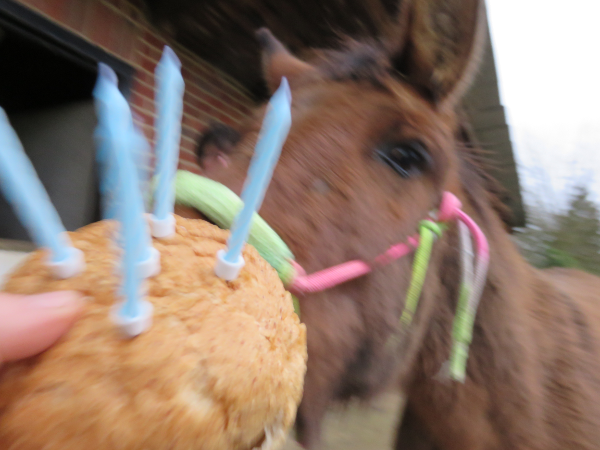 But it wasn’t as much of a drama as I was expecting it to be. In fact, it wasn’t a drama at all. He was absolutely perfect with the weigh tape – that’s down to all the rope desensitisation we’ve been doing with him! – and comes in just shy of 400kg. He backed up a few steps as I clumsily attempted to put the wormer tube in his mouth, but there was no violent reaction once it was in. He didn’t even grump at or punish me afterwards, although he did accidentally chomp my finger while I was feeding him his you’re-a-good-boy apple immediately afterwards.

This is the kind of running around we like! He’s chasing after me and the horses as we race up to the top of the field to move the fenceline. 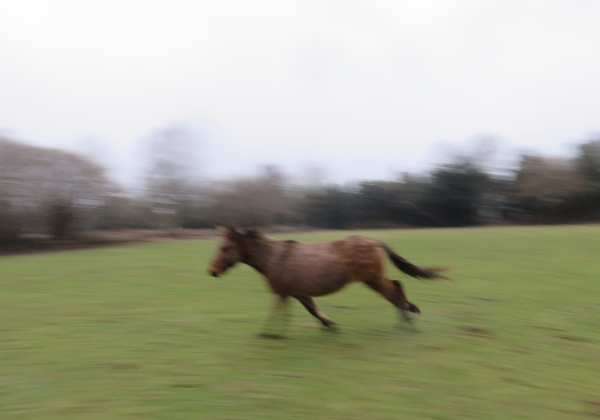 So he had apples, he had grass, he had treats, he had scratchies, and he had a birthday cake. All in all, a pretty good day for a mule. Hopefully next year, we’ll be able to celebrate by going out for a nice ride. 🙂