So after yesterday’s debacle, for round two I brought in the big guns and Marty had a long conversation with Ben.

I tried to see if he’d be caught by me, first, but he wasn’t interested; as with yesterday, he would approach me and stand for scratchies and let me start putting the halter on, and then he’d just leave. Because he wasn’t pulling or spinning away, I later asked Ben if I should be trying to hold onto him; but Ben said I was right to let him go. Trying to hang on with a little bit of rope round his neck just added stress to the situation, and if the mule decided to leave at speed – which he did if I held on – then there was no way I was going to keep hold of him anyway.

Mule would really like to be standing where Cash is. 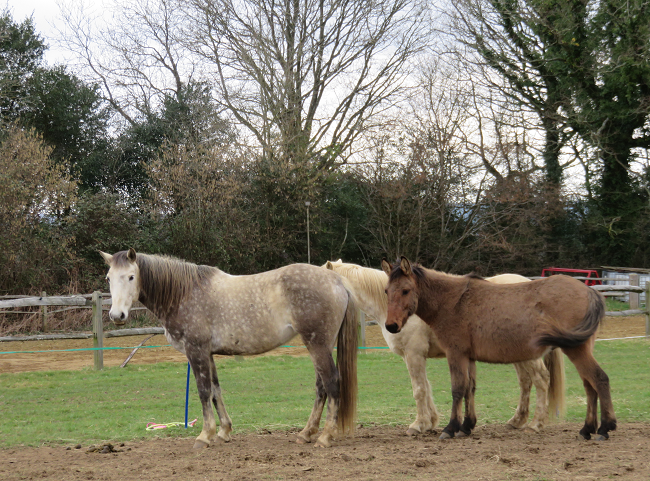 So Ben took over. The mule tried his usual trick of antagonising the horses and getting them to run around with him, and it was rather chaotic for a while until Iris lost her patience with him and started trying to herd him back to us. Eventually the horses were able to break away and then they just stood calmly by the gate and let us deal with our errant mule. They are very good horses.

Marty tries to move Cash around and use him as a shield. 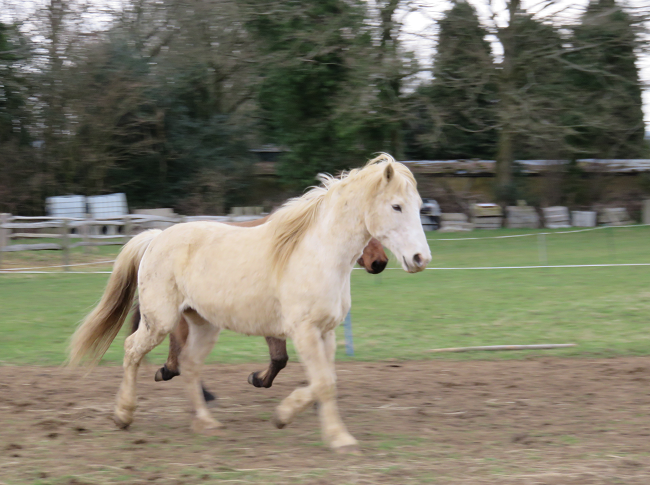 Marty ran for a bit and then decided that I was the lesser of two evils and came over to me, which Ben rewarded by backing off and leaving him alone. After a bit of backwards and forwards I was able to put his halter on pretty easily and he was taken out of the field and allowed to hand graze for a few minutes.

They are a good looking pair! 🙂 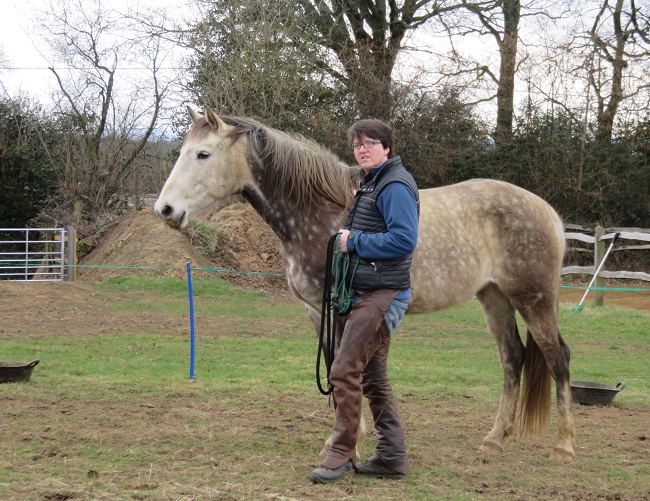 This would be Marty’s “haters gonna hate” trot. Just look at that sidelong expression. 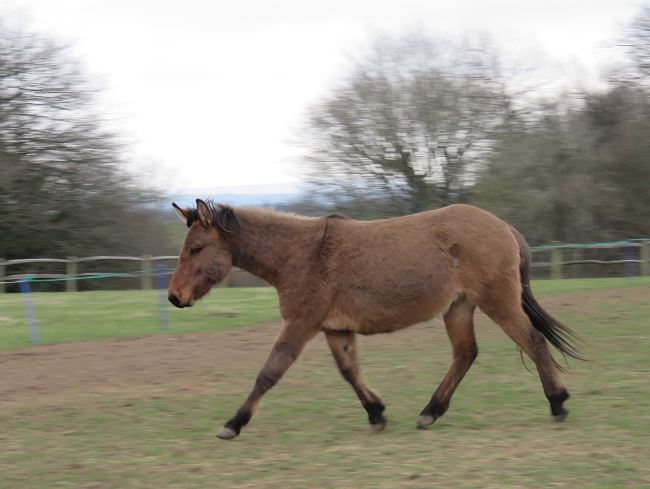 And his “pre-chunkering” trot. The nose goes up, the trot becomes bouncier, and before you know it the angry fat man is back. 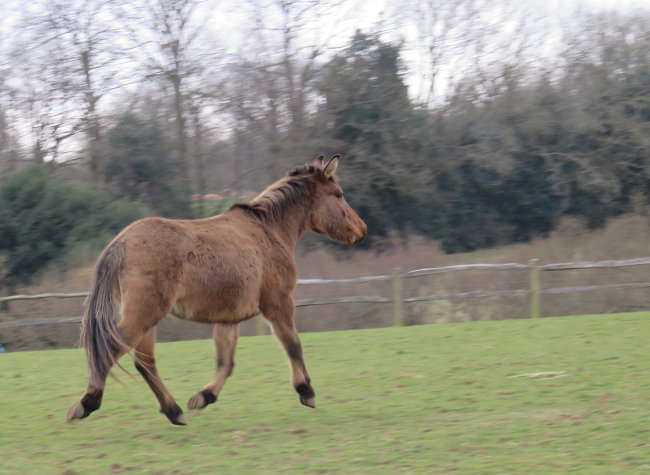 …I’m mule-braggin’ again, but honestly. He is one handsome mulo. 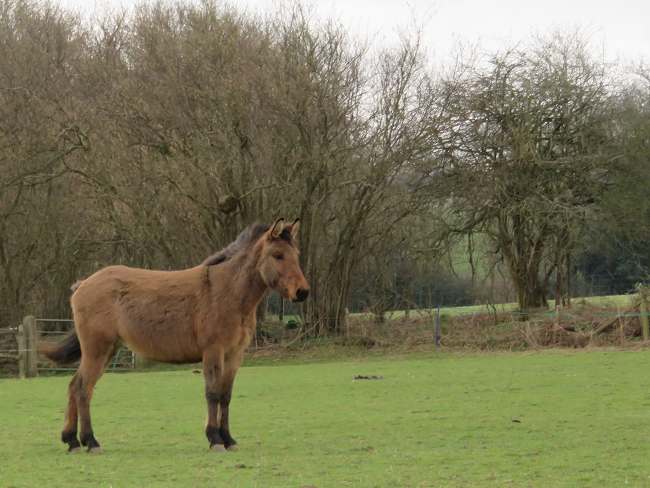 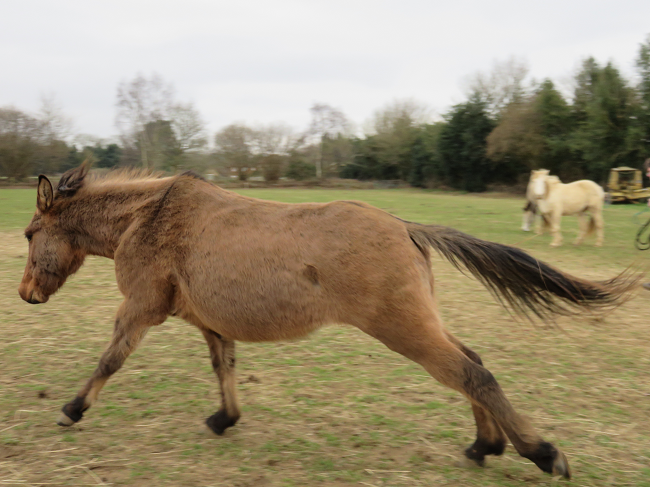 The next stage involved Marty being taken into the arena and having his halter removed. Ben told me to try putting it back on, which I was able to although Marty had to retreat a few steps before he’d stand still and allow me. I did this a couple of times and then Ben suggested I try walking away and coming back to him, then putting his halter on. Marty followed me at first, but when I started to head back into his space he turned away and left … so he became Ben’s problem, again!

I was fascinated to see how quickly Marty hooked on to Ben. Considering that he isn’t very keen on Ben and usually does his best to avoid him, for reasons known only to his impenetrable mulish mind, he instantly started following Ben across the arena when Ben asked him to. I would have expected him to do that eventually, but he didn’t try coming over to me for sanctuary or running off to check the gate (which he’s sure he can jump) or any other evasive techniques. There was still a bit of running around when the halter was introduced, but Ben eventually caught him – which is the first time he’s been able to do that since Marty came to stay with us.

Maybe we can be friends… 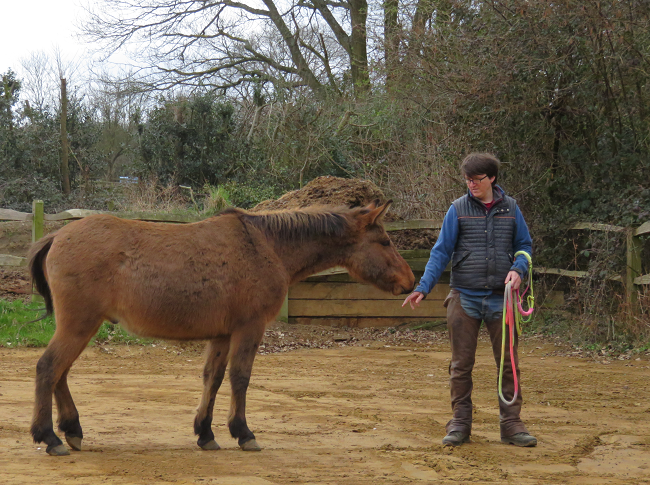 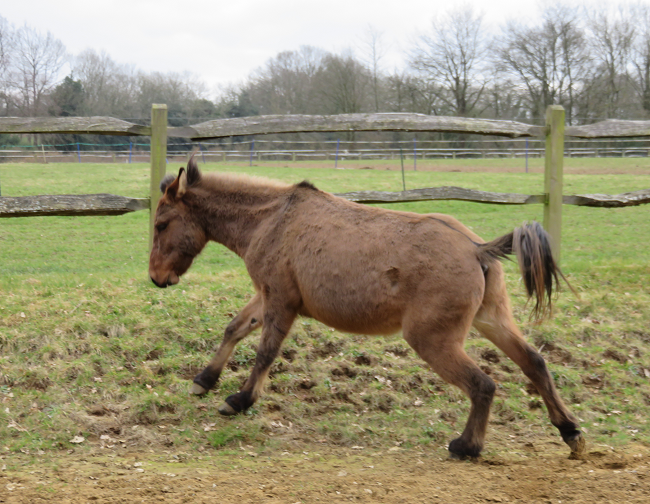 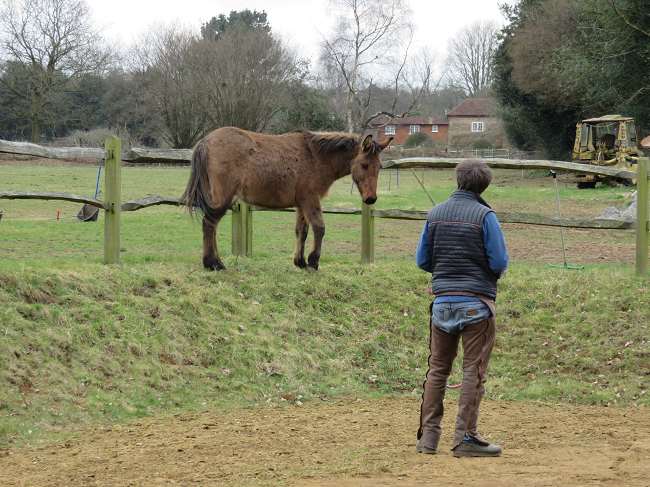 Licking and chewing … or just expressing his disdain. 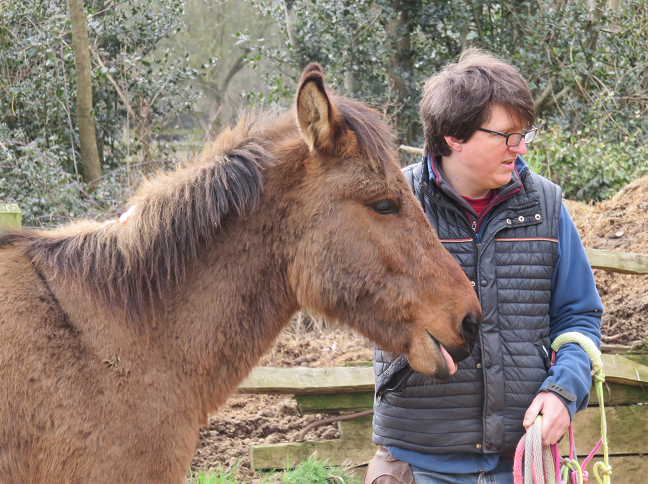 Finally! Ben is allowed to halter him for the first time in nearly 12 months! 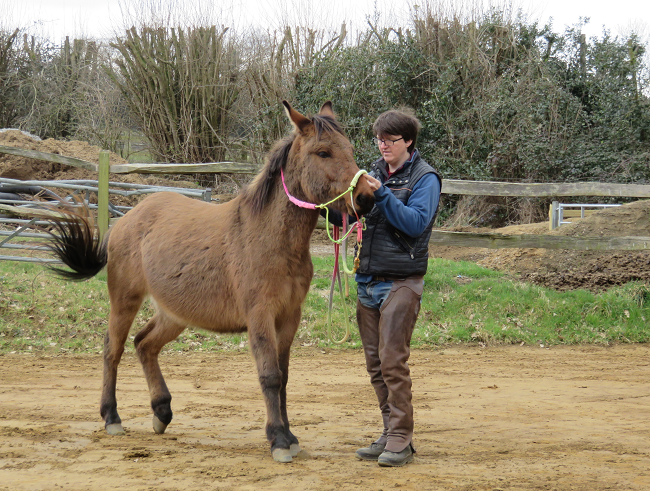 Ben explained that Marty was happy to come to us, but he couldn’t tolerate us coming into his space: his interaction with us had to be on his terms. Obviously, this is not practical, and we need to change his ideas on this matter. I suspect the reason I’ve had such a successful fortnight in catching him was purely because I’d started asking him to come to me, and it just happened to be his whim to comply for those two weeks! I mentioned how frustrating it was that he would suddenly decide not to be caught – after all, the last time I haltered him, we had a lovely time and he seemed genuinely happy and relaxed. Ben said Marty just doesn’t like us interrupting what he thinks he ought to be doing; he likened him to a teenage boy who would much rather be playing on his X-Box than doing chores.

Pretty boy showing off his moves. 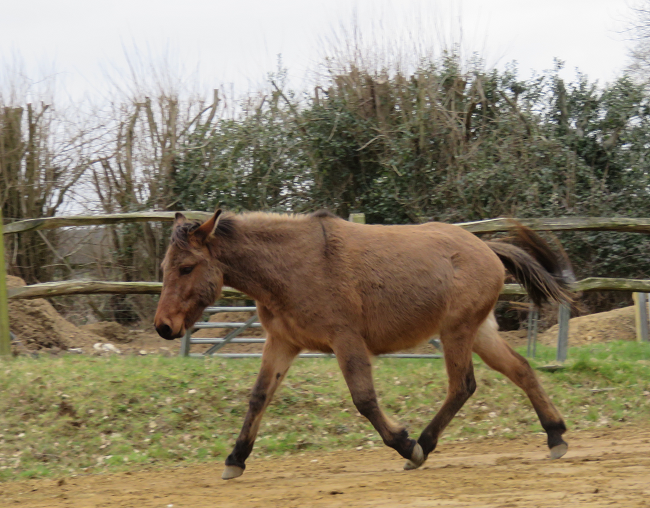 There’s that Iberian side… 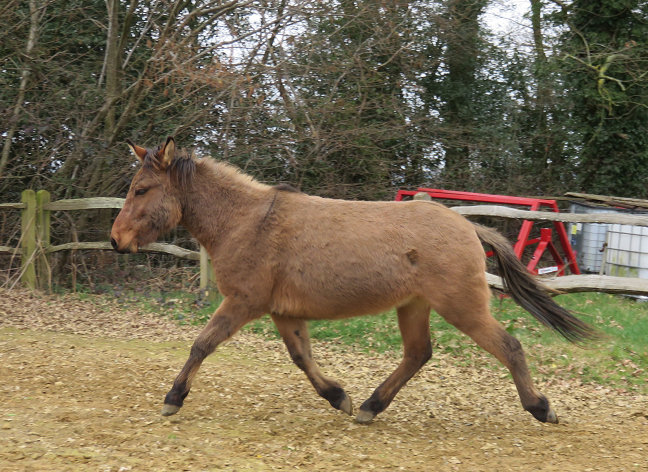 When Ben changed the game and started approaching Marty to halter him, rather than asking Marty to come to him, the mule got very angry and there was a lot of running around. He ran to me several times and tried to use me as a human shield, and he also leapt up onto the corner bank several times. He likes it up there; it’s pretty much his favourite spot. 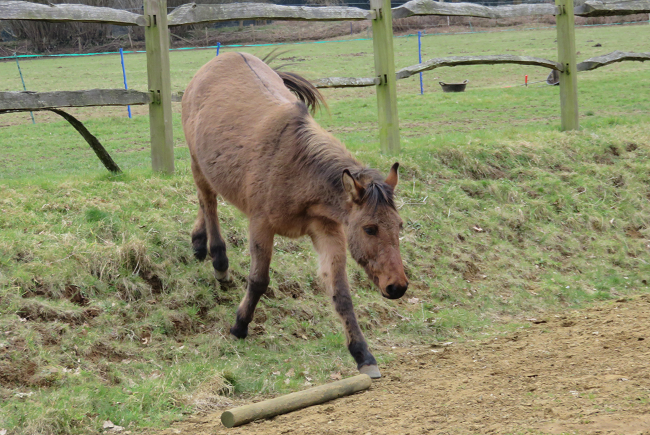 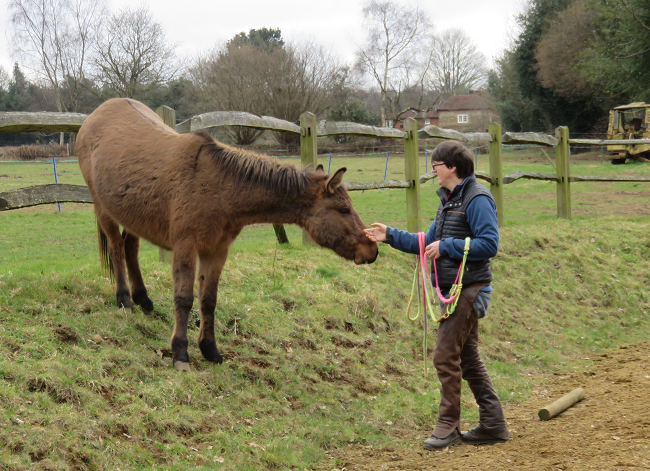 Once he realised that we weren’t going to let him do what he wanted, he started getting grumpy. He never came close to hurting anyone, but there were a lot of kicks at imaginary ghosts and charging down the bank with his ears back, like here. He also decided that walking up to Ben with his ears pinned was a good threat, until Ben responded by mirroring mule’s body language and blowing at him. Marty’s response to that was very funny to watch. 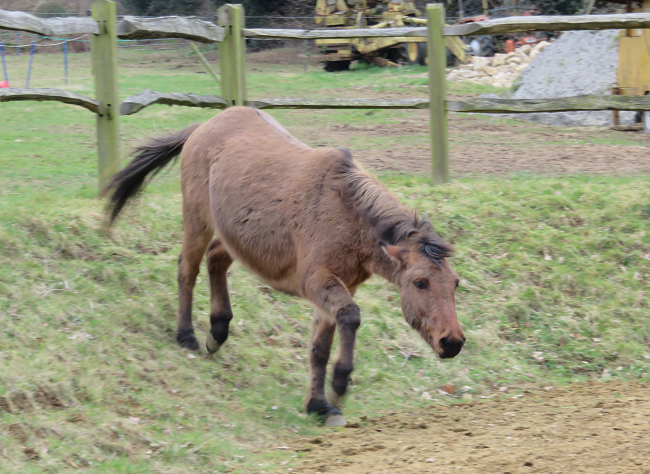 “I am a wild and untamed mule, you will never curb my spirit! FREEDOOOOOOMM!” 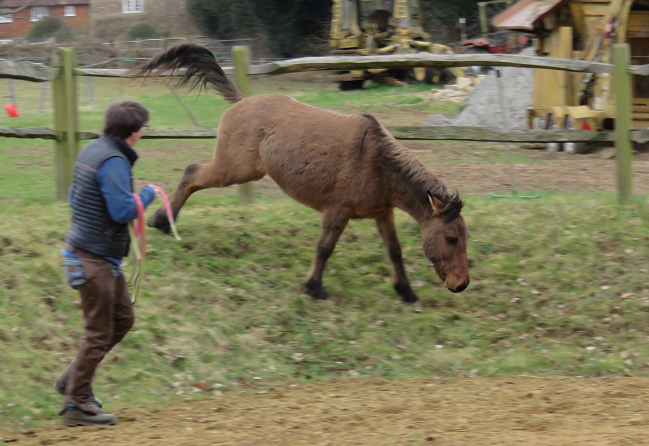 Running over to me … naughty little belly. 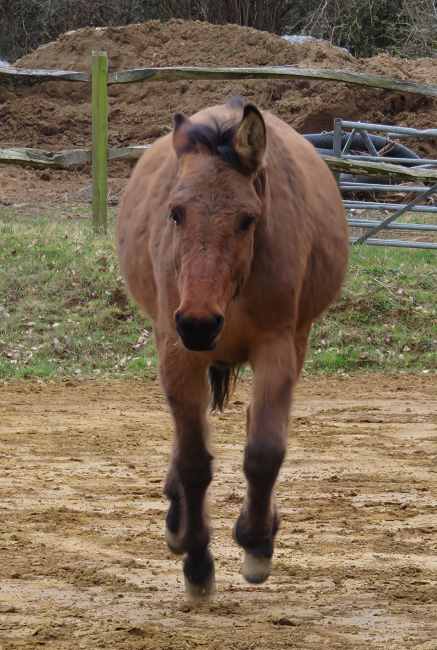 Anyway, long story short, after two hours of being in the arena I took over again and approached Marty to halter him. I did this several times until he could stand still when I walked over to him, and then we called it a day. Ben would have liked me to have done it a few more times, but it was bitterly cold and my hands had long since turned blue! I’m not convinced that the problem is solved, yet; Ben says he thinks it will take a couple more sessions before the idea sinks in. At the very least, Marty may think twice about running away the next time I try to catch him. Being caught and taken out for a half hour walk is much easier than spending three hours charging around!

Mule can be sweet when he wants to be. 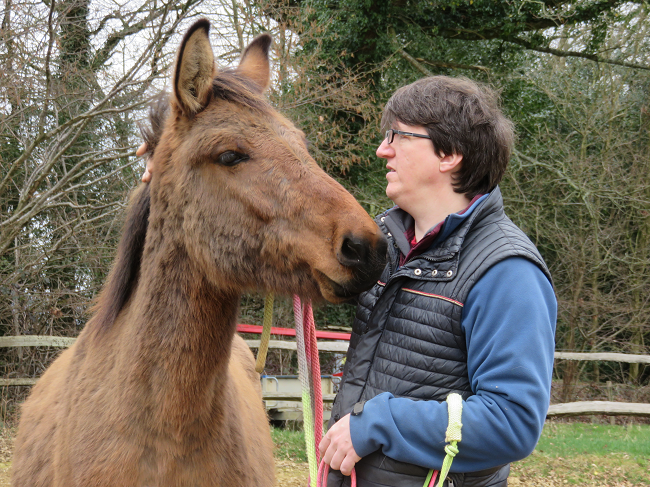