Things Marty has taught me:

Humility is one that comes up time and time again, and I have to say it doesn’t get any easier to acknowledge and own my mistakes – particularly not when I often have to do so publicly. I feel a bit like I’m being made to stand out there with a cardboard sign round my neck, describing my failings to friends and strangers alike (owner-shaming should be a thing).

“I don’t make you look stupid, you are stupid.” 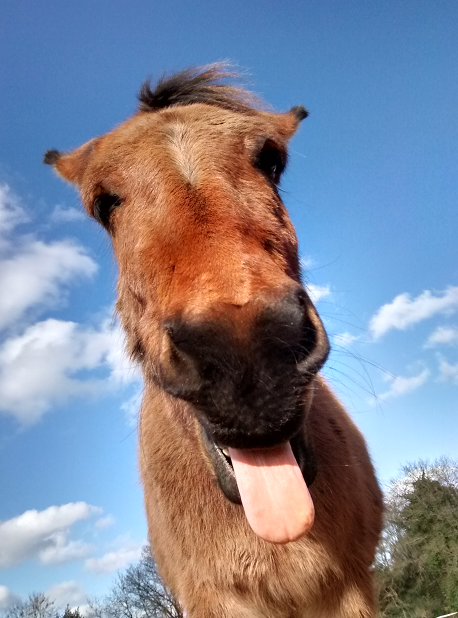 However, if we never acknowledge our errors, how can we fix them? How can we help others, who may have found themselves in a similar situation, suddenly think: ah, maybe that’s the problem?

My latest blunder involves that timeless issue of ours, catching. Marty has always been a little funny about having his halter on, and way back when I first got him I thought that it might be sensible to have his back checked out, just in case. But as he was pretty twitchy and wary of strangers, I also thought that I would wait until he was calmer and more workable (those early, optimistic days!). I had horrifying visions of an unassuming chiropractor sent sailing through the air on the end of one of those legendary mule kicks.

In the meantime I couldn’t not catch him, so I set about treating it like it was entirely a behavioural problem. And then I guess I kind of forgot that it might be physical, or became so fixated on the issue that it was hard to step back and really think for a minute.

“What do you think you’re doing with that halter?” 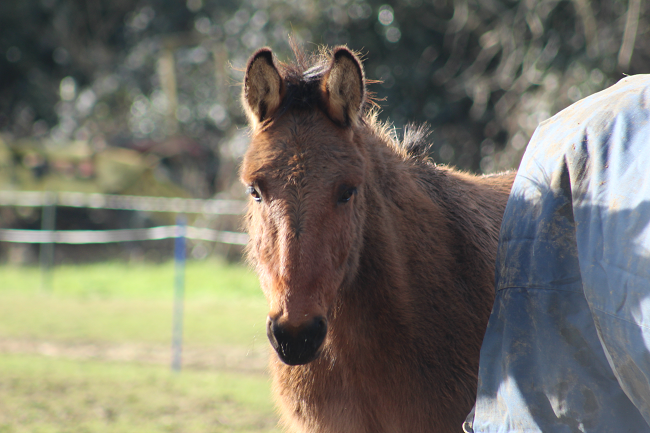 Today we had a visit from Celina Harrison, a McTimoney practitioner based here in Surrey. I had described our issues to her – that difficult mix of being completely honest but also trying not to scare our rescuer away – and asked if she could help. She explained that McTimoney is a really gentle treatment and is often accepted by even the very head-shy, although of course every animal is an individual and would be assessed as such; this seemed ideal to me, and so an appointment was made.

I called it Marty’s spa day, as he and the horses had a pedicure booked with Emma in the morning and I kept them in all day as it was raining. I wanted to try and get Marty as dry as possible for when Celina arrived. He responded so well to being vigorously towel-dried that I felt like I could probably go one step further and put Iris’ waffle rug on him – and lo and behold, I could. His first time wearing a rug! I didn’t do it up as it was obviously too large, and I didn’t want to risk him getting tangled up if he objected. But he wore it and listened to the buckles jangle and felt the surcingles swing, moved around a little, and then stood calmly while I folded it backwards and slid it off over his rump. I have been using clicker with him on a more regular basis and he seems to be responding very well to that. 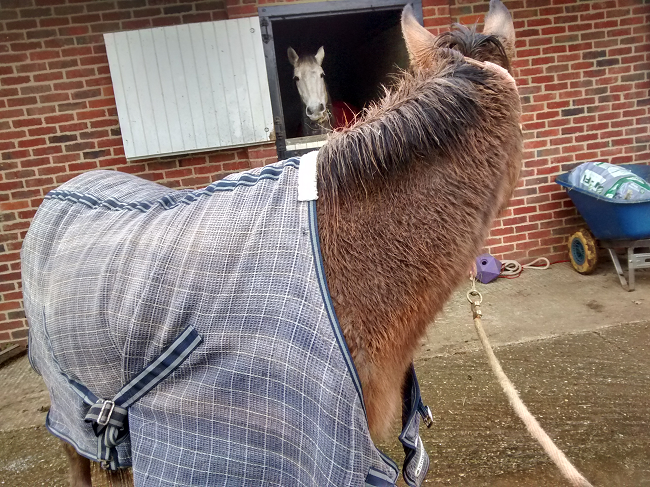 Celina would normally work starting at the poll, but she could see that this would be a difficult area for Marty – she pointed out right away that his atlas joint was out of alignment, and that she could feel heat in that area. So instead she worked backwards, first fixing his pelvis which had dropped on one side, and then realigning some of the vertebrae near his sacroiliac joint. He was not keen on having his neck adjusted but he was a big brave mule (far better behaved than I am when I see the chiropractor), and it was obvious what a relief it was to him when he began to lick and chew or let out a big sigh. He did try very hard to maintain his “I am not enjoying this, not one bit” demeanor, though. I find it’s often easiest to let him think he’s fooled me when he does that.

“HA, did you hear that story about the girl who thought she could outwit a mule?” 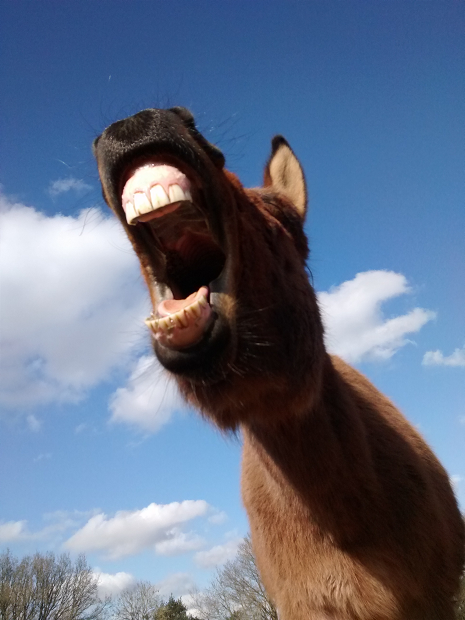 The conclusion, then, is that Marty had a very real excuse for behaving the way he has. It doesn’t quite explain why he’s worse in changeable weather and particularly in late winter, except perhaps those conditions makes his misalignments ache more? I feel that there may be some kind of allergy issue going on, so we will investigate that too.

I obviously feel pretty bad for not getting this sorted sooner, and especially for being cross and frustrated with him during the countless times he’s pulled away or just refused to be caught at all. I don’t expect this to be an overnight fix – he will need further treatment, and will have to learn that it no longer hurts to wear a halter – but we have an explanation, and can build on that.

“I did then what I knew how to do. Now that I know better, I do better.” ― Maya Angelou 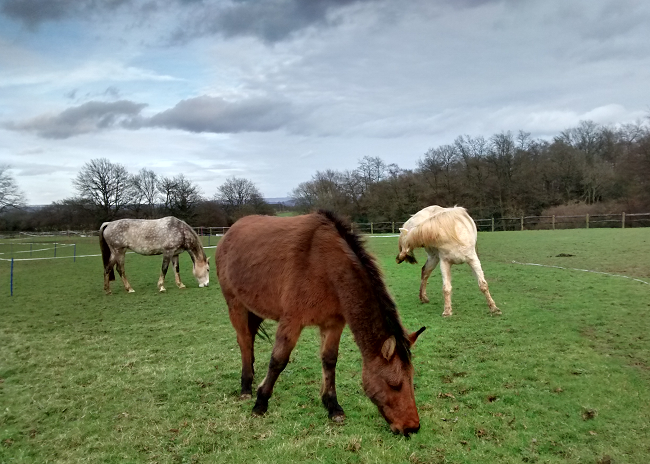 1 thought on “Marty gets his back fixed”