It feels like summer has suddenly bloomed. A bridleway, which I last cycled down five days ago, has impetuously lined its already narrow track with handlebar-height nettles – prompting me to perform a one-handed balancing act as I wobble my way down it. Where did they come from? What do they want?? The lane up to the Punchbowl has turned into a huge green tunnel, and weeds are growing around the edges of the hay field like … well, weeds.

I’ve been doing a bit of foraging lately for the benefit of the herd. When they’re in the front field they can help themselves to an array of interesting treats – hawthorn, bramble, cow parsley, cleavers – but the hay field doesn’t have quite such an abundance. Or at least, not in the area they’re currently grazing.

I started out by picking dandelion and cleavers to put in with the grass in Marty’s munch net, but after discovering a huge patch of cleavers between the arena and the muck heap, I began pulling up handfuls of the stuff during my twice-daily trips to the poo pile.

As it turns out, cleavers fall into the category of, “Things Marty Will Eat If He Finds Them For Himself, But Not If He Thinks I’m Giving Them To Him”. Of course they do. I’ve been getting around this by casually dropping them in his paddock and acting like I haven’t even noticed. 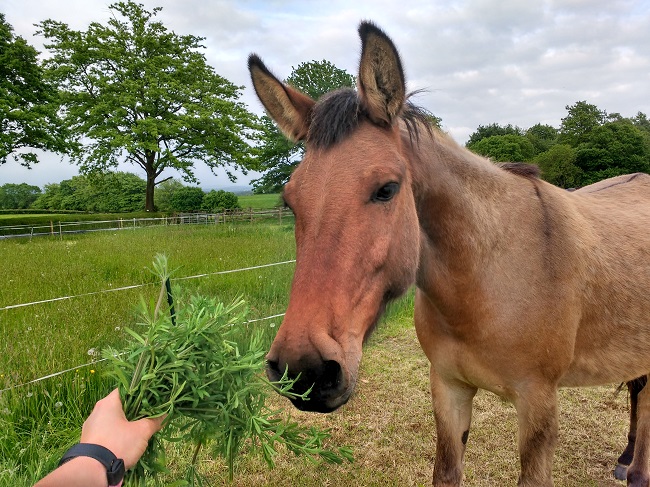 Marty suspects me of attempted mulicide. 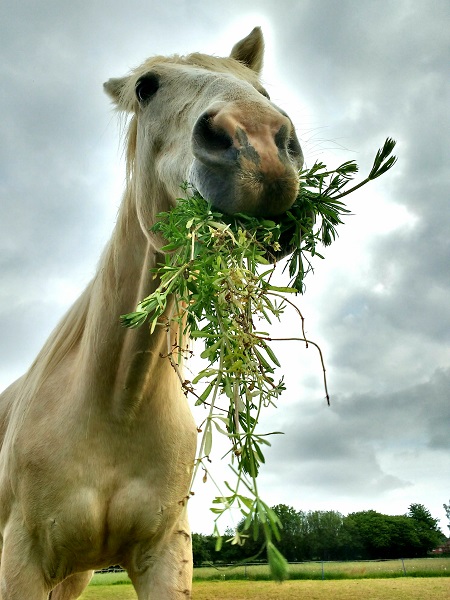 Fortunately, Cash has no such qualms. Food is food.

We did some arena work on Wednesday, practicing our disengages, lining up on the mounting block, and a little bit of work with the rug. Marty wore Iris’ waffle rug several weeks ago, but I’d really like to get him wearing a rainsheet. Unfortunately, the rainsheet makes that terrible crinkly sound which is so abhorrent to him. I was able to get him to a point – by breaking it up into small steps and doing something different inbetween the steps – where I could chuck the rug, folded in half, over his back with surcingles swinging. I was deliberately clumsy and ‘loud’ in my movements with this. 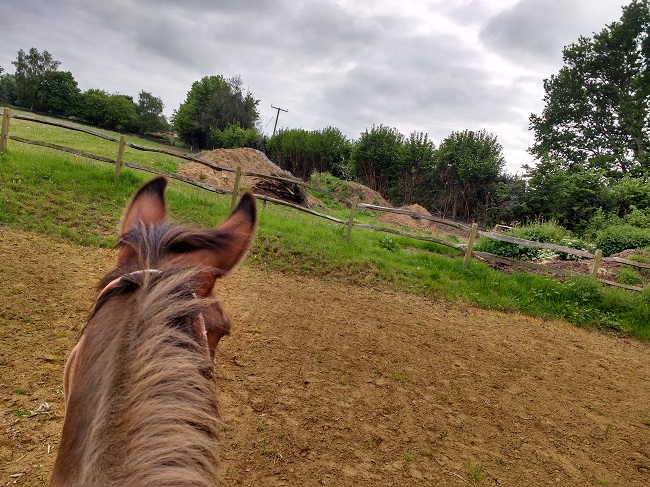 After that we did some circle work, and I noticed his energy was picking up every time he went past one of the leafy corners. I wondered what would happen if I picked up my energy at the same time … I guess the result was a pretty obvious one.

He charged around a bit, but I just waited him out and then calmly asked him to continue in trot until he was able to do a whole circuit. We tried this on both reins, and then I tested to see how he handled me running alongside him. He very nearly got away from me at this point, but don’t tell him that! It was all quite silly, and I decided we probably needed to do more work on him dealing with me doing big, loud, energetic things. So I capered around a bit, flinging myself into ballet-style leaps, exaggerated stretches, and our own Running Man challenge (I won, by the way).

I then realised that our fellow livery had arrived on the yard, and was fetching hay from the shed opposite the arena. Um. I am a serious and competent mule handler, I swear. 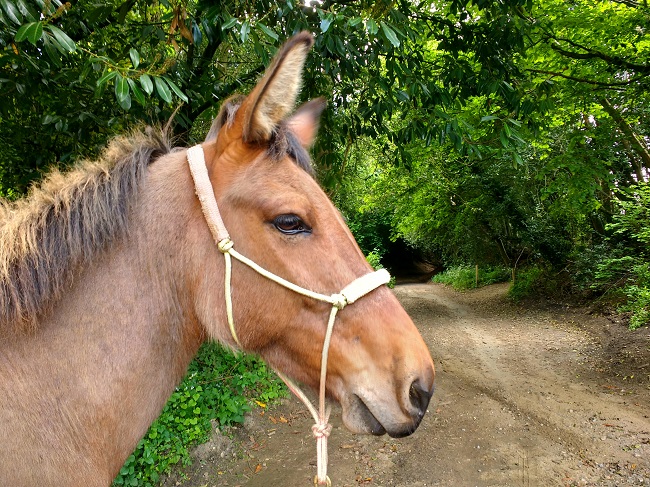 Marty looking very handsome, and wondering if I’m going to take him into the Punchbowl or not.

Today I took Marty out for a short walk up the lane and back. It was all going very well – he was unconcerned by the man drilling on top of a ladder, he didn’t get distracted when we met a horse and rider coming the other way, and he didn’t care about the I-don’t-know-what clanking away behind a hedge above him – but unfortunately, half-way home, a dog started barking at him from behind a hedge. He held it together but then became increasingly rushy and nervy, so we practiced our halts and our back-ups. Back at the yard, we went into the arena and just repeated the groundwork from yesterday. He was beautifully responsive and I hand-grazed him before putting him back in his paddock. 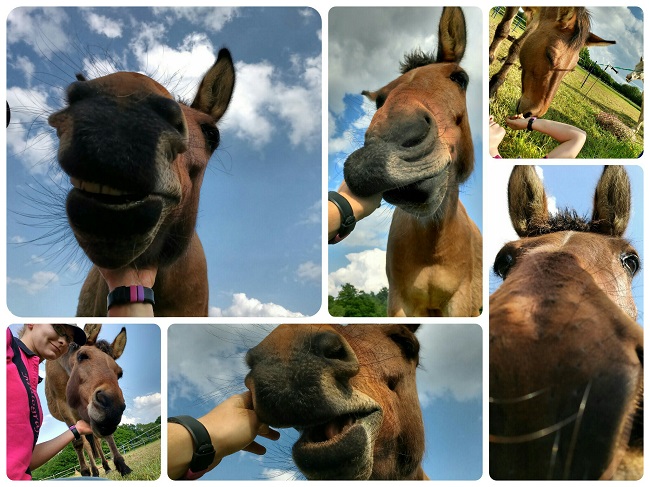 I had no energy for chores this evening, so I wasted time by lying in the grass and confusing my mule instead. I did eventually stop being lazy. But only because I was worried the other livery might catch me being weird again…