When Ben and I got married two years ago, we had leather bracelets made instead of rings. I have Reynaud’s and can’t wear anything constricting on my fingers as they swell up so often. The bracelets seemed like a good alternative and we had them stamped with a line from one of the poems Ben proposed to me with, translated into runes. We tied them onto each other’s wrists on our wedding day and there they’ve stayed ever since.

Of course, being leather, it was inevitable that they would eventually fail. The leather thong binding mine together disintegrated a few weeks back, which obviously called for some hilarious jokes about having to get a divorce and so on. I thought they were funny, anyway.

It was easy enough to replace the broken thong as I had a bunch of leather cords lying around in my craft box, so Ben could have retied it for me at any point … but where was the fun in that? I decided that we should hike out to somewhere cool and replace the bracelet there. I’ve been wanting to walk Marty up to the standing stone on Mynydd Llangyndeyrn for a while, so we decided that the three of us would head over there when we next had the chance. I never did get the handfasting I’d originally wanted, after all!

You may remember Marty’s post-sniffing hobby from when we were in Surrey; he hasn’t been able to indulge for a very long time, so he thoroughly enjoyed taking a good long sniff of this post just after we’d crossed onto the mountain. 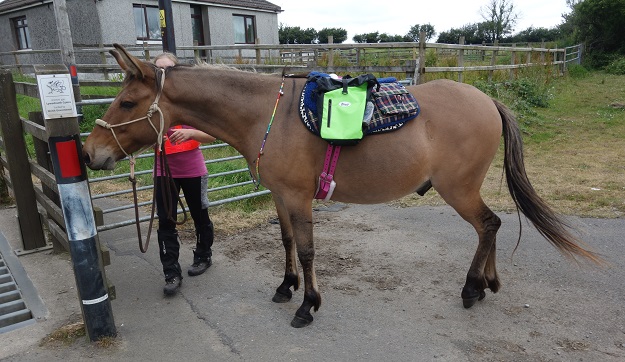 Argh! It’s one of those appalling Unexpectedly Tall Mules again! 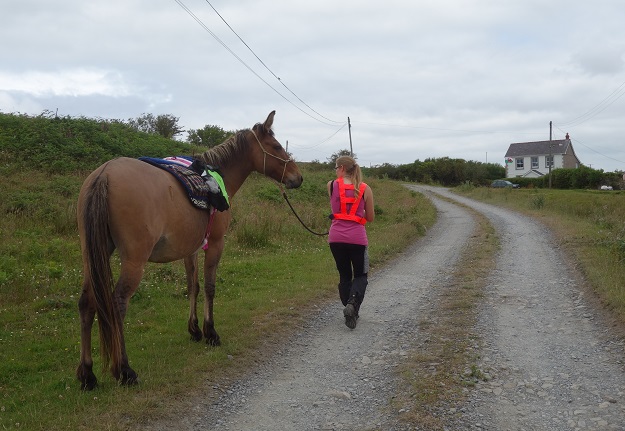 There’s a tiny gutter in the ground here. I’m not even going to dignify it with the word ‘ditch’. Marty never used to care about crossing ditches, we scrambled up and down far more difficult terrain in the Punchbowl – but apparently three months of roadwork has made him soft. He started to follow me but tripped over his feet slightly just as he was about to step into the gutter, and that was it: he flatly refused to cross it. 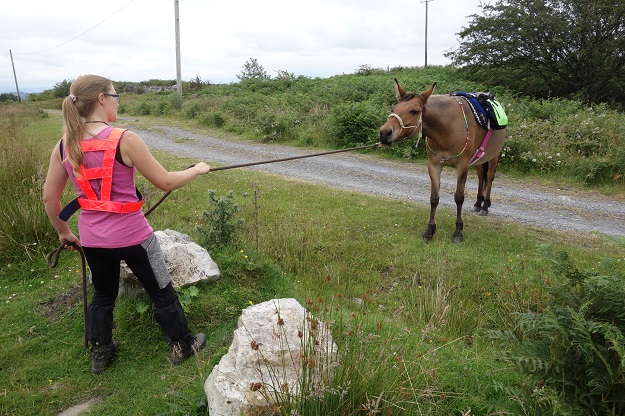 We found a slightly shallower part of the ALREADY EXTREMELY SHALLOW ditch to cross instead. What an embarrassment. 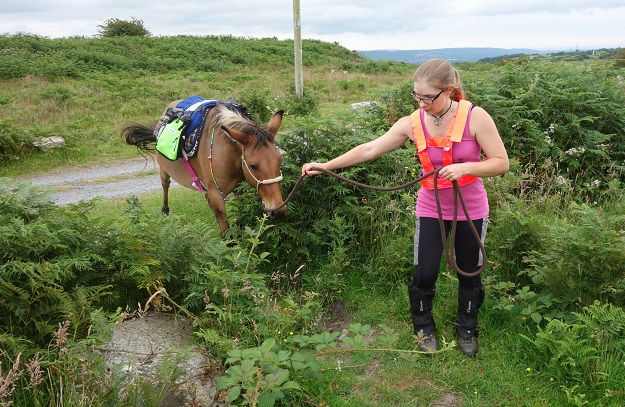 Marty is quite useful for helping you get up hills. I am wearing my angry hill climbing face. 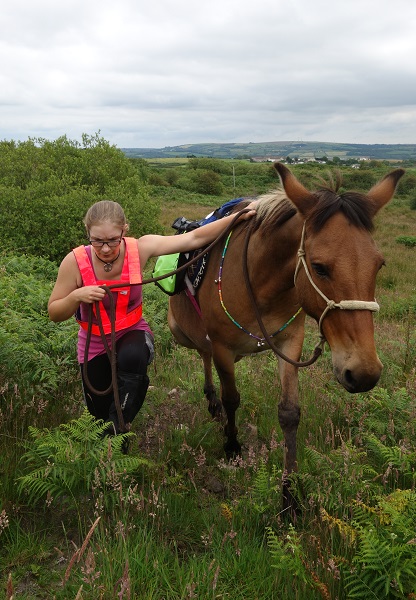 Marty is also very good at posing for pictures. 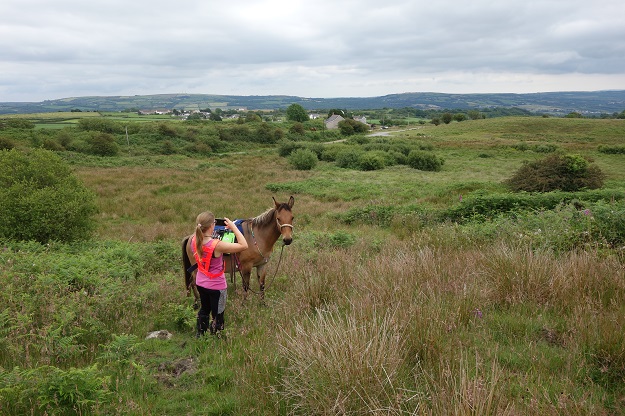 Another Tall Mule! This was in response to him catching sight of the standing stone in the distance, which was Extremely Disturbing to him. It is very, very rare these days that I ever worry about Marty running away when I’m leading him, but there was definitely a moment here when I felt his energy lift and teeter on the edge of a high speed exit. 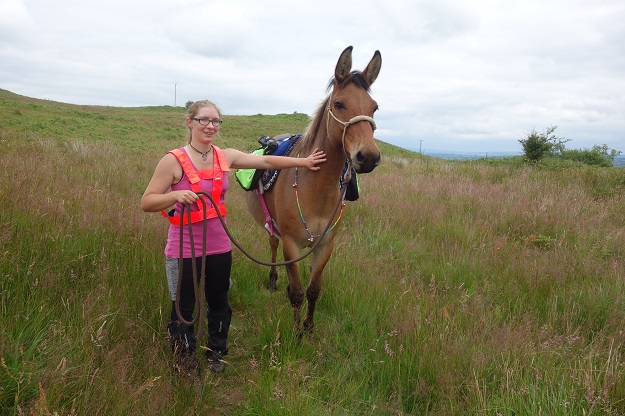 It was less intimidating when we got closer and he was able to figure out what it was. This menhir was erected in the Bronze Age. 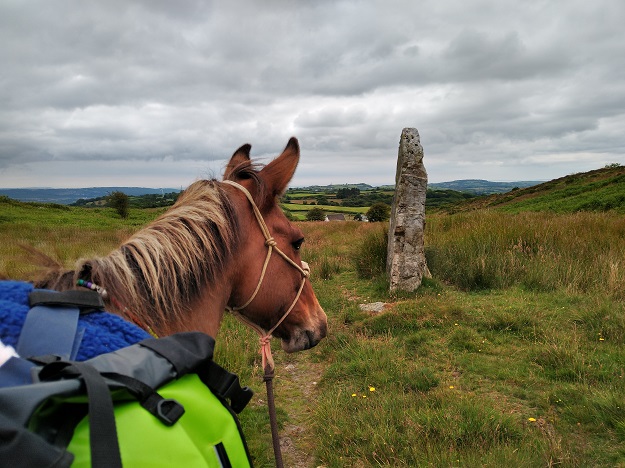 A slightly reluctant pose for a picture with Ben. 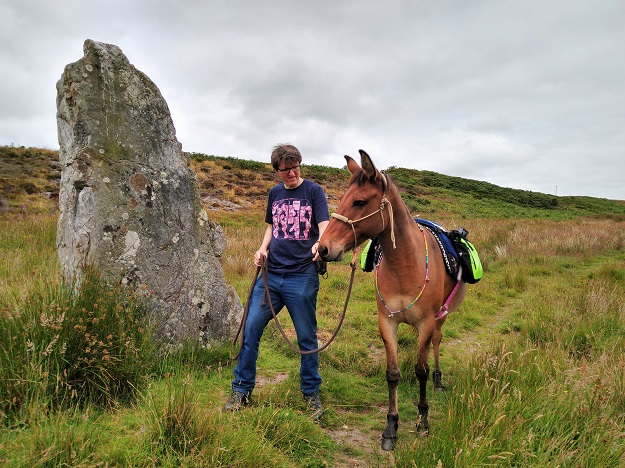 He probably thought he might get a treat out of it, but it was still interesting to see how Marty chose to engage with us – rather than occupying himself by grazing – while Ben was tying my bracelet on. This was also the only time that the sun came out from behind an overcast sky all day; from this, we deduced that the stone must have been raised to honour Lugh, and that having the earthbound representative of Mars Mullo presiding over our ceremony was obviously pleasing to the ancient sun god. 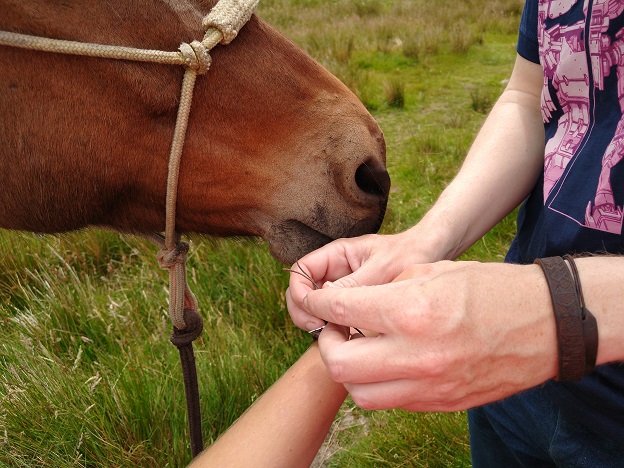 Then … upwards once again! 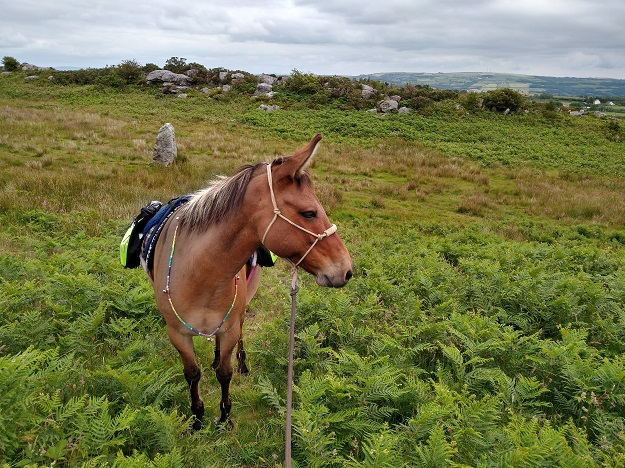 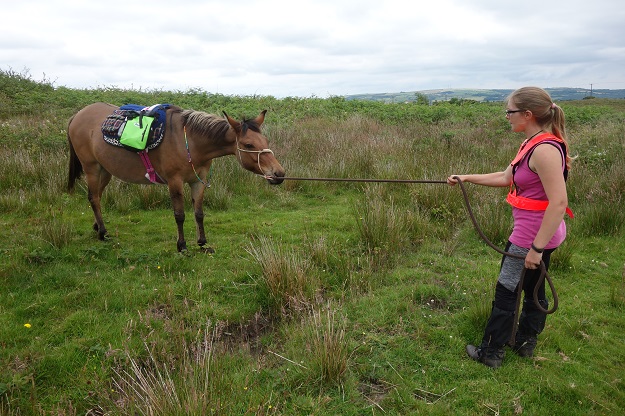 Having gone up and over the other side of the Mynydd Llangyndeyrn ridge, we tried to cross an area of rhôs pasture which would allow us to avoid the road until the last minute. Unfortunately it quickly became very marshy and boggy, and although Ben soldiered gamely on I decided that Marty and I would be southern softies and we made our way back to higher – drier – ground. Marty was an extremely good sport about clambering around in a marsh with me, and tried very hard to avoid stepping on or bumping into me while trying to extract himself from the bog; but I thought I was pushing my luck to keep going. It was much less effort to climb back up and follow the road.

This song – from the one minute fourteen point – is playing in my head right now. Marty and I have delusions of grandeur. We embrace them. 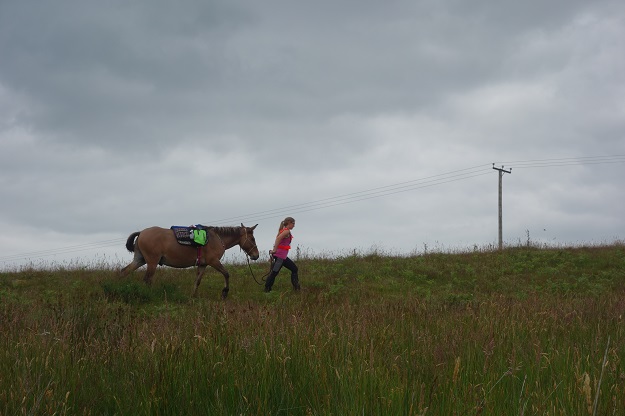 All in all it was a little over seven miles hiked, which isn’t far; unfortunately most of that distance is on a very long, rather boring road with a steady stream of traffic. As the road is also very narrow and with a lot of blind bends, it’s not the nicest of places to walk although almost all the drivers we met were very thoughtful and drove carefully.

Thank you, as always, to Ben: for continuing to be my husband, for hiking all that way with me, and for taking a bunch of photos of me and my damn mule who – as usual – made the day all about him.