I have become very bad at maintaining this blog because, as with most things this year, I am struggling to find the motivation. Several times I’ve started writing then given up in favour of more worthwhile pursuits, such as staring into the dark void of existential ennui while listening to sad songs on my specially curated Spotify playlist relating to a fictional story I’ll never get around to completing.

Anyway, this post is just going to be a collection of photos from a little hike I did with Marty this week, so I can probably manage that. We only covered 6 miles but saw a lot of things that I felt needed to be photographed, so here they are. Come for a walk with us!

Marty stopping to pose for his adoring fans on the way out. The world’s biggest bull used to reside in this field, and Marty loved to stop and stare at him. Sadly he is no longer there. 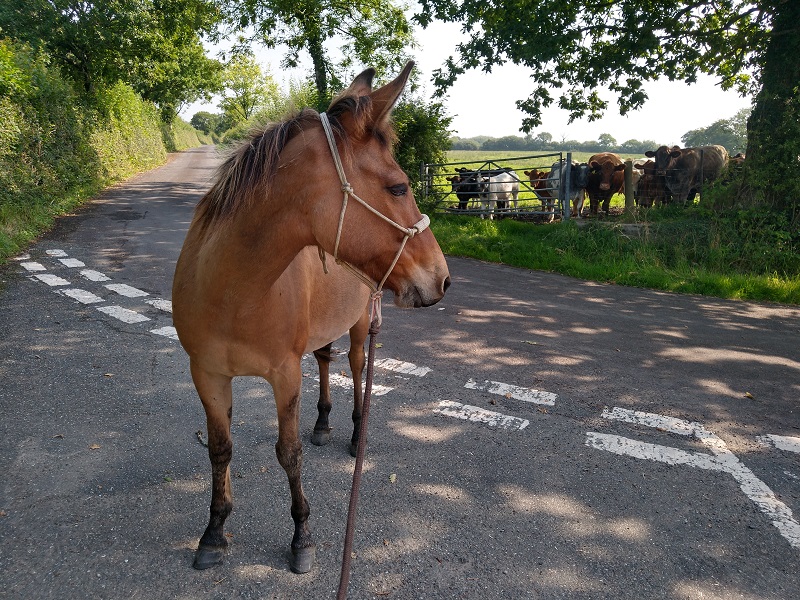 I was trying to take a fake over-the-ears photo, but I got this instead and honestly it’s cuter. 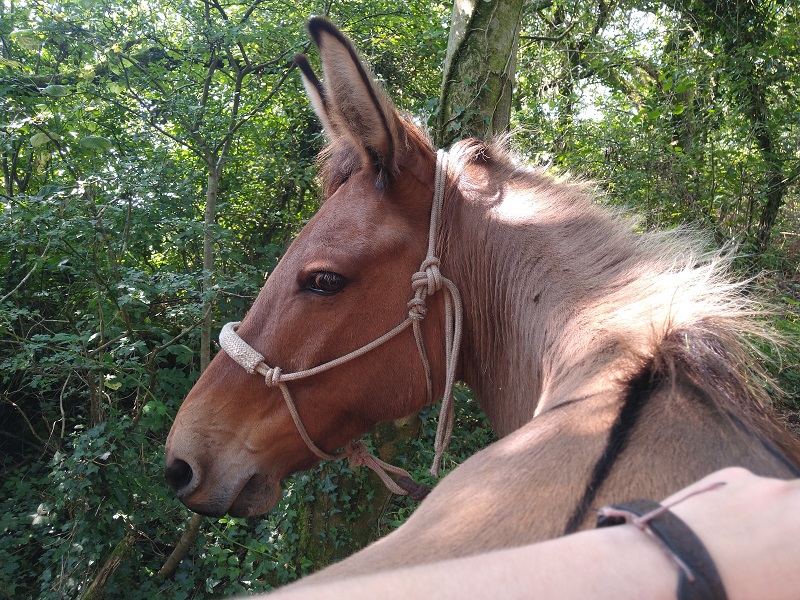 The photo I was aiming for (it’s hard to tell if the ears are in focus when you’re standing on tiptoe, leaning over your mule’s back with your camera hand in the air). 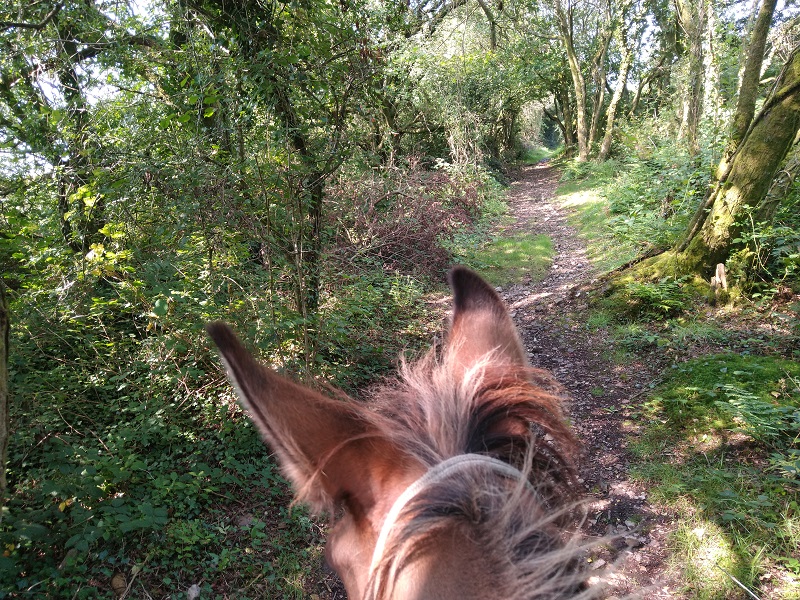 A selfie to show how brackeny (actual botanical term) the path was. It seemed overgrown to me. Ha! Little did I know what was to come. Also, considering the gigantic size of my nose and Marty’s ears, it feels like an achievement to fit them both in one photo. 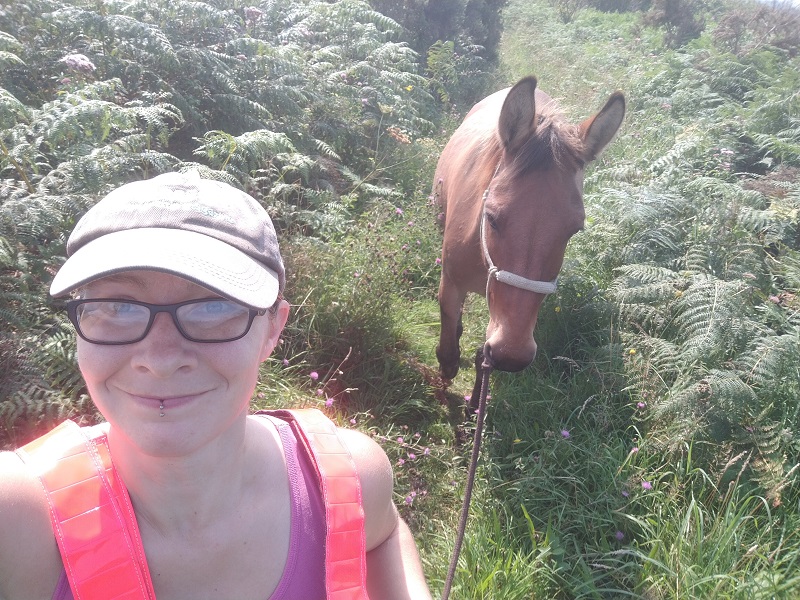 Here was a great moment! Last year, Marty encountered his first goat and was traumatised. For whatever reason he took against them and considered them all to be minions of evil.

The last time there were goats in this field, Marty practically levitated and I had to abandon the picnic I was blissfully enjoying, gather up our gear in one hand, and lead the Marty balloon in the other until we were far enough away that he could come back down to earth.

He seemed better equipped to handle them this time, so we stopped and I let him check them out. 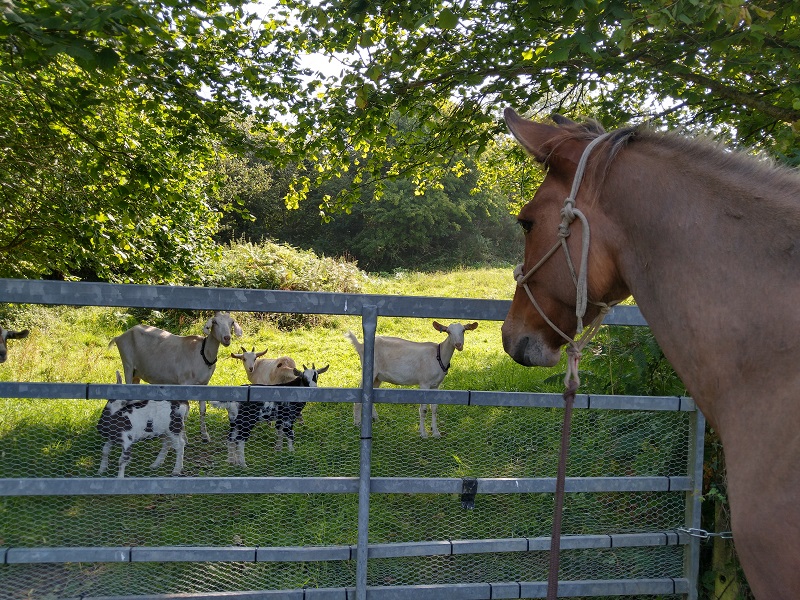 Still, I was gobsmacked when he approached the gate through his own choice and lowered his head to touch noses with his one time nemeses. After gently and politely inquiring after their good health, he began grazing right next to them as though his capraphobic days were a thing of the past.

A couple of weeks previously we’d encountered a friend’s two large goats out on the lane and had endeavoured to round them up for her, not realising she was present and the goats had just snuck out for a brief roadside snack. They ran back home – away from us – when they saw Marty and I approaching, which I think really helped his confidence. 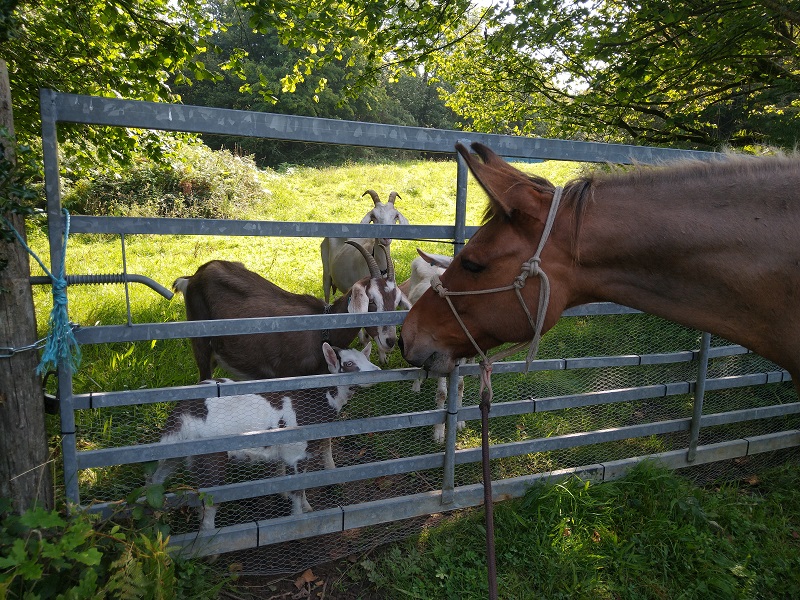 Then we located: donkeys! Sweet best friend donkeys, enjoying the shade together! 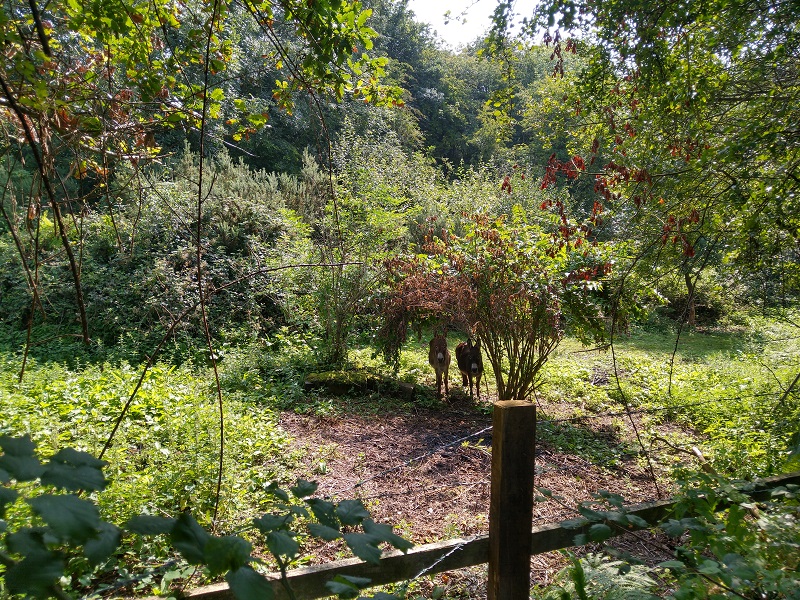 Another donkey and his friend came over to peek at Marty, who was mildly interested. 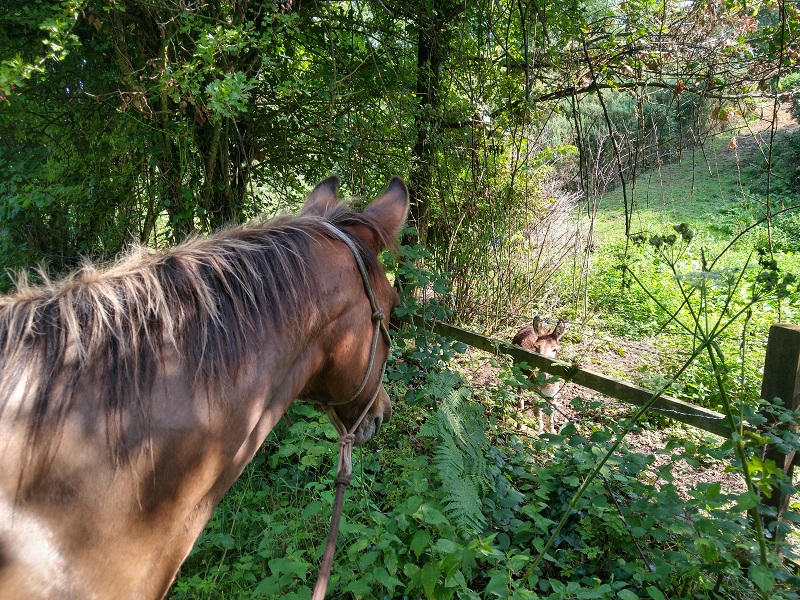 Then we met a pony – in the same field as the donkeys, but completely by itself in the furthest corner of the field. 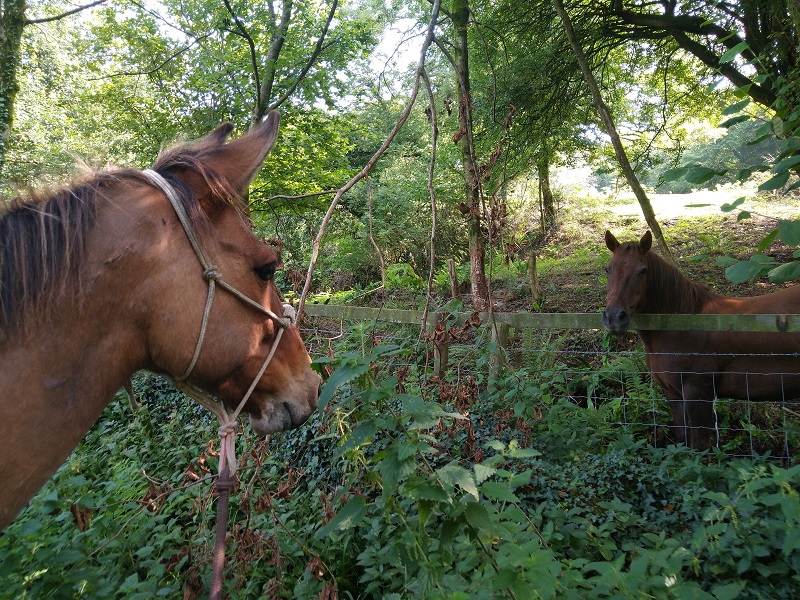 A photo of the byway we were on, just because. A very pleasant place to walk in the heat. 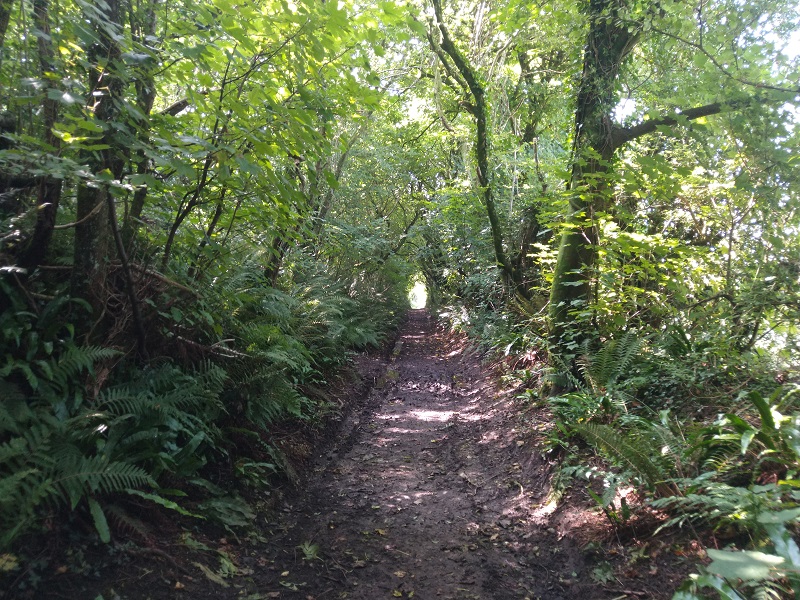 When we came down here last year, it was completely blocked – the gate was present, but on its side and sewn into the sagging wire of the fence. A nice new fence has been put in and the gate is once again functioning as a gateway, but unfortunately we still couldn’t pass as there were at least three ponies in the field on the other side. Tame horses (as opposed to the semi-feral ones we used to encounter in the Punchbowl) are the absolute worst livestock to pass through. It wasn’t worth the risk, so we backtracked. 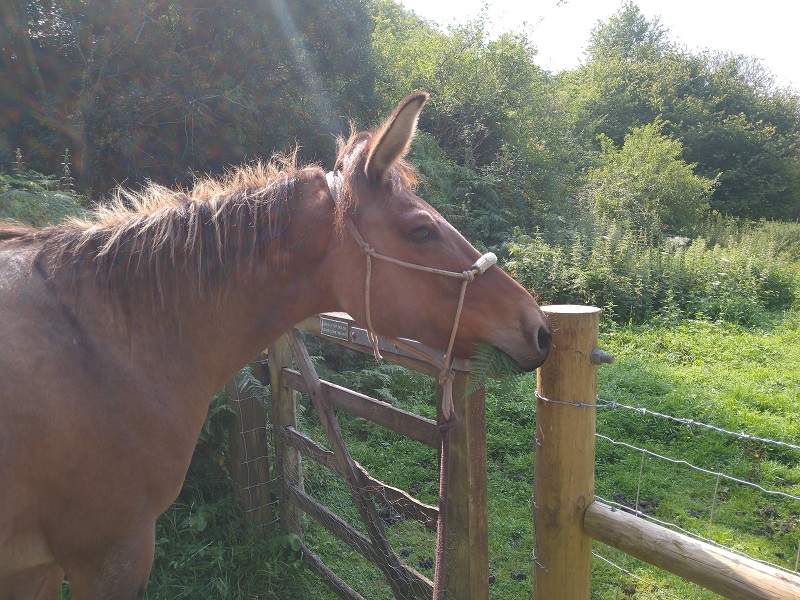 Another gormless selfie from me, but the background is good and I like how Marty is striding out. 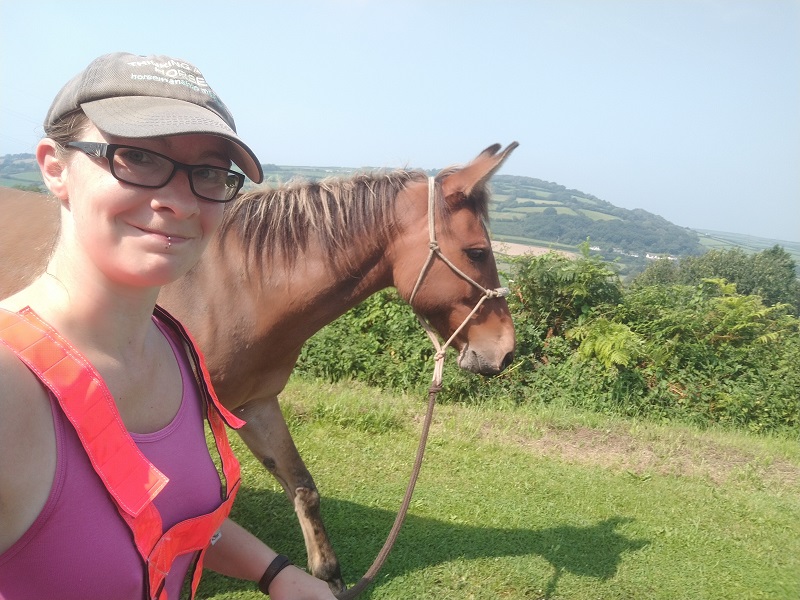 Back on the mountain and we followed a path we’ve never been down before – there have been a few revealed since the fire in April. It led to an absolutely fantastic viewpoint on a cliff edge! 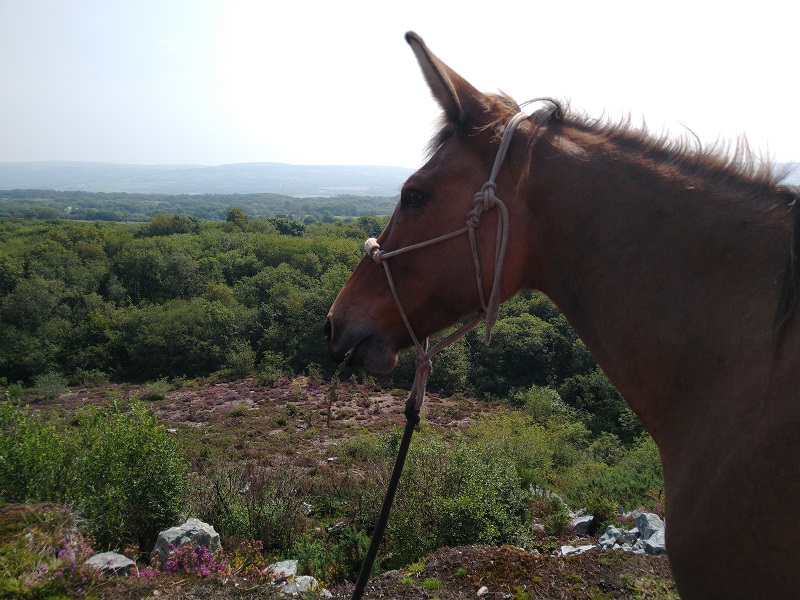 Marty was not so keen on posing unfortunately. 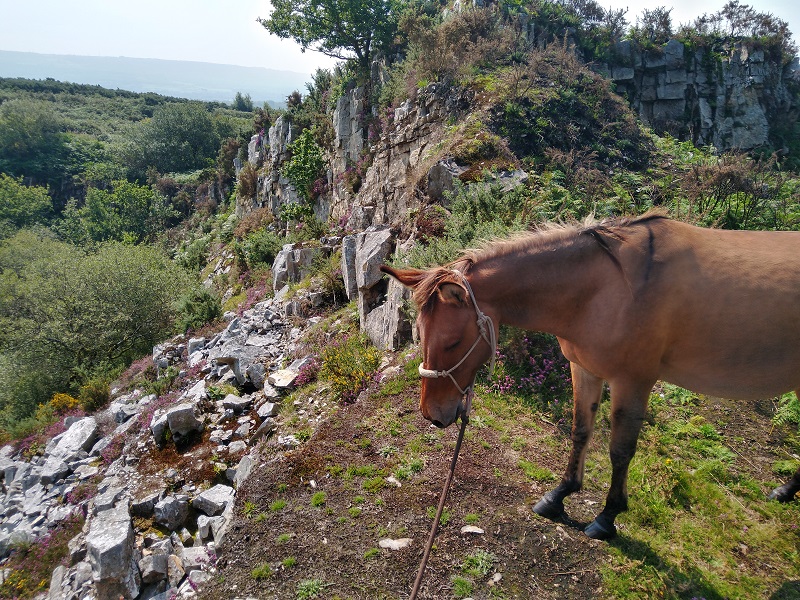 Although he had no qualms in squeezing between the cliff edge and the tump I was standing on in order to eat heather. 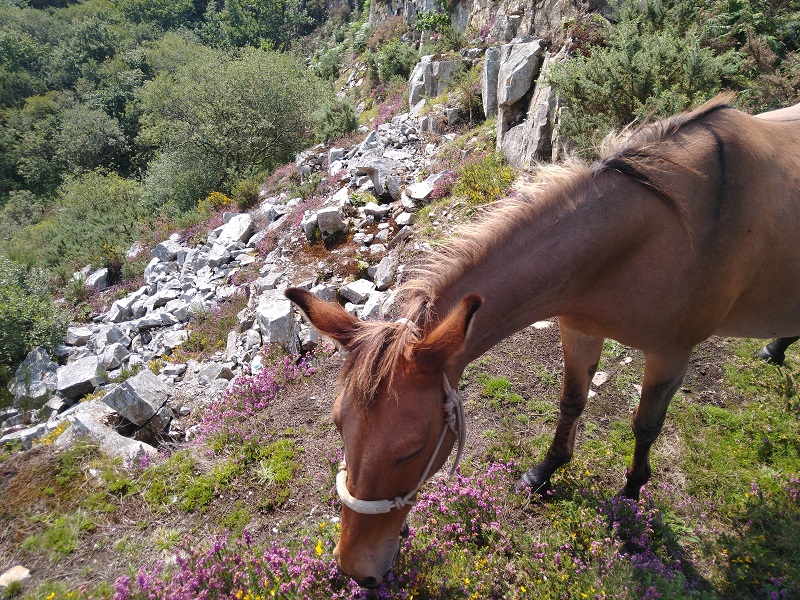 A small potato follows me faithfully up yet another barely-there path. 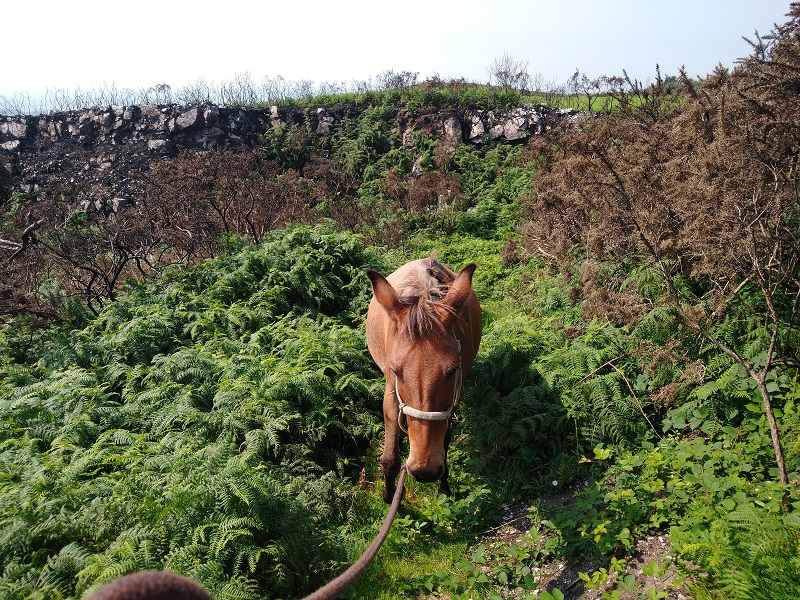 Alright, NOW we’re on something that qualifies as an overgrown path. Very brackeny. An excess of bracken. Selfie because if I stopped moving in order to turn around and take a photo, the risk of Marty putting his head down to eat and never resurfacing was too great. 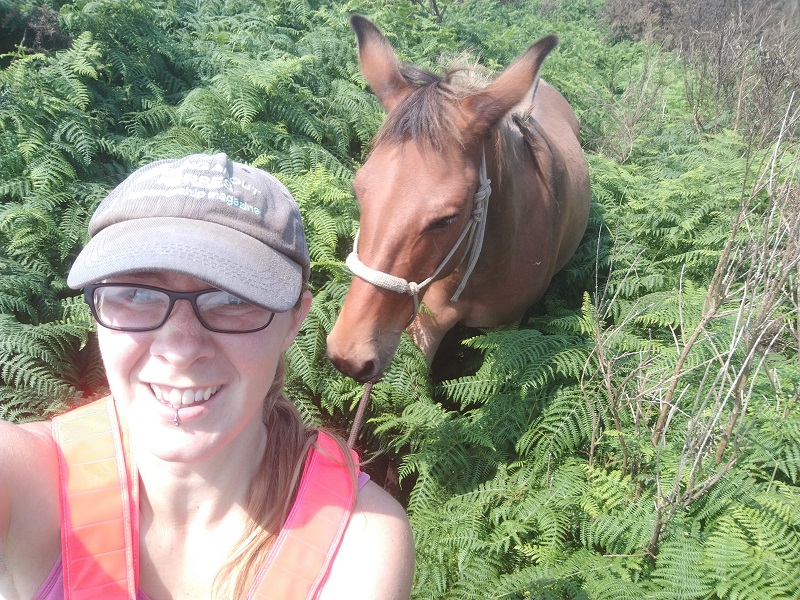 And we’ve ascended! Starting our descent and homeward journey now. 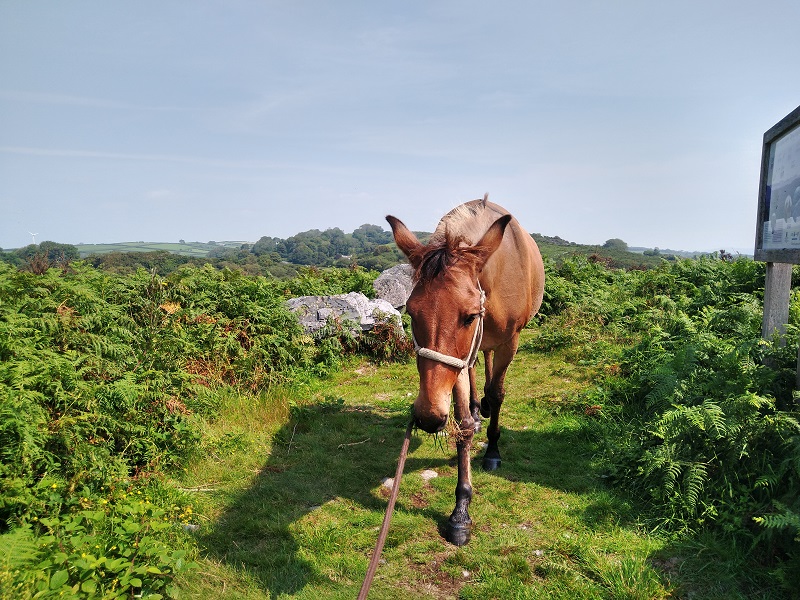 Our last animal encounter did not get a photo because it was quite a scary one. As Marty and I exited the narrow droveway at the end of our lane, we were met with the alarming sight of our neighbour’s open gate and their very large guard dog lying in the open boot of their car. He’s a big mastiff and spends a lot of time barking and throwing himself at the fence and (usually) closed gate whenever we pass, and I’ve often wondered what would happen if there wasn’t a barrier between us.

As expected, he came running out at us and I responded the way I usually do with loose dogs – stepping forward to place myself between Marty and the dog, and slapping the ground hard with the end of my leadrope. This a technique I had to adopt because Marty was so afraid of dogs that I had to take the initiative and ‘defend’ him, in order to prevent him from leaving the scene.

Unfortunately, although this works with your regular yappy dogs who just want to bark at you, I learned that it’s not so good with a dog whose whole job is about guarding his property. I was greeted with a very frightening amount of teeth and at that point, fortunately, my neighbours came running and the dog was called away.

They were very apologetic but we were all fine, and no one was hurt. I was exceptionally pleased with Marty who’d just casually stood behind me throughout and, once the threat was gone, took the opportunity to start grazing. Dogs barely concern him these days but it’s always nice to be reminded of how far he’s come – although maybe in a less scary way next time!