Two weeks ago I was finally able to announce, publicly, that Marty had been asked to be the first ever ambassador for Mule Welfare UK! Honestly this should have been the topic of last week’s blog post, but I forgot I hadn’t already written about it here because that’s the kind of person I am.

Launched on National Mule Day in 2018, MWUK’s aims align very closely with my own: to inspire, support, and encourage mule owners, and to spread the word about how versatile and rewarding the mule can be … given a little time, patience, and humility! They are a young charity but have already done a lot of good work in supporting mule owners in the UK.

Marty and I cover a lot of miles and meet many different people, all of whom have been thrilled to meet a mule up close – for many, it’s the first time they’ve ever seen one. From his beginnings as an unpredictable, uncatchable, downright annoying little rogue, Marty now wears the ambassador title with gravitas and leaves a good impression on all he meets. I am very, very proud of him.

For our official announcement photos, Marty, Ben and I hiked up to a place called Mynydd Llangyndeyrn which is a Bronze Age site with a big hill for good backdrops. It’s quite a distance and there are Very Annoying Ponies (more on that later), so we don’t go there that often. Here is a very picture-heavy account of that trip! 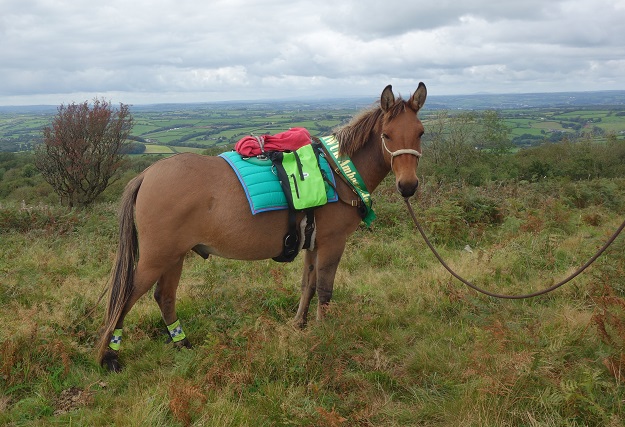 Oops – hit a slick patch! I absolutely cursed myself for this, as it’s the kind of thing that can really bugger up your mule’s willingness to listen to your decisions. The last time we were here he slipped while I was asking him to cross a very shallow ditch and immediately decided that he was never going to cross another ditch again, so when this happened I thought we were stuck up there forever. Fortunately, Marty was apparently in a more forgiving mood this time. I guess you have to be when you’re an ambassador.

And then, we entered … The Ordeal. There’s stock grazing on this mountain and we’d passed the cows on our way up; they hadn’t cared about us and Marty hadn’t cared about them. On the way back, however, we found another small group and with them were two ponies.

Unlike the Exmoor ponies in the Punchbowl, whose attentions were always easily dissuaded by a bit of energy and intent, these ponies are not semi-feral and presumably belong to one of the farms nearby that has grazing rights. This means they are very curious and very, very persistent.

I placed myself between them and Marty and advanced, stepping forward and using the tail of my rope to back up my energy projection as they came towards us. Unfortunately, their interest piqued the cows interest, and one particularly rambunctious heifer came bounding over with them. We were literally beset on all sides and even with Ben on foot to help us, the ponies still managed to dive round and pop up in irritating places, coming back in for another go whenever they were driven off.

I was very stressed during this encounter because I was frightened that they’d get close and kick Marty on his offside. I didn’t want him to get hurt and I definitely didn’t want me to get hurt if he tried to run away from them! Luckily, the cow left us alone quite quickly – she was more easily affected by Ben and I getting ‘big’ and shooing her. The ponies had clearly never been told to get out of anyone’s space in their lives and they followed us for the half mile or so back to the gate, even racing across the road after us.

Much later I remembered that I had my plastic litter picking bags in Marty’s packs, and if I’d thought about it at the time I could have used them to really back up my GTFO vibes.

Marty was truly exemplary. There were so many reasons for him to ‘misbehave’, and no one would have blamed him if he had: strange ponies rushing at him on all sides and/or running past, me getting more and more stressed out next to him, Ben and I both sending out a lot of energy, cars passing … but he maintained a steady pace throughout, and never took the slack out of the ‘smile’ in his leadrope.

Still, I was very glad we had Ben with us!

Sometimes, an ambassador has to get tough!

While we were walking home we passed a farmer who we’d met on this road before, and who was as pleased to see Marty now as he had been then. We went up the drive to his house so that his wife could meet Marty, and so that Marty could meet their horses (he told them where to go, too). It’s a small world: it turned out that not only was the farmer the guy who our local feed store had suggested we contact for muck heap removal, but he’d actually known the previous-previous owner of our farm and had spent a lot of time there as a boy. We had a lovely long chat, Marty behaved very well, and everyone was very impressed with him. We picked up litter on our way home.

The other, better side of being an ambassador!