One of the benefits of Marty being in a separate pen is that I’m actually working him more. This is partly me attempting to assuage my guilt about leaving him in there in the first place; I figure that the least I can do is get him out every day, just so he has the chance to do something other than look at the four corners of his paddock.

But it’s also because it makes things so much easier. It gives me time that I didn’t have before. Instead of checking my watch and thinking: “I have an hour and a half – do I risk trying to do something with Marty? Will this turn out to be 50 minutes spent trying to catch him, by the end of which I’ll be tired, sad and frustrated – and he’ll be much the same?”, I can just mosey in and see where he’s at. If I can’t catch him, then it’s no huge concern; he doesn’t benefit from it, like he would if he was in the large pasture with his buddies. He just … stays in the pen. I no longer have to plan my time according to how long I might have to spend on catching him. 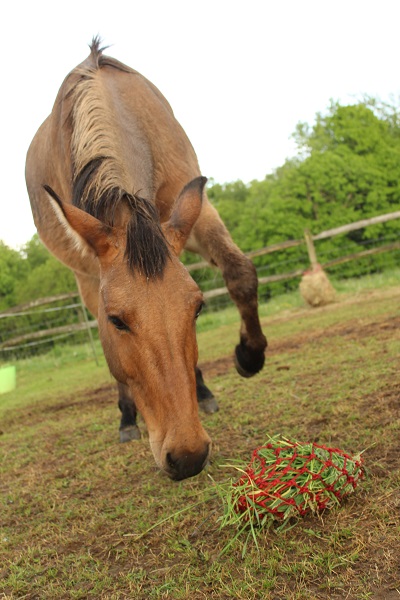 Another thing I’ve been doing is providing him with ‘grass balls’ which are part entertainment, part apology for not allowing him to graze with the horses.

Of course, I know this isn’t a very good long term solution. My ultimate goal is to be able to catch him whenever, wherever. Going forward, I think I might introduce Marty to the concept of going into a pen during the day and then back out with the herd at night; I feel like this would be a good compromise, and would also set up a nice routine which I think Marty would take comfort from.

Despite his earlier grumpiness on Monday, he was feeling pretty mellow by the evening. I caught him, groomed him, and played around a little – introducing him to his bridle by letting him touch it, and then using it to rub on his neck and back – before we had to vacate the arena so Ben could loose school Cash. I hand-grazed him beneath the trees while the heavens opened, and later introduced him to the idea of standing in a stable during rainfall. The noise on the roof was scary to him, but he did well. He was brilliant to be unhaltered, the best he’d been since the previous Monday! 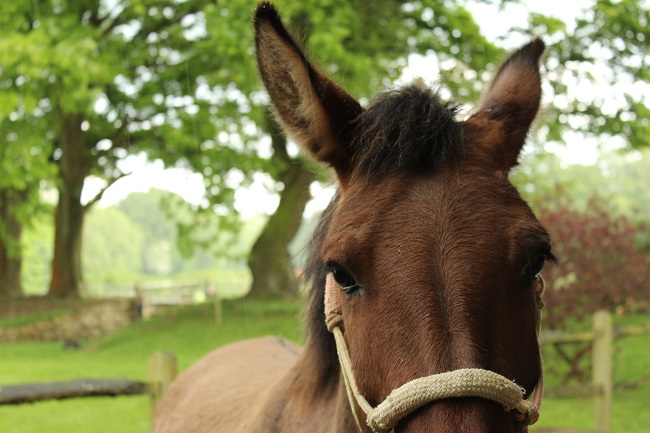 Waiting to see if the rain would pass. It didn’t.

On Tuesday I felt he was tuned in enough to be able to go out for a walk. He hasn’t actually been out since the end of March! He was a little sticky to start with, but I practiced the breathing exercises that Jeff Sanders taught us at his last UK clinic so that I wouldn’t accidentally exacerbate the situation with my own nerves. I had originally planned just to take him to the end of the tree tunnel and back. Then I thought we could maybe make it down the hill. Then I thought we could go as far as the back of the churchyard. And then, before I knew it, Marty and I were on the common.

This is a big deal for us: we haven’t been anywhere other than up and down the lane since the Dog Incident, which was over a year ago. We used to love exploring the common and the Punchbowl, and although I’ve been able to get Marty to a point where he can tolerate leashed dogs, I was too afraid of what would happen if we met a loose one – which is more likely on those aforementioned places. My fear fed his fear and so on! Anyway, we only took the shortest route possible – down a track onto the common, sharp left, then a diagonal track back to the village (so that we were effectively walking in a triangle) – but it felt so good to be back out there. And Marty really enjoyed it. 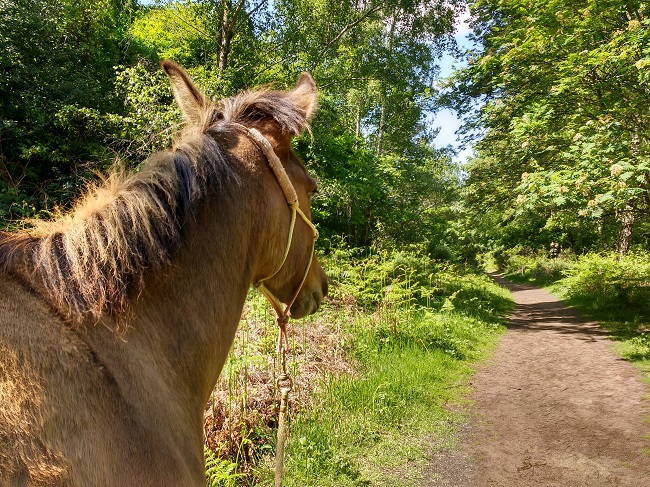 We even stopped for a photo opp! 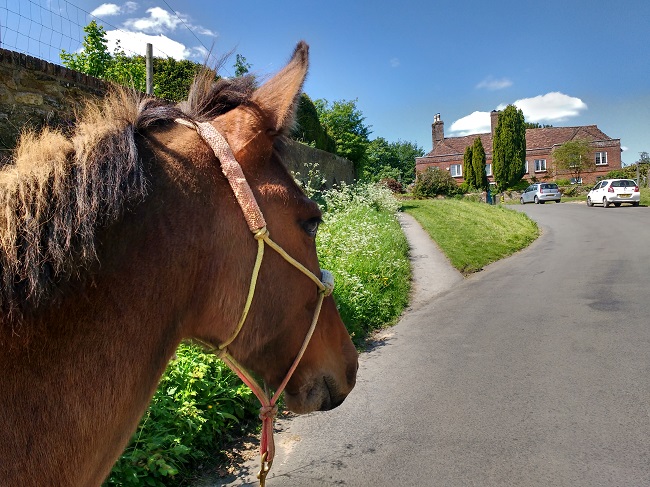 Heading up the hill.

We had one minor discussion on our way back through the village, about whether or not Marty could walk past a puddle without barging into me; he could, as it turned out. He’s not usually bothered by puddles but he’d just been terrorised by a sneaky sign and I think the sun was shining on the puddle in a way that made it dangerous.

I was quite surprised when he crashed into me as he’s usually extremely careful not to do so, and that was why I chose to correct him. On the one hand, it filled his ‘cup’ and made his energy quite high for the remainder of the walk (though we continuously practiced our halts and he was exceptional, only once putting weight on the rope), but on the other I wasn’t keen on letting something like that go unquestioned. I didn’t force him to walk through the puddle, I just wanted him to walk past without trying to exit through me. I am not a very good exit.

Once home, he had a brief moment where he thought he might have to react to the halter being touched; but then he changed his mind, and I was able to smoothly unhalter him without the usual rigmarole.