Marty had a visit from Gavin Scofield, a cranial osteopath, on Tuesday morning. I’d seen Gavin work before on a friend’s horse, and thought that he would be ideal for my twitchy mule as his manner of working is very low energy. In fact, it looks to the untrained eye as though he’s doing nothing at all – until you see the equine start to respond. With Marty, Gavin felt that he was carrying a lot of tension in his withers which in turn was effecting his poll. He laid his hand on Marty’s back and within seconds muscles started to twitch right up in Marty’s neck. He shuffled around, pawed a bit, then realised he was being helped and relaxed into it. He even stretched his head forward a couple of times in order to rest his chin on my shoulder, and huff sweetly into my ear.

Gavin agrees with me that Marty is not experiencing pain, but rather the memory of it. He has a lot of tightness in his neck, caused by being slightly off balance behind and needing to compensate with the rest of his body, and whenever he raises his head he increases this tight feeling which is obviously uncomfortable for him. I’ve said before that a lot of problems I’ve encountered with Marty have been self-perpetuating, but the way Gavin works is to teach the equine to carry themselves properly so hopefully this will help him. 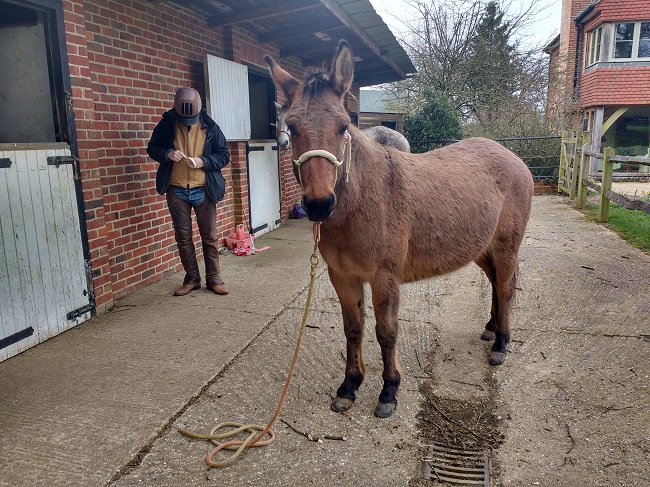 As an interesting aside: Celina, our McTimoney practitioner, picked up on Marty’s dropped pelvis which she suggested might have caused a knock-on effect through his back and up towards his rotated atlas joint. Gavin also picked up on the pelvic issues and the effect on his poll, and said that he thought Marty had been carrying this around for several years – he suspected that a young Marty may have fallen and wrenched himself in the field. A year ago we had Stacey Bevan out, and at the time she said she had an image of a very young Marty getting stuck in a ditch or hole and being unable to get his legs underneath him. Strange but true! It was interesting that three different people picked up on the issue in three different ways.

Marty then had three days off. On Saturday he allowed me to catch him, but when I began to adjust the halter he reared and did his salmon-on-a-line impersonation. He then threw in a deliberate twist and tried very hard to rip the rope from my hands, but I was able to hold him, turn his nose, and direct his energy out onto a circle instead. 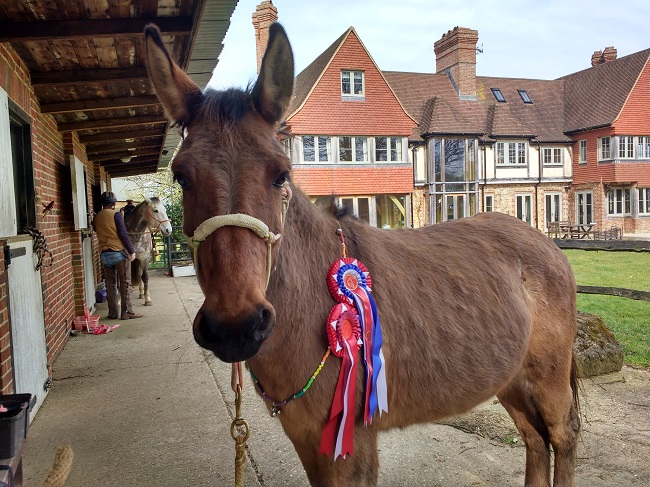 (he won these in an online photo show back in January, by the way. I just didn’t get round to photographing him with his prizes)

After a few minutes of circle work in walk and trot, I was eventually able to engage his brain and at that point he settled and allowed me to adjust the halter without silliness. We went on to have a perfectly lovely arena session in which we practiced our mounting prep and our side-by-side back-ups.

Upon returning to the field he got a little explosive once again, but this time – when it became clear that I was just going to keep calmly asking for him to lower his head – he settled very quickly and I was able to remove his halter. He continued to hang out with me afterwards, even putting his head in my arms and letting me cuddle it, so I don’t think he was particularly traumatised.

Practicing his telekinesis (there was a horse being ridden by on the road. He was sure if he stared hard enough he’d be able to melt a hole in the hedge). 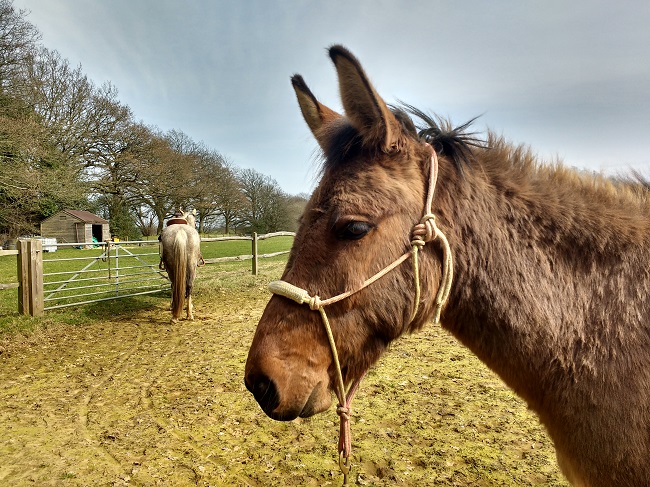 Haltering was a complete non-event on Sunday. He was 100% both ways. I genuinely believe that his behaviour the day before had been another of his Big Tests – he was neither afraid nor in pain, but merely experimenting. There is no malice in my mule, just an insatiable number of “What if…?”‘s. Had I let go of him I think we would be looking at a lot of work to fix it, but by remaining calm and taking charge of his outburst I was able to politely but firmly close that door to him. It is very rare for him to try and break free like that, and I would like to keep it that way!

It’s real hard to get your friend in a selfie when they have such big ears. 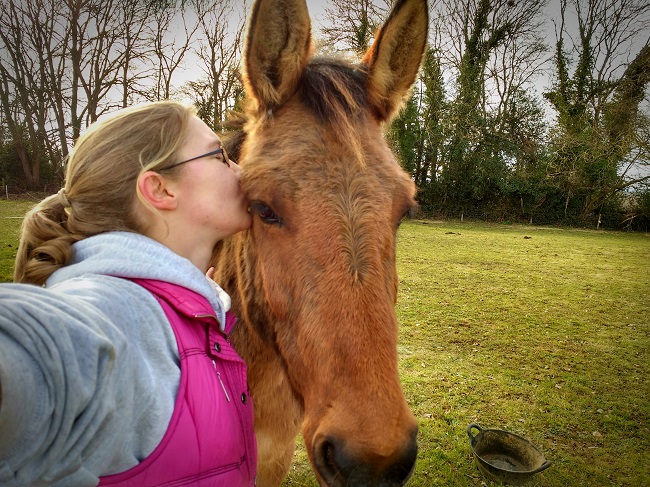