Marty has really got on my nerves the last couple of days. I know we’re not supposed to say that – that it’s always supposed to be rainbows and sage life lessons – but by Odin’s Beard that boy is SUCH an obnoxious ass sometimes.

He’s been so annoying that I’ve been considering advertising him again in case some strange, talented person, with time on their hands and a vaugely masochistic need for a Sisyphean challenge, might just be mad enough to take him on.

He’s been so annoying that I’ve considered dropping him off at a local sanctuary in the dead of night, a note tied to his mane that reads “I’m sorry, this is what I get for messing around with that ouija board when I was younger, just don’t make eye contact with him and DON’T GET HIM WET.”

He’s been so annoying that I’ve weighed up the costs of what I’ve spent on him in the past three years against the cost of what I’ll spend on him in the next three years, and wondered whether it would make better economical sense to buy him a one way plane ticket to America and put him in my friend’s pack string.

He’s been so annoying that I’ve considered turning him loose on the National Trust land, moving country, and practicing my surprised face for when news reports reach me of the Beast Of Surrey who’s been seen thundering through the mists, his head upside down and his tail whirring like a gyrocopter, hiccoughing like a zebra as he goes.

Unfortunately I have done none of these things. My penance for having failed to make anything of him is that I am now stuck with him – unless, of course, YOU are that rare person searching for a small, hairy potato with no redeeming features and the singular ability to make everything ten times harder than it needs to be. If that is you then I suggest you sit down in a dark room and just think about it first. There’s a chance you might need professional help. 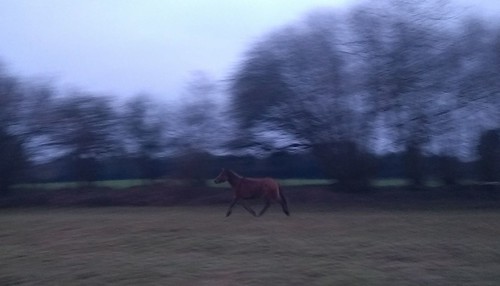