The herd moved fields again yesterday, and as Ben is away this weekend – and all our fencing was already in use – that meant I had to play musical equines. I caught Iris first and put her in a stable before doing the same with Marty. I had intended to bring them in together, but I wasn’t sure if I’d be able to get them out the field without Cash following! Marty has been a bit silly lately and unfortunately I can’t currently trust him to be as responsive as I’d like in tricky situations. Then I got Cash, put him in Marty’s pen, and began taking down the outer fencing. With tape and posts in the wheelbarrow, I then brought ‘barrow and Cash in together, dropping Cash off at the yard on my way past. Our third stable isn’t usable so I just tied him up outside.

I set up a boundary fence between our section of the paddock and the other livery’s, then went back to the old field to take down Marty’s pen and the remaining outer fence from the horses’ paddock. I trundled back with the wheelbarrow, set up Marty’s new pen, and put in a movable fence so that I could strip graze the horses’ section. Then it was time to fetch the herd!

All in all it took me about an hour and a half from start to finish, and I was very grateful that I’ve taken the time over the last couple years to introduce Marty to stables. All three of them waited patiently, and it was nice not having to worry about whether Marty would try and jump out. Having to stand around and do nothing for a while was good for him, too.

Because this field hasn’t been fertilised, I began to wonder if I could turn Marty out with the horses again. Having him in a pen is definitely easier when it comes to catching, but I don’t like to keep him separated and unable to play or groom or do other, normal things. When he comes back from training I’d intended to start putting him out with the herd at night, and then putting him in a pen during the day anyway.

When I got to the yard this evening there was work being done and we couldn’t get to the arena, but he was so good about being haltered (he didn’t react at all when I moved the crownpiece or altered the knot, which are usually his triggers; he was too busy watching the other livery being fed, which suggests to me that he’s not as afraid as he might claim) and unhaltered, that I thought I’d reward him by letting him out to play with the horses for a bit.

Despite having not been in with the horses for a whole week, he wasn’t remotely interested in them at first. 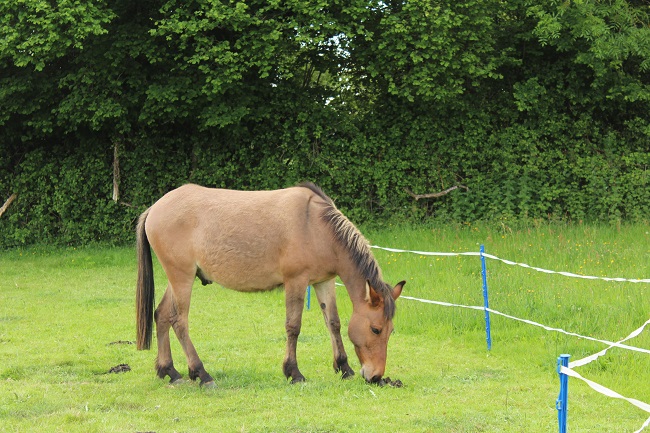 He had more important things to do, like poo to smell… 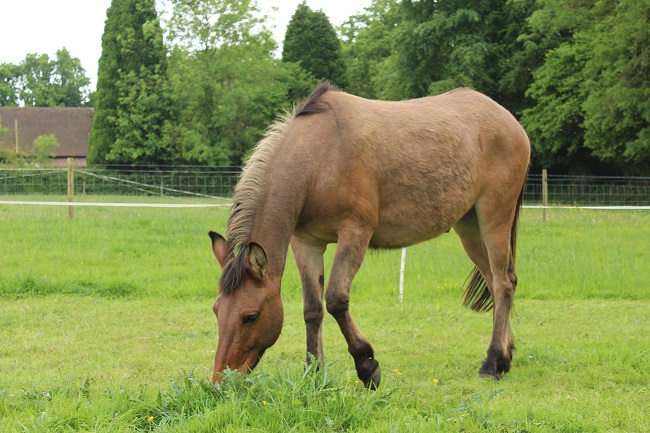 …and thistles to eat.

It wasn’t until 5 minutes had passed that Marty finally deigned to acknowledge his fieldmates’ presence. 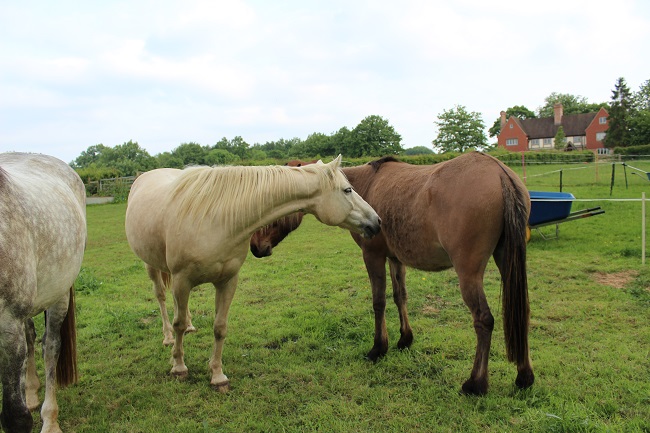 And then things got kind of heated. 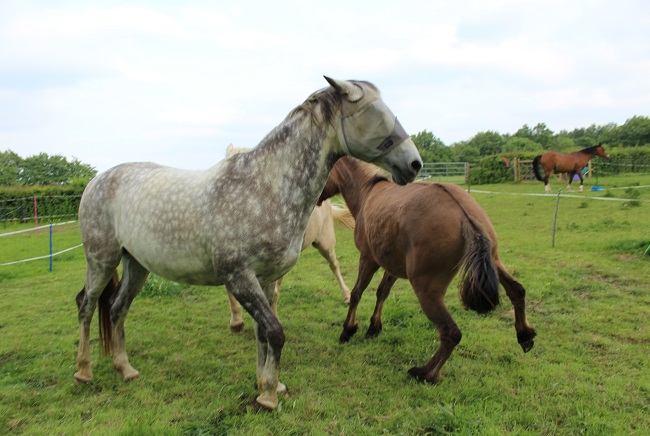 I initially thought it was the horses who had started it. Someone had squealed and I assumed it was Iris – there I go, gender stereotyping! Everyone started running around and I thought that poor Marty was being hounded by his peers. Then I began to realise that the horses were just as bewildered as I was, and when Marty propped and screamed at Cash it became obvious that he was the firebrand after all. 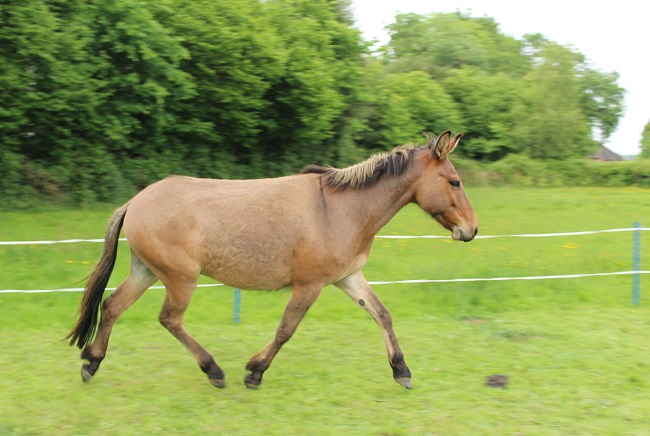 Marty wasn’t in a great hurry. 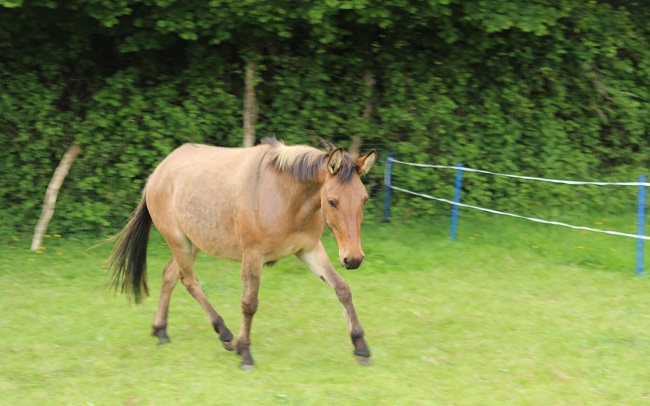 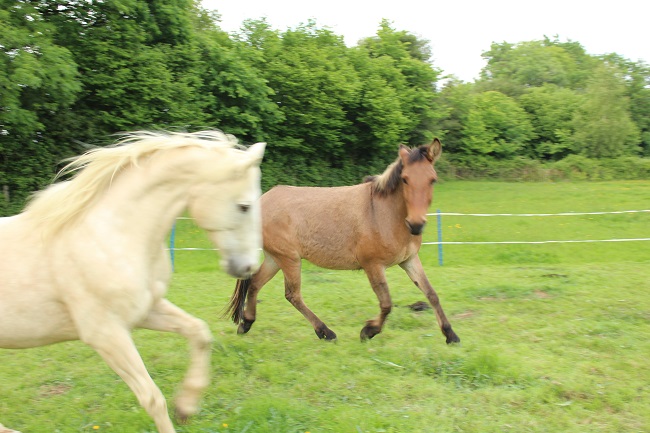 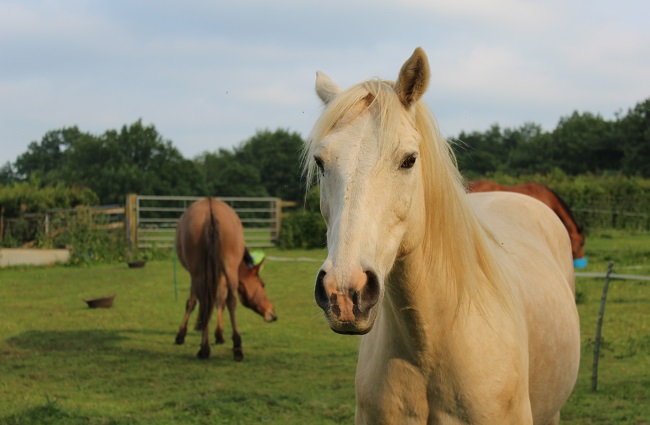 Cash is confused. Me too, buddy, me too. 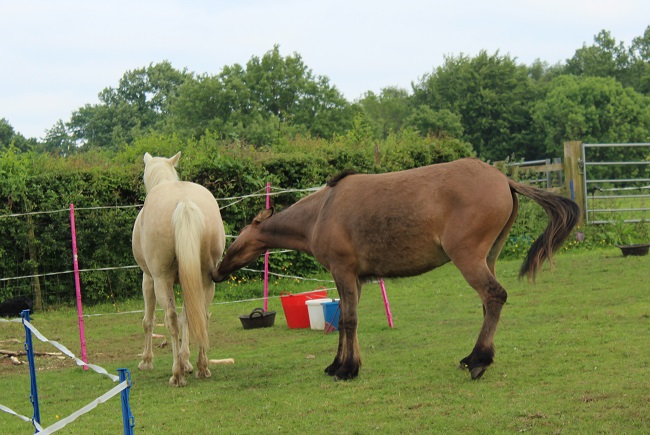 This was totally unprovoked – Cash was literally standing there, minding his own business, and mule had to be a jerk to him. 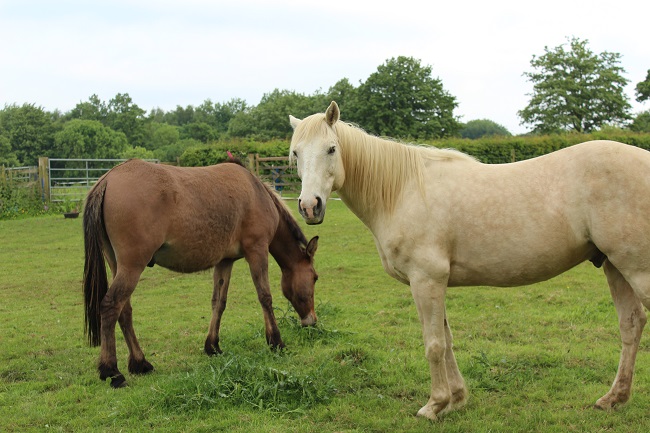 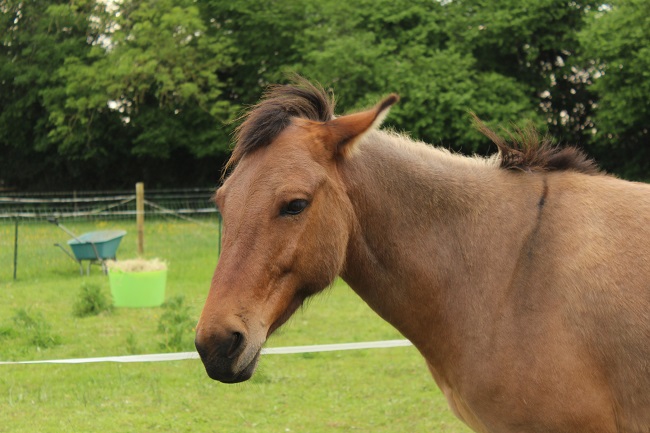 And then drama happened. Just as they seemed to be settling down, Cash picked up Iris’ fly mask which I’d left on the floor. This frightened him, so he bolted; but as he failed to let go of the fly mask, it came with him and thus began his ordeal.

Now, Cash has done this before. He once picked up Ben’s jumper, which had been left over the gate, and then galloped around with it in terror until it occurred to him to let go. He found brief fame by being featured on the Cheezburger homepage when a photo I’d taken of him, galloping across a snowy field and trying to jump over the glove he carried in his mouth, became popular. We’re not just being horrible when we say we think he’s mentally subnormal. He does not make the best decisions.

However, despite all that, I still expected him to have learnt from past experiences and to figure the solution out. He didn’t.

He ran up and down the paddock, spooking and trying desperately to get away from the mask. His behaviour seemed to infuriate Marty who thundered after him, ears pinned and jaws agape. I thought Marty was just being a mega-jerk who was making the situation worse, but then he eventually managed to get in front and lashed out with his heels which forced Cash to slam the brakes on. I guess this was enough to interrupt Cash’s panicpanicpanic! train of thought, as moments later he finally dropped the mask. 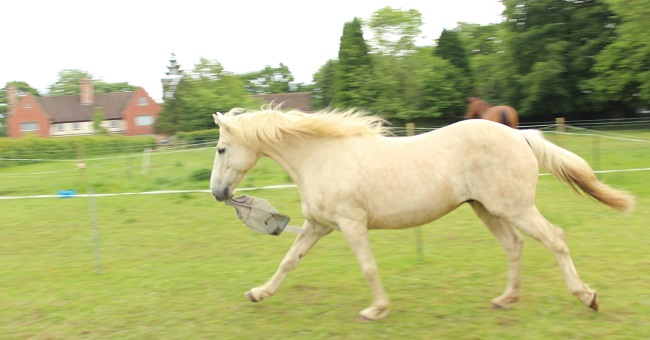 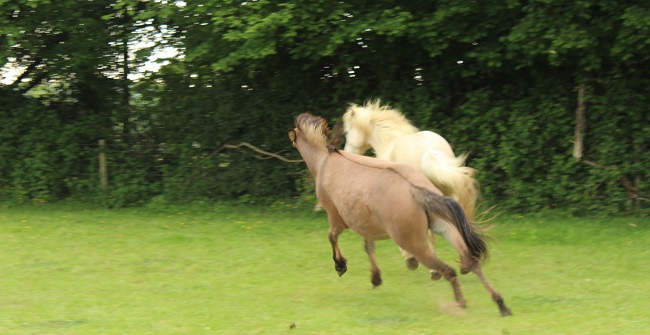 Once Cash had stopped running, Marty came over to me. He had ignored me the whole time he’d been in the horses’ paddock but now he approached, ears pricked, and wearing the expression that says: “Did I do well? I get a reward for that, right?”

I honestly believe he deliberately intervened to help Cash – even if it was in a slightly jerky way.

After that everyone got on with grazing, apart from Cash who stood and shook in a corner and had to be gently coaxed back to his usual cheerful self. I chose not to leave Marty out with them overnight, however. The paddock isn’t really big enough for three at the moment, especially not if they’re going to grump at each other. 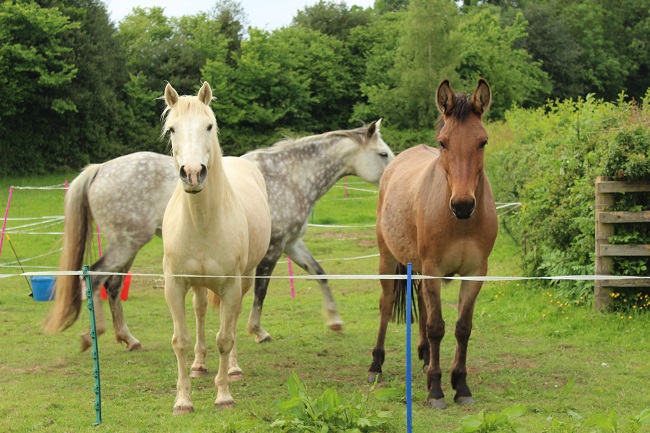 Friends again in time for dinner.