When I wrote my ‘final chapter‘ post a little over two weeks ago, it was with the assumption that Marty would not come home again. The plan had been for him to stay down in Devon with a friend, bills and livery paid for by me, until such a time that he either found a loan home or was signed over to a sanctuary. I’d figured it would give me time to see if anyone wanted to take him on, before starting the sanctuary process without the pressure of needing to move him on quickly.

Unfortunately, for reasons that are no one’s fault, that plan had to be cancelled and I was faced with needing to make a decision very quickly. Anna could not keep him on much longer at hers, and I knew that if I brought him home it would probably rule out the Donkey Sanctuary as a possible place for him – they are based in Devon, so it had seemed silly to travel him all the way back to Surrey if he was only going to go back down again. Silly, and rather expensive!

I did in fact contact the Donkey Sanctuary. They messaged me to say that it would be at least two weeks before they could send their behaviourist out to assess him, and so I took that as a sign and closed that door.

In the meantime, I’d been in talks with my friend, P, who owns some land across the lane from where we keep our horses. She has two mares and I’ve been poo-picking for her five days a week for the last three years. We came to an arrangement where Marty could live with her in exchange for me doing all the poo-picking. The plan was to move him in with her as soon as he came back; that way, if things look like they won’t work out for him there, he could still come back to ours. I do plan on getting another mule at some point, so I hope this works out. We only have space for three at our livery. 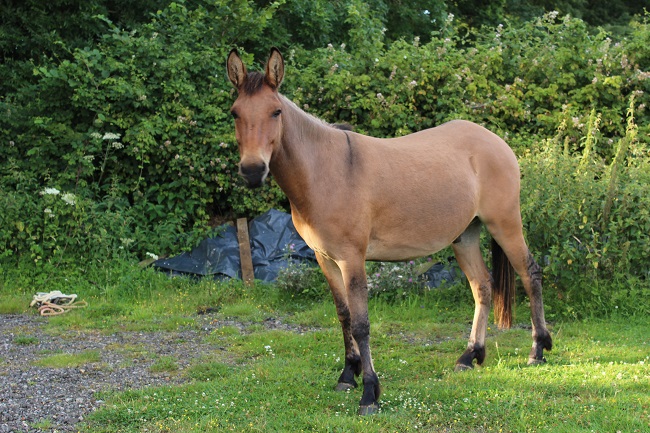 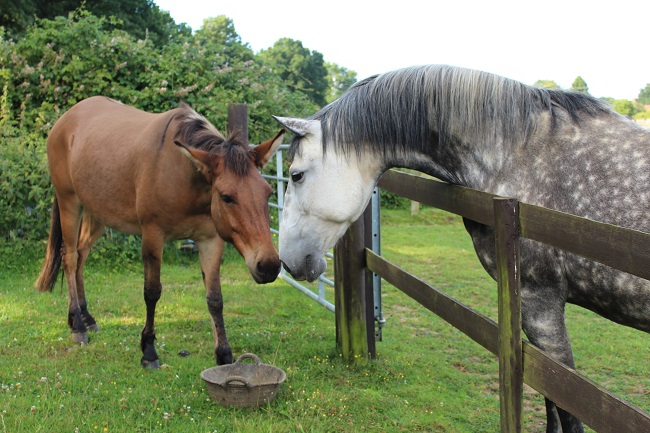 Meeting one of his new fieldmates… 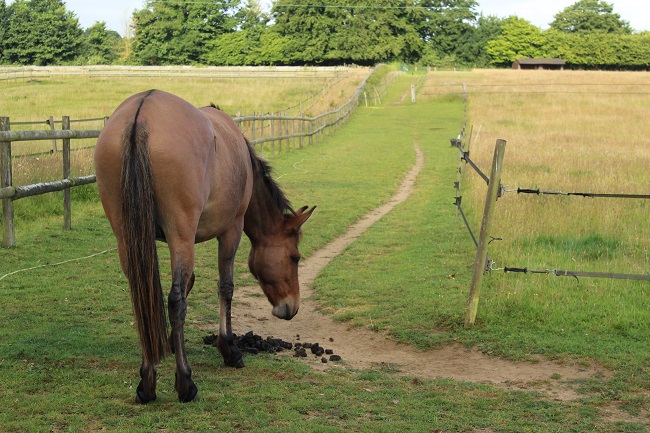 …and meeting them the proper way. 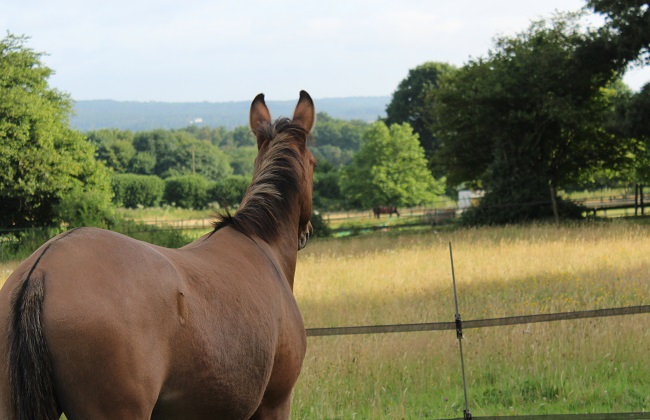 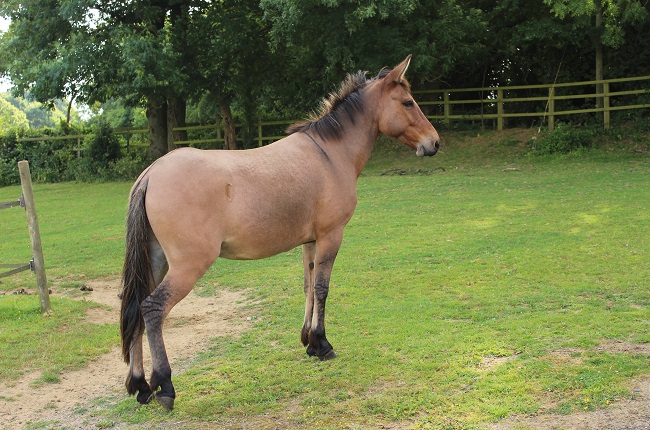 Just another gratuitous “my mule is so handsome” photo. I love this time of year when his leg stripes are at their best!

This new place is pretty much heaven for a mule. P keeps her horses on a track system, which means he will be getting a lot more exercise than he does in our fields. There is more for him to see, more for him to do. If the mares ever let him share, then there are two double field shelters for him too. I will be very interested to see how this increased enrichment effects his attitude to life.

Because of the track, it was very difficult to set up the standard introduction pen; I worried that, if the mares disappeared up the other end of the field, then Marty would panic and break out. So instead I let him out on the track at 8am, after the mares had been put in their stables. This allowed him to orientate himself and get used to his new fieldmates (and they to him). I hung out with him for an hour before heading off to work, which is conveniently located next door – so I was able to keep an eye on him!

He had completely ignored me when I first turned him out. I trailed after him as he walked halfway up the track, only for him to turn around, carefully ignore my offered hand, and walk halfway up the other side. After a few minutes of this he walked straight up to me and asked for scratchies. I then got the impression that he wanted me to show him around – so I started walking, and he instantly fell into step beside me. He walked all around the track with me. It felt great – there was nothing on his head, but he was walking as though there was. I felt so privileged that he was trusting me to lead him around this strange new environment. 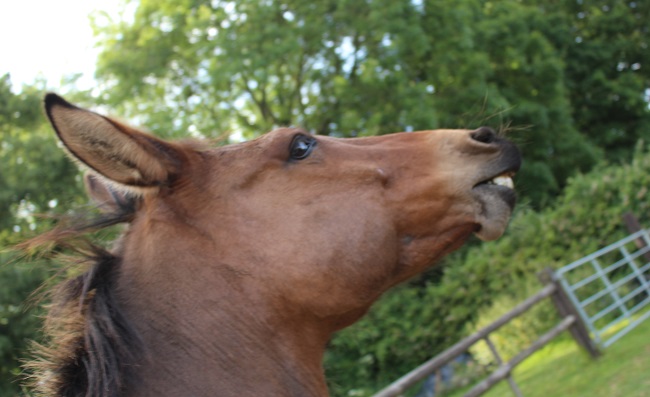 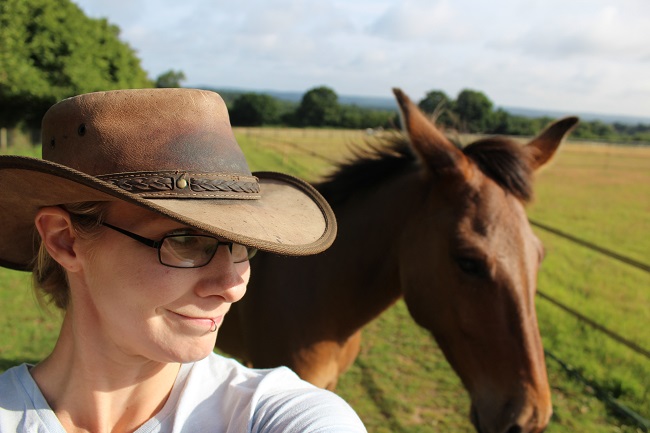 The “omg my mule likes me” selfie.

I finished work four hours later, and P and I let the mares out. To our surprise, the mare who we had not thought would be a problem had a major problem. Her problem was Marty. She told him very firmly where to go. Marty didn’t seem to think she really meant it the first time, and got chomped hard on his butt. No skin was broken, but I think it made him think twice about ignoring her the next time! A good lesson for a mule to learn.

Although we hadn’t expected quite this level of animosity – she had met him before, many times – I wasn’t too worried. The mare in question is, shall we say, rather rotund and I knew that if it came to it Marty could easily outrun her. 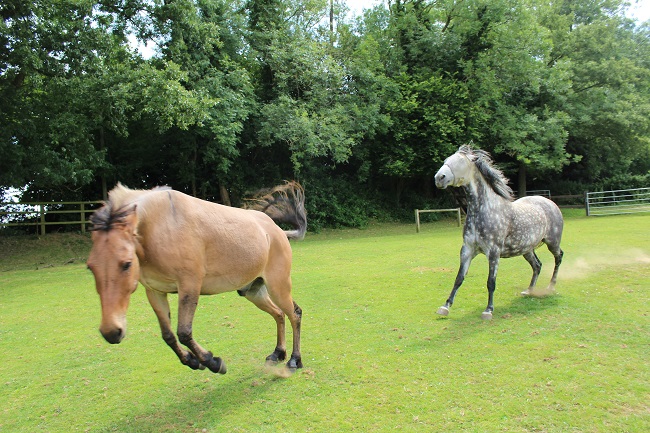 After he’d been shown his place, he looked a little bewildered and I felt sorry for him, so I took him on another walk around the track. One section is very narrow, and he was coming down as I walked up. I greeted him, asked him to walk with me, and carried on. Marty started walking backwards! It was the most beautiful back-up, but I was utterly perplexed as to why he was doing it until I realised that he thought the fencing on either side was live. He didn’t think he could turn. 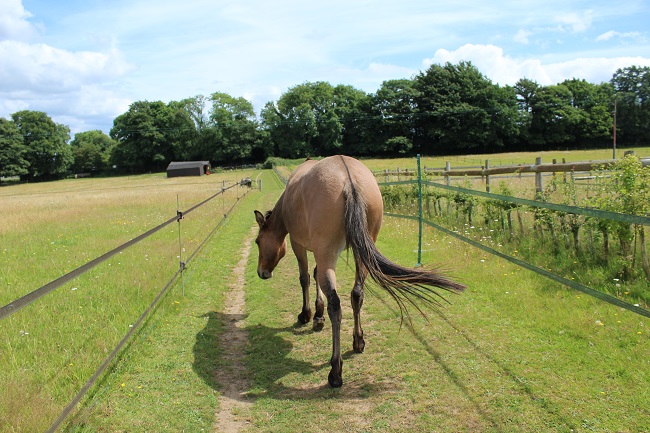 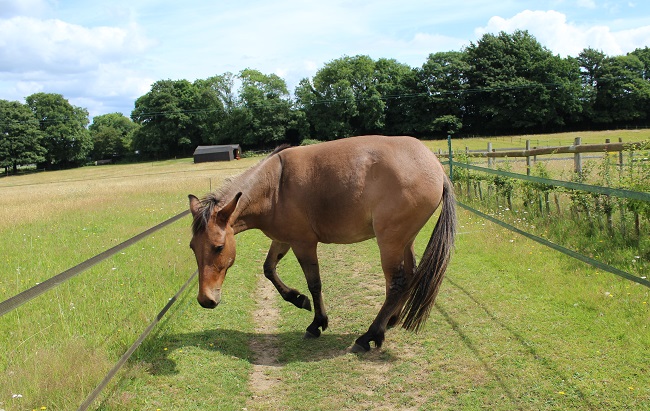 Eventually, he gave it a try; although he had to make himself spherical to do it! He has since realised that he can turn in this area. 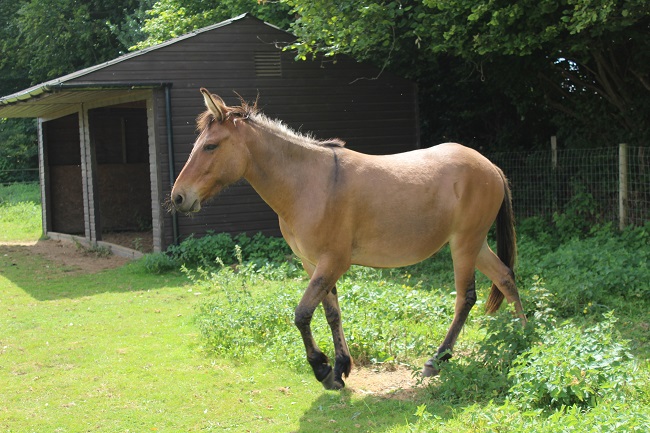 Yet another Handsome Mule photo … he’s growing into a fine looking young man! 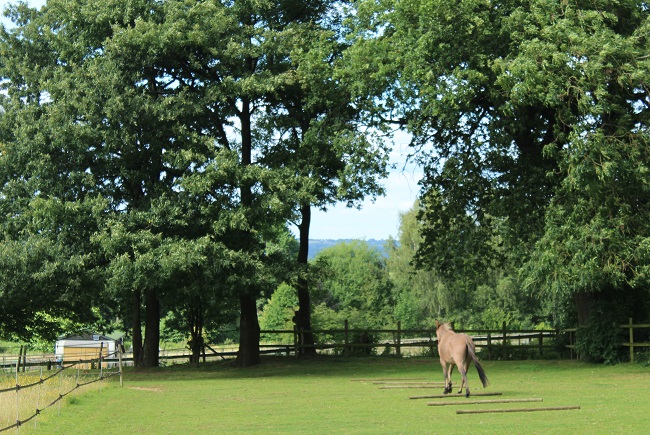 Feeling braver, he explores part of the track on his own. He chose to walk over those poles himself.

P brings her mares in for a few hours in the morning and a few hours in the evening. We had initially thought to leave Marty loose during these times, but decided it would be easier for P if he was also corralled. He’s no bother and is very polite and friendly, but the grey mare was quite stroppy about having to do anything if she thought he might approach her!

As I wasn’t sure that he’d go in the stable (I’m trying to set things up so that his daily routine can be done without the need for a halter), I built a little run-in pen for him. It’s a good set-up. He didn’t mind the stable at all and went in of his own accord, despite the fact that it has rubber matting (something he’s not used to); so he has an area to stand if it’s raining or if he wants to get away from the flies. He also likes to use these times as an opportunity for a nap. Although he’s getting on much better with the mares now, and the grey rarely does more than pin her ears at him, I guess he feels like he can properly relax if he’s behind a fence! I’m sure they’ll all be friends by this time next week. Marty has a way of endearing himself to everyone he meets. 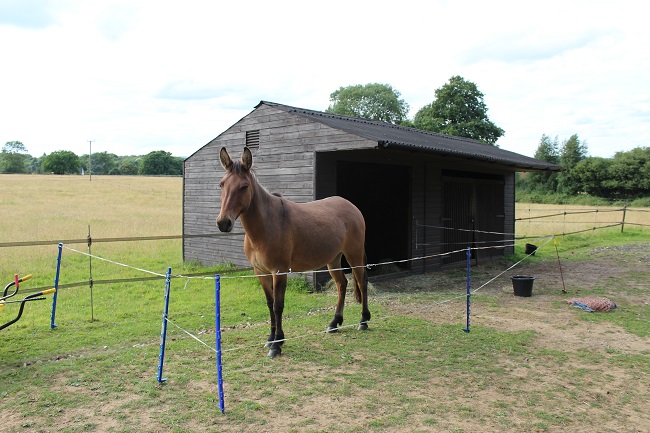 This is not a permanent solution. My visit with Anna last weekend helped me see that Marty really needs someone with more experience, but at the same time, I also started to remember how much I like the little guy. I especially like him now that all pressure is off and neither of us are under any obligations to achieve anything. However, I am not sure that it is kind to keep an animal for the sake of sentimentality when they could unlock their potential, and maybe move past some long-term worries, with a different individual.