Marty continues to settle in well to his new lifestyle. We’ve gone past the clingy stage, where he began to panic if I tried to leave or would run to greet my return, braying as loud as he could; now he’s in the “I’m a cool teenager posting photos of gang-signs on Facebook oh crap mum’s seen me” phase. To be honest, that’s normal Marty behaviour. He has a lot of bravado but he likes someone to give him a cuddle when he’s scared.

He is feeling remarkably mellow at the moment. Whether that’s a result of his time at school, or his new healthy track-life, or a combination of both – I don’t know, but it’s nice. I think the routine of coming into his pen twice a day is good for him. He learns patience, as he usually stays in there for a few hours each time; it gives him stability, as he knows exactly when people will arrive (or specifically, when food will arrive); and he also knows that when he’s in there he’s on my time – I can do things with him – and the rest of the time is his own to do with as he pleases.

A few times he has really surprised me with just how laid-back he is about things now. The other day, I arrived at the field and he came up to the gate to greet me and to get scratchies. In order to reach him better, I climbed the gate. He didn’t react at all to me appearing above him – he was standing broadside, having lined up perfectly – and he didn’t react when I accidentally bumped him in the loins with my toe! I’d kept scratching him and he just poked his nose, wagged his lip and gurned throughout. Impressed, I sat the gate for a while before deciding to see what would happen if I rested my knees on his side while I scratched. Again, he didn’t stir. Then I decided to lay my leg over his back – he didn’t tense up, he didn’t move away, he just kept enjoying his scratchies. He moved his head from side to side a few times to better enjoy the scratching, which meant that he saw my boot out of both eyes and that didn’t concern him either. 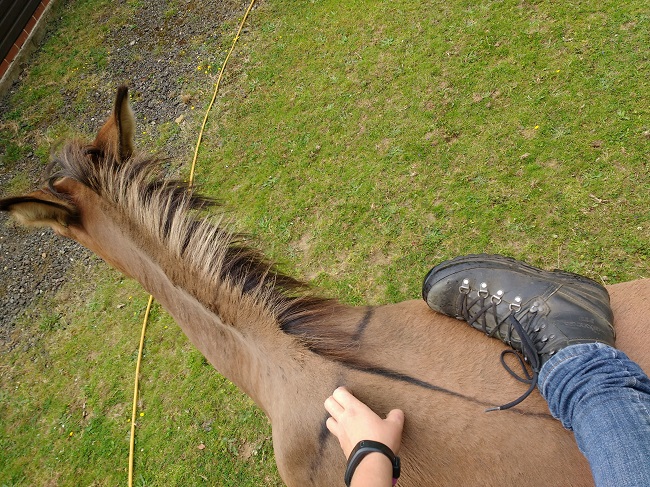 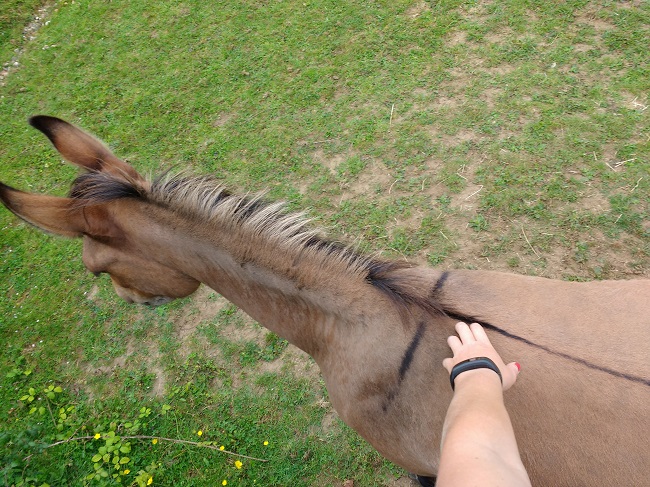 I’ve done that twice now, and I’ve also done a bit on the ground with him where I rested my forearms on his back and jumped up and down like I was about to spring on board. He stood nicely, then looked hopefully for scratchies afterwards. All these things were spur of the moment that I did just because it felt right at the time.

Of course, another time he flipped the hell out because I touched his mane (I was thinking about cutting it and was trying to figure out how I would do it, and if it would look stupid to leave the forelock. I think I was probably focused too intently on that danger-area behind his ears, and it made him uncomfortable). So, he’s still Marty. Just with a little bit more maturity. 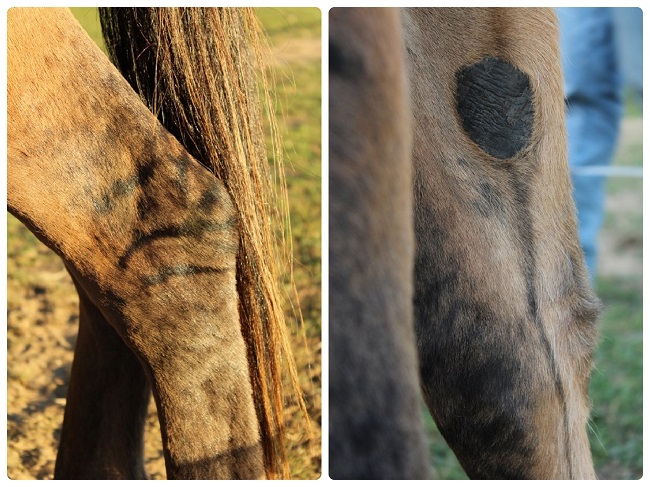 It’s that great time of year when his stripes are extra visible on his legs. I’ve just realised that his his hock stripe resembles a sideways Eolh – the rune for life, and protection. I love the little stripe and chestnut on the inside of his forelegs, too.

I’m not suggesting that either of the good things mean he’s suddenly turned a corner and is ready to be ridden, but it made me stop and reevaluate a few things, that’s for sure. I’m still not sure what to do with him. I genuinely think he would benefit from a more experienced owner, but at the same time I’m quite keen on the idea of teaching him to pack rather than ride and that seems a lot more achievable at the moment. Or at least, it’s achievable if I can find anyone to teach me how to pack. There’s only so much you can learn from books… 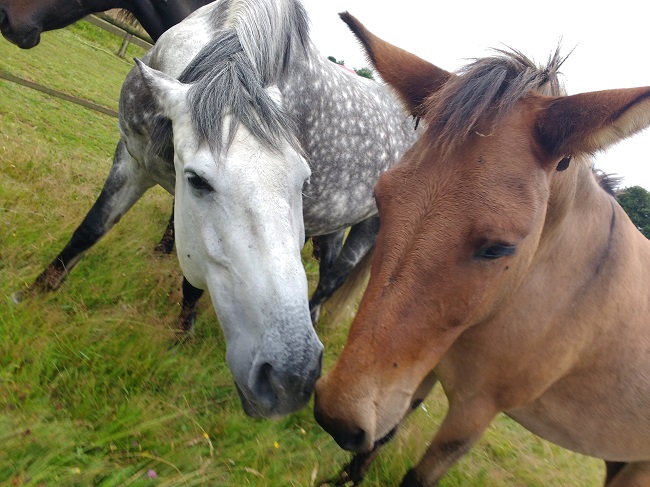 He has more or less been accepted by the locals. 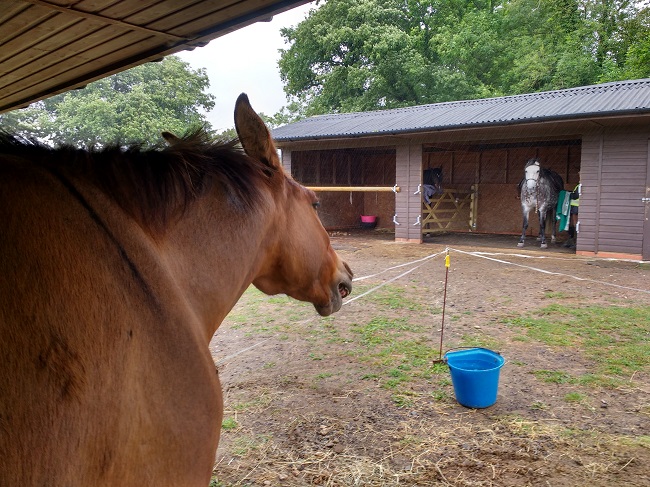 He has figured out that field shelters are a great place to enjoy scratchies when the weather is awful. 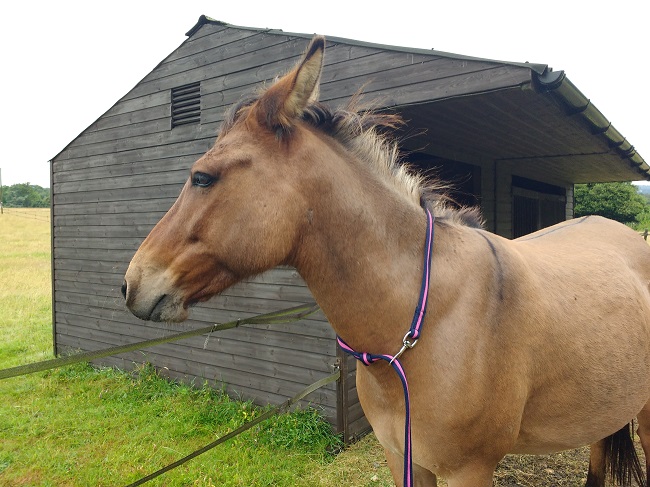 His new neckrope is very fetching but he doesn’t want the girls to see him in it. He is, after all, a magnificent and untameable stallion.

As of Sunday, he and the mares have started going into the middle overnight. In all honesty this is probably not ideal as he certainly doesn’t need the grass, but unfortunately there isn’t a way to give the horses free access and keep him out. So I’m trialing it and seeing how it goes. 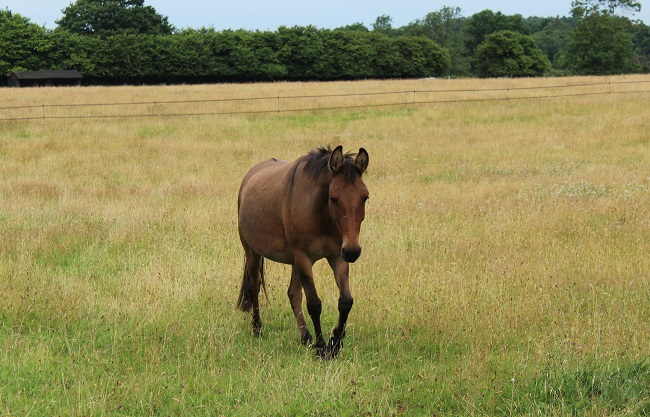 On Monday morning he brought himself out when he saw me arrive, but on Tuesday morning I had to go and fetch him. I was interested to see how that would work out. Anna had told me that it was probably not a good idea to try haltering him in a large area anymore, so I went out with a leadrope and put it round his neck. He shied away from my first attempt at touching him, but then I was able to approach him again and lead him out. We jammed up a couple of times, but he didn’t actually try to leave at any point. I just had to give him a moment to figure it out. I was really pleased. 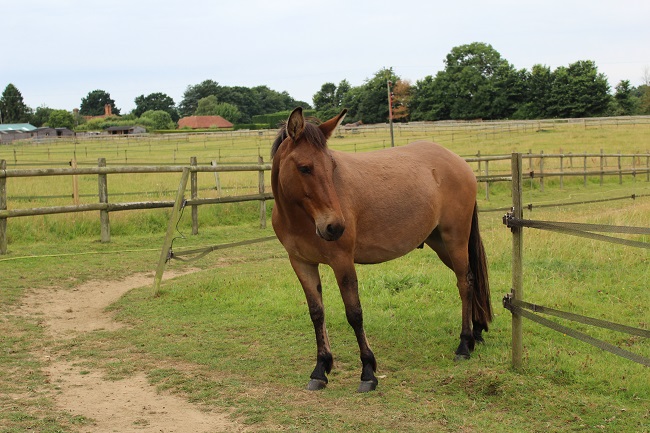 “Hmm … maybe I didn’t mean to come out after all.” 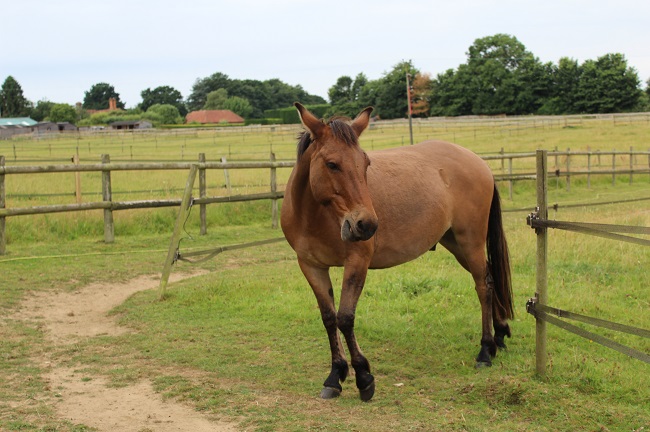 “Welp, there’s only one thing for it…” 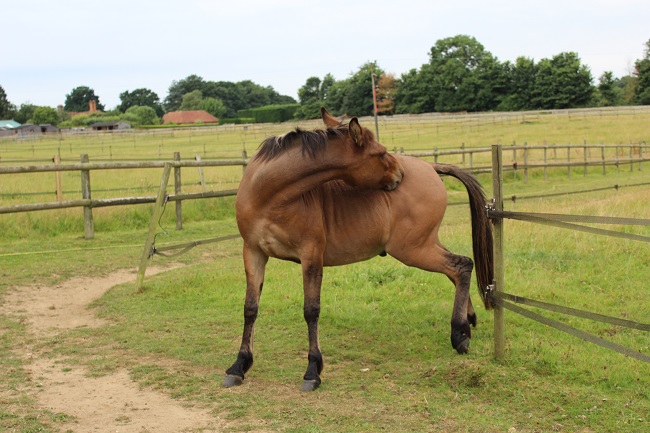 “…Time for a butt scratch.”