Marty had a busy day on Sunday. I took him out for a walk in the morning (on our own! The confidence coaching is working!) and in the evening we did an in-hand dressage test, just for fun.

The walk was short – a mile down the lane, around the green, and back again – but successful. I was able to practice changing and directing his thought, as Anna had taught us, on two occasions: the first was when he froze rigid because there was an elderly gentleman walking down the road and using a stick (obviously for the purpose of beating mules with), and again when a fluffy cat appeared briefly on the lane ahead of us before disappearing up the bank and into the undergrowth. 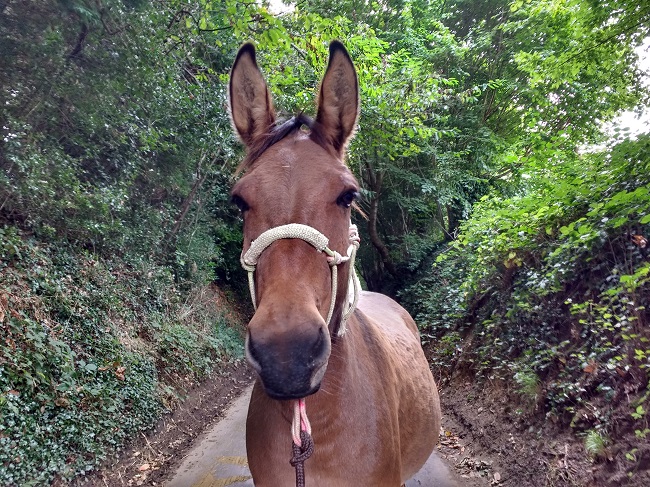 I was particularly pleased with the cat-induced training. We were very nearly home by that point, and he had really relaxed into himself: his ears were flopped sideways, his stride was easy, we were both content. But after the cat’s appearance he just could not let it go, and switched to a stilted walk with his head high, neck stiff, mouth tight, and his breathing quick and heavy. I did not want to end the walk with that level of anxiety in him. I had to get quite ‘loud’ before I was able to get through, but eventually I was able to tip his nose smoothly from left to right and could ask for back-up with his head low and back nicely rounded. We pulled over to let a car pass, and that small break allowed Marty to process and let down. He gave a great sigh, relaxed his neck muscles, licked and chewed, and we strolled sedately home. 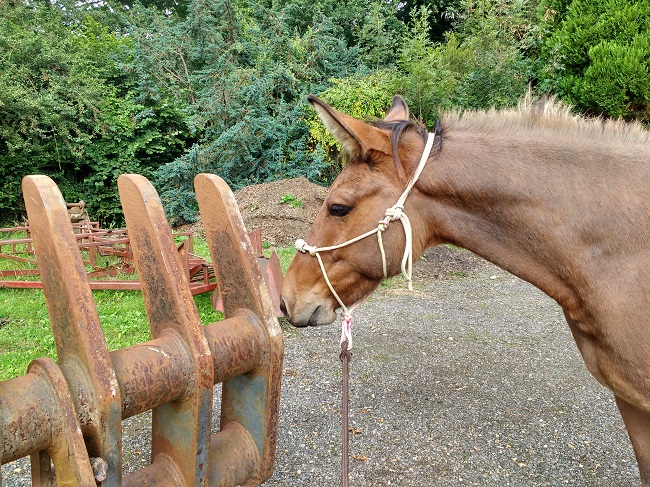 His most impressive moment was when a herd of cyclists came round the corner and whizzed past us. I felt that his non-reaction was a noteworthy accomplishment, because not only were there a lot of them in a bunch, all sweeping down towards us, but as they were coasting downhill the combined whirr of their wheels sent up this loud, eerie buzzing sound which rose in pitch as they drew level with us. But they didn’t have cats or sticks, so I guess there was no danger to mules there. 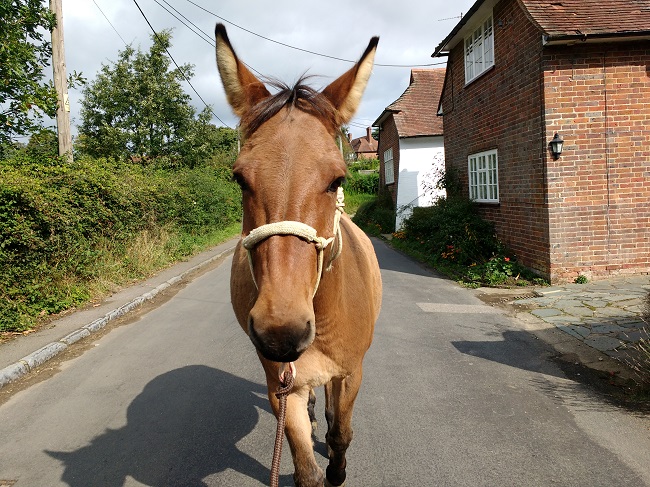 The evening’s task came about because Ben has recently joined Concordia and had a dressage test to submit. After filming him and Iris, I thought it would be fun to have a go with Marty in hand; we obviously couldn’t compete, but I was interested to see if we could do it and, if not, what areas we would need to work on. 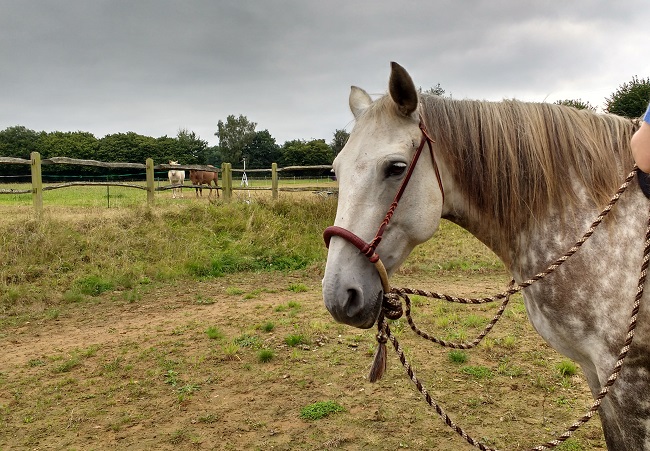 The boys came down to this end of the track in order to watch Iris’ big debut. She looks thrilled by this.

On the third run, Marty jammed the breaks on before we reached the end of the arena and refused to move. We started again.

On the fourth run, he did it again.

I felt really frustrated because we had done it so nicely to begin with, and I was annoyed with myself for messing it up. Had the unplanned halt happened in our first attempt then I would probably have left it in for the comedy value, but I didn’t want to sell ourselves short when I knew we could do it so much better!

So, back to the start, I had a think about things, and then we did the test that you can see in the video below. I realised that Marty’s refusal to move was because, in his mind, he had done as I’d asked twice – so why was I asking him to do it again when he’d already done it perfectly? That’s mule logic for you!

Note: the reason the video skips at around 30 secs is because Ben forgot to pan the camera, and we thought we’d better edit out the prolonged footage of the hedge!!

There are obviously things to work on; for example, although Marty is coming with me, he’s not with me. This is something Anna noted. You can see that he waits for the pressure on the halter before actually breaking into trot. Ideally I would like him to start trotting as soon as I pick up my energy, and allow that rope to hang loose. Our first trot-to-walk transition is very poor because I dropped my energy too abruptly and startled him … I was knackered and desperate to walk. Trotting is much easier when you’re sitting down!

But overall, I’m very pleased with the little guy. He did brilliantly, and all errors were of my own making.