I normally work over Christmas – this is the first time in several years that I haven’t – and so I don’t normally get the chance to do anything with my mules besides the usual necessary chores. This year, however, I had zero obligations. It was just Ben and I, and with the forecast promising sunshine we hatched a plan to take Marty out for a picnic ramble.

Marty nearly scuppered this plan by coming down with mud fever induced cellulitis a few days before Christmas. However, as we are cellulitis veterans by this stage thanks to poor Iris, we realised that walking was actually the best thing for him. Unlike Iris, whose other ailments made it very hard for her to get much mileage in, Marty was neither lame nor sore (so long as I didn’t try to pick at his scabs, anyway). I was already taking him out in hand two or three times a day, so it wasn’t a big difference to combine several walks into one long one and add a pack saddle. I slathered his heels with Filtabac (a miracle cream which the vets gave us earlier in the year) and off we went.

We met very few people on our journey; one family were just heading out as we passed along the road, trying to wrangle a small child on her Christmas bike into the car, and an older couple were welcoming recently arrived visitors as we rambled on by. We exchanged smiles, waves, and Merry Christmases with all.

At one point, as we came over the hill and the sea came into view, I saw a buzzard rise up out of the hedge to our right and swoop away over the field. A moment later we saw another, then another, and then Ben – who is a foot taller than me, and can see over hedges – realised that there were four buzzards just hanging out together in a flooded field. While we were watching them, two red kites took flight from an oak tree beside them, and a heron came in to land. I like the idea that we had interrupted some secret avian moot.

Speaking of weird animal encounters, as we climbed up the valley a peacock butterfly fluttered nonchalantly across our path; not something you would typically expect to meet on Christmas day.

We did one of our usual 6 mile routes, round the back roads and over the mountain. We had our picnic on the highest point, sitting on giant boulders and looking out to sea while Marty picked carefully at the gorse and sampled each component of our picnic. His particular favourite was the vegetarian jerky, though he was quite sure he wanted to try the mead I’d packed in my hipflask too. He ate so much of the jerky in fact that we joked he was going to be jacked up on protein for the walk home.

Leaving the mountain, we went down ‘the big road’ for a short way before crossing back onto quieter country lanes. This is unfortunately where the Christmas spirit died, as it’s a 50mph section of road and people were determined to travel at that speed, tinsel-bedecked mule be damned. Fortunately Marty took it all in stride as usual and we reached the lanes safely.

All in all, it was a really nice way to spend Christmas and a tradition that I hope we can maintain for years to come.

Ben’s mum bought him an awesome staff when she last visited, and Ben was excited to take it walking with him. Marty was less excited. 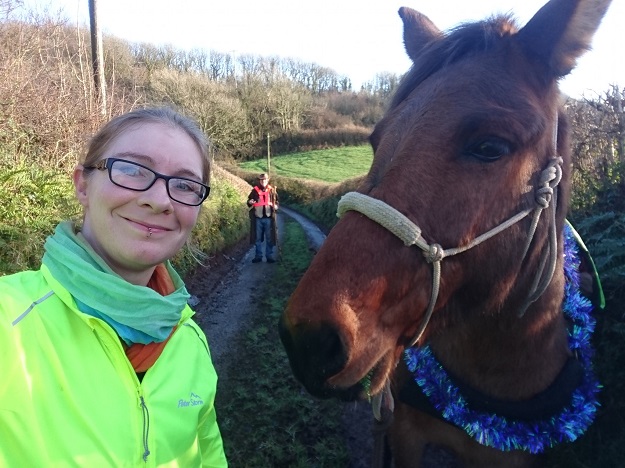 Ben and his mule-beating stick were more acceptable when they were out in front. 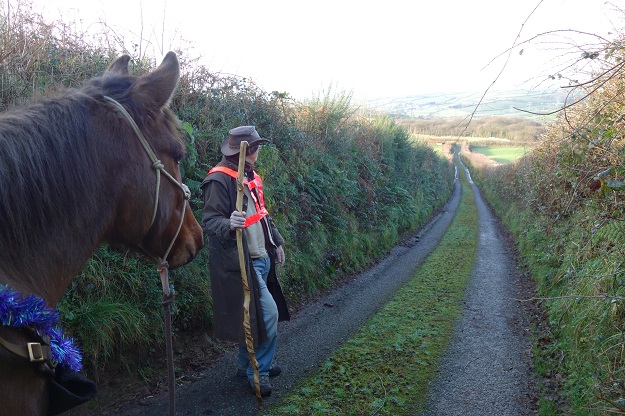 We’re supposed to be keeping Marty’s legs dry, but a flooded road meant we had little choice but to wade through it. I have my hand out as Marty briefly thought he would try and join me on the bank, which would have been A Very Bad Idea. 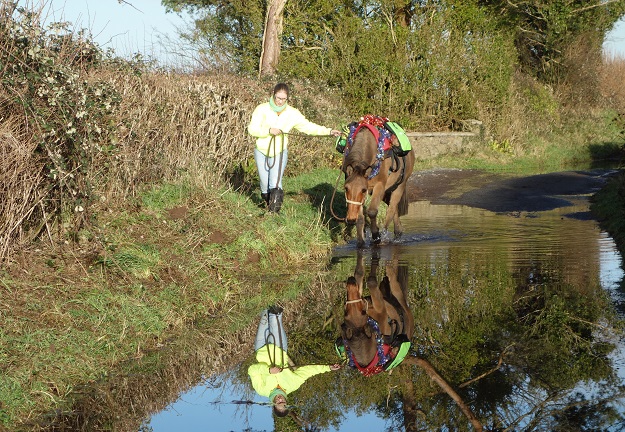 Letting Marty take the lead as we climb up to the viewpoint and picnic spot. 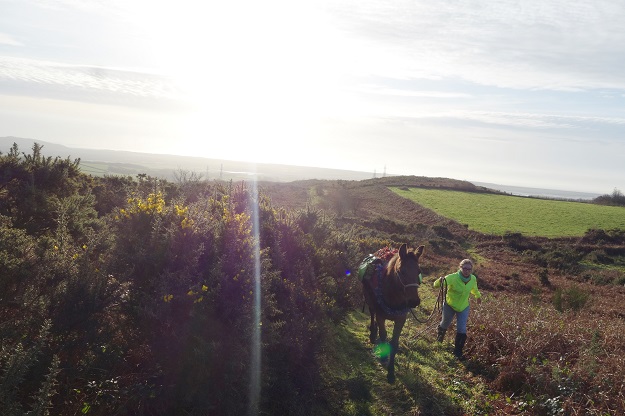 Marty is very dainty as he selects gorse flowers to eat. 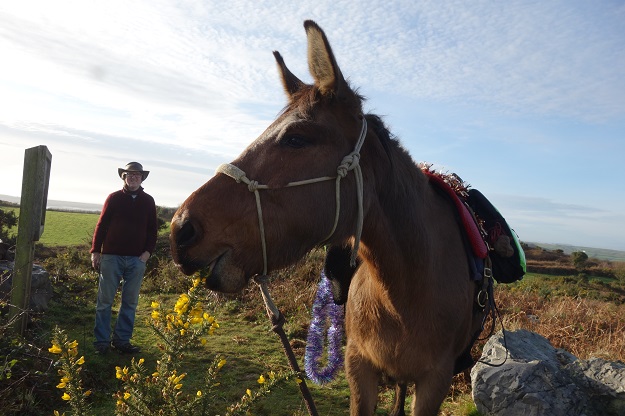 I take Marty’s pack off so he can relax, too. 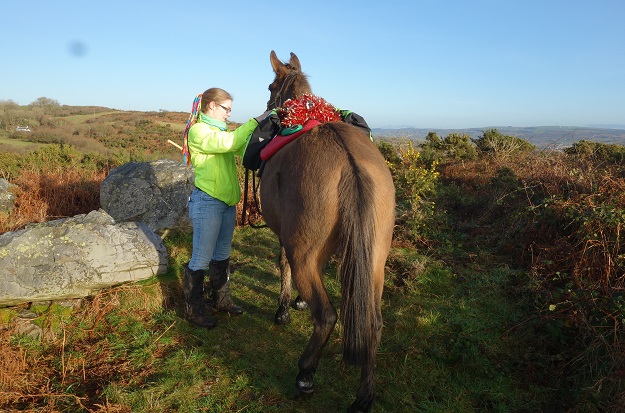 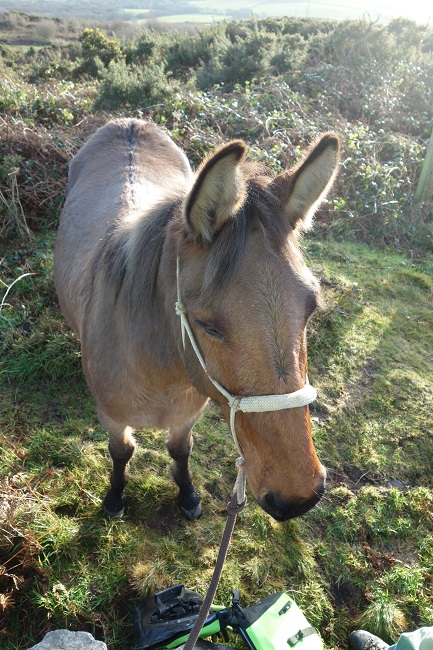 Marty does not approve of day drinking, even if it is Christmas. 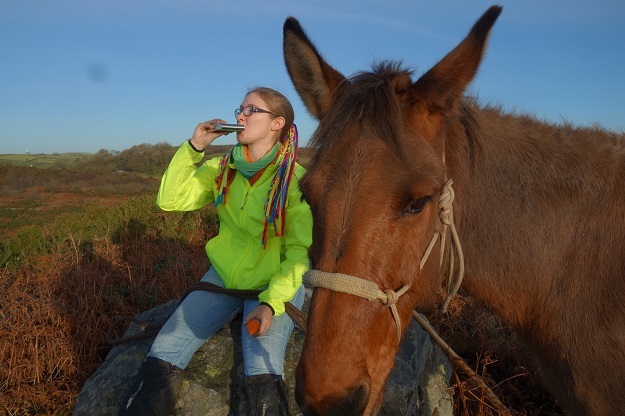 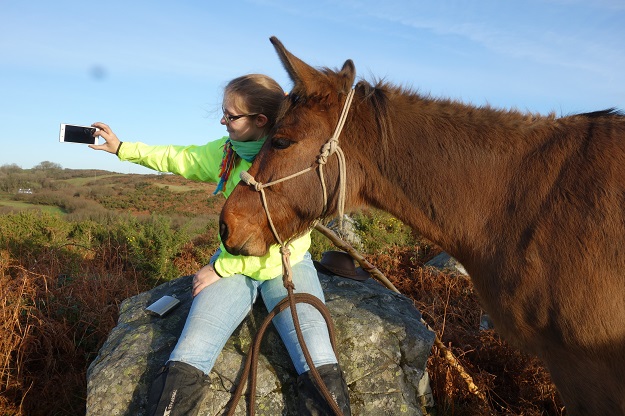 I couldn’t actually see what I was taking a picture of, as the sun was so ridiculously bright. It’s mostly a photo of Ben. 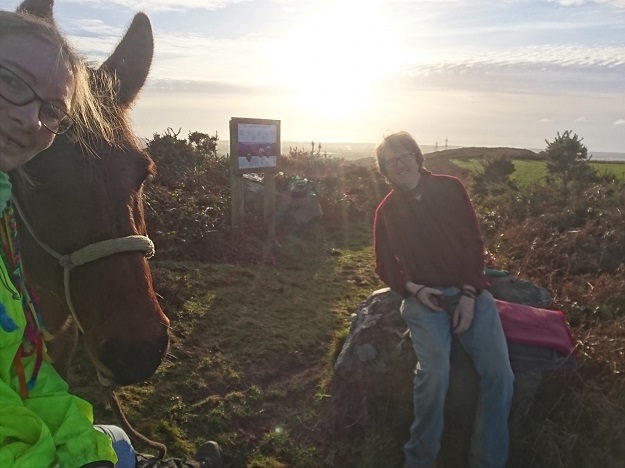 The sun, which had been beaming down on us for the last couple of hours, abruptly went behind clouds just as we were finishing our picnic and plunged us into a distinctly greyer, more winter-appropriate day. Oh well – it was nice while it lasted! 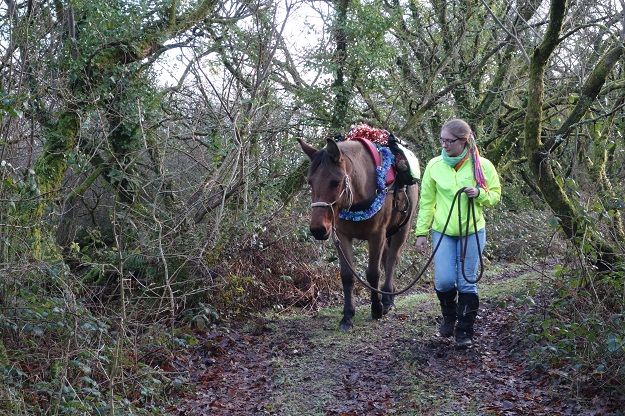 Still time for a sneaky drinky, though. 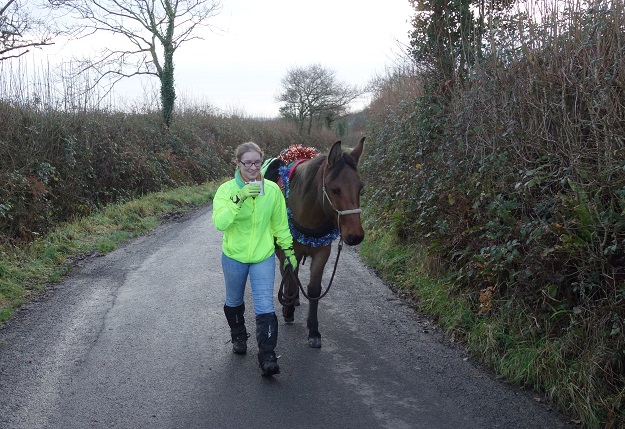 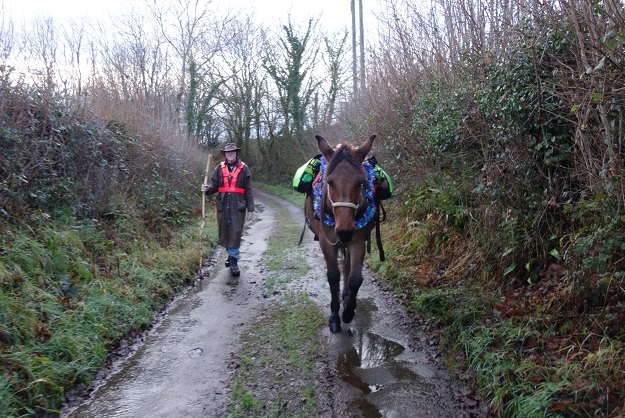 We untacked him at the top of the drive so that he could roll in the arena and have a graze. Ben carried the saddle home and I carried the packs; it was Christmas, after all. Even the world’s hardest working pack mule gets a break sometimes. 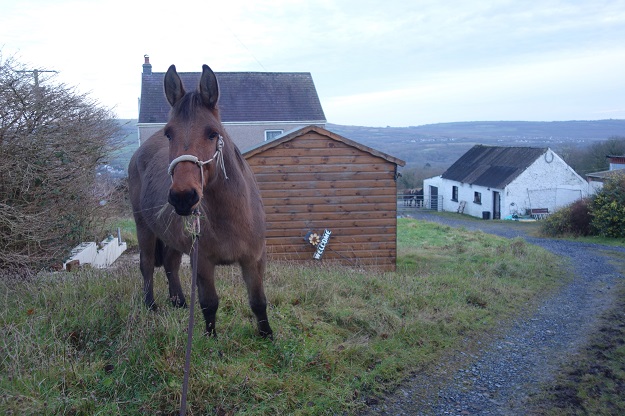