It was my birthday on Saturday and I had no idea how to celebrate. Ben had suggested that we go away somewhere, but to be honest I’ve spent so much money on mules this year that I couldn’t face the idea of something so decadent as a holiday – not until I’ve had a chance to scrape some cash together, anyway! Plus, we’ve only recently come back from Mallorca. That pretty much counts as a birthday trip, I think.

Eventually I decided that we could just make use of what we had available to us for free, and go for a good hike around the Devil’s Punchbowl (which is one of my very favourite places in the world). A friend of mine was visiting us for the weekend and as she is unable to walk for long distances, Ben offered to lead her on Iris (medieval Lady style. In Western tack. It works!). It seemed like a waste not to be leading an equine myself, and as Marty won’t stay in the field on his own, I had to take him.

This was, admittedly, a bit of a crazy plan. 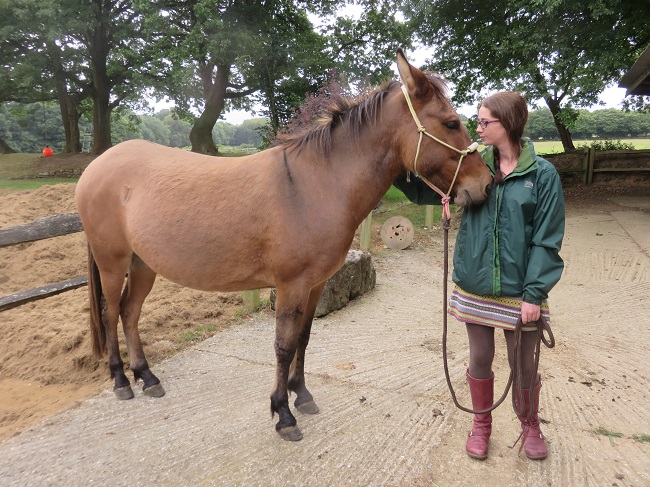 I handed Marty over to Debbie so that I could go and have a wee before we left, and when I came back he did not want to talk to me! He had a new friend now who, he said, would never carelessly abandon him like I just did.

I haven’t really done anything with Marty since he came back, besides general every day interaction and handling him for maintenance visits – trimmer, dentist etc. I had wanted to take him out for walks but my nerves had always got the better of me (hence my decision to hire a confidence coach; I will write more on that topic later). On top of this, he hasn’t been back in the Punchbowl since the Dog Incident. That was the last time he did a “long distance” (i.e. longer than half an hour!) walk with me, too; although he did go out for a nice trek while he was with Anna.

The other part of me said: but this mule has more education than he did back then. Iris is with you, and she’s the only reason he’d have to run home. Ben will be there to talk you through and if you really get nervous then you can always hand Marty over to him.  This is literally an ideal situation. You’re secretly quite excited to get out there and try it, aren’t you? 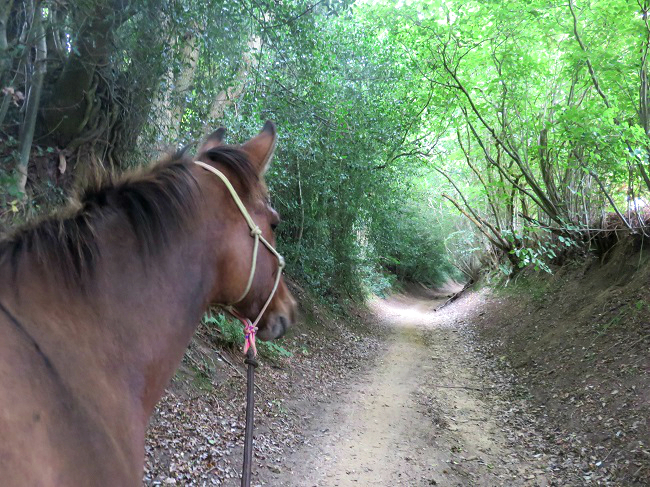 Waiting for Iris to catch up. 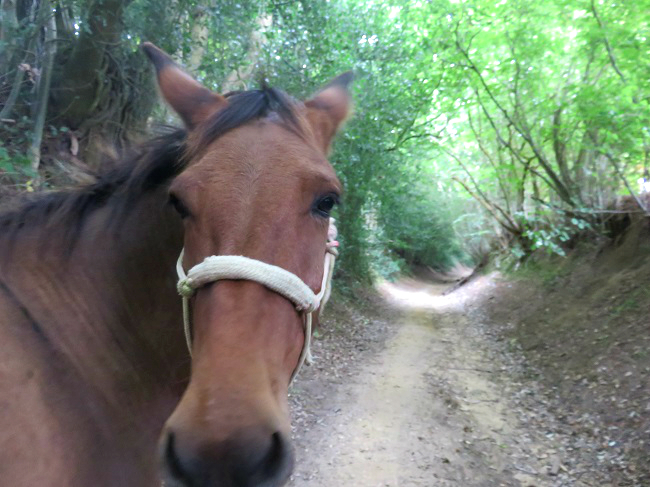 Now, I just want to take two seconds and go a little bit off-topic here. For those of you who haven’t had to deal with anxiety, then I’m glad – you’re lucky. I am also aware that it is very hard to understand those of us who do, because it is totally irrational. However, I would politely point out that it is not helpful to tell nervous people to simply “get on with it” or “stop worrying”. For an anxious equestrian, it is particularly unhelpful to point out that horses and mules need a confident leader. It’s not just patronising, it also makes the person feel even worse about themselves. We are aware that it’s silly. We are aware that our nerves often create a self-fulfilling prophecy. We do not actively choose to be this way. I wasn’t always like this around equines, but my self-confidence has taken a real battering over the past couple of years and this is the unfortunate result.

So, if anyone feels the need to make the sort of comment that pokes fun at someone’s fears, then that’s fine – that’s their prerogative. But I will not be responsible for the levels of sarcasm that may meet that kind of remark. 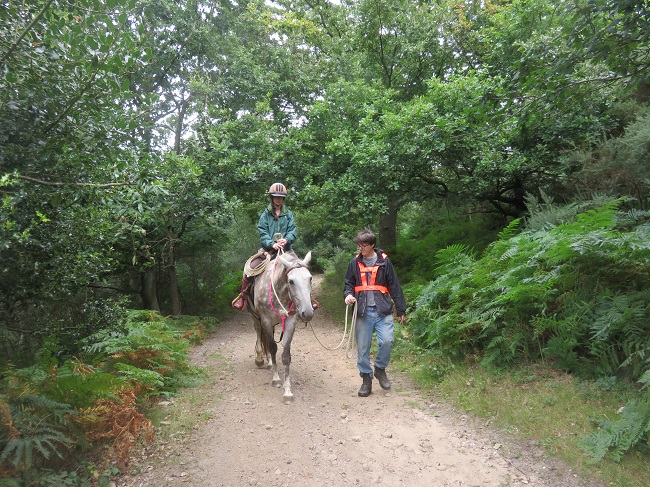 Riding was only slightly less pain-making than walking for Debbie, but Iris took good care of her. And also, ain’t nobody gonna stop Debbie from getting on a horse. 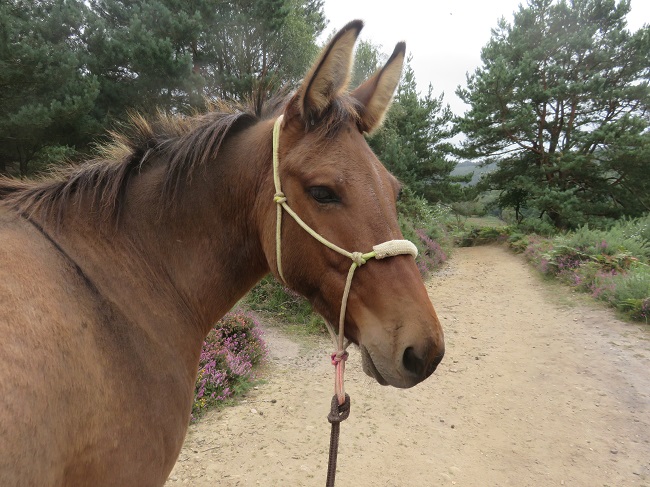 Anyway, to cut a long story short, I did take Marty out. And he was great! He led almost the entire way – the only time he was in the rear was when Iris unexpectedly overtook us as we were scaling a steep trail through the bracken (luckily, being a mule, Marty was able to balance on a pinnacle while she went past), and when our circuit route rejoined the path that led home and he planted himself and refused to move. 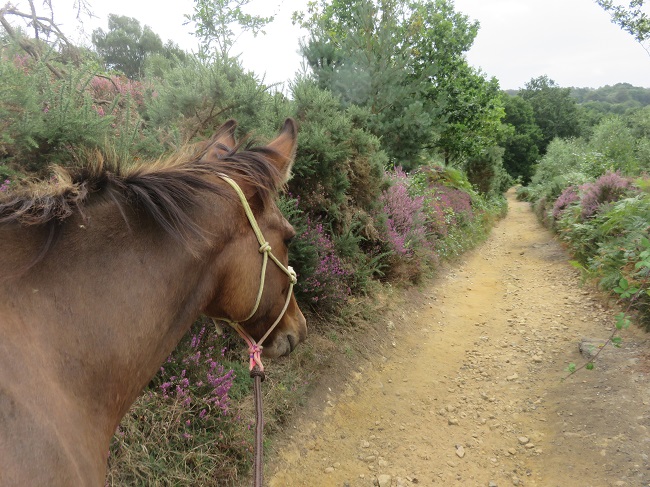 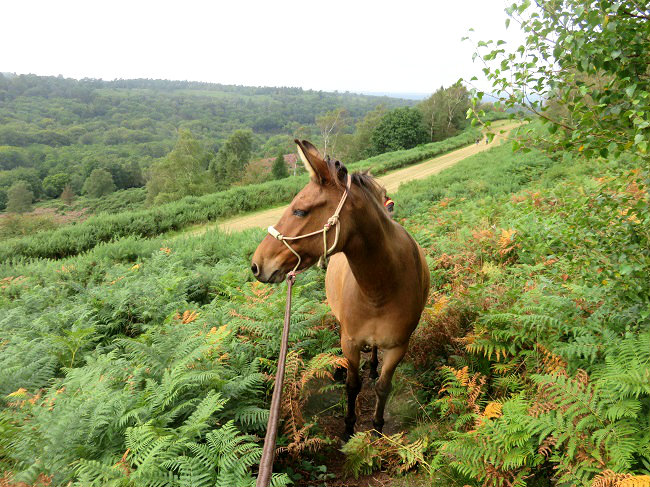 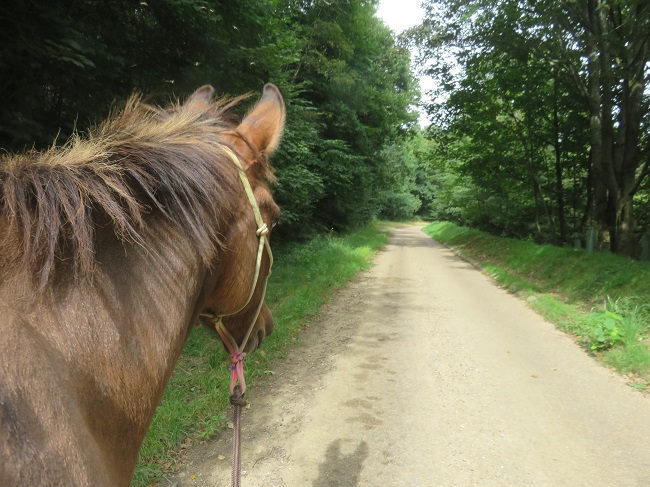 As for dogs … well, we met seven of them (although two of those encounters were the same dogs twice). They were all well-behaved and didn’t bother us, but shortly after we’d made our hill climb we encountered some cyclists with a collie. No sooner had I called to them to please take hold of their dog when the wretched thing started snarling and rushed at Iris! It decided that Iris (or possibly Ben!!) was a bit too formidable to herd, so it bounced away and came round in a semi-circle with the intention of getting up behind Marty and I. I turned to face it and Marty came with me. He was alert, but I wasn’t registering any fear from him – he didn’t try to run, and my rope was slack. I was pretty angry with the dog so I gathered up all my energy and flung it at the silly thing, which caused it to physically flinch and back off.

By that point I could hear Ben explaining to the cyclists that Marty was a mule and therefore liable to kick, so I added loudly that he would try to kill it if it came near him (to be fair, he was more likely to bolt, but it could go either way). It’s funny how fast people will fetch their dog when you point this out to them. 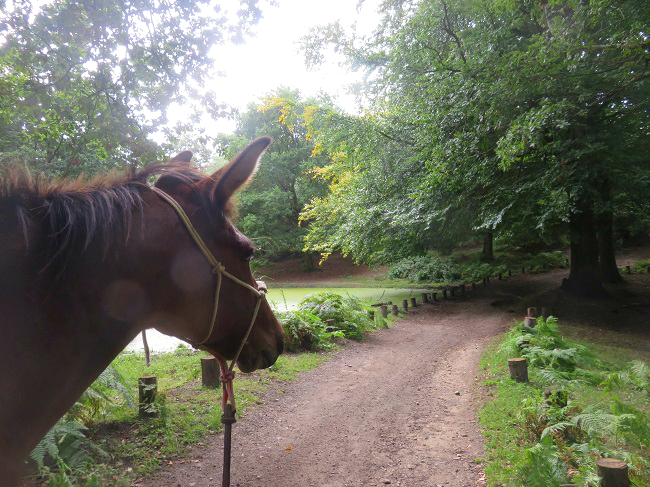 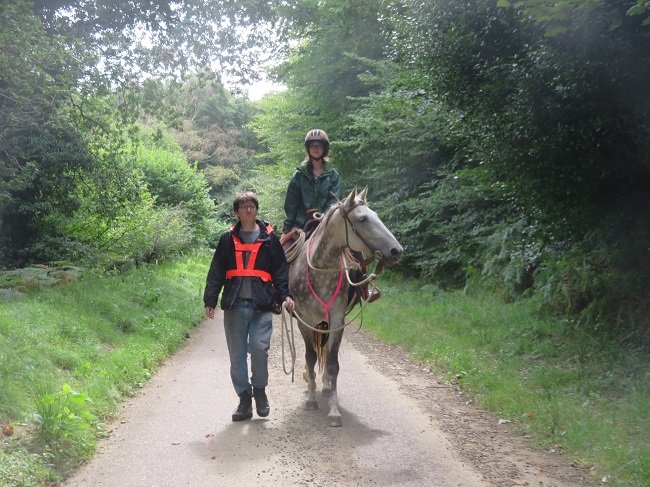 When we got back to the yard I was half-expecting Marty to be difficult to unhalter. His cup was most definitely full by that point and I didn’t think he’d be able to tolerate the unhaltering process after all his excitement. However, as soon as I clipped his neck rope on, it seemed to me that he relaxed and I was then able to remove the halter without any issue at all.

This was a big thing and shows what a great change Anna managed to get with him. Our method of pen-neck rope-halter might seem like a complicated way of doing things, but when I do it that way Marty knows all the answers and this helps his confidence immeasurably.

Maybe my confidence is getting a little better with him, as well. 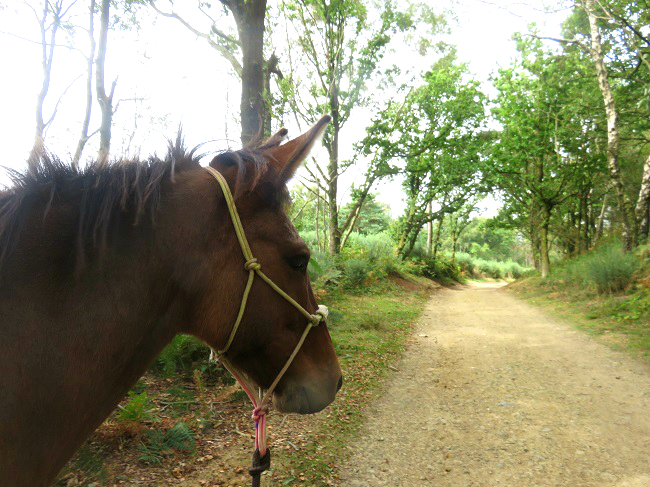 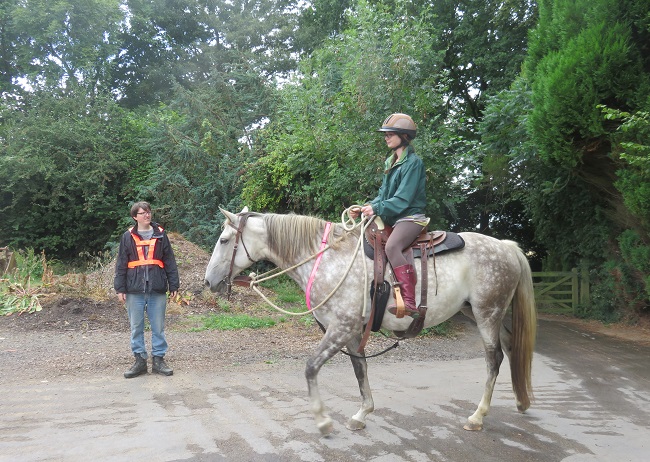 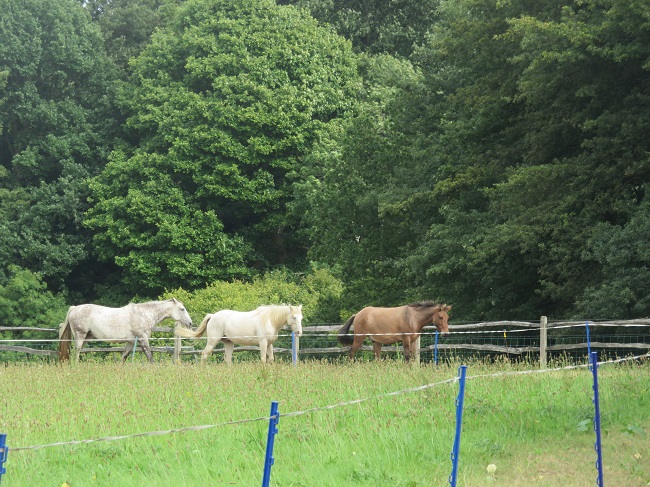 I thought this was interesting – he very rarely takes the lead when they walk from one end of the track to the other.

1 thought on “Marty and the Birthday Expedition”