As I’ve said, Marty hasn’t had much to do lately other than vet visits. On Saturday, he took matters into his own hooves by gleefully bursting out of his paddock like a cork from a champagne bottle. Cash, who was in the process of being brought through the gateway at the time, found himself used as an impromptu jump and had to signal his surprise by prancing around with his tail in the air.

Their current paddock is in the corner of a three acre field. A three acre field full of long, ungrazed, fertilised grass. As Marty galloped off with his nose in the air, I was fairly certain that we were going to spend the rest of the day trying to persuade him to come out. There was also slight concern as the main field has recently been refenced, but for some reason a large gap had been left by the gateway that leads out onto the road.

Marty. Your belly is showing. 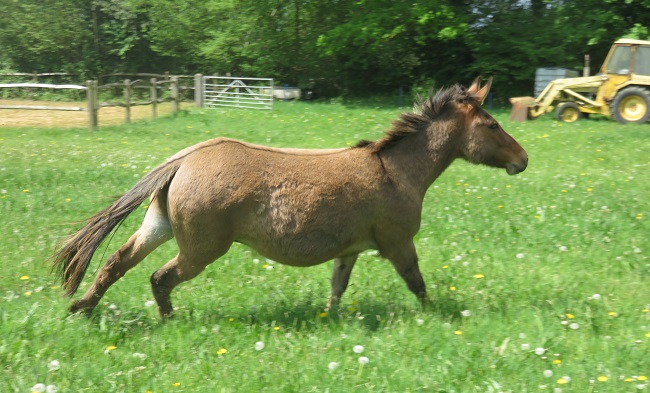 Ben and Cash wandered down to the stable yard to fetch Marty’s halter. Marty, much to my surprise, did a couple of easy circuits of the lower half of the field and then approached me and let me stroke his forehead. I was even able to stand at his shoulder and put the rope round his neck, but then the excitement got too much and he galloped off again.

It was interesting, because I was getting an entirely different vibe from him than I usually do when he’s not wanting to be caught. He’s a smart boy and he knows that if he just runs to the furthest corner of the field, he can have a break and a graze before I catch up with him. This time, however, he just ran in big circles around me.

A couple of times he stopped to snatch some grass, and I responded by picking up the energy and moving him on again; I wanted him to know that if he was out here, he was either standing quietly or he was running around. It wasn’t a lunchbreak. This was a bit of gamble, because it’s the sort of method that would work well in a round pen or arena; not necessarily in a three acre field! Once or twice, when it looked like he was getting too close to the gap onto the road, Ben told me to step to his right which pushed his hindquarters away from me and turned him. I was quite impressed how consistently that worked, despite the distance I was having to work from.

Not quite the power trot, but close. 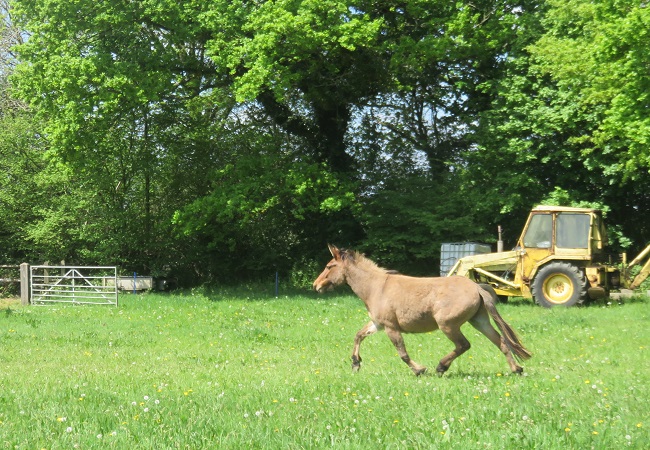 He stopped and approached me a couple more times, each time pulling away when I tried to halter him, but there was no anxiety or worry in him. I could tell that he was trying really hard – it was just all a little bit too exciting.

By this time, Ben had passed me the acceptable halter (I’d been trying to catch Marty with Iris’, as that was the one I’d had to hand at the time), and then he’d caught both horses and opened the paddock gate. Marty performed a few more circuits of the field – he has this amazing ‘power trot’ he does, presumably due to his Iberian heritage, where his knees and hocks come right up and his back and neck remain arrow straight – and then neatly put himself back in the paddock.

It took me about five minutes to catch him after that, as he kept putting himself behind Iris and peeking round at me – maybe to see if I was angry with him? It still felt like he was trying hard and wanted to be caught, but he thought I needed to work for it first.

Running around a field makes total sense to him; running between poles? Not so much. 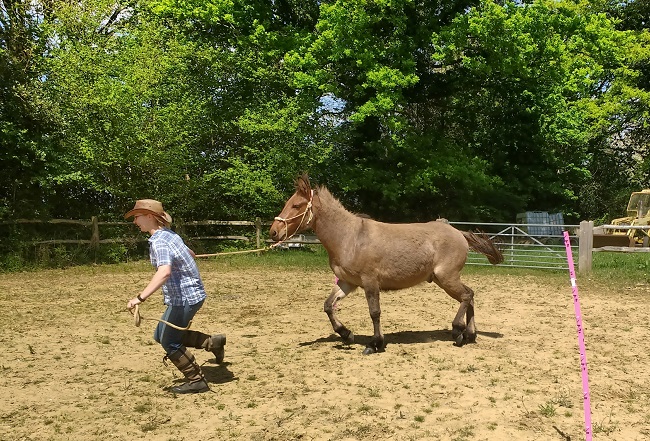 The whole thing, from escape to haltering, took no more than 20 minutes. I took the hint and figured that this was Marty’s way of saying, “Please take me out and do something with me!”. He was groomed and then taken over to the arena where we just played around for a while, practicing our ‘barrel racing’ (we had no barrels, so had to substitute poles), pole bending, lining up on a block, side-by-side back-ups and a bit of circle work. He thought my enthusiastic leaping around and shouting of “We’ve won! We’ve won!” after our barrel race was kind of weird, but he’s a lot more tolerant of sudden movements than he used to be!

He was quite silly about having his halter off once back in the paddock, which perplexed me at first. I had thought that silliness over halter removal was a symptom of a stressful work session, but I was fairly certain that he had neither been overtaxed nor worried by anything we’d done that day. Halter removal has recently become an issue for us again, whereas catching is a lot easier; so my new theory is, maybe acting up is his way of saying “I’m not done yet, I want to do more”…