A few weeks ago, I designed an “alphabet game” which I uploaded to the Horsemanship Magazine Facebook page. It was just meant as a bit of fun, something to motivate folk in the dull days of January, but all the exercises it contains are useful things to do with your equine – each one has a benefit. Backing up a hill, for example, helps them learn how to use their hindquarters effectively to balance themselves; a horse or mule who rushes downhill is usually doing so because they feel unbalanced. Doing an entire dressage test in hand may seem like some sort of elaborate torture (I did think about removing that one, but then I figured – I’ve done it myself, so I’ve no shame asking others to do it!), but actually if you can do all that from the ground without your equine dragging or anticipating then you’ve probably got a pretty good handle on them. 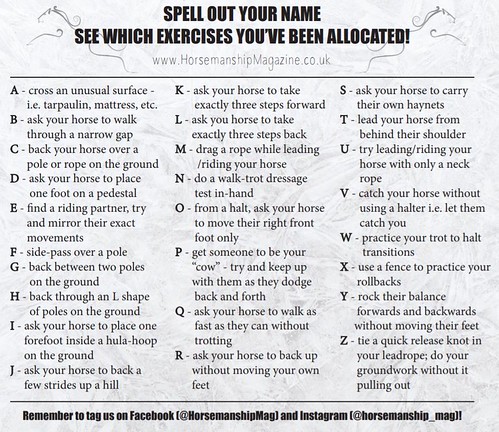 Anyway, as I’d designed it, I thought it was only right that I should have a go at it myself. I decided to do it with both my mules, spelling out their names rather than my own in order to make both challenges different. It was at this point that I really wished I’d rigged it in my favour, as the exercises I got were mostly ones that we weren’t very good at! Of course, this is the ideal outcome, as it gives us something to work on; but I am a very lazy girl and I wouldn’t have minded an easy task…

Here is the video footage of all five exercises completed with Marty. I haven’t edited any of them (except possibly one video where we go out of shot for a while, and I skip ahead), so you can see the mistakes I make and, hopefully, how I then realise my mistake and try to rectify it. It is 11 minutes long so I don’t expect everyone to watch it, although it is Marty and I think he is a pretty interesting guy to watch.

A break-down of each exercise:

M: drag a rope while leading / riding your equine

This is something I have done before with Marty, so I was a little surprised by his initial reaction; although he had just come out of one of his feral phases when we filmed this, so I should have expected it really. I showed it to him (I should perhaps have put more time into this part) and then asked him to follow the rope rather than have it drag alongside/behind him. Following a scary object is a really useful way of getting your equine used to something that bothers them. I then slowly let the rope play out and get longer and longer as we walk around.

A: cross an unusual surface

Again, something else that I’ve done with Marty. For a long time this was a real nemesis of ours – we asked him to cross a tarp when we first met him, and unfortunately the wind rustled it a little as he was crossing and he refused to go near one for about two years after that. We finally conquered it last year when Sue Gardner, of Applied Equine Behaviour, came out with her agility course. We even progressed to being able to do it completely at liberty in his field! So this was an easy one for us, although Marty remains sceptical (but not so sceptical that he can’t sneak an opportunity or two to graze). To be fair, I didn’t have a tarp to hand at this point so I used one of Xato’s old, broken rugs instead. Maybe Marty thought I was about to punish him for wrecking the damn thing in the first place. I do use treats with Marty – I’m not big on food rewards as I feel that food, although a high priority, is not what an equine wants the most; but every one is different, and with Marty I’ve found treats useful when it comes to introducing him to scary objects. I didn’t notice him do that little hop at the end – if I had, I would have asked him to cross it a few times until he was doing so comfortably!

R: ask your equine to back-up without moving your feet

Oh boy, I screwed up good on this one. Even though I wrote the damn thing and surely knew what I was talking about when I did so, I’m afraid I suffered a total brain freeze and couldn’t figure out how to ask for this. I initially tried by asking the Parelli way – or, rather, the Harry Whitney way, which involves that little wobble down the line but does not result in a raised head which the Parelli way often does. Unfortunately, I am very bad at this and Marty did not understand what I wanted. He sort of gets it in the end, but you can see how much bad feeling there is in him. I deserved to get kicked for that – what am I doing with my hands? Idiot! Anyway, when I realised what I was doing, I took a break (which a brief moment to work on him allowing me to sweep a hand over his eye, which he had momentarily objected to; probably because of the ill feeling I had already installed in him), and thought about it. I realised I didn’t have to shake the rope, I just had to pick it up and ask.

T: lead your horse from behind their shoulder

Well I thought this one would be a lot easier than it was! When we’re out walking, Marty is more than happy* to stride ahead on the trail and I will often walk level with his girth or sometimes even back towards his hip. However, I guess my intentions were different here and he really struggled with it. I do think we would have done better had I broken it down into one step at a time, rather than trying to get a whole string of steps in one go.

* In conclusion, I think what I was seeing as Marty being “keen” or “excited” was actually him exhibiting worry while out on the trail.

Y: rock their balance forwards and backwards without moving their feet

He doesn’t understand what I’m asking for at first – I’m asking very badly. He thinks I want him to lower his head. He tries very hard sometimes! Luckily I do realise this and break to reward him for that. He definitely found rocking back much easier than rocking forward, and I decided to leave it at that because that seemed pretty good for a first try to me. After that I did a bit of work on our forwards/backwards transitions which he is usually quite good at, to help him feel better about things again; I think I rushed this, though, and if I had the chance to repeat I would definitely keep working on this until it was smooth and done with good feeling. 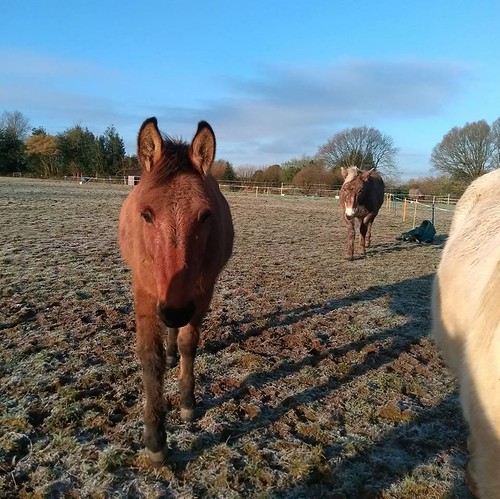 So, that was mine and Marty’s attempt at the alphabet game. This certainly isn’t a how to and I’m sure there’s loads of ways I’ve messed up, but as always, I like to explain why I did what I did. It was definitely a fun thing to do and a good learning experience as well.

2 thoughts on “Marty and the Alphabet Game”