Marty’s haltering issue continues to be a perplexing one. Since his explosion on Saturday, he has been catchable; I hesitate to say that he’s “fine” to catch, because he checks out while I’m doing it. The shutters come down and mule isn’t home. This is something he’s been doing on and off for a while, but I’ve been hesitant to write about it for obvious reasons.

If he’s not in his high energy, hairline trigger mode, then I am able to halter him easily but his eye will take on a vacant look and, when I offer him his treat (I use food as a reward once the halter is on), he doesn’t respond. I have to either gently wiggle the leadrope to ask for head down, or I have to bring the treat up to his mouth. Once he’s ‘snapped out’ of this trance, he is absolutely fine and will move off quietly when asked. There are no further signs of anxiety. 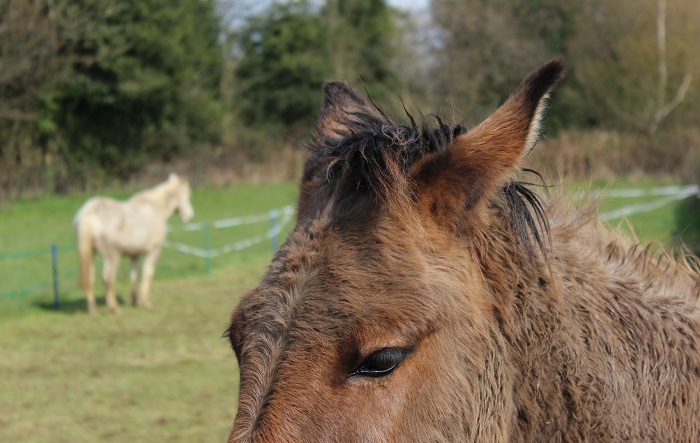 This would all appear to be a classic case of shutting down. A shut down animal can often be mistaken for one who has accepted whatever is happening around it, and it is usually caused by flooding the animal with stimuli and giving it no other option than to comply and hope for the best.

When working with potentially scary things such as desensitising, a good way to check that you haven’t shut the animal down is to see how they move when asked to walk off afterwards. You can also apply the scary thing while they’re moving and see how they handle that. It’s easy to hunker down and shut everything out while their feet are still, not so much when they’re moving.

Using Cash as a shield from Scary Ben. Scary Ben does not invite the shut down response. Scary Ben invites the run-like-hell response because, even though he’s never once done anything to harm anyone ever, he’s almost certainly waiting for an opportunity to steal mule ears. 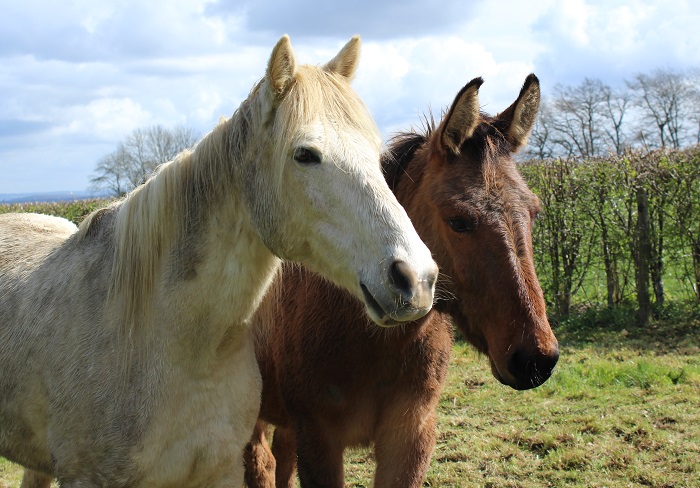 But with Marty, his reaction doesn’t make a lot of sense. He has never been forcibly haltered. He is not shy about spinning or running out backwards or simply refusing to let the halter come near him at all, so why choose to express himself in this way? Is it that he is trying to comply, but fear of discomfort (the skeletal and muscular issues he was carrying in his neck) causes him to go on lock down? Ben thinks that what I’m seeing is Marty repressing that flight habit, and is him trying really, really hard to be a good mule. I feel that in order to conquer our haltering problems once and for all, the cause of this specific issue is what needs to be understood.

There are a few things I can play with. Rather than prompting him to accept his treat once haltered, I can wait and see exactly how long he remains closed off for. If he releases the barrier himself without input from me, will he still move off calmly afterwards? I could try asking him tip his nose a little before I’ve done the halter up, and see what the reaction is. I could also pay acute attention to where he starts to freeze up/shut down and then pause until he offers a change.

The important thing to remember is to take any reaction he gives me as information, and not allow my emotions to get too drawn into his.

Mule is a goon. 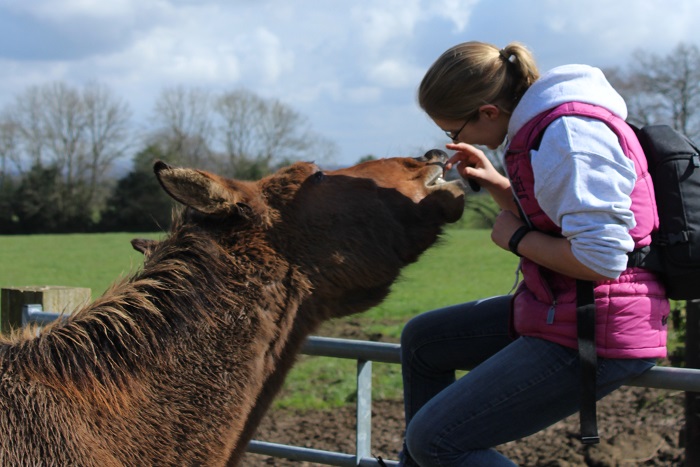