Xato and I first crossed paths six months ago when my friend, Sarah Weston, sent me an old copy of the IH magazine. It contained an article about her friend Xanthe, the Mule Lady of Mallorca, and Sarah thought I would be interested in reading it.

Anyway, in the article Xanthe spoke about her homebred john, Xato (pronounced Chatto. How many of you have been wondering about that one?). He was out of a Comtois mare and, I later learned, was something of a miracle baby; when Xanthe bought the mare, Jeca, she had been heavily in foal. Sadly Jeca lost the baby before making her journey from France to Mallorca. This was not the first foal she had lost, so when the owner rang to say that he had included a “surprise”, Xanthe did not expect to end up with a foal. But Xato, sired by a Catalan jack, defied the odds and became the first mule to be born on Mallorca in several years. Because of this the local farmers decided that he had to be baptised in celebration, and so he was! He has also taken part in the traditional end of harvest benediction, where the horses and mules are taken down to the sea to be blessed. 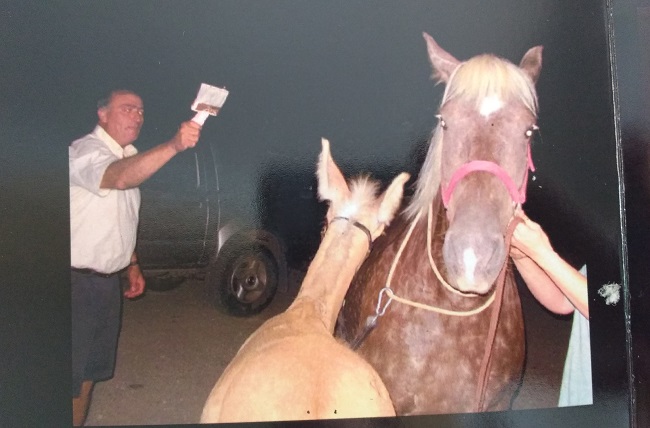 A photo of a photo of Xato being baptised.

All this means that Xato is a very good Christian mule. Marty and I are total heathens so I hope he will be a good influence on us.

Although Xanthe spoke about several mules in her article, there was something about Xato that just stuck with me. I’ve mentioned before that draught horses were my first love, and the idea of a draught mule was just perfection to me. I daydreamed about what it would be like to own such a magnificent creature, and decided that one day I would own a mule like him.

This was all just a fantasy until about a month before Marty was due to go to Anna’s. Xanthe, with whom I had become friends by that time, asked me if I would like to rehome her beloved Xato. I was floored. Due to a change in circumstances Xato needed a new home, and Sarah had put in a good word for me (I’ll pay you later, alright, Sarah? It will be in ginger biscuits because we know who’s really in charge). I had to pinch myself to check that I wasn’t dreaming (my latest dream involved me flying Marty out to America in order to ride a clinic in a literal cloud city, alongside Draco Malfoy and other fictional villains. My dreams are pretty weird but being offered Xato seemed just too far fetched). 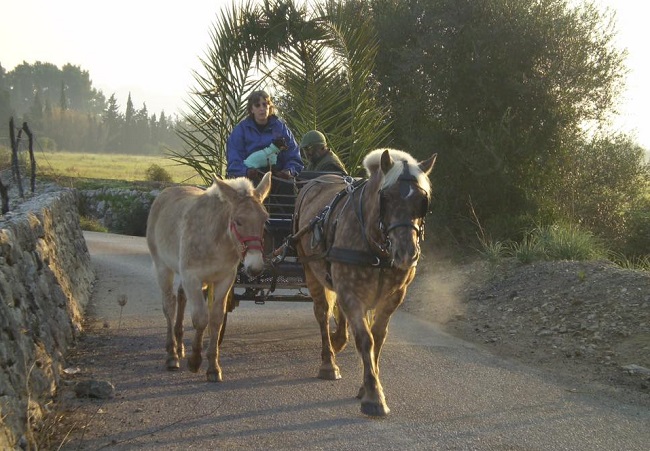 Xato is green when it comes to riding but he has seen and done many things, which appealed to me. Very different from Marty! He was attached to the shafts of his mother’s cart from 6 months old and has seen a lot of life.

I ummed and aahed, fretted and worried, and then eventually, with a sinking heart, told Xanthe that I could not accept her offer because I did not know what was going to happen with Marty. At that point I was already thinking of rehoming him, but I wanted to go through with the training and see where that found us. Amazingly, wonderfully, unbelievably, Xanthe replied that Xato was oki where he was for now and that she was happy to hold on to him until after Marty’s training.

It was really far more than I deserved and I can not possibly thank Xanthe enough for giving me this opportunity. Being offered the chance to be Xato’s guardian has been the highest honour I’ve ever been afforded (oh, apart from that time Ben asked me to marry him. Obviously. Ahem). 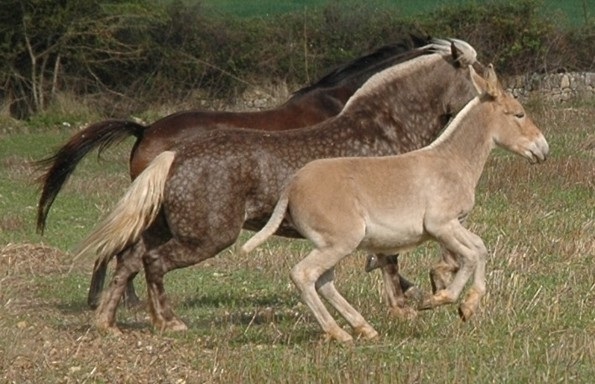 The three import stories I have covered for Mule Tales helped me a lot, and I decided that it was definitely worth the cost of a flight in order to go out and visit Xato before I made a final decision. Having booked the flight I was in a frenzy of nerves and excitement as I silently counted down the days – I kept quiet about the trip for fear of jinxing it! I was also aware that it may not be kindly looked upon to have me frothing excitedly about one mule while deciding to part with another. Under normal circumstances I would not have started looking for another mule before I had Marty’s future fully sorted, but this was one opportunity I knew I could not afford to pass by. I have owned, loaned and fostered many equines and I have not explicitly gone looking for any of them; they have all found their way to me, including Marty, and my life has always been vastly improved because of them. Call me a hippy, but I feel that people and animals arrive in our lives for a reason, and that if you feel that connection with them then you must definitely pursue it.

I will break here and continue the Xato chapter next week, as I fear this will become far too long if I don’t… 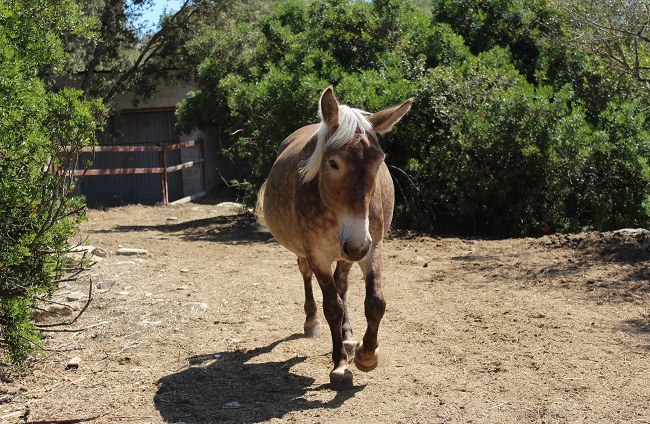 Xato as he is now.