Well … mule was catchable today. He walked away from me at first and, when I stuck with him, he pinned his ears and scurried off to hide behind Iris. I asked Iris to move aside, which she did, and then mule approached me and let me put his halter on without issue. Funny little guy.

I wasn’t entirely sure what to do next, so I just gave him lots of scratchies, hand-grazed him, and took him on a little walk round the property. I led him through the building site because it meant that we had to bend round and clamber over great piles of sand and rubber shreddings, and there is nothing that mule likes better than climbing things. If we’re out and about, he always has to scramble up banks and balance in precarious places. I was very proud of him, actually, as he followed me through there without hesitation – despite the fact that in some places the footing was deceiving and he ended up fetlock-deep.

We had a bit of trouble when it came to taking the halter off, as he was very twitchy and didn’t like me touching the halter/moving the halter/putting my hand near his head. I know for a fact that he has never been abused, and yet he sometimes reacts like an animal who is expecting a beating. Kind of embarrassing, mulo! So I did a little bit of work getting him comfortable (again) with me bringing my hand up, then moving the halter, then scratching the halter with my fingernails/rubbing the rope against itself (he is so sensitive to sound; things that are touching him and making noise really bother him). After that I was able to undo the halter, no problem.

I gave them all some hay while I poo-picked the field (because otherwise mule just follows me around, pestering me for scratchies, and I get no work done), and every time I glanced his way his eyes and ears were firmly fixed on me. Of course, I don’t know whether that’s because he likes me, or because he was just keeping an eye on me as a potential predator. I would like to think it’s the former. After all, when I went to empty the barrow he followed me to the fence, waited for me, and then whickered to me when I came back! Yehhhh, I got the warm ‘n’ fuzzies.

I don’t know where I am with that mule half the time. I guess I can’t be all that bad, else he wouldn’t have let me catch him at all. But what had upset him so much yesterday? Was it just an off day? Did I offend him? Did I offend him three weeks ago and he’s spent all this time mulling it over before coming to the conclusion that I am a Bad Egg and must be punished? I think he just likes to play with my heart on purpose. He is a boy, after all.

Mule says he doesn’t care, as long as I feed him. 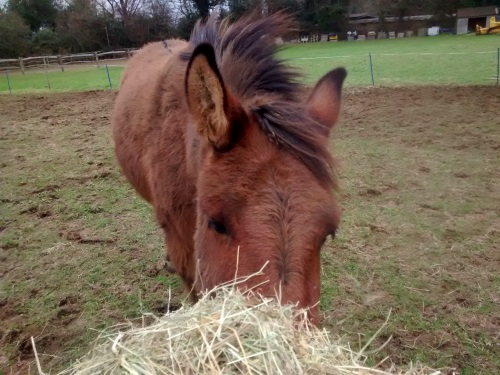