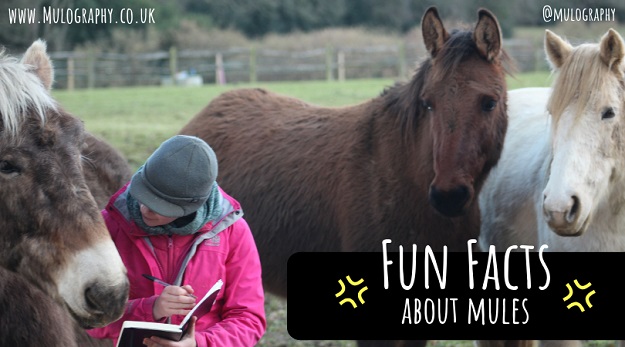 I went to a quiz night a few months ago with a team from work, and was bitterly disappointed when not a single question involved mules – it would, after all, have been the only possible contribution I could have made. Ever the optimist, I have decided that maybe someone else will one day attend a quiz containing obscure questions about mules, and have therefore gathered together a selection of mule facts for your delectation. You can Google the same repetitive fact sheets across many sites, so my aim here has been to collate interesting tidbits which, I’m fairly confident, will contain at least one thing you didn’t know…

Like most hybrids, mules are almost always sterile. However, there have been a few recorded cases of mules giving birth. A fertile mule can give birth to either a horse, a donkey, or another mule. The reason for this has been explained to me fifty thousand times but I am not smart enough to even begin to understand it.

Mules smell different to horses, and although they’re not hypoallergenic some people who are allergic to horses are not allergic to mules.

Some mules may have smaller nasal passages compared to a horse of equivalent size – Xato is one of them! Despite being a draft mule, his nasolacrimal ducts are so small that, when he was being treated for conjunctivitis, the vet had to use cat catheters for one and was unable to find the opening for the other at all. The nasal end of the nasolacrimal ducts are also positioned differently in a mule than in a horse.

The ancient Assyrian Empire had a communications network – the first of its kind in the world – that saw its riders mounted only on mules. Mules were more expensive than horses and each rider travelled with two mules, so it was a costly endeavour and shows how highly the mule was regarded.

The earliest record of the mule in Britain is a 2nd century jawbone discovered in London. The under side of the jaw exhibits pressure atrophy, suggesting that the mule suffered poor treatment from a too tight halter.

Bartholomaeus Anglicus, a 13th century Franciscan monk, claimed that mule dung was a great remedy for scorpion stings. However, the 12th century Saint Hildegard had little interest in the mule as she considered them to have no medicinal value – although she did think them to be a “cold, strong, fearless” creature.

Mules were considered to be excellent mounts amongst medieval European aristocracy; Cosimo de’ Medici (14th century) is known to have ridden a favoured brown mule, and Cardinal Wolsey (16th century) rode a white mule – which was a popular colour of mule for the ecclesiastical class, including the Pope. It is interesting to me that the white mule is clearly a very old symbol; see the next section on Religion and Mythology.

In the US coal mines, mules were often favoured over horses due to their agility – a mule could turn around in a tight tunnel, duck under low beams, and were even known to crawl through holes following cave-ins.

Mullo is a Celtic god about whom little is known. The Romans called him Mars Mullo, and it is believed that – among other things – he was the god of mules, although there is no real evidence to support this other than his name. Of particular interest to me / this blog is that the Corpus Inscriptionum Latinarum seems to suggest that Mullo is a byname for … Marti. My mule’s behavioural problems are probably because he’s an ancient god trapped in mortal form. Hate it when that happens!

The prophet Muhammad rode a favoured white mule named Duldul who aided him in many battles. A legend from Kurdistan tells how she once carried him to safety up a sheer cliff face, and her hoofprints in the rock can still be seen to this day.

Folklore from the Muslim Hui people: Muhammad, pursued by enemies, appealed to a mule for help who ignored his plight. Instead, a nearby horse dug a trench for Muhammad to get in and then lay across it, pretending to rest while the enemies rushed by. In gratitude, Muhammad promised that horses could rest their hooves when they are tired, and that is why horses often rest a hind leg while stationary. To punish the mule, Muhammad proclaimed that mules would not be able to give birth – and that is why they are sterile.

Palden Lahmo, a Dharmapala (wrathful diety) of Tibetan Buddhism, is often depicted riding sidesaddle on a white mule across a sea of blood. The mule has an eye on its hindquarters, created after Palden Lahmo healed an arrow wound in its rump.

Zhang Guolao, one of the eight immortals in the Taoist pantheon, has a magical white mule which he can fold up like paper and keep in his pocket. When he requires the mule again, he only has to pour water on it for it to regain its proper form.

In the 17th century, Edward Topsell believed that the allocamelus – an animal with the body of a camel and the head of a donkey – was the offspring of a camel and a mule. This fantastic beast was probably more likely to have been a llama or alpaca.

A “three bell mule” is one who packs, rides, and drives. The name is derived from the custom of trimming the top of the mule’s tail into bell shapes for each corresponding skill.

In the twenty mule team famous for pulling the Borax wagons, the pair closet to the wagon are called the wheelers; the next three pairs are the pointers, who are the ones trained to jump the chain in order to turn the massive wagon; the next five pairs are the swing; and the two up front are the leaders.

In 2003, a mule was the first equine to be cloned. Idaho Gem was produced with DNA from a fetus that would have been brother to Taz, a champion racing mule.