Yesterday wasn’t a working day for the mule, but I caught and haltered him in the morning so that I could give them all some grass. He was perfect. He started to walk towards the gate as soon as he saw me arrive, presented me with his left side and seemed to be in a very cheerful, happy-to-see-me mood.

This morning, after waking and finding that it had snowed in the night, Ben and I arrived at the yard to discover that both the horses had escaped and were cheerfully pigging out in the big field. The mule, however, had remained in their paddock. I’d like to say this was because he is a good boy, but I think it has more to do with him having a very high level of respect for the electric fence – even when it’s lying on the ground. We don’t know quite what had transpired during the night, because although the fence wasn’t damaged (it had just been brought down), Iris is sporting symmetrical scrapes down her hamstrings and hocks and has also ripped a hole in her rug’s tail flap. Poor curiously injured mare.

The mule was in quite a state of anxiety when I reached him, and he was really very reluctant to have his halter on. Although there was no running away or pulling back this time, I had to go through his fear of having his poll/neck/mane touched again. Given that yesterday there was no reaction at all to me touching that area, I’m wondering if it is an automatic response. He is genuinely frightened but not, I think, of actually having his poll touched. Perhaps it is slightly concerning to him, but I suspect that he falls back on this behaviour and exaggerates it when he’s stressed or anxious about other things.

Anyway, we took him for a wander round the Punchbowl. He was more forward going this time, but still fairly anxious. At one point, I took him up onto a bank to let some dog walkers pass. When I asked him to walk on, he tried to come down the bank behind me so I gave him a fairly sharp “no” by flicking the rope with my wrist … and he responded by striking at me with his foreleg. I immediately asked for back up, re positioned myself so that my right hand was nearest his head and my left was free to use the tail of the rope to keep him out of my space, and asked him to come down properly this time. Which he did. I don’t believe the strike was meant for me: he was fixated on the dogs, and I think his brain was with them rather than with what I was doing. When I abruptly told him no, he was still thinking about the scary dogs and what they might do to him, and the strike was self-preservation. He seemed as shocked by his response as I was. 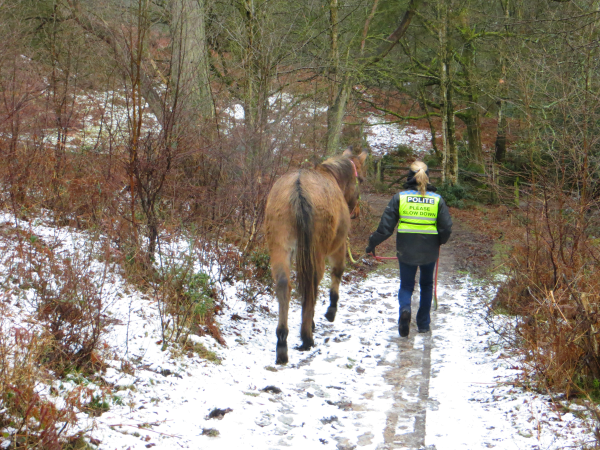 The next hazard we encountered were the herd of feral Exmoor ponies, who were encamped among the gorse bushes a few metres from the path. It goes to show how good their primitive colouring is, because I didn’t see them at all – the mule noticed them first, and I only realised they were there because I saw the white bum of the old grey pony who runs with them! Once I saw him, I was able to look closely and see the others. The mule was a bit goggle eyed about this, so I asked him to turn his back on them and keep moving. He was a bit wiggly for the first couple of strides, but settled down very quickly. I’ve found that, with him, there is a delicate balance when it comes to dealing with potential hazards: let him look, but don’t let him look too long. Knowing how to handle this gets easier and easier the more time I spend with him.

“But muu-uuum, I want to go and play with the wiiiild ponies! Ben! Tell her!” 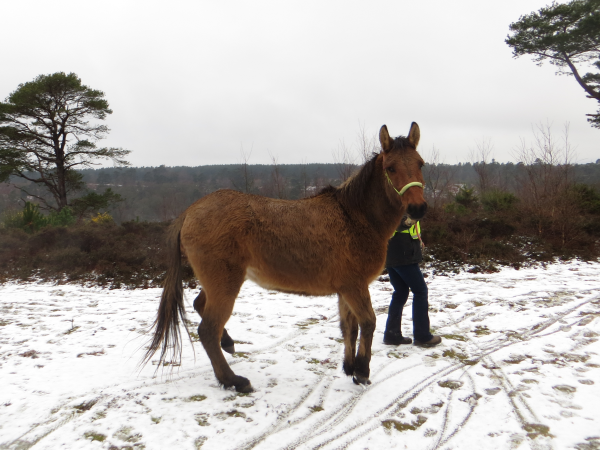 The next thing was when he was spooked by a cyclist. The track was very uneven, and we’d stopped to let the cyclist pass. Unfortunately, the guy wanted to cycle on the bit we were standing on, and instead of stopping to let us pass, he suddenly veered towards us. As far as the mule was concerned this was a deliberate attempt on his life, and he slammed his forefeet into the ground and rocked backwards. I put my hand on his shoulder, and he stayed where he was. I’m not quite sure what happened there: did he realise that the cyclist wasn’t actually coming for him after all, or was me touching him enough to change his thought and give him a chance to re-evaluate the situation? Either way, I was very pleased with him. It was certainly a better response than striking!

Not quite a winter wonderland, but it’s the best we’ve had so far. 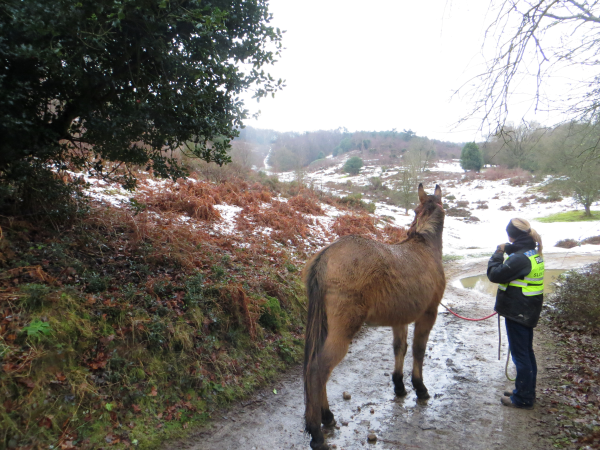