I just want to preface this by saying how thankful I am that I live in an area with access to such fantastic equine professionals. Our EP, Emma Burston, is second to none; Stacey Bevan has introduced me to a whole new world that I’m only just beginning to understand; Monica Andréewitch generously gave her time to teach me some invaluable skills; and today the brilliant Bee May gave Marty his first dental exam.

This dentist appointment is something I have been dreading for nearly a year. Marty was initially booked in to have it last summer, but I cancelled after losing my childhood pony to colic a week before the visit. I knew Marty would need sedating, and as mules have a slightly higher risk of colicing after sedation, I imagined the worst and chickened out.

Of course, practically – and if I was to call myself any kind of responsible owner – I could not ignore it forever. So Ben and I made an appointment with Bee, booked a vet to administer the sedation, and I tried to stop worrying about potential scenarios.

There was a stand for him to rest his head on, but he wasn’t quuiiite asleep enough for that! 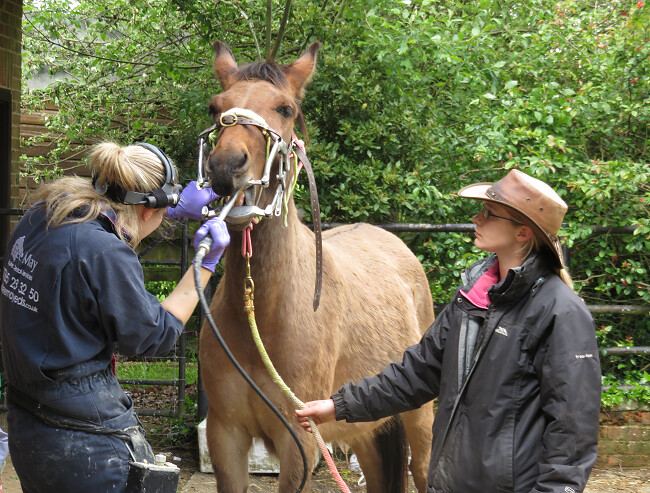 As the vet was running a little late, Cash and Iris were done first and I brought Marty on to the yard while Bee was still working on Cash. After an initial hesitation when he first heard the sound of the electronic tools, Marty’s naturally inquisitive nature took over and in the end I had to physically stop him entering the stable and poking his nose into the horses’ mouths. Mules are capable of observational learning, so I made sure that he got a good look at what was going on and allowed him to go up and touch the tools and paraphernalia – so long as he wasn’t getting in the way by doing so! I was also really pleased with his immediate approval of Bee; he is often wary of strangers, but he was perfectly happy to let Bee touch him and was very interested in touching her, too. As I’ve said before, a mule’s approval counts for a lot.

Marty’s second Big Boy Pants moment occurred when the vet arrived to sedate him. The initial dosage was pretty low and, when it became clear that it wouldn’t be enough to get the gag on, he had to have a little top-up. Unfortunately, Marty now knew what the game was and did not stand so nicely to have a needle stuck in his neck for a second time! There was a slightly worrying moment when an artery got struck by accident, but everyone remained calm and Marty didn’t appear to notice.

For anyone who hasn’t seen a horse (or mule) having their teeth done before, although it looks like some kind of medieval torture it doesn’t harm them at all. Marty only had sedation because it was his first time. 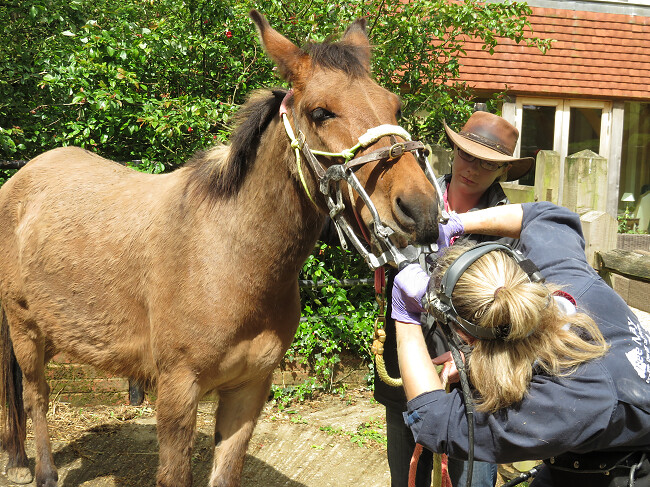 Sedation acquired, Bee was able to begin. It turns out that Marty has a pretty perfect mouth, apart from a wolf tooth which I decided not to have removed as I’m not planning on bitting him anyway. It’s not uncomfortable for him. He still has a couple of teeth coming through, which is pretty adorable. I sometimes forget that mules don’t mature as quickly as horses, and that five-years-old is still quite a baby! As well as the teething, he’s also shed some caps fairly recently. All of this makes for quite a sore mouth, so it will be interesting to see if there’s any change in his behaviour.

He’s a sweetie. I may have just subjected him to some very weird things, but he hasn’t entirely disowned me. 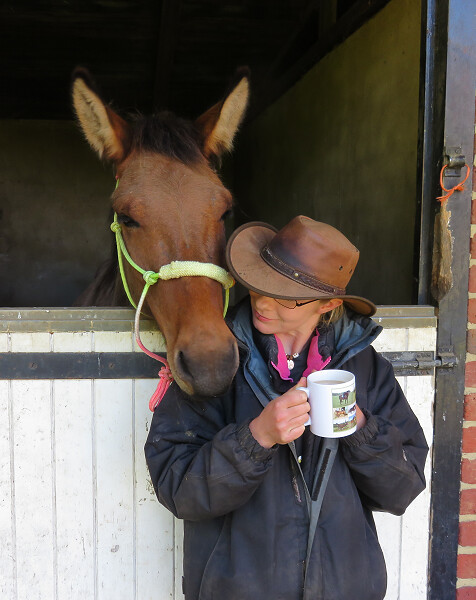 I’d been worried that he might be really naughty to inject and to have his teeth done, but – as is often the way – it was absolutely fine. In fact, the most difficult part of the day was the four hour wait we had before he was allowed to eat! He spent the first two hours in the stable, but as he was quite perky by the time Bee finished (he hadn’t had a lot of sedative at all; both Bee and the vet suggested that we may be able to do him without next time, as he was so good) I didn’t want to leave him unless he decided to jump out. 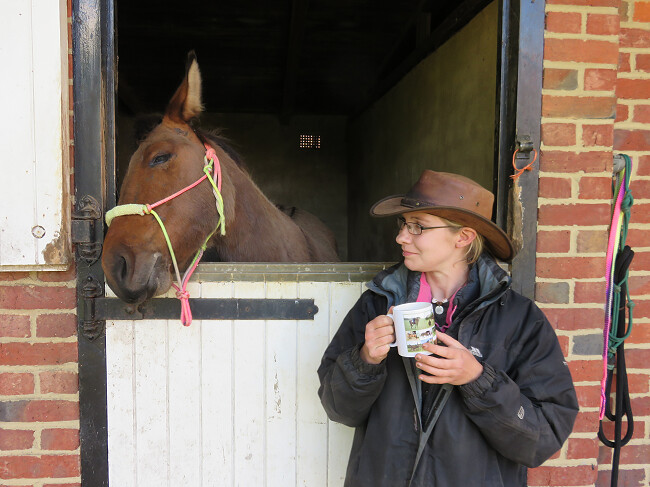 It was actually pretty good education for him, as he had to learn that the world doesn’t revolve around Marty after all. Once I’d firmly explained that he couldn’t rush at the door and pin his ears at me, he settled down and was perfectly polite. I took him out a couple of times to let him speak to Iris, who was stabled next door, and to stretch his legs. To be perfectly honest I think the sedation was well out of his system after the first hour, but I wasn’t taking any chances!

Ben nipped home to fetch me some tea, and found that the post had arrived; Marty made the front cover of The Mule (the journal of the British Mule Society)! He was very pleased. 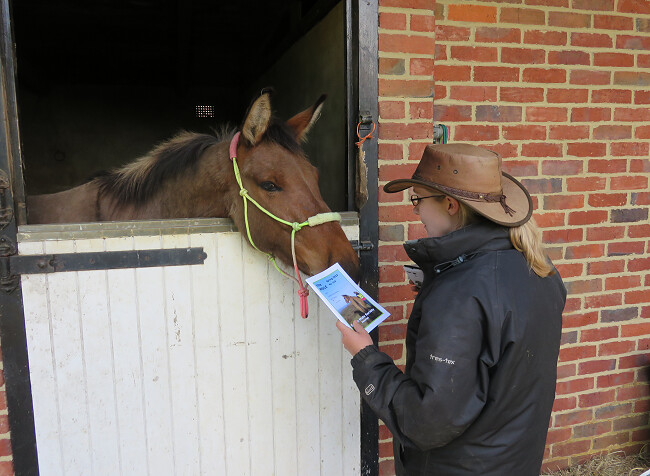 He and I both have articles in there and he was interested to hear what everyone else had to say, too. 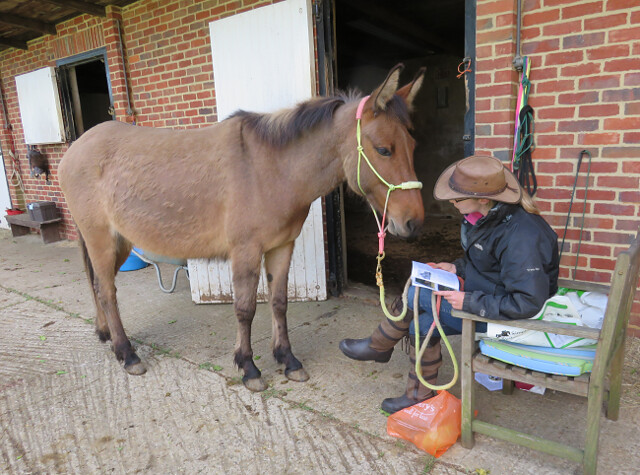 We turned him out at the end of his fast, and went back a few hours later just to make sure that he was definitely alright. I also wanted to catch him again, as I felt it was important – given his catching history – to just put a halter on him, treat him, and let him go again without making any demands. He ran out backwards when I initially haltered him, but stood after that. I caught him twice and gave him scratchies and a treat both times and we parted on good terms.

I’m very proud of him! Given how good he is with his feet now, our next goal is to be able to have his teeth done without sedation. I’m fairly confident that we’ll get there because he tries so hard.

Cash used to have sedation, too. He’s a brave pony now. 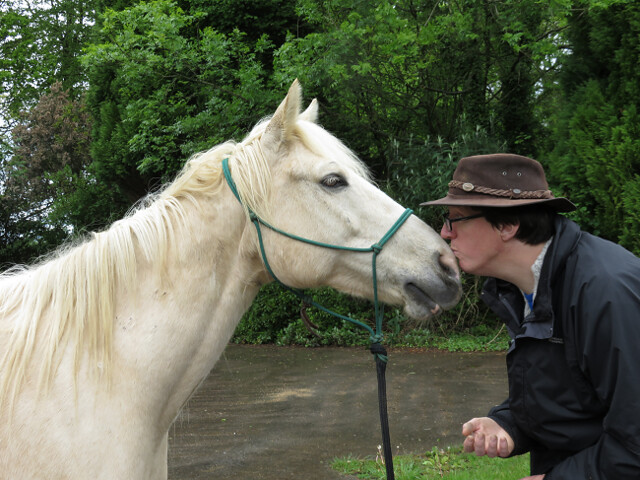 Before I go, there is one person who I left out of my opening commendations: Ben, the most important of all the people who’ve helped me. Now, as his fiance I am obviously and terribly biased, but he is a fantastic horseman and I am unbelievably privileged to be able to call on his expertise whenever I’m in need (which, let’s face it, is pretty much all the time).Without him, Marty and I would not be where we are today. Without him, we would no longer be a partnership at all.

So thank you to everyone who’s leant me their expertise over the past 13 months, and thank you to Marty for being the best mule a girl could have.