A friend of mine suggested that Marty’s reluctance to be caught could be due to headaches. Headaches in equines is something I must admit I’d never considered, but I did some research and the symptoms include: being averse or hyper-reactive to touch, hyperactivity, elevated head posture, difficulty to halter, skittish or spooky, tight mouth/jaw. Sounds familiar, doesn’t it?

Of course, this is not a definite verdict. From what I understand it’s not an easy thing to diagnose, and if the reason is not immediately obvious we just need to work to eliminate  as many possible causes as we can and see if that makes any difference to his behaviour. The high, tense head posture, the tight mouth and the hyperactivity (his galloping around, spinning, instigating the horses to run/fight) are all responses to being anxious or frustrated and may not be symptoms of pain at all. But it seems foolish not to explore this avenue. 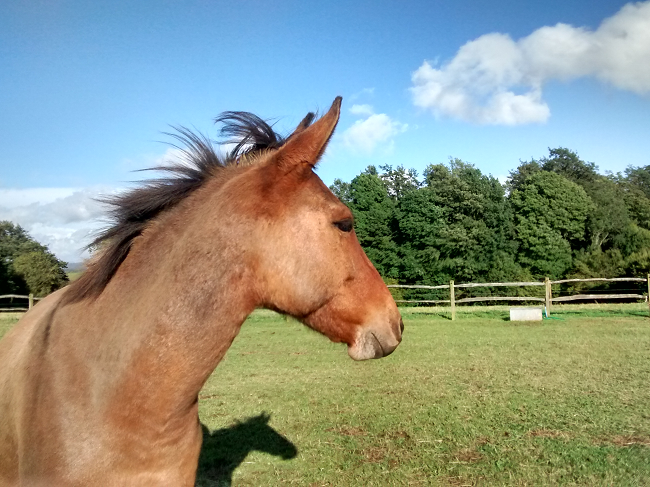 As he is at his worst during rainy weather, it could be that he is very sensitive to changes in air pressure. We’ve had a lot of rain lately, and currently I’m just accepting that I will not be able to catch him on wet days without a lot of aggravation. Instead, when it’s wet I’ve been working on simply being able to stand by his left shoulder (he is usually very keen to keep me in his right eye). Initially this required a little dancing, as I would approach and retreat until I could stand in my desired position, and then would be able to progress to standing and touching/stroking him at the same time. Today, although he began by putting me on his right, I just moved round and was able to stand at his shoulder and rub his neck right away. My next step is to be able to do this while holding a rope, then to be able to put a rope round his neck, and eventually a halter. However, he leads well with just a neck rope as I have used it in the past, so that is my main aim for now.

Today was rain all day, so we just hung out and had scratchy sessions instead. 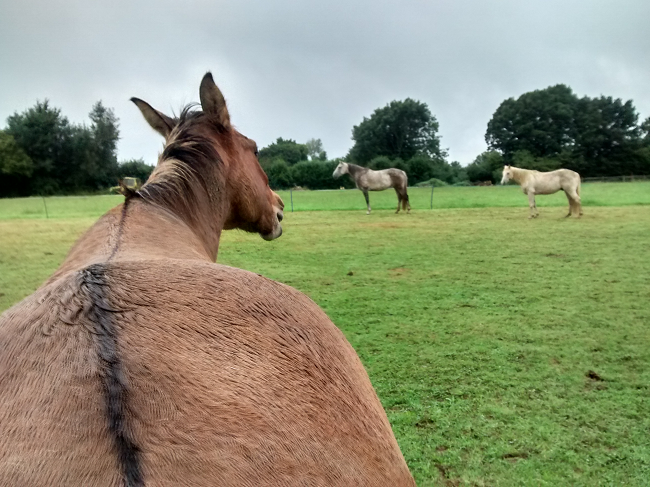 Potential remedies involve a chiropractic session or cranial sacral therapy, in case the headaches are caused by a misalignment. I have seen the latter used before and it is a fascinating treatment. I feel like it might also be something that we’d have more success with, given how much Marty dislikes being touched by people he doesn’t know (and sometimes by people he does). I may also need to dust off my TTouch skills and see if that helps him. Another possible cause is TMJ, although as he has recently had his teeth done.

In other adventures, we took Marty out for a short walk at the weekend. He was in an exceptionally anxious mood so I handed over to Ben and we spent some time just walking up and down a short section of lane, working on making sure that Marty was tuned in to his handler. It wasn’t long before he was visibly relaxing, and by the time we took him home he was strolling along without a care in the world.

Ben and Marty on the lane. 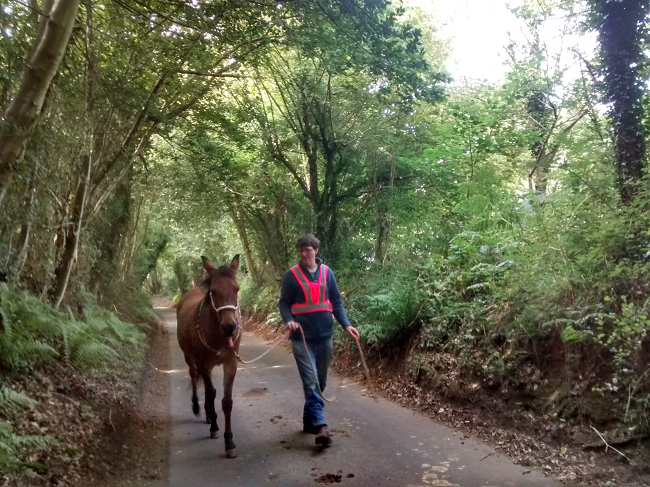 We also had a very good dog session. While checking out the entrance of a cul-de-sac that had been bothering Marty (he’d seen a cat there at the beginning of his walk), a lady came out of her house leading two dogs. The smallest one started barking, and the lady apologised and offered to take them back into the house as she could see that Marty was alarmed. Ben explained that it was actually very good experience for Marty, so she stayed where she was and we brought Marty to her. I want to say how brilliant this lady was, because she then offered me the lead of her big, quiet dog – a gorgeous Saluki cross – and said that I could introduce him to Marty. This was so thoughtful of her! Marty was fascinated by this turn of events and came right up to us, but I asked Ben to keep a distance as I didn’t want to risk the dog being hurt if Marty decided to strike. He’s never attacked a dog, but it’s not something I want to test!

Things like bins aren’t usually a concern to him, but when he’s in an anxious mood anything is a potential threat so we allowed him to stop and check them out as he was side-eyeing them when we passed. 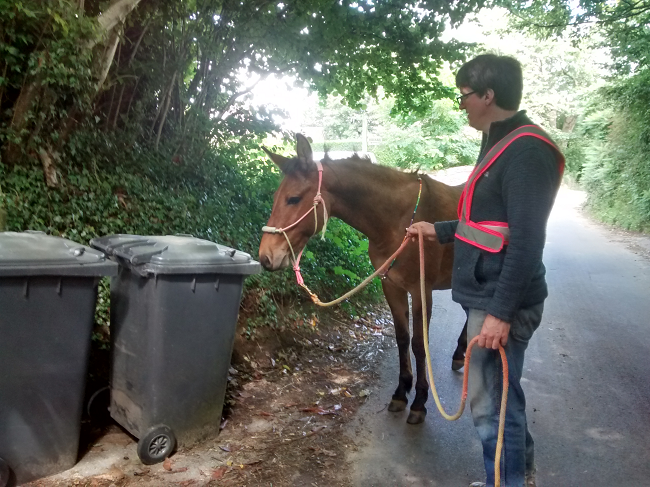 Earlier in the week I’d done a little work with him and the yard owner’s young Labrador, who came into the yard and started barking at us while I was grooming Marty. In response, I led him over to her to show him that he could move her if he needed to. She ran and hid on the other side of the fence and then continued to bark, so I asked Marty to approach and gave him a treat when he did so. I did this a couple of times before deciding that he’d understood there was nothing to be afraid of … Marty, however, wanted more treats. So after thinking about it for a moment, he stepped towards the dog again and then turned to me expectantly! He is very resourceful when it comes to getting treats. I don’t mind, because he’s not nippy or bargy about getting them – he’s always trying to think what he has to do to earn them. And if he’s able to think like that when faced with an obnoxious pup, then it suggests to me that dogs are perhaps no longer as big a threat to him as he first thought.

Taking a break for scratchies! 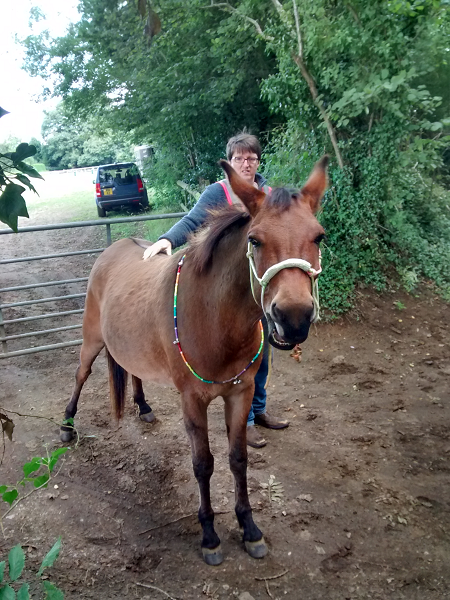