This past week, I’ve mostly been working on liberty stuff with the mule – hanging out with him, being friends, and asking him to walk with me around the paddock. This is something we’ve done before, although he was always wearing a halter at the time. I think having the halter on helped us then, because as far as he was concerned he was on the job and saw no difference between following me if the leadrope was in my hands or looped over his neck.

Persuading him to walk with me when he’s completely loose in the field was a little more difficult, although once he got the idea we did pretty well.

On our last session, Stacey had suggested that I forget the halter completely. She said to roll up a leadrope and rub him all over, and then progress to looping it around his neck and using that to lead him with. In my arrogance, I thought this seemed a fairly pointless thing to do – he wasn’t a unhandled baby, after all, and what was the use of getting him to lead via a rope round his neck? I still couldn’t (safely) take him out of the paddock, or hold him for things that I knew he’d object to (such as worming).

So I’d gone out and tried to catch him with his halter and failed spectacularly.

Vastly humbled, it was then that I stopped thinking about what I wanted, and started thinking more about what he wanted. If he needs me to take a step back and start over with baby stuff for him, then I can do that. I know a lot of people would think me pretty useless because of this, but I’m not about to push him and force him and end up with an unstable foundation. I want all this basic stuff to be solid before I even think about getting on his back.

Today I finally took out a rope and tried what Stacey had suggested I do a week ago. He was not keen on being touched with the rope to begin with, but although he tensed and backed off, he didn’t leave and I was soon able to rub the coiled rope all over him.

He was fine with me putting it around his neck, and stepped forward after I applied some gentle pressure. At that point he became anxious and ran backwards, like he does when the halter is being put on, but I stayed with him and he listened to me and stopped. I could actually see him make that decision to stick with me, and it was a pretty amazing feeling – he could easily have kept going and left completely. My rope wouldn’t have stopped him!

Moving into pressure to start with. 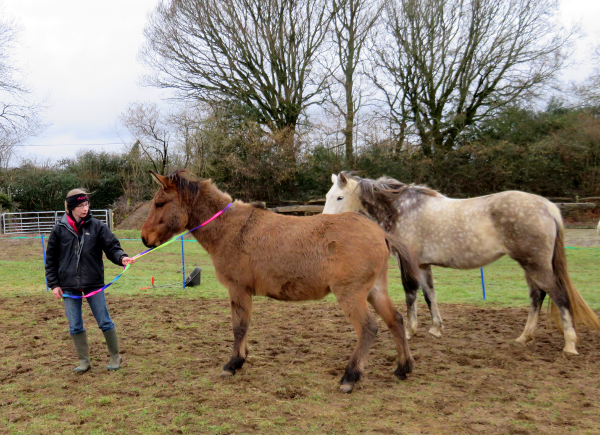 I ‘caught’ and led him around three times, and although he remained a little tense, by the end he was leading well and walking quietly alongside me.

I guess this probably doesn’t count as a victory, considering he is halter broke and really shouldn’t need to regress to ropes-round-the-neck, but it feels like a victory to me. At the moment, any time with him that doesn’t involve grumpy ears or a swiftly vanishing backside is pretty much Best Day Ever as far as I’m concerned! 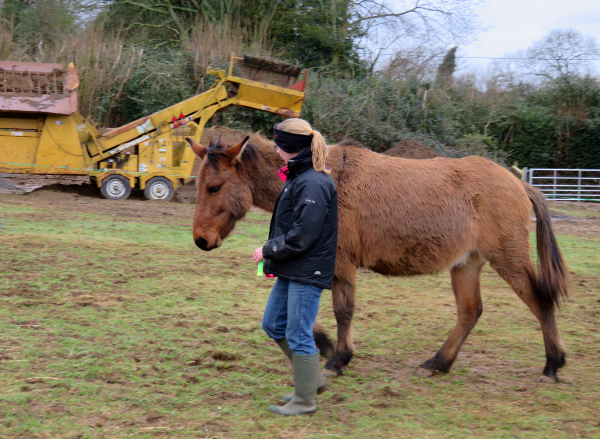 On our final walk. He’s much more relaxed, but you can see he’s still bending away from me slightly. 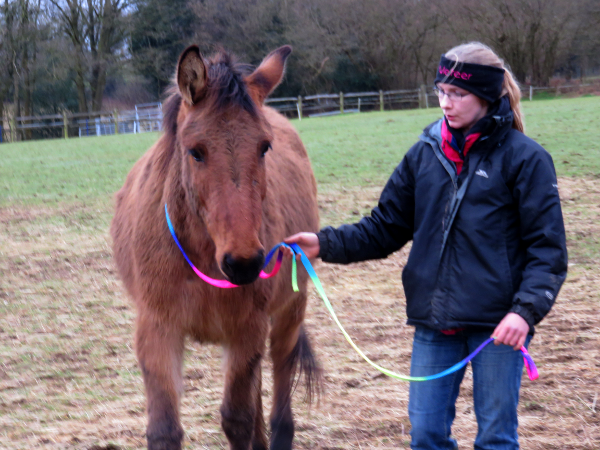 This was quite interesting. The boys were both vying for my attention when Cash got a bit carried away and bit my wrist. Before I had time to react, the mule retaliated on my behalf and bit Cash on the nose. Check out his expression here, immediately afterwards! 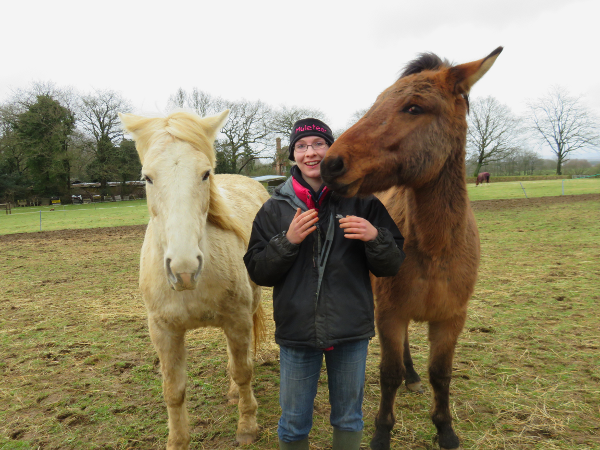