Although I’m always dealing with varying degrees of a sore back (I have lordosis in my lower spine and mild scoliosis in my upper spine, because I am a very greedy person), my body appears to be making the most of being unable to work the mule by attempting to cripple me at the moment. So I couldn’t take him out for a walk even if I could catch him; silver lining, see?! I’ve also been completely felled by what I can only assume is man flu, and after sleeping all morning (during which I dreamed a vet had come out to give Marty some injections and I told her I didn’t believe in God and then she went all crazy robot vet on me and mule and I had to flee from her fluorescent green syringes), I lay there thinking about the mule (a common occurrence) and decided to go back through my private journal and see if I could come up with some kind of time line.

This is something I probably should have done earlier, but it’s only when you realise you’ve been struggling with a problem for over two months that you start to look closer for anything, anything, that may have triggered it.

Beginning on approx 17th November, 2014, I start having those familiar catching problems with Marty. He will approach with pricked ears and friendly demeanor if I’m not carrying a halter, but any attempt to catch him results in flattened ears and the sight of his disappearing backside. However, I am still able to catch him – it just takes longer. This continues until he and the horses are moved to their larger winter field on November 25th; the next day, he is perfect to catch.

Things that happened immediately prior to this reluctance to be caught:
1. I took him for his first off-property walk in 2 weeks, to the common and back, with Ben for company as I wasn’t feeling very confident (did he pick up on that?). He was fine and the walk went without incident. In fact, there was a point where he jumped a large muddy section and landed well ahead of me – but the instant he felt his rope become taught, he stopped immediately and waited for me to catch up.
2. I’d been attempting to introduce him to wearing a rug, which had failed, so I’d taken a step back and started out by introducing him to wearing a light, non-jingly, fleece blanket instead; this was entirely successful.
3. During this period I’m also working incredibly hard to give him as much time as possible despite my work schedule and the short daylight hours – this meant that I was often skipping my lunch break (the only downtime I had on what were often 12 hour days) in order to walk, work or just hang out with him.

Oh, wait – problem solved. It was the Hello Kitty blanket, wasn’t it? 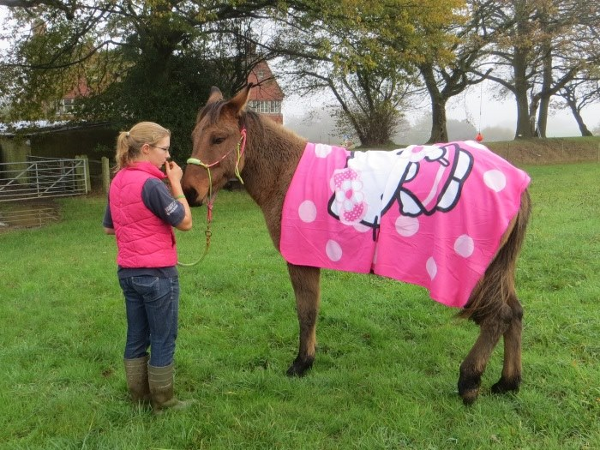 I’m only mentioning the last point because, although I genuinely enjoyed (and still enjoy!) spending time with him, I have wondered if he picked up that we were on a limited time slot. Did it make him feel rushed? Or less important? Did he sense my exhaustion and stress even if I didn’t?

November 27th was when we first encountered problems about leaving the property – not after the loose horse incident, as I thought. This is the day it all starts. He had been difficult to catch, had then seemed unnecessarily frightened by a strange man appearing on the yard, and our walk had consisted of him spooking at everything (very unusual for him), planting himself constantly, and overall acting very anxious. I was firm but gentle, but perhaps forcing him to go through with things that were obviously bothering him is where our relationship begins to fray? When Stacey first met him and I said there’d been an incident (I was referring to the loose horse), she asked if it had involved a person and had seemed very puzzled when I said it had not. We eventually decided that the person must have been me, but what if it was this man? He did nothing to us, didn’t even interact with us, but I recall now how strongly Marty reacted to the sight of him.

On November 29th I took Marty out in company for the first time. Previously to this, I’d only ever walked him out on his own – initially with Ben along on foot, then by myself as my confidence grew. This time Ben rode Iris. Three things we encountered on that outing: a cross country runner who ran up behind us and frightened the mule (I saw her coming and assumed she wouldn’t be daft enough to try and overtake an equine, at speed, on a very narrow downhill path – but she was!), a dog who tried to inspect Marty’s heels (and received a warning kick for its trouble), and Marty’s first encounter with the feral Exmoor ponies of the Punchbowl. He was extremely interested in them, but not anxious.

Ben and Iris got to the top of the hill before us because I was having too much fun taking scenic photos of my mule. 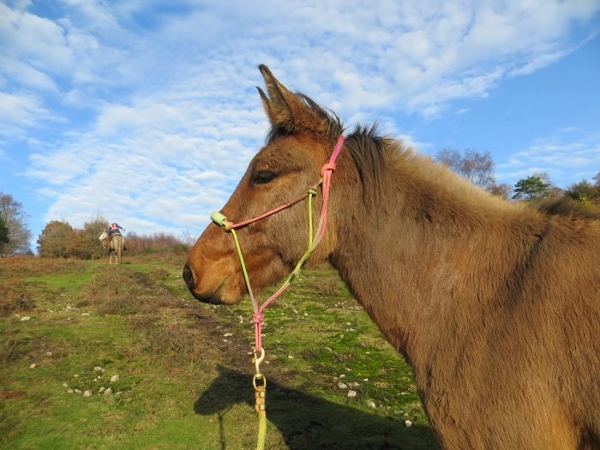 On December 4th, our catching problems started again and have not yet ceased.

We only went out with Ben and Iris twice; that first time, and again the following week which was when he was frightened by the pack of loose dogs. They didn’t touch him or even come that close to us, but Iris was very wound up (before the mule became worried), and he tried to run away when they came bounding through the bracken.

Now, I had this COMPLETELY skewed in my head, as I thought the loose dogs came after the loose horse; but we actually met the horse five days later, on another section of the same trail, on December 11th.

So. This is a more jumbled post than usual, as I have no conclusion to it at all (do I ever?). But the act of collecting all this information and even the process of writing it down here has sparked several thoughts and ideas that I now need to sift through.

In my sulkiness, I was beginning to think that of all these theories I’d concocted and tried to fix or accommodate, I should perhaps have just gone with the simplest explanation – maybe my mule is just naughty. But I don’t think that’s the case. That was how I used to think, before I found a mule to teach me. A horse is misbehaving; physical problems like tack or teeth have been checked and eliminated, so it must just be a naughty horse, right? It’s lazy and wants to get out of work, right? Sometimes I’d like to walk up to past me, give myself a good smack and say: use your stupid brain and think. There is always a reason to ask why. If he is ‘just’ being naughty – why is he being naughty?

I think my mule deserves an apology.