Time for some more interesting snippets of mule history! 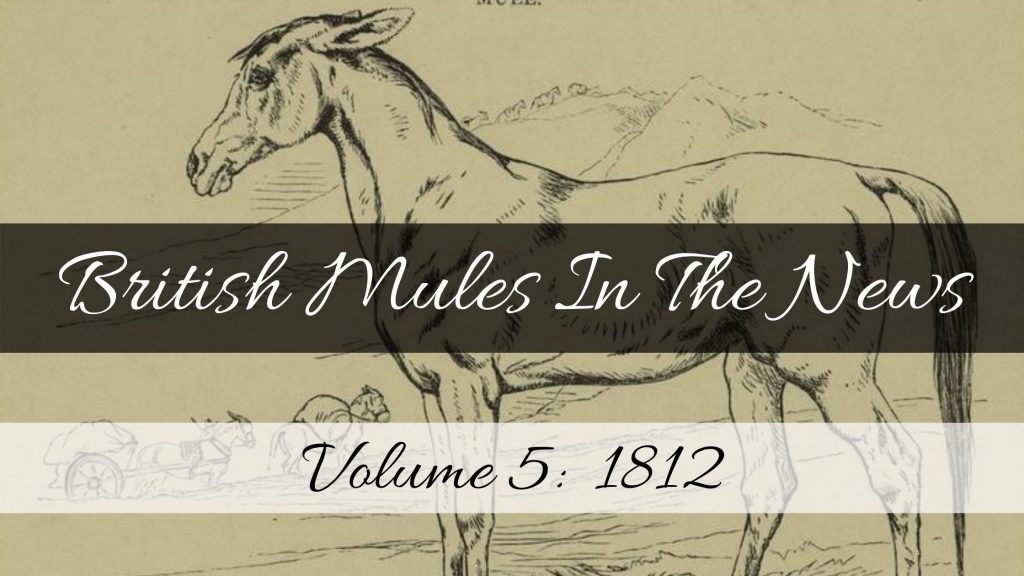 Wow – hardly any for the general section this time!

Tuesday, 31st December 1811
Chester Courant
From an article talking about agriculture in Wales: “Excepting the ass, and perhaps the mule, it is not clear that this extensive region would gain by introducing any new sorts of domestic animals; indeed the great want felt by the Welsh, is not that of animals, but that of food in winter and spring, for those which they possess.”

The article also says how surprising it is that the donkey hasn’t been introduced into general keeping in Wales, considering how useful they are and that they live “three times the usual life of a horse” (though this may be an exaggeration, as it later states the donkey can live to 60 or 70 whereas “the poney rarely lasts more than 12 or 14 years”). The author considers the donkey to be stronger and more sure-footed than even the Welsh pony, and that employing the use of donkeys on the mountain farms would be “peculiarly proper.” You can read my Welsh Mules In The News article to see that donkeys and mules did eventually make it here!

This is admittedly a somewhat tenuous link, but I really like field names and this one was interesting to me. Were mules employed by the iron works? Is this where they kept them, or was the name inherited from an earlier time? Is it nothing to do with our favourite long-eared mules at all?

Saturday, 29th August 1812
Northampton Mercury
An article announces “Goodman’s Patent Saddle-cloth, to prevent the saddle running forward without the use of a crupper.” It doesn’t say how the saddle-cloth works, but since it also prevents the saddle from sliding backwards or a sidesaddle from rocking, can be worn by a driving horse to avoid accidents caused by a crupper, and allows you to use loose girths (“a relief to the animal which must be obvious to everyone”), it sounds pretty good! The mule connection comes from this line: “It is peculiarly adapted for the East and West Indies, as it entirely prevents a saddle running forwards on any mule or beast of burden.”

Tuesday, 29th September 1812
Hull Packet
“A mule having been left fastened to a kedge anchor at the door of a blacksmith-shop, in Church-street, Whitby, took fright and galloped through the street, dragging the anchor after it. In its progress, the anchor caught the leg of a poor woman of the name of Green, which it dreadfully fractured above the ankle. A child also was struck, but not materially injured.”

Oh good! I was worried we were going to get through the whole year without any morbid tales of terrible injuries caused by errant mules.

I haven’t listed all the overseas mentions I came across. There were many, but mostly in passing commentary about what the army was up to on the Iberian peninsula. They were clearly heavily relied on to transport goods in Europe, and perhaps the reason there are no mentions of mule pack trains here is simply because they were so commonplace as to be of unimportance.

Thursday, 6th February 1812
Bath Chronicle and Weekly Gazette
From an article talking about how Arabian horses are trained to hardihood: “Eighty or one hundred piastrea [sic] are given for an ordinary horse, which in general is less valued than an ass or mule, but a horse of a well-known Arabian breed will fetch any price.”

I won’t reprint the method of training an Arabian horse to “hardihood”, but suffice to say it is deeply unpleasant. I suspect the ordinary horses were very happy to be ordinary.

Tuesday, 17th March 1812
Star [London]
From an article describing topics raised in the House of Commons – the latter specifically relating to Portugal: “There were at least 50,000 British troops employed upon the Peninsula, and the expense was not less than £4000 a day for the mules employed in conveyance of necessaries for that number of men.”

According to the Bank of England inflation calculator, that’s £286,616.35 now! This topic was much talked about, with the London Sun stating that each horse cost the country 5s. per day, and the London Courier and Evening Gazette stating that the expense of “transporting the heavy artillery to the siege of Ciudad Rodrigo was not less than £20,000.”

Tuesday, 31st March 1812
Sun [London]
In Volume 4 I recorded the story of the Queen of Portugal, whose mules bolted towards the sea and were thankfully arrested in their flight by a courageous British sailor – this story is reported again here, although with some extra details. We are told the carriage was being drawn by four mules; they ran towards a precipice, rather than the sea; and the event took place in South America, which settles that debate! It also states that the mules threw their riders before bolting, so presumably the carriage had postillion riders.

It was originally the Sun who reported the event to begin with, back in July 1811, and although this new version of the story then appears in several other papers throughout March and April, they were also the first to report it in 1812; so is this just them repackaging an old story, or sharing a corrected version? There is no additional info as to the life of the sailor since the 1811 event.

Friday, 1st May 1812
The Scots Magazine
From an article recounting the adventures of “an Itinerant Preacher, of the Fifteenth Century.” It is taken from Monstrelet’s Chronicles, translated by Thomas Johnes Esq. in London in 1810, and tells the story of a friar named Thomas Conecte who was a native of Brittany and travelled throughout France: “In those towns where it was known he intended to preach, the chief burghers and inhabitants had erected for him in the handsomest square, a large scaffold, ornamented with the richest cloths and tapestries, on which was placed an altar, whereon he said mass, attended by some monks of his order, and disciples. The greater part of these last followed him on foot wherever he went, he himself riding on a small mule.”

Thursday, 20th August 1812
Morning Chronicle [London]
From a letter by a gentleman who had been visiting Carthegena and Alicante in Spain: “While I was there, General Harish [?] came with only 1200 men into the Heurta of Mercia [?], and quietly loaded and sent off 2000 mules.” Imagine that many mules being packed up and sent out, all at once!

As usual, I haven’t listed all the sale ads I saw – only the interesting ones.

Monday, 10th February 1812
Salisbury and Winchester Journal
“STOLEN OR STRAYED: two mules, one an Iron-Grey, with several white spots about the body, the other a Brown; both about eleven and a half hands high; the grey very handsome, and resembling a pony. They are supposed to be stolen, as a man was seen riding on a grey mule through Romsey, and a brown one following, on Saturday 25th ult. answering their description. If stolen, a reward of Ten Guineas will be given on conviction, if strayed One Guinea, by applying at the White-Hart Inn, Southampton.”

Friday, 6th March 1812
Stamford Mercury
A “valuable mule” is mentioned in a list of equines to be sold by auction at a farm in Hemingby, near Horncastle. Unfortunately the notice doesn’t elaborate, which leads me to wonder why this mule was specifically described as such! What aspect was considered valuable?

Thursday, 25th June 1812
Morning Chronicle  [London]
“A remarkably handsome thorough bred Arabian mule, 5 years old, 14 hands high, has superior action, rides extraordinary [sic] well, goes in single harness, and is warranted sound, colour bright bay. The above particularly merits the attention of any Gentleman, in want of one of the finest mules in this Kingdom; is lately come from Gibraltar, and parted with solely on the account of the present owner having no occasion for him.”

Wednesday, 19th August 1812
Bury and Norwich Post
“A Brown blood mule, 15 hands high, warranted sound, and free from vice; is a fast trotter, and pleasant in harness. The owner having no further use for him is the only reason of him being sold.”

Monday, 12th October 1812
Salisbury and Winchester Journal
“To be sold: a most beautiful mule, very strong, fleet, and a capital leaper; very temperate and gentle; has constantly carried a lady, has been in harness, and is perfectly staunch to collar.”

The mule was priced at 25 Guineas, whereas a “thorough-broke” Hunter advertised alongside him with no details other than his height of 16 hands and his breeding (“got by Expectation, damn by Sir Peter) was 60 Guineas, and “an old cart Horse” – advertised only as such – was 10 Guineas.

Saturday, 18th April 1812
Stamford Mercury
“JANETTO, A MALTESE STALLION ASS: Will cover mare’s this season, at Mr. Samuel Haire’s, Conniston, in Holderness, at Five Guineas each mare. Janetto is dark brown, stands fourteen hands high, is full of bone, and six years old; he was used as a stallion at Malta, and was allowed to be the best Ass on that island, where mules got by the same breed as Janetto, not uncommonly measure 16 hands.”

I think that “allowed to be the best Ass” probably means something like the head breeding jack; the main one used, something along those lines – but the phrasing makes me chuckle. I think 5 Guineas is approximately £350 today?

Tuesday, 21st April 1812
Kentish Gazette
“Any person wishing to breed a good Mule, has now a favourable opportunity, as there is at the Coach and Horses at Harbledown a remarkably fine Spanish Ass, 14 hands high.”