It’s taken a while, but I am back with volume 4 of British Mules In The News – this time looking exclusively at 1811. There were plenty of mules being listed for sale, but I found far fewer mention of them in day-to-day life.

There were many more mentions of mules being used during the Peninsular War, which I didn’t record here unless there was a particular detail that merited inclusion; we know that mules were used in warfare, and I am more interested in how mules were being used in the UK. There were also many more mules for sale, usually in auctions, but unless they had any interesting features mentioned then I didn’t include them either. 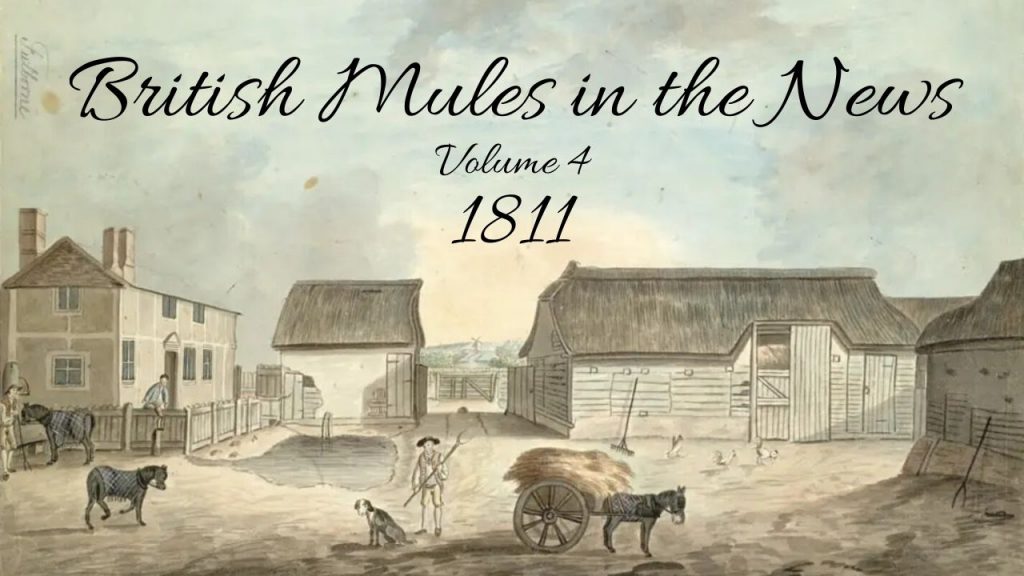 Friday, 25th January 1811
Kentish Gazette
“…The equestrians made a dashing exhibition. The novelties were a lady who rode a beautiful spotted horse with peculiar grace, and the Algerine Plenipotentiary. The latter was richly habited in the Moorish fashion, and mounted on a fine mule.”

From a description of a parade held between Piccadilly Gate and Kensington Gardens, London. An ‘Algerine Plenipotentiary’ is an Algerian diplomat, “invested with the full power of independent action on behalf of their government”. I feel sure you’re all better read than me, but just in case that stumped you as well…!

Thursday, 14th March 1811
Morning Chronicle [London]
“On Saturday last, the Commander in Chief, accompanied by the Quarter-Master-General, the Adjutant-General, and a number of other Generals and Staff Officers, and the Commisionary in Chief, inspected in front of the Royal Military Asylum, Chelsea, a portable forge, which had been made under the directions of Col. Hamilton, of the Royal Waggon Train, and which met with his Excellency’s entire approbation. It is constructed so as to be transported on the backs of mules, and can accompany the cavalry in all situations where the roads are impractical for wheel carriages. The whole weight of the forge, cases and packsaddles, amounts to 351 lb. and this, divided between two mules, can be conveyed with certainty and celerity – a circumstance of the greatest importance to the cavalry and artillery serving in the Peninsula, where so many horses have been rendered serviceable, from the want of the necessary means of having them shod.”

That’s 25 stone, so 12.5 stone per mule – or the average weight of a rider. This seems incredibly light given the tremendous weights army mules were usually saddled with!

Not an actual mule of course, but I was struck by such a curious description and thought it merited inclusion. Mules have narrower feet than horses; is that what they meant with their ‘long like a mule’ description, or was it assumed that mules would have long toes? I feel like it must be the former, as surely long toes – like a long tail – would be easily trimmed.

Saturday, 29th June 1811
Norfolk Chronicle
“…Thence to Mr. Bullen’s farm at Longlands, where a machine for breaking rape-cape, (two tons per day) worked by a mule and one man, was exhibited.”

From a write-up of the 1811 Holkham Sheep Shearing agricultural festival. Always great to see evidence of mules being used to work the land, particularly in my homeland of East Anglia!

Tuesday, 19th April 1811
Chester Courant
“…After having taken a general survey of this pleasant little village [Porta de Estrella], and observed the manners and the customs of the inhabitants, we took mules curiously furnished with large saddles (manufactured here) with pistol pockets[?], great large stirrups of brass, leopard skins, &c. and set out from the village about 10 o’clock, and it certainly would not have disgraced the pen of the most celebrated genius in Europe, to have described our party thus equipped.”

From a description of a “journey of pleasure”, taken by a traveller known only as G. along with his brother and friends, from the harbour of Rio de Janeiro. He requests inclusion in the newspaper due to “Knowing several families in Chester, and ther adjacent neighbourhood, have sons in that part of the world”.

Tuesday, 19th April 1811
Chester Courant
“Some curious occurrences happened on [the French army’s] retreat: in one house they had placed all the china around the table, as if for dinner, with knives and forks, and had put in the centre, on a large plate, a mule’s head, unskinned, with a label in his mouth, with this inscription, “Pour Mons. Jean Bull.”

From the description of an officer of the 14th Dragoons. Not very pleasant but a strangely evocative image; there was also mention elsewhere of the French army burning villages and hamstringing mules and donkeys as they retreated; and a description of a particularly vile Spanish game involving a live sheep, which I won’t go into detail about, but the riders were all mounted on mules rather than horses which I thought was interesting. I am sure the British army also did some bloody horrible things, but as I’m reading British papers, it’s unlikely I’ll hear of them.

Thursday, 18th July 1811
Sun [London]
“We stated yesterday the arrival of the Portuguese brig San Manuel, from Rio de Janeiro, after a passage of 75 days, the Captain of which relates the following circumstances: As Her Royal Highness the Princess Regent [of Portugal] was riding in her curricle, accompanied by a lady, the mules suddenly became unruly, and ran towards the sea, but fortunately they were met with and stopped by an English sailor, and Her Royal Highness and consort were preserved from injury. In consequence of the heroic conduct manifested by the British sailor, he has since been released from the service, and a pension given to him for life.”

I’m a little unclear as to where this event happened, though I’m assuming that their use of ‘English’ and ‘British’ to describe the mule-wrangling sailor means that they were probably abroad. A curricle was a light, two-wheeled chaise big enough for two people.

This from a list of stock being sold off at auction in Beelsby, Lincolnshire. Now, there have definitely been recorded cases of mules giving birth, but it is still an undoubtedly rare occurrence; and the existence of this miraculous animal seems to have been delivered in a rather blase way here!

My assumption is that the clue is in the description and that a “funnel mule” (it’s definitely ‘funnel’, rather than ‘sunnel’ with a medial s) is not what I think it is. But what is it? She is listed at the end of the horse section, before the donkeys, and the ‘foal’ and ‘yearling’ terminology seem to confirm that she’s definitely equine. After asking around, I was told that in the 1895 ‘Musings Of Moorland And Marsh’ by Samuel Wills lists a funnel mule as “being by a jack” i.e. not a hinny (many thanks to Kat B for this information). So do we have evidence of a miraculous foal-bearing mule in Lincolnshire, or was this just a horse with big ears?

Sunday, 16th March 1811
Norfolk Chronicle
“A handsome gig and harness, with lamps, cushions, apron, and a fine mule, quite gentle in harness and a good goer.”

Wednesday, 27th March 1811
Hereford Journal
“A remarkable find [sic] handsome mule, very temperate and tractable, has been used to carry a lady, and will go quiet in harness.”

Wednesday, 29th May 1811
Morning Post [London]
“A beautiful mule, nearly fourteen hands high, bred from a Spanish ass, and nearly thorough-bred mare, 5 years old, very gentle, and has been ridden by a lady, will beat most horses trotting and galloping, is now about to be broke to harness.”

Saturday, 20th July 1811
Morning Post [London]
“A handsome mule, four years old, by a Maltese Ass, out of a well-bred mare; a good figure; trots remarkably fast; has never been backed; is gentle and free from vice.”

Saturday, 2nd November 1811
Morning Post [London]
“A remarkably handsome iron grey mule, brought over from Portugal by the last convoy, from the stud of the Marquis de Abrautes, about fourteen hands and a half high, a good goer, very powerful, and well broke; quiet and free from vice.”

Monday, 25th November 1811
Salisbury And Winchester Journal
“Four capital young good-sized mules; they work well together, are warranted sound, and, to prevent trouble, the lowest price for the four, 64 guineas.”

That’s roughly £5,200 according the the Bank of England’s inflation calculator (which goes back to 1209!).

This is not related to mules at all, but I came across an exhibition of exotic animals on display in Exeter and found it so bizarre and interesting that I had to mention it here. As well as a quagga, and more ‘normal’ animals such as tigers, hyenas, leopards, and a condor, they also had: