These volumes are getting shorter and shorter – but for the sake of brevity, I thought I’d keep this one to a single year! Some more mule-related highlights found while looking through the National Newspaper archives. 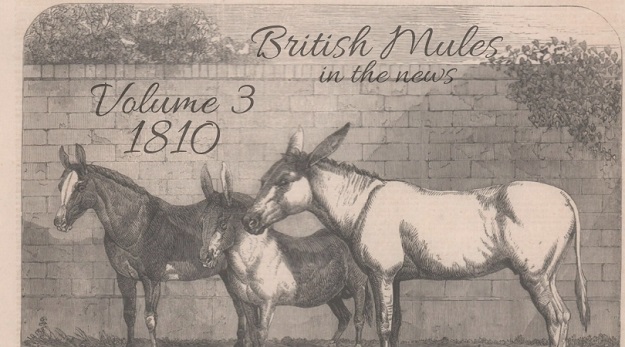 Saturday, 3rd February 1810
Norfolk Chronicle
“[On the 18th ult.], in his 76th year, deservedly respected and lamented, Mr John Mitchell, of New Houghton, in this county. His favourite mule (now 34 years old), at the request of the deceased, went in procession to the grave and was to have been shot immediately after his return, but after the humane intercession of his granddaughter, Miss Young, the life of this excellent animal was saved, with a promise never to suffer it to be again used.”

Saturday, 3rd February 1810
Norfolk Chronicle
“One day last week, as a gentleman’s servant, mounted on a mule with a little boy behind him, was riding along King-street, the animal’s hind legs slipped upon a broken piece of ice, by which they were violently thrown off behind, the man falling upon the boy with his right foot hanging in the stirrup; fortunately the animal immediately stood still til the man extricated himself from his perilous situation, and no other harm occurred from the accident but the lad receiving a slight concussion on the head.”

Saturday, 7th April 1810
Carlisle Journal
“To cover this season, 1810, at the New Inn, Templesowerby, at 10s. 6d each mare, a beautiful Sicilian ass; stands thirteen and a half hands high, and has wonderful strength and action. He was imported into this country in 1807; and was then three years old. Mules of his get may be seen in the neighbourhood, which have been deemed by judges to be innately superior to any of the kind in this kingdom.”

Wednesday, 18th April 1810
Bury And Norwich Post
“Conveyed to the Norfolk and Norwich hospital on Saturday last: Thomas Garrrod, of Happing, who, in passing through White Lion-lane on Saturday morning, was severely bitten in the knee by a mule.”

Saturday, 30th June 1810
Norfolk Chronicle
“On a summerly at Longlands, fine as a garden, Mr. Shepherd’s Northumberland Drill, drawn by a mule, was seen at work, depositing oil-cake dust and turnip seed on the tops of the ridges of the land, which was previously ploughed with deep furrows, into which short muck was thrown, and afterwards covered up by women with hoes, on the Northumberland system.”

This was from a very long article about Holkham Sheep-shearing, an annual agricultural festival, that otherwise did not merit inclusion for the purpose of this blog – but I thought the mention of a mule being used for farm work was an interesting one, and worth preserving.

Saturday, 22nd September 1810
Northampton Mercury
“William Smith, the gipsey, convicted at the last January Sessions, held at Aylesbury, Bucks, of stealing a mule from Bewdley Forest, and ordered to be transported for seven years, has made his escape from on board the Hulks, at Woolwich. A reward has been offered for his apprehension.”

Friday, 23rd November 1810
Stamford Mercury
“Last Friday morning as a cart (drawn by a mare and a mule), belonging to Mr. Sutton, of of Wragby, was going towards a wharf, near Brayford, the water having covered the road, the driver got upon the mule (the mare was in the shafts), when unfortunately in making a difficult turn, the mule having stepped too far, walked into the river, drawing after it the mare and cart: the man kept his seat, but the current being very strong, the traces broke, and the mule and rider were driven by the force of the stream through the High Bridge, and got out safe the other side. The mare, though confined in the cart, to the astonishment of the spectators, was safely landed at the Swing Bridge, a distance of about 200 yards.”

Thursday, 26th July 1810
Bath Chronicle and Weekly Gazette
“As the summer advances, the low plains on the coast of S. America become parched with excessive heat. The grass withers to the roots, and the soil turns hard and baked. The cattle, enveloped during the day in clouds of dust, run panting with oppressive thirst. The more sagacious mule, with his hoof cautiously thrusting aside the prickles of the water-melon, sucks a refreshing beverage.”

Not British, but an interesting example of mule ingenuity.

Saturday, 8th September 1810
Royal Cornwall Gazette
“…Lord Wellington likewise knew that when the French were last in Portugal, the mules, by which it was attempted to bring corn to that country from France, were obliged to be knocked in the head on the road, after having emptied the sacks they carried to fill their bellies.”

From a longer letter explaining how Wellington knew that, if the French were to march on Portugal again, they would need to do it immediately after the harvest.

Wednesday 17th October, 1810
Evening Mail [London]
“…In many places the roads [from Buenas Aires to Lima] are so narrow that the mules have scarcely room to set their feet, and in others it is a continual series of precipices. These paths are full of holes from two to three feet deep, in which the mules set their feet, and draw their bellies and the rider’s legs along the ground.”

“…The danger is, however, great; where these holes, or camelones as the Spaniards call them, are wanting. For the tracks are extremely deep and slippery, in general chalky and wet … In descending these places, where there are no holes or trenches, and which are sometimes several hundred yards deep, the instinct of the mules that are accustomed to pass them is admirable. They are sensible of the caution requisite in the descent. On coming to the top of an eminence, they stop, and having placed their fore feet close together, as in a posture of stopping themselves, they also put their hind feet together, but a little forward as if going to lie down. In this attitude, having, as it were, taken a survey of the road, they slide down with the swiftness of a meteor. All the rider has to do is keep himself fast in the saddle, without checking his beast; for the least motion is sufficient to disorder the equilibrium of the mule, in which case they must both inevitably perish. The address of these creatures is here truly wonderful, for in this rapid motion, when they seem to have lost all government of themselves, they follow exactly the different windings of the path, as if they had before accurately reconnoitred, and previously settled in their minds, the route they were to follow, and taken every precaution for their safety, amidst so many irregularities. There would indeed otherwise be no possibility of travelling over such places, where the safety of the rider depends on the experience and address of his beast.”

“…It is really wonderful to observe the mules, after they have overcome the first emotions of fear, and are going to slide down the declivity, with what exactness they stretch out their fore legs, that by preserving a due equilibrium they may not fall on one side, yet, at a proper distance, make with their bodies that gentle inclination necessary to follow the windings of the path; as well as their address in stopping themselves at the end of their impetuous career. The human species could not show more prudence or conduct than the mules do, and some of them, after being long used to these journeys, acquire a kind of reputation for their skill and safety, and are accordingly highly valued.”

Friday, 7th September 1810
Saunders’ News-Letter [Dublin]
“SPANISH MULE TO BE SOLD. Beautiful Spanish Mule, the property of a Gentleman lately returned from Spain, warranted perfectly gentle, and free from any kind of vice, principally adapted for the saddle, and said to exceed in beauty any ever brought to this country; he is seven years old. To be seen on Monday, the 10th day of September, at the Stables of Veterinary Surgeon Watts, Aungier-sreet.”

Saturday, 9th June 1810
Morning Post [London]
“By Messrs. Tattersal, on Monday next: A remarkably handsome and strong mule, only eight years old, an excellent Hackney, runs quietly and well in harness, has carried a Lady, and warranted sound.”