When we got Marty, he jumped over the partition in the lorry and got stuck (twice). After the second attempt, in the middle of Dartmoor and without enough fuel to do anything other than travel at least as far as the next petrol station, I opted to stay in the back with him. We got fuel, decided to keep the mule after all, and drove the remaining two hundred miles with me standing in the groom’s area. I sang every song in my vocabulary (and some that weren’t) to him for the entire journey.

I do not recommend this as a way to bond with your mule.

However, it did have an affect. I’ve obviously put more sensible work into building a relationship with him since then, but I regard that lorry journey from hell as the catalyst. Although I often consider Marty to be some kind of eldritch punishment sent to torment me for sins committed in a past life, we do have what could loosely be called a “good relationship”. I can do things with him that no one else can, and this has absolutely nothing to do with skill levels; he’s picked me as his human and I have managed to prove myself at least partially worthy of this honour.

Xato is more a work in progress, which may surprise you. Out of the two of them, you would be forgiven for thinking that it was Xato who I shared a fairytale romance with; and although he is a big hunk of angel cake who genuinely seems to like me almost as much as I adore him, I have not yet proved myself as someone capable of being there for him in a crisis. When he gets worried and doesn’t know what the answer is, his first thought is still to leave rather than stick with me. Not always, but most of the time. That’s fine. Before me he’d had the same human for his entire life, and I’m still a new face; he doesn’t know if I’m qualified yet!

So how can you build a bond with your mule? Well, you could try assimilating yourself into their culture: 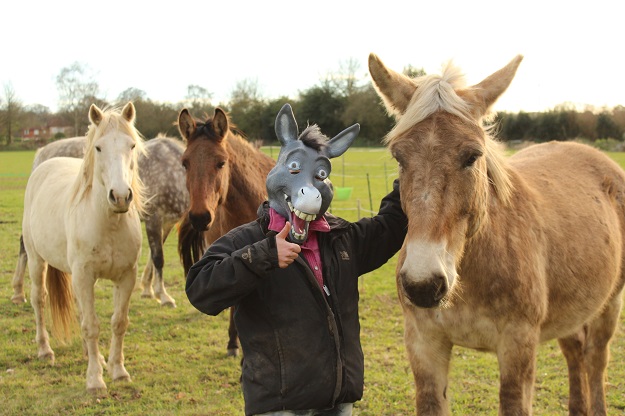 The thing about building a “bond” is that it is not something separate to everything else you do with your mule, horse or donkey. It always perplexes me when people ask “What things can I do with my [insert equine denomination here] to build a bond?”. It’s not about playing games or giving treats, although I won’t deny that those things can help – but there needs to be a foundation. What your mule really needs from you is consistency, fairness, and the ability to step up and take command of a situation. You need to prove that you can keep them safe, offer them clarity, and listen to their opinion; and you need to be ready to say no. Both horses and mules require these things, but it’s easier to get by with horses whereas mules will flat out refuse to work with you if you don’t meet their expectations.

Essentially, if you’re looking to build a relationship with your mule, it’s not so much what you do with them but rather how you do it.