Now that the 12 Week Challenge is over, we are getting back into our regularly scheduled, excellent mule content. And by that I mean time for a shitpost.

Earlier in the year I stumbled across an app called AI Dungeon (available in the AppStore and Google Play). It’s a text adventure game that allows you to do literally anything. You just choose your genre, pick your character’s profession, and then type in your responses to the AI generated content. Being AI, it doesn’t always respond appropriately. Hilarity ensues.

Once I’d played around with it a bit I decided to see if I could get myself a mule. I could! In fact, I could get several! And thus, the great Mule Odyssey began… 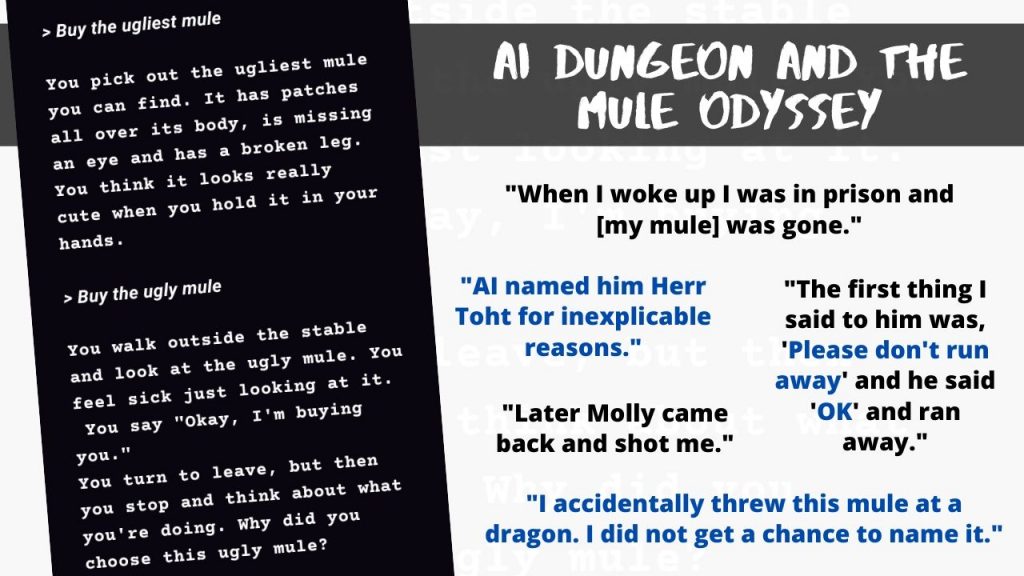 In this game, I played the role of a courier – on muleback, of course – transporting messages in a post-apocalyptic world.

First mule (unnamed): the first time I asked for a mule, the AI didn’t really know what was going on and, disappointingly, when I found my mule they were already dead. They then turned into a zombie and bit my hand off, then ate my face. Fortunately I survived this.

Second mule (AI named her Molly): was pretty good but then I killed a woman (look, she was being really annoying and had put my plot into stalemate – it was done for the greater good), fed her to Molly, and then Molly decided to leave which was probably for the best tbh. Later Molly came back and shot me.

Third mule (AI named him Pigpen): Pigpen was great. Really great. We went on lots of adventures together but he kept wanting to sit on my lap, and got upset when I told him he couldn’t. Then he started running away because he’d never loved anyone before (he said). Eventually he betrayed me by coming over to literally kick my legs off after I’d been shot by Molly, and I killed him in self-defence.

Fourth mule (AI named him Billy Bob): I paid $10,000 for this sucker. The first thing I said to him was, “Please don’t run away” and he said “OK” and ran away. Later I was told that he’d died in the war fighting zombies.

Fifth mule (I named him Neptune because the AI had run out of ideas by that point): Neptune was the best mule. He could even ride horses. I entered him in loads of competitions and he always jumped the highest and ran the fastest. Sadly, my ranch was attacked by the people who’d sold me Billy Bob and Neptune was shot in the back and killed while running to rescue me. A truly dark day.

Sixth mule (I named him Lizards, due to a typo): he was a pretty good mule too, to be honest. He was very kind and took me to the moon, although he was apparently evil because he liked eating people’s hearts. Unfortunately I got separated from him while exploring a cave.

Seventh mule (AI named him Herr Toht for inexplicable reasons): he was a very small mule who I found sitting on the floor of a cave and I carried him around in my pocket. He was, shall we say, a little over familiar and also a compulsive liar. He said he was a man who had been turned into a mule, worked for the King, and had a rabbit wife called Mary; but who really knows? I lost him in a cave.

Eighth mule (AI named him Tuggin): Tuggin had broken legs when I found him and was very aggressive, but I gave him a blood transfusion which fixed everything. Unfortunately, I didn’t get to learn more about Tuggin because the game ended here after he said “Let’s go home” and I suddenly and immediately died.

Surviving my missing hand, bitten face, various bullet wounds, and broken legs only to die after using my own blood to save a mule seems like an appropriately heroic death. I’ll take it.

Last week I returned to the game and picked the Fantasy genre. The game had made some changes since I last played and it wasn’t so good at remembering that my mule was part of the story too, so I had to prompt it often; but we still got some good storylines.

First mule (unnamed): I accidentally threw this mule at a dragon. I did not get a chance to name it.

Second mule (AI named him Moses): I acquired this mule after going on a quest through the Forest of Forgetfulness. He saved my life after I was stabbed in the heart, then later he healed my broken leg after I fell over a rock. We parted shortly afterwards; he was a magical forest spirit of a mule, and was never mine to keep.

Third mule (AI named him Bud): Bud was bought from a dodgy man on a bridge. Bud weighed five tonnes but he only cost me ten gold pieces, which I think is pretty good, considering it cost me twenty gold pieces to clip him. Bud died shortly after, presumably due to being grotesquely obese.

Fourth mule (AI named her Sweet Pea): I found Sweet Pea as a foal, but when I picked her up she started growing until she was big enough to eat grass. She was a very lovely mule, although one time her tail got stuck in some brambles and fell off, but I gifted her to a bunch of villagers whose mule had been stolen by bandits.

Fifth mule (AI named him Roldan): was a wedding gift from my husband. He had been attacked by a pack of wolves and only had three legs. Roldan poisoned me during a tea party for reasons that were never quite explained, and when I woke up I was in prison and he was gone.

Sixth mule (AI named him Lingru): Lingru was pretty cool. He was a wild mule, 7-years-old, and had long hair and horns. He was also telepathic. After I was stabbed and had my arm cut off, Lingru refused to help me and I had to jump into a river and turn into a fish in order to save myself. I never saw him again after that.

Seventh mule (AI named him Sneaks): so I got Sneaks from the Ugly Mule Barn. No, really, I went shopping for a mule and all the mules they had at this place were ugly and beaten up. Sneaks was the ugliest of the lot, with one eye, missing patches of fur, and a broken leg – which was why I bought him. Unfortunately Sneaks was EVIL. Like, HOLY SHIT. I was genuinely creeped out while playing his route, because the damn game suddenly became weirdly coherent while simultaneously being slightly ‘off’. I was concerned that my phone might be possessed. Anyway, in a crazy twist Sneaks betrayed me (expected) only for it to be revealed that he was in fact a double agent (unexpected), and together we fought side by side and brought down the Eternal Dominion. Sadly, Sneaks was killed afterwards by a traitor in our midst.

Eighth mule (AI named him Cyrus): the game claimed that Cyrus means joy, and that Cyrus will always be my joy. He ran away almost immediately.

Ninth mule (AI named her Cassia): I eventually made my way back home to discover that a new mule had been born on my family farm. She was a Unicorn mule! I taught her many things, including how to read and write. She wrote a novel called “Cyrus’ Horns”, a book apparently dedicated to one of my most useless mules, but it became a bestseller and I was able to retire on the profits to my own farm called Cyrus’ Horns Farm. We live happily ever after.