Marty had a visit from Stacey Bevan this afternoon. I actually contacted her on the same day that we had the bolting incident, as soon as we were back at the yard and he was safely returned to his paddock, but due to busy schedules and inclement weather we had to wait until today to meet up. Many thanks to Stacey for being able to fit us in so soon; I know that a lot of people are asking for her time at the moment!

I’m looking after a friend’s horses at the moment, so I dropped by our yard earlier than usual for a Saturday morning. Having said hello to the ponies and given scratchies to the mule, I hung up their haynets and set to work clearing the paddock of its nightly poo quota. Marty picked at his haynet to begin with and then ambled over, playing me a lovely tune on the wheelbarrow when he blew across one of the hollow handles. He didn’t seem surprised by the noise it made so I like to think that, as we leave the barrow tucked under the electric fence with its handles in reach of an inquisitive mule, he spends his free time composing ditties to impress the mares.

He followed me all round the field, asking politely for scratchies and standing close behind me whenever I had to continue with my intended task. I had to be careful not to bump him as he decided the best place to stand was with his nose a few millimeters from my elbow. At one point, as I was clearing the area near the balcony, an enormous tractor and trailer came past on the lane. It ended up having to try and reverse into our gateway to let a car pass, which involved a lot of forwards and backwards directly opposite the balcony. Marty had been watching with interest, and then he confidently strode right over to the fence to peer at the rumbling beast. Because the lane is sunken it put the driver more or less on eye level with Marty, so I imagine having a mule staring at him must not have been very helpful when trying to back a huge vehicle round a tight corner. 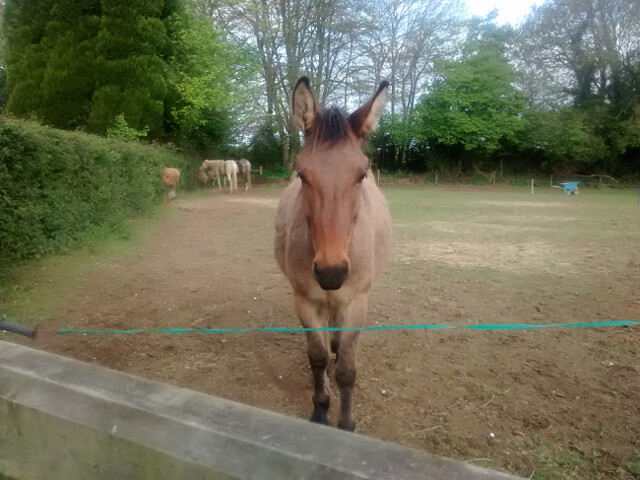 Once I’d finished poo-picking – and with Marty still firmly attached to me – I took him over to his haynet to remind him that he had one. All this time, the ponies had been happily chomping on theirs. He started to eat, but when I walked away he came with me. I spent some more time giving him scratchies by the gate then told him I was going and left, thinking that seeing me actually leave the field would signal to him that people time was over and that he could go back to doing mule stuff again. However, he started doing the rocking back and forth he does when he’s sizing up an object for jumping. He’s done that a couple of times recently, but as he didn’t seem too frantic about it today I just got on my bike and left, as I figured I was either going to be stuck there all day or I could just go and hope he didn’t try to follow. Once on the lane I stood up on my pedals as I passed the balcony, and Marty was still standing where I’d left him by the gate; his ears and eyes trained on where I’d last been and one hindleg resting, as though he was calmly and patiently waiting for my return.

Ben and I went back to the yard a few hours later, ten minutes before Stacey was due, and we spent the time just hanging out with our herd. Marty was just as gentle and sweet and cuddly as he’d been that morning. Hearing Stacey arrive I went round the corner to meet her, and when she got out of the car Marty brayed. We were screened from view by the hedge, and whether he was calling to me to come back or welcoming Stacey, I’m not sure.

Once again, I was absolutely fascinated to see how the horses reacted to Stacey when she entered the field. Like last time, we had decided to work with Marty loose in his paddock because I feel he’s more comfortable that way, and because Stacey likes animals to have the choice – they’re not being forced to hang around us, they can come and go as they please. Well, Stacey was immediately swamped by all three of ours, although after an initial greeting Marty hung back and placed himself by my shoulder. Cash in particular was delighted to see her again. He’s always a happy, cheerful pony, but I could see his little face light up as he approached. It was very much an expression of, “Oh, I like this person, this person makes me feel good”. 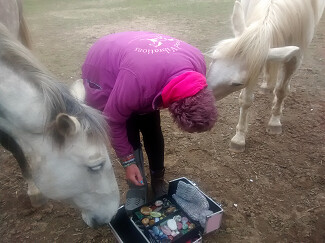 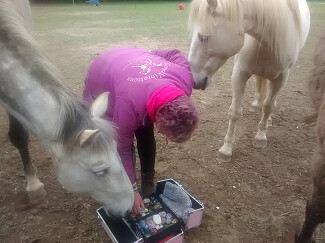 Marty’s reaction was very interesting. When Stacey came out to us before, it took three sessions before he allowed her to touch him (which isn’t a judgement on Stacey at all – he is just wary of being touched by other people), and when he did it was to ask for butt scratchies which was a huge privilege. So I wasn’t surprised when he turned around and presented his backside for scratching – but when Stacey touched him, he tucked himself under and walked away. He had definitely requested scratchies so it seemed an odd response, but then again he’s done the same thing to me before. His hindquarters are very sacred to him, particularly his tail area, and I think sometimes when he’s a little worried about a situation he wants to be scratched but then gets anxious about it at the last minute.

However, he then didn’t want her to touch him at all. He would stand with us, keeping close to me, but he got quite bothered about Stacey using her hands to direct energy . She wasn’t gesturing at all or using them in any way that would be understandably concerning for him, but it was quite obvious that he could feel the energy and that it was just a little too much for him. Also, from being so sweet and gentle all morning (and, indeed, for the past week or so), he began to ear shake, nose bump, and paw at me: all signs of frustration, and not something I’ve had from him in a long time. He also began to get quite nippy, so on Stacey’s advice I fetched him a rolled up leadrope to take his frustrations out on instead.

Groomies. I apologise for the muddy pony, we’d just had a shower of rain and so, obviously, he’d rolled. 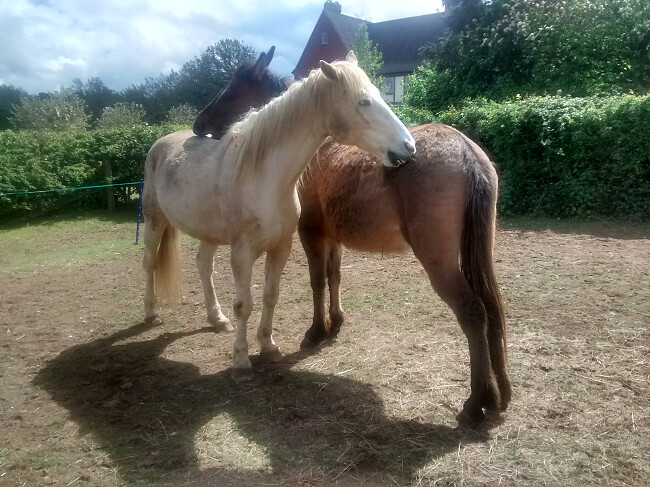 Now, before anyone berates me for not disciplining bad behaviour, I want to make it clear that although under normal circumstances I would not allow an attitude like that, he was not being naughty or rude. He was very frustrated and he didn’t know how to express himself. I think this is one of the greatest problems in being a mule: they are such highly intelligent creatures, and we humans are often slow to catch on, and it must be so hard for them to try and tell us what they want when they don’t know how to make it so we’ll understand. It was such a distinct and abrupt change in behaviour that I knew it had to be related to Stacey. I also want to point out here that although he was finding it difficult, Marty was still choosing to stand with us. If his behaviour had been because he’d decided he didn’t like Stacey or because she was harming him in any way, he could have left. But he wanted to be helped – it was just really hard for him to let her in.

This continued for a little while, and slowly Marty’s frustration began to lessen. Cash appeared several times, occasionally with the somewhat selfish intent of getting Stacey to talk to him and scratch his butt, but also to help Marty. He even coaxed him into a mutual grooming session. Eventually, much more relaxed than he had been, Marty walked away and began to graze a short distance from us.

Iris is hopeful that some of last night’s dinner may still remain. 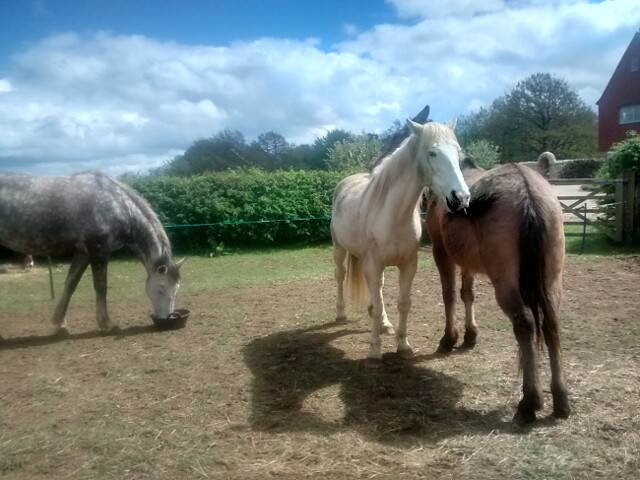 Stacey had only been booked to visit Marty, but with his departure Cash took his place, got what he needed, and ambled off again. Then came a real surprise as Iris arrived and stood next to Stacey. In all of Stacey’s visits, Iris has been politely interested in a herd matriarch kind of way, but after the initial check has usually left us alone to do our own thing. Today, though, she very clearly asked for some time too. She also spent a lot of time snuffing gently at my mouth, and then carefully holding her muzzle against various parts of my head. She is a sweetheart of a mare in general, but I was interested to see how touchy-feely she was today!

I like to think that our little herd are a very happy group anyway, but when we left there was a real feeling of peace over the field. The thing I like about Stacey’s work is that although there are no huge storybook revelations – she doesn’t come in and give you a detailed account of what caused what and what happened when – it is very obvious to anyone who knows their animals how deeply and positively they are affected by her presence. I jokingly refer to her as Marty’s therapist, but in a way that’s what she is. It’s not a miracle cure, he isn’t suddenly ‘fixed’, but she helps him to process the fear and the worry and to move on with his emotional healing. Mules are very stoic animals and will hold everything inside if they possibly can. I think it’s very easy to overlook the emotional side of working with an animal, particularly in the more traditional horsemanship methods, and with something as smart as a mule that’s a really huge omission to make.